Rydel Lynch: What Girl Power Means To Me!

Girl power is about being true to yourself. Believe whatever you believe in. Wear whatever clothes you want to wear. That's girl power. It shines through in your actions and how you portray your true self. 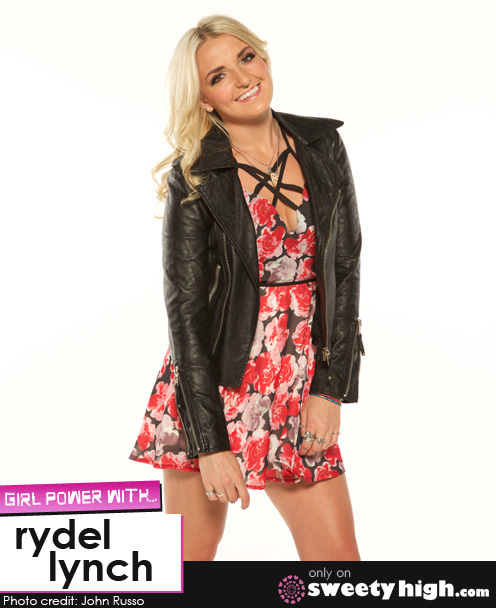 When I think of girl power, I think of Rosie the Riveter, with the bandana around her head and her arm flexed, showing she's got muscle.

Sometimes it's easy to take advantage of girls, especially if they're innocent or naive and they don't know what's out in the world quite yet. I think they just need to remind themselves to always stay true to who they are and stand up for what they believe in. Try not to let anyone push you around, because you are just as important as the person next to you.

I'm sticking up for myself day to day because I live in a house full of boys, and that presents certain challenges. Every day I'm making sure the boys know they're not on a higher level than me, that we're all the same, and my opinion is just as important as theirs.

Being raised with boys has made me tough. I'm a tomboy, and my mom made sure growing up that we were always ourselves. She always wanted us to be best friends and stand on our own two feet and be comfortable in our own shoes. Growing up with the boys has been a good thing and empowered me as a woman.

I think Blondie, Debbie Harry, is a great girl power role model because she was also in a band with all boys as the lead singer and she took control. I think she's awesome. I also think Jennifer Lawrence is amazing. She's one of my favorite actresses, and she she's super confident and she's always herself on red carpets. Sometimes she's goofy and silly and you can tell she's always being herself. She just seems like a really nice person.

I can't say this enough times, but my advice to to girls is just to be yourself, because I know girls struggle with this a lot and it can be a hard thing to do. You have to constantly remind yourself how awesome you are and how grateful you are for the things that you have, and you can't compare yourself to anyone else, because nobody is the same.

I'm not the same as you. We're all different. We all look different and everyone has different personalities. You have to remind yourself to be true to who you are. Things come up and sometimes it's a struggle, but you have to keep climbing the ladder and know that you'll get over those bumps. Keep that little voice in the back of your head that says "You're doing good! You're doing good! Keep going!" and you'll succeed.

Rydel Lynch plays keyboards and sings in the band R5, alongside siblings Ross, Riker and Rocky Lynch and long-time friend Ellington Ratliff. She's also the only girl in the group, so she knows quite a bit about girl power!