Our Definitive Ranking of the Most Heartbreaking Disney Moments

While Disney movies are known for their happy endings, they definitely have their fair share of emotional moments on the road towards happily ever after.

We're not ashamed to admit that we've shed a tear or two while watching some of our fave Disney classics. And in the interest of torturing ourselves emotionally, we decided to take a little trip back through some of the saddest moments in movie history.

Keep scrolling for a definitive ranking of the most heartbreaking Disney moments.

Although it's for her own good, knowing that doesn't make the goodbye scene between Sully and Boo any easier. Although Boo can tell something's wrong, she's too young to fully grasp what's happening. After Sully says goodbye, she runs and opens the closet, only to find that her "Kitty" is nowhere to be found. It definitely had us feelings some feelings about the end of this beautiful relationship. 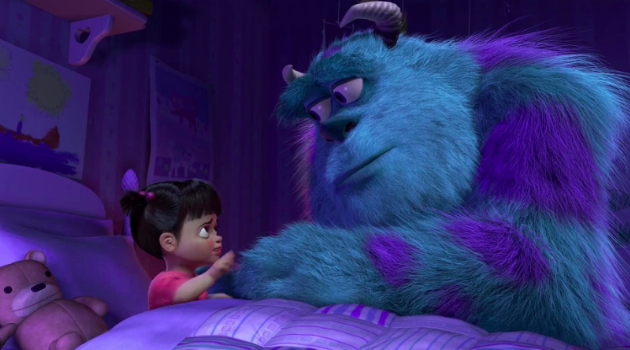 Although this scene is undeniably sad, it's more of a beautiful kind of sadness. John Smith and Pocahontas obviously love each other, but they also recognize that they have to do what's best for them, which means they can't be together. Watching John Smith board the boat and seeing Pocahontas wave goodbye to him from the cliff has us all up in our feels, but we also know it's for the best. 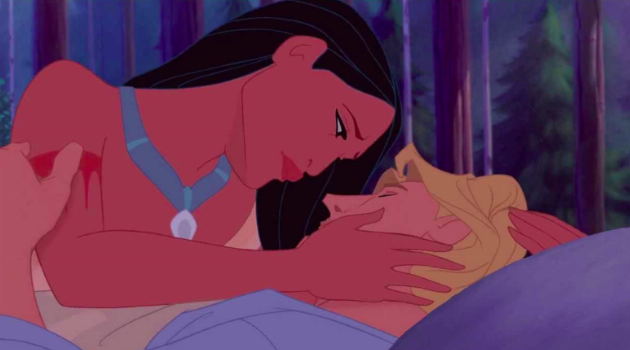 Granted, everything in this scene turns out fine, but for the few moments that we thought all our favorite toys were going to die, we were bawling our eyes out. Watching as they all accepted their fate, joined hands and decided to go down together was absolutely chilling. Thankfully, they were rescued, but for a few moments we really thought it was the end for our plastic heroes. 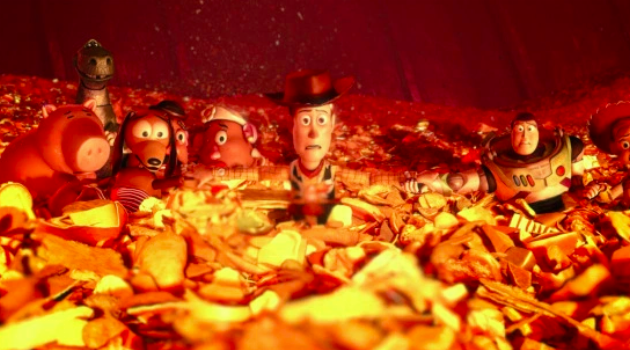 Mufasa's death is heartbreaking in general, but it's particularly upsetting because of Simba's reaction to it. Not only was Mufasa betrayed by his own brother and trampled by a stampede while trying to save his son, but then Simba is told that it's completely his fault. His reaction to finding Mufasa's body and his inability to accept that his dad is actually gone is absolutely gut-wrenching, and we'll likely never get over it. 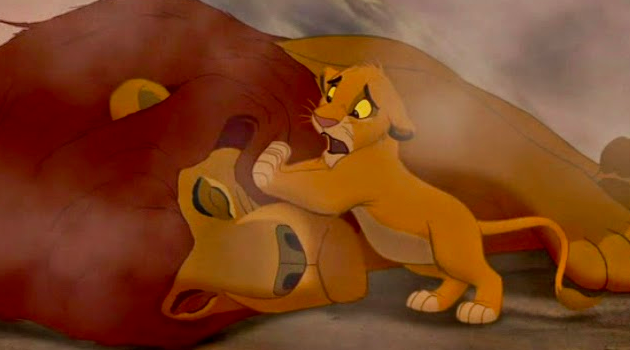 First of all, the Sarah McLachlan song playing in the background of this scene was just unfair. Second of all, who didn't feel overwhelmingly guilty for the childhood toys they outgrew after this moment? We watch Jessie as she bonds with her human, only to be forgotten as her little girl grows up. Then, when Jessie is found under the bed, you can see her excitement as she believes that everything is about to go back to normal… only to be left in a donation box. It was truly upsetting, and it made us want to find all our old dolls and apologize, whether they could hear us or not. 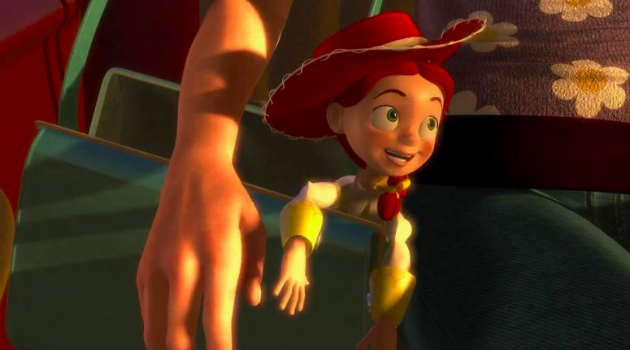 4. Bing Bong Death Scene (Inside Out)

Much like Jessie, Bing Bong is also a forgotten friend from his human's child. In an effort to save Riley, Bing Bong sacrifices himself in order to allow Joy to reach the top of the cliff and establish some order in Riley's memories once again. It's a totally selfless act with Riley's best interests at heart, which makes  it all the more upsetting. His final request—"take her to the moon for me"—had us all shedding a little tear… or an entire waterfall, same difference. 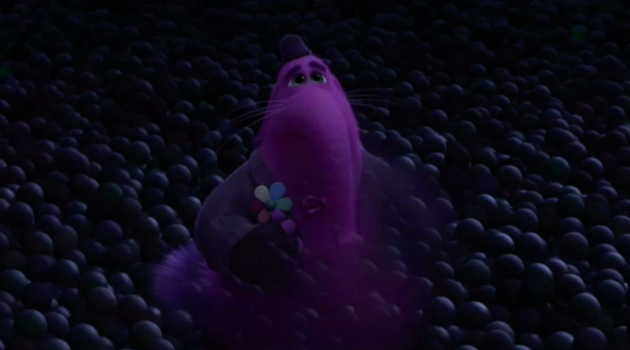 (Inside Out via Walt Disney Pictures)

3. Widow Tweed Gives Up Fox (The Fox and the Hound)

The Fox and the Hound is an older Disney classic filled with sad moments, but none are quite heartbreaking as when the Widow Tweed has to give up Tod at the beginning of the movie. After realizing he isn't safe, she comes to the conclusion that releasing him into the wild is the best option. On the whole ride to let him go, she's quietly reminiscing on their memories, but Tod has no idea what's going on. You can see his confusion as the person he loves drives away, and it was absolutely heart-wrenching to watch. 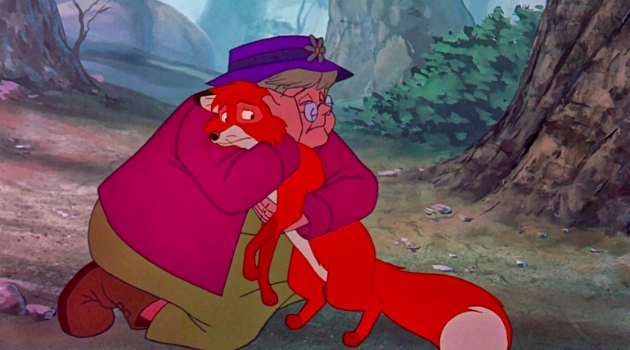 (The Fox and the Hound via Walt Disney Pictures)

Absolutely one of the most traumatic scenes in movie history, the death of Bambi's mother is guaranteed to bring a tear to your eye. Bambi is barely starting to get his footing in life. He has a mother who loves him and wants to guide him through the difficult world, only to have her suddenly stripped away after being killed by a hunter. It's especially upsetting when Bambi makes it back to the thicket and turns around expecting his mother to be right behind him, only to realize that he's lost her forever. If this scene doesn't upset you, you might not have a soul, and that's all we have to say about it. 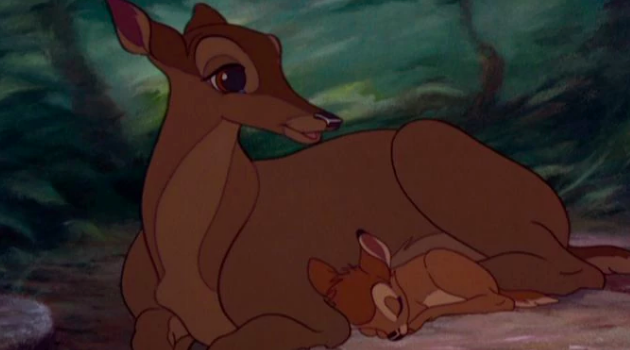 Up starts as such a hopeful and happy movie… and then it just goes right ahead and rips your heart out ten minutes in. You get to see Carl and Ellie living their entire lives together, all the way through to Ellie's death that leaves Carl alone in the world. It was the quickest we've ever gotten attached to a Disney character, and it just felt really unfair that they took that away from us so soon. We understand that their relationship wasn't the point of the story, but it was still incredibly heartbreaking to watch. 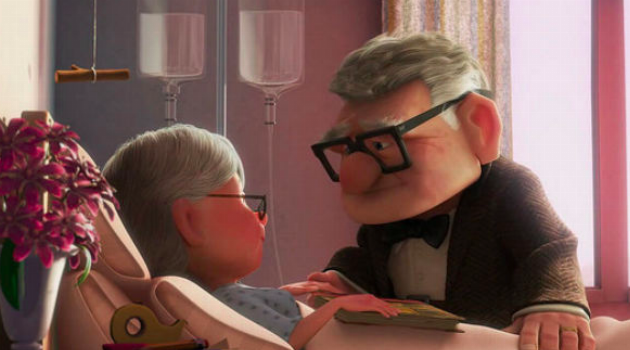 (Up via Walt Disney Pictures)

Looking for more Disney content that won't make you cry? Click HERE for a definitive ranking of the most iconic Disney love songs.