Sara Volz is an 18-year-old student and scientist who won the 2013 Intel Science Talent Search for her work with algae biofuels! 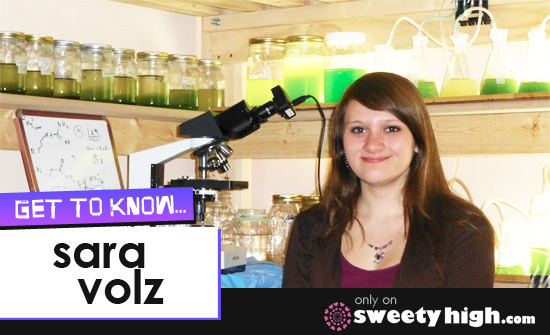 We spoke with Sara to learn all about biofuels, and to hear about Sara's passion for science and what it was like to win the science talent search!

Sara told us that she has been interested in science her entire life.

Her journalist mother and veterinarian father have always been very supportive of Sara's passion for the sciences.

"Growing up I was very into musical theater," she said. "I thought my calling in life was to be in Broadway, and I event went to theater camp and things."

But when she entered her first science fair in middle school, things changed.

"I knew what I wanted to do in life," she said.

She entered her second science fair in the 7th grade. That year, she discovered biofuels, fuels produced by living organisms.

"I looked into biofuels that really fascinated me," she said. "I was looking for a topic I'd be interested in, and I discovered the problem of seeking out renewable energy."

Biofuels are a great source of renewable energy because they are continually made by living things. They're also relatively easy to make.

"You can actually make it at home with vegetable oil on a small scale, without formal lab access," Sara said.

The next year, Sara learned about algae biofuels.

"Algae as a source of oil isn't a new idea," she explained. "The thing is that there are a lot of steps. When you're growing the algae there's lots of troubleshooting. You have to get it to grow how you want in order to extract a lot of oil from the cells."

There is also a conversion process to turn the oil extracted from algae into fuels.

"People are trying to simplify the steps to make it a more feasible choice," she said. "We need to look at the oil production pathways of the organisms to get them to overproduce oil."

This oil derived from algae is a very sustainable way to create renewable fuel, but the process can be expensive.

Sara takes her research very seriously. In her room at her parents' house, she even has a makeshift algae lab.

"In my bedroom at home I've got a loft bed, and underneath I have all these little shelves full of algae," she said.

Close at hand are a microscope, centrifuge, and a few kinds of chemicals.

"I obviously keep the more hazardous stuff downstairs," she said. "It's basically a low-cost environment for me to maintain a lot of cultures."

Sara's research won her the top award in the talent search.

"That was really exciting," she said. "I got to meet the president and spend the week in Washington D.C. with other young scientists."

Since then, Sara has traveled to many places as part of her research and to participate in science fairs. She traveled to Hong Kong in China, as well as throughout the U.S. to places including Los Angeles, San Diego, San Jose, Houston, Pittsburgh, and the nation's capitol.

Currently, Sara is in her freshman year at MIT.

"I'm going to study biochemistry in some combination of majors," she said. "I don't have it all figured out yet, but I'm planning to get involved in a lab here and do more research."

She eventually plans to have a career in academics.

More and more often, girls and women have been winning science fairs and events traditionally won by male entrants. Sara is one of those young women.

"I really do think it's changing," she said. "If you go to these science fairs and events, in terms of my experience, they have been a great equalizer in terms of allowing anyone in regardless of what particular opportunities are offered to them."

However, Sara sees that there are still fewer females in science, technology, engineering, and math, or STEM, than males.

"There's a disparity between boys and girls and I'm sometimes surprised," she said. "I think one of the most important things to counter that is to realize that when it comes down to it, you should just do something you love and not let anything get it your way."

Are you a girl who loves science? Join us at Sweety High and tell us about your own individual experiences in STEM!