20-year-old Savannah Britt is the youngest magazine publisher in the United States, and the great mind behind the fashion and girl power magazine Girlpez. 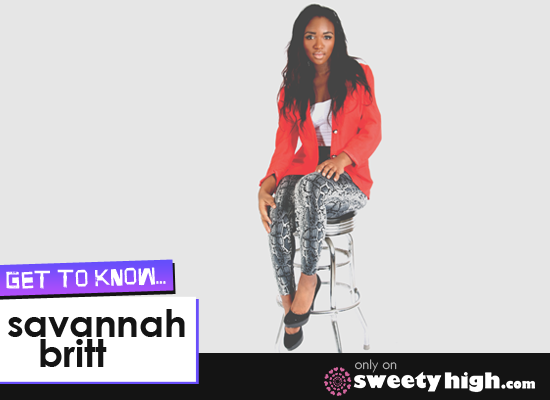 We recently spoke with Savannah about her beginnings as a writer, and how her love for the written word eventually led her to develop Girlpez!

Savannah Britt essentially became a writer the moment she learned how to read.

"Writing has always been a passion for me," she said. "Even before I learned how to read, I would grab my parents' dictionaries and open them to random pages and copy word-for-word all the text from the pages."

Even at the tender age of 4, she had a strong desire to jot down everything that came to mind.

She put her skills to use early in life. She was just 9 when she started writing reviews of children's books for a local newspaper.

"I knew from there that writing would somehow tie into my career!" she said.

But her time writing for them didn't last long, for reasons beyond her control.

"The newspaper I was writing for eventually folded and I was left unemployed at age nine," she said. "From there, I decided to start my own publication, and specifically one that catered to fashion and beauty advice as well as self-esteem development for girls."

Getting her magazine, Girlpez, off the ground took a lot of work. She did lots of research, contacted other journalists, and never looked back!

It helped that Savannah had such a powerful message to get across.

"Girlpez is self-identity met with self-empowerment," she explained. "It was founded as a magazine for girls by girls, as a catalyst to inspire and motivate young girls."

Her inspiration to write comes from many sources.

"First and foremost, I am inspired by my readers: the girls who write in with their inspiring stories, the girls who are touched by my publication, the girls with goals and aspirations — they inspire me so much!" she said.

She's also incredibly inspired by other magazine editors in chief, such as Anna Wintour of Vogue and Amy Astley at Teen Vogue.

"They have paved the way for women like myself and I admire them for providing such wonderful publications for me to follow in the footsteps of," she said.

Savannah's hard work even managed to put her on the radar of one of her idols.

"I would have to say it was really cool to have Amy Astley write me a personal letter and congratulate me on my success," she said. "It was touching to have someone I admire tell me the feeling was mutual."

The toughest part of maintaining Girlpez, Savannah explained, is all of the hard work that must go into it.

"It's not easy to wake up and say, 'Hey I want to make a publication!'" she said. "It requires research, dedication, and hard work to produce a quality publication. At the end of the day, it is very rewarding."

Savannah has recently also branched into the realm of public relations, including image consulting and branding. She's also been working with celebrities, including Milyn Jensen from Bad Girls Club, Kaelynn Harris from America's Best Dance Crew, Smoke DZA and more.

"It's a different side of the industry and a lot of fun!" she said.

She also had a few words of advice for young aspiring publishers and entrepreneurs.

"Do your research and draw out a concrete business plan," she said. "If you stick to your business plan and execute thoroughly you will have a successful business!"

Just as importantly, you should always stay creative!

"At the end of the day, remember to do what you love and always think outside the box," she said. "You must be willing to do things and create things that your counterparts wouldn't do!"

Want to learn more about Savannah Britt and Girlpez? Be sure to check out the social media pages listed below! You can also join us at SweetyHigh.com to start a blog of your own or talk about the young women that inspire and empower you!