The series is inspired by a true story, and follows Dominican reporter Carlota "Cucu" Castelli as she looks back on her childhood in the '80s and her life getting acclimated after immigrating to Miami. The show stars newcomer Savannah Nicole Ruiz in her first major role as Emilia Castelli, Cucu's older sister, with whom she shares a loving but sometimes explosive relationship.

We got the chance to get on a Zoom call with Savannah to talk all about the series, the importance of representation and what it meant to her to have the support of incredible women like Eva Longoria and Zoe Saldaña behind the scenes. Keep reading to discover everything she shared with us.

Sweety High: What can you tell us about Gordita Chronicles?

Savannah Nicole Ruiz: Gordita Chronicles is about a Dominican family that immigrates to America, and you really get to see how they adjust and how they try to achieve the American dream. What I love about the show is that it's about the bonds of family as well as breaking common stereotypes about Latinx people in general.

SNR: Emilia is a bold, confident girl who knows what she wants, but she's also very flawed. She's very concerned about what other people think of her and is always looking for validation from the people around her. That makes her very relatable to a lot of people, no matter where they come from or what their stories are. 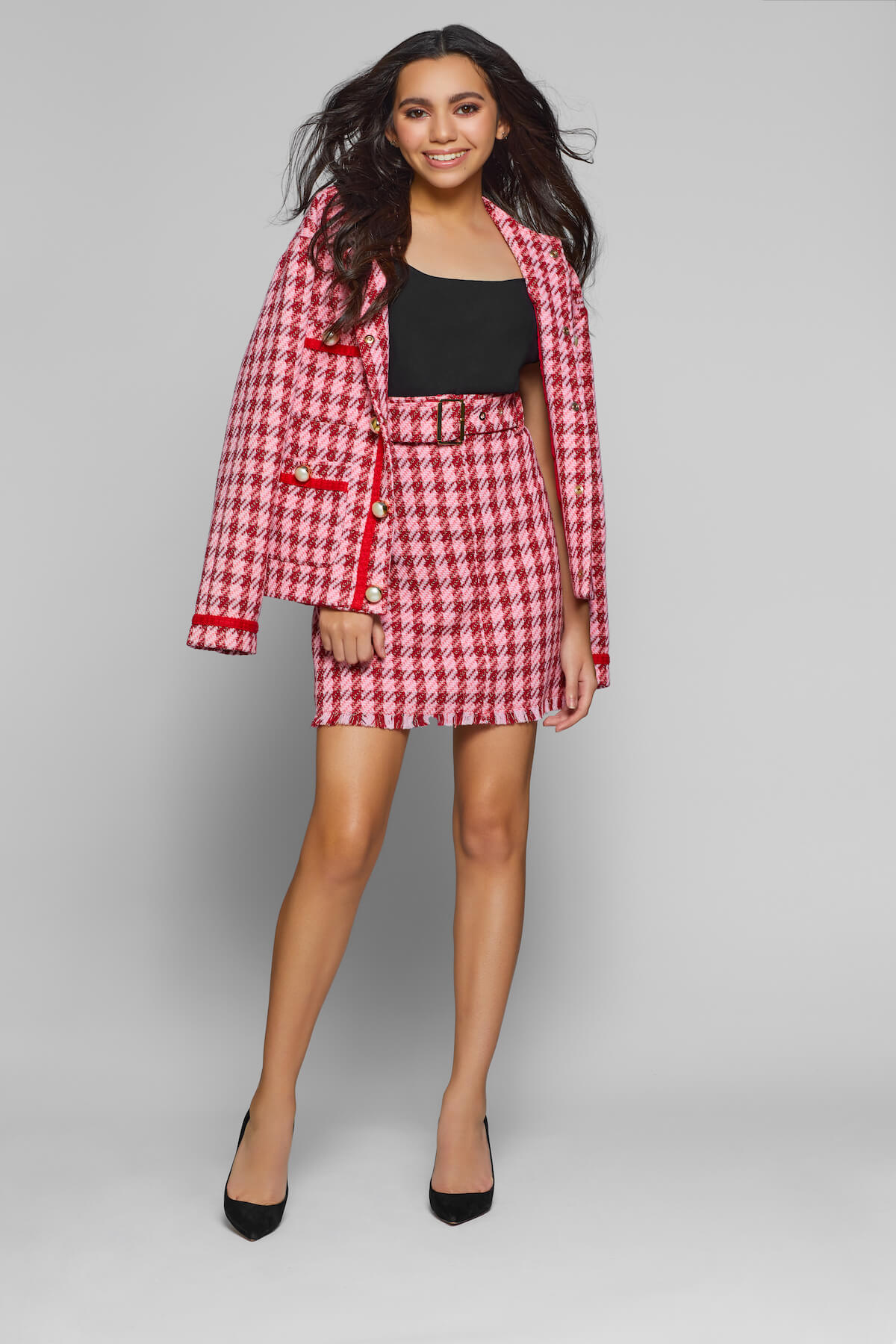 SH: It must be tough for her to be an immigrant in a new country and trying to find her place while also feeling that need for validation. How does she deal with that?

SNR: It's all related, because they're going to this new place. It's new to them and they're experiencing a lot of culture shock. This family tries to blend in in America, but as the season progresses, you get to really see how they break out of that and how they realize you don't need to fit in to be accepted.

SH: Do you have siblings in real life?

SNR: I do! I have a younger brother, so whenever I had to tap into that annoyed older sister role, it was pretty easy. I just had to imagine that I was talking to my little brother.

SH: Would you say your relationship with him is as fiery as the one between Cucu and Emilia?

SNR: It's the same, honestly! He's four years younger than me, so when we were younger, I was the person in power and always trying to tell him what to do. We'd bash heads a lot. As we get older, we're becoming more like friends. We can laugh at the same jokes, and we're almost on the same level. I still think I'm the boss of him, but…

SH: What's your biggest similarity to Emilia? How are you different?

SNR: I definitely see a lot of myself in her—in her flaws, especially. You can see that she thinks the people at her school are the most important people in the world, and that's just not true. I really relate to that because, when you're in middle school or high school, you're surrounded by these people and there's a hierarchy of groups. There are the popular kids. She realizes that doesn't matter, really. She's also really bold and really confident, and that's something that I don't relate to! She's coming from a different place into a new school with a whole bunch of new people, but she's confident and doesn't let anyone tear her down. 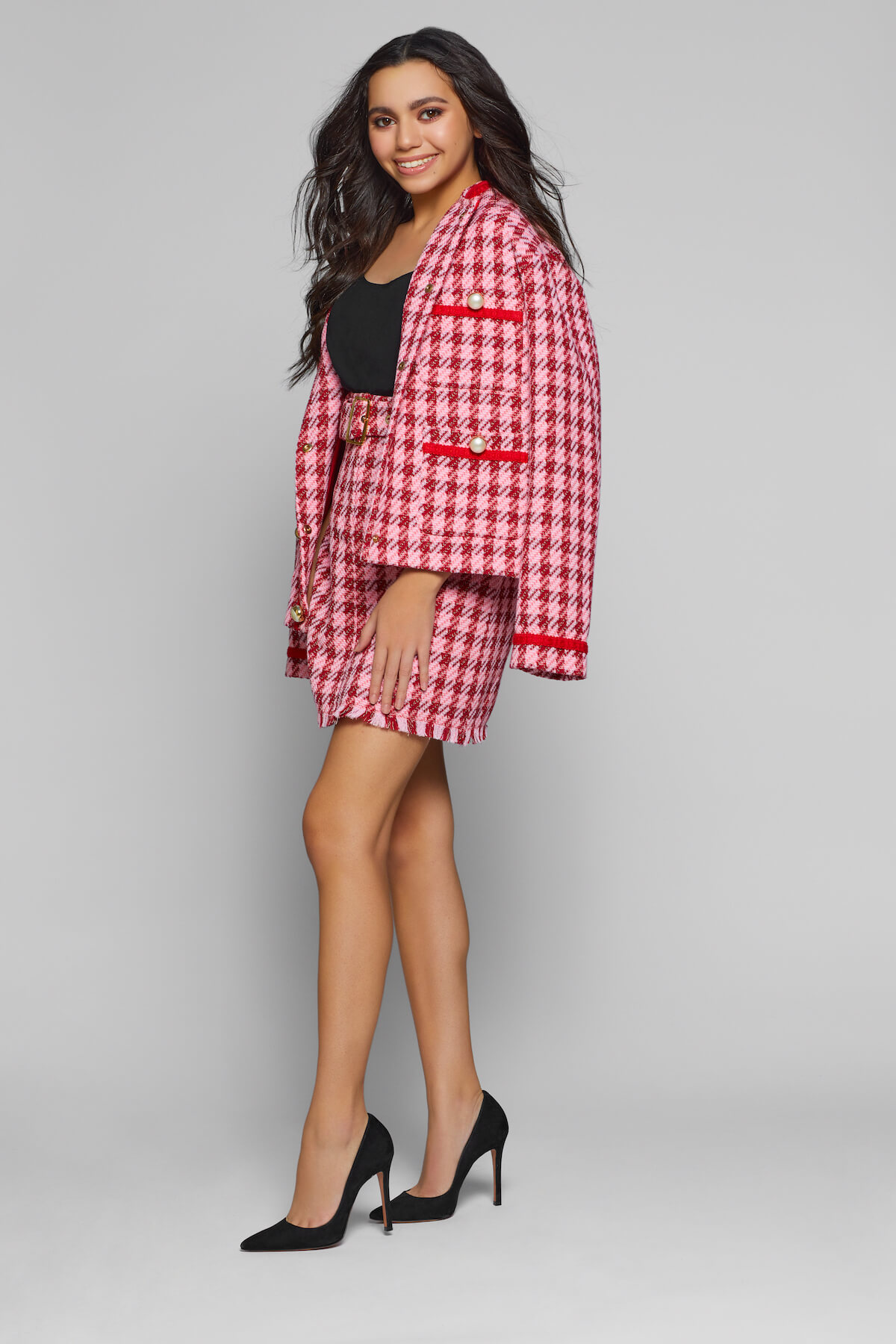 Also read about: The Quarry's Zach Tinker Dishes on the World's Love-Hate Relationship With His Character, Jacob

SH: The Latin-American community is definitely underrepresented in media. What does it mean to you to get to be part of this series that tells this story?

SNR: I'm so happy and so honored to be part of something so powerful and that represents a lot of people. This stuff hasn't been normalized yet and people aren't used to seeing a full Latinx cast—and it's not only the cast, but all Latinx people behind the scenes, too, from the crew to the makeup artists. To have that representation in front of and behind the camera is so important. The industry still has a lot of work to do when it comes to representation, but this is a great start, and I can't wait to see how things play out in the future.

SH: The show takes place in the '80s—what's the coolest aspect of getting to do that kind of time travel in your acting?

SNR: The fashion, I think, really helps me get into character. I'm not Emilia without my eyeliner and my big hair and my shoes matching my top. I have a newfound appreciation for everyone who grew up in the '80s because it's a lot of work to get ready. It's an art form. You have to look perfect, but a different kind of perfect. It's not like today's perfect. Kind of a "crazy perfect" I like to call it. I love getting into character with those aspects. The makeup was so much fun and the outfits were so amazing. It really helped me transport into this different era.

SH: Do you have a favorite memory from the set?

SNR: I can say this without spoiling—anytime I filmed with Olivia [Goncalves], who plays Cucu, my younger sister, was so much fun. I remember one day—I can't say what we were doing—but for one of the scenes, we were both laughing so hard that I had to turn around and face the wall when the camera wasn't on me so that we wouldn't look at each other and laugh. Anytime I was filming with her it was the most fun.

SH: Is it a weird balance to have that much fun with an actress who, onscreen, you're kind of combative with?

SNR: I think it helps to have that connection in real life. We're not afraid to ping-pong off each other for a scene and go full out. If we go from laughing one second to immediately arguing onscreen, we both know it's just acting and it's not serious at all. I got so lucky, not only with her but with the rest of the cast. Our connections are there. This is my first big production, so I don't know how it is on other sets, but with this one, we really are a family.

SH: There are some pretty high-profile people behind the camera on Gordita Chronicles as well.

SNR: We have Eva Longoria and Zoe Saldaña backing this project. It was so crazy, and the whole time I was wondering when they were going to tell me that this was a prank. I booked it and then I found out that Eva Longoria was directing the pilot, and I was like, wait, wait wait—for my first big role, I get to be directed by Eva Longoria? It didn't even feel free. To have those bold and powerful women behind the screen backing this project was so inspiring. I really look up to Eva, and I'm really blessed to have this opportunity.

Love learning all about the actresses behind your favorite stories? Click HERE to read our interview with Siobhan Williams on The Quarry.