Savannah Outen is a young singer from Oregon who has been featured prominently on Radio Disney and even performed in the Macy's Thanksgiving Day Parade! 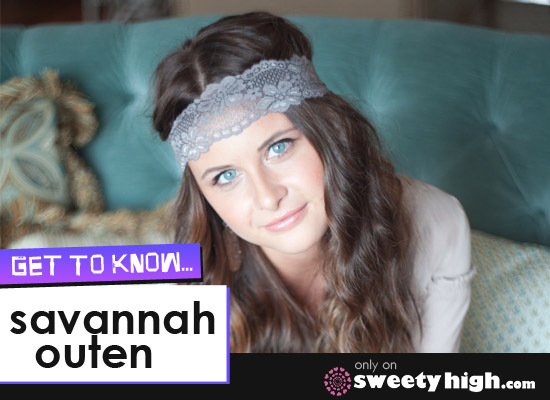 We spoke with Savannah all about how she began her musical career, and how far she has come in such a short time!

Savannah Outen told us that as soon as she could talk, she was singing.

"It's always been something I grew up doing," Savannah told us. "I'd make up songs, put on concerts for my family, and constantly wanted to perform."

Savannah supposes she got her musical side from her violinist mother.

"The most musical thing my dad can do is snap on beat," she said.

She has always known that she wanted to be a performer. Savannah was about 10 when she realized that she couldn't spend a day away from music. She knew it was going to be her career.

She's not just a singer, but also an accomplished guitarist who has now been playing the guitar for more than six years. She also writes her own music.

"I am constantly writing," she said. "The process is always different."

When Savannah comes up with a tune when she's out and about, she'll hum the melody and record it on her phone to listen to later.

"Other times, I'll write down an idea or song title and grow from there," she explained. "That's what is so fun about songwriting. Every time it's a different process."

One of her biggest influences is Canadian singer Celine Dion.

"Celine Dion has always been a huge inspiration, not only musically but just how she carries herself and how she's never in the tabloids," Savannah explained. "She's a great role model."

Savannah also cited Justin Timberlake, John Mayer and John Lennon as some of her biggest inspirations. She added that these are artists she would love to collaborate with.

"Justin Timberlake would definitely be one of them," she said. "He is so talented and such a great writer. I would also really like to do something with John Mayer. I really look up to him, musically and would like to pick his brain a bit."

When she was just 16, Savannah's first single, called "Goodbyes," was featured on Radio Disney's Music Mailbox. Soon afterward, the song was added to the Radio Disney playlist and heard by listeners all across the nation and beyond!

Her songs "If You Only Knew," "Fighting For My Life" and "Be Original" were also Radio Disney hits.

"Everyone at Radio Disney was so sweet and supportive to me and my music," she said. "It was the coolest feeling to hear music that I wrote on the radio."

The experience also afforded her the opportunity to meet amazing people who have since helped her on her musical journey.

She told us that the most memorable moment of her career was performing in the Macy's Thanksgiving Day Parade in 2011.

"It was a dream come true for me," she said. "I still can't believe it happened! I had all of my favorite people with me to enjoy the moment with me and it's something I'll never forget."

Today, she shares both original music and covers on her channel. When it comes to covering tracks, Savannah picks anything from a popular song in the charts to an often-requested song, or one that she loves that her fans may not yet know.

"It can be a little scary to make the song your own and put your own personal touch on it, just because you don't want to disappoint the fans of the original," she explained. "I always make sure to sing it how I'd sing it if it were my song."

Sometimes, that means changing up the tempo, turning a fast song into a ballad, or vice-versa.

But Savannah doesn't believe that her experience of achieving success at such a young age is unique to her. Others can do the same by working hard and being persistent.

"This is a really tough industry and can be discouraging at times," she explained. "But you have to keep going and never give up.

Savannah is also incredibly excited for all of the opportunities that the new year will bring, including signing with Vector Management, who represent Ke$ha, The Fray, Kings of Leon and more!

"I just signed with new management, and feel so good about the team I have around me," she said. "New things will be announced soon!"

She also continues to be incredibly thankful for the love and support of her fans.

"You all are amazing and always make my day with your sweet messages and endless support," she said. "It means so much that you've stuck by me through this whole journey. I can't wait for you to see what's in store next."

Curious about Savannah Outen's music? Check out her social channels below!

Savannah Outen has acheived her dreams by pursing her passion for singing. What are you passionate about? Join us at Sweety High to share!