Sayonara Wild Hearts Is a Fast-Paced, Playable Pop Album, and I Can't Wait for More

Game studio Simogo calls their upcoming Sayonara Wild Hearts a "pop album video game," and try as I might, I can't think up a better way to describe it.

I'm immediately drawn to pretty much any game that Annapurna Interactive publishes, and when I heard Sayonara was on their roster for E3, I quickly volunteered to preview the game and find out what it was all about.

Oddly enough, the game's story is a little easier to follow if you're familiar with tarot. Long ago, peace and justice were maintained by three benevolent rulers of the tarot, before Death stole it from them with the help of its cohorts: the Devil, the Moon, the Lovers and the Hermit. Those three symbols of goodness sent their future champion far, far away with the hope that once she'd reached her full strength, she would be able to return and restore the universe to its former glory.

Many, many years later, a girl awakes in her room to the twinkling of a bizarre butterfly. It turns her world upside down—literally—sending her tumbling out her sunroof and into the night sky, where the game truly begins. 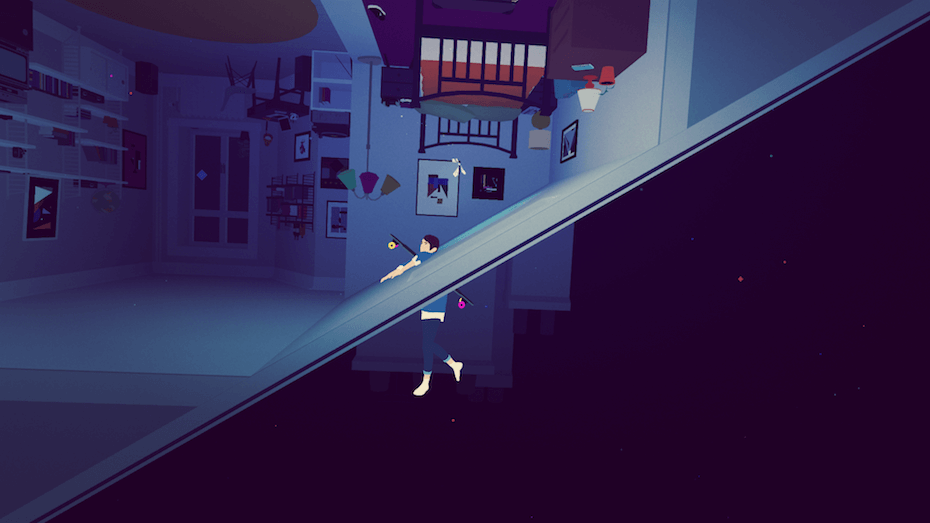 Sayonara Wild Hearts is part auto-runner, part rhythm game, with every movement and gesture timed to a fantastic soundtrack of pop music custom-written for the game. It begins with the hero skateboarding down a giant track in space, nabbing as many heart-shaped collectibles as possible along the way. 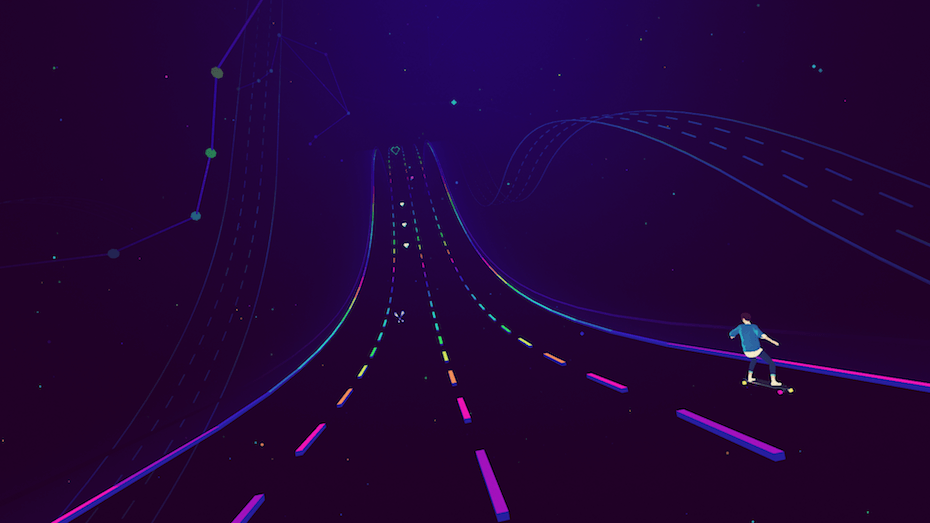 With the game subtly guiding me to follow its trail of breadcrumbs, I often felt that my movements were dictating this music, and not the other way around, however silly that sounds. While I don't think the music in the game would normally appeal to me much, the animation and gameplay satisfyingly brought it to life and made me eager to hear more.

At the end of the first level, I was given a score (silver, out of gold, silver and bronze) and discovered that the hero was unknowingly the tarot's Fool all along. This card usually represents fresh starts, inexperience and optimism for the future, which feels totally appropriate, given her cosmic role. 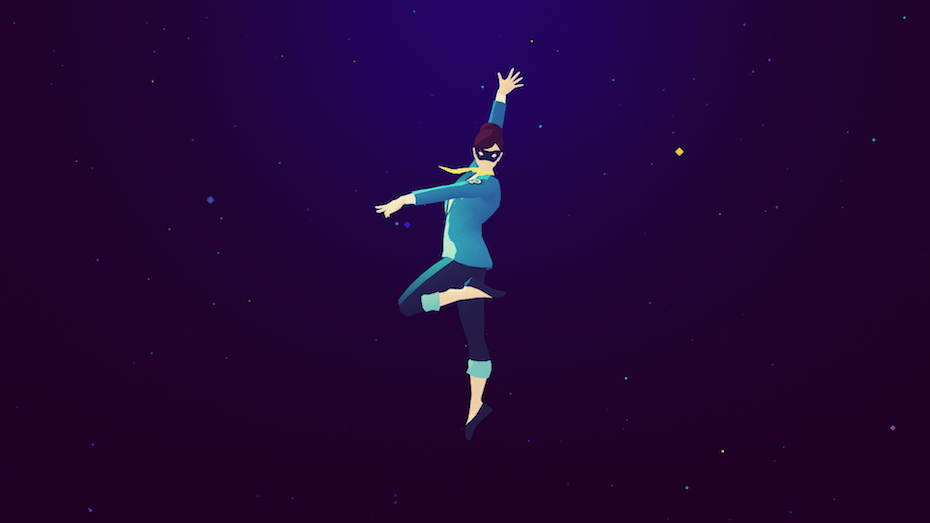 From this point on, both the music and the gameplay were dialed way up. While the automatic running and heart collecting continued, the movement became dizzyingly fast. As the Fool moved through landscapes flush with neon colors, I could barely keep up mentally with what was happening, but somehow the music seemed to keep my timing on track at all times.

Soon, things began moving even faster. The Fool hopped on a motorcycle, and soon I was turning sharp corners at breakneck speeds through fuchsia city streets. Then, I met the modern incarnations of one of my adversaries in the form of a biker gang called the Dancing Devils. Like their tarot card would suggest, they appeared selfish and violent, quickly coming after the Fool with their toughest moves. 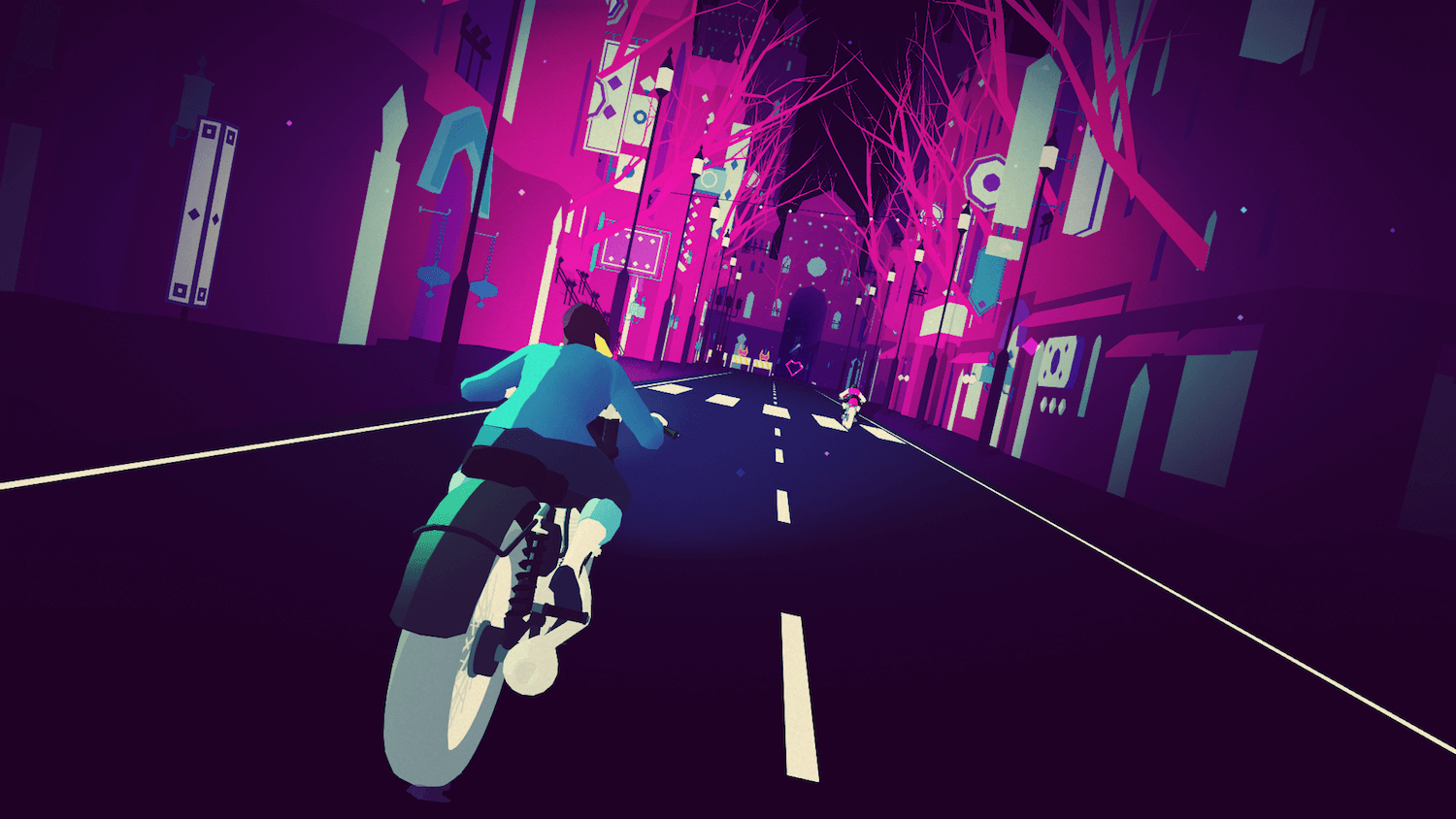 Nearly as soon as I met them, timed button presses were introduced to help me avoid their attacks, as well as to spar a bit in return. Soon, these presses became integrated with the fast-paced runner sections of the game, allowing me to leap over obstacles and strike my enemies at just the right moment. 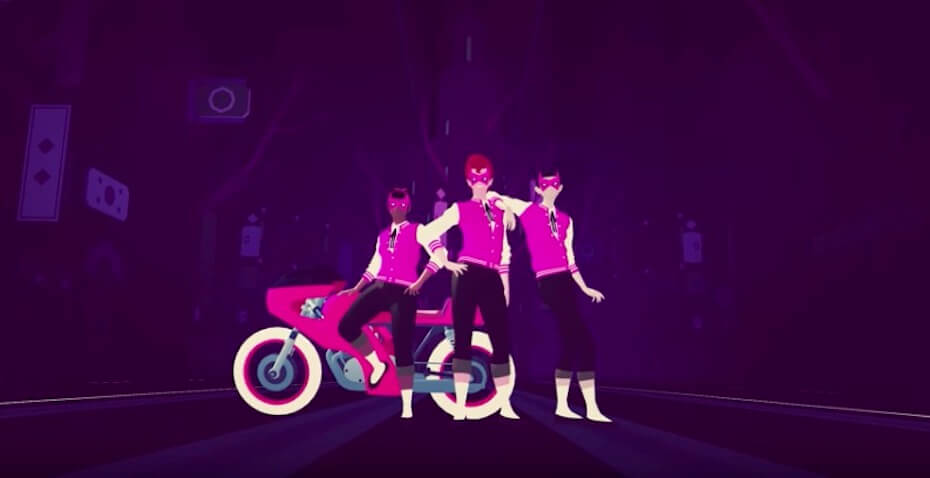 With more to keep track of, there were also more opportunities for mistakes. In later levels of the demo, these errors could temporarily prevent my progression. But when I did mess up, the game would simply rewind a few seconds, bringing the gameplay and soundtrack back so I could try again without missing a beat.

That was welcome, because the final showdown between the Fool and the Devils swaps frequently between different playstyles. Sometimes, I'd be dodging giant fireballs with my motorcycle, and other times I'd be flying through a 3D spacelike Superman. Somehow, the game blends these gameplay styles and transitions between them seamlessly. At the same time, it plays with the genre of its music, borrowing elements from a number of different styles to make one cohesive soundtrack.

The game's website describes Sayonara Wild Hearts as "sensory overloading," which is wholly appropriate. But while I found this to be true initially, after a couple of levels, the chaos actually started to make sense, with every level's striking visuals, strong sound and fast play fully immersing me in the world.

I only got to spend 15 minutes or so with the game, but its short, sweet levels have me hooked. Sayonara Wild Hearts will launch on Nintendo Switch by the end of the year, and I will definitely be playing it once it does.

If Sayonara Wild Hearts looks too fast-paced, click HERE to see if Donut County might be more up to your speed.