No Such Thing as an 'Easy A': How I Almost Failed Ceramics

"That class is so easy. Everyone gets an A."

We've all heard something along those lines before. And wouldn't you know we blindly listen to it?

Well I'm here to tell you today that after my awful adventures in high school ceramics, I realized there is no such thing as an "easy A." Read my story below about how I almost failed this class and what I learned from the situation. 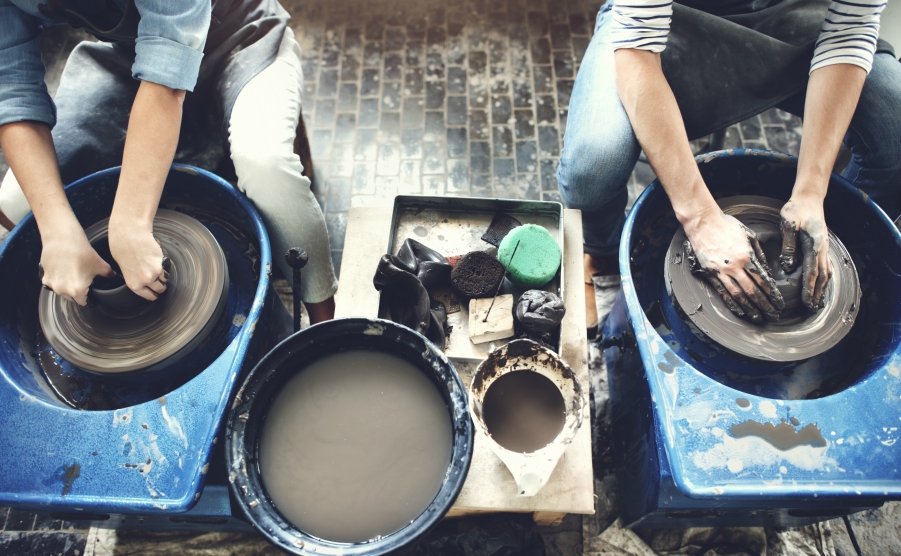 How I Stumbled Upon Ceramics

One of the best parts about high school is gaining the freedom to choose more of your classes.

When it came time to pick an elective, I was stumped. I can appreciate the beauty of art, but I am in no way an artistic person. So having to choose between drawing and painting and 3D design or ceramics seemed like a failure waiting to happen.

But I saw a light at the end of the tunnel when one of my best friends at the time noted that her brother took ceramics when he was in high school and was able to pass it with no problem. My friend's brother wasn't the best student, so hearing how he was so easily able to get an A in a class had me believing I could do the same. Boy, was I wrong.

The first day of ceramics, we simply went over the syllabus and talked about all we'd be doing in the class. We got familiar with where every supply we'd use was located.

Our first project was to create a stamp. Yes, a simple little stamp that we'd use to mark our progress on our projects in our calendars. Easy enough, right? Wrong.

All we had to do was carve a design of our choosing into a chunk of some rubber material and call it a day, but somehow I couldn't even do that. I tried to craft this intricate tree, which I soon realized was idiotic seeing as the cube I was etching into was approximately one inch by one inch.

The day before the stamp was due, I ended up throwing it out and telling my teacher it got lost somehow. I'm not sure why she believed my incredibly unconvincing lie, but she did. She let me make a new one. This time I stuck with a simple flower and all was well.

I ended up getting a B on that assignment, which isn't the worst thing ever, but it was all downhill from that point on.

The following week, we moved on to actually working with clay. The assignment? Create a whimsical whistle that actually works. I'll spare you the details now and let you know that I did not do so hot on this project either. I got a C.

The day came when we finally learned how to throw. Throwing is the term you use when you mess around with clay on a pottery wheel. It's safe to say I wasn't a natural, but then again, who is? I take that back. I remember there being people in my class who picked it up quite quickly. Unfortunately, I wasn't one of them. 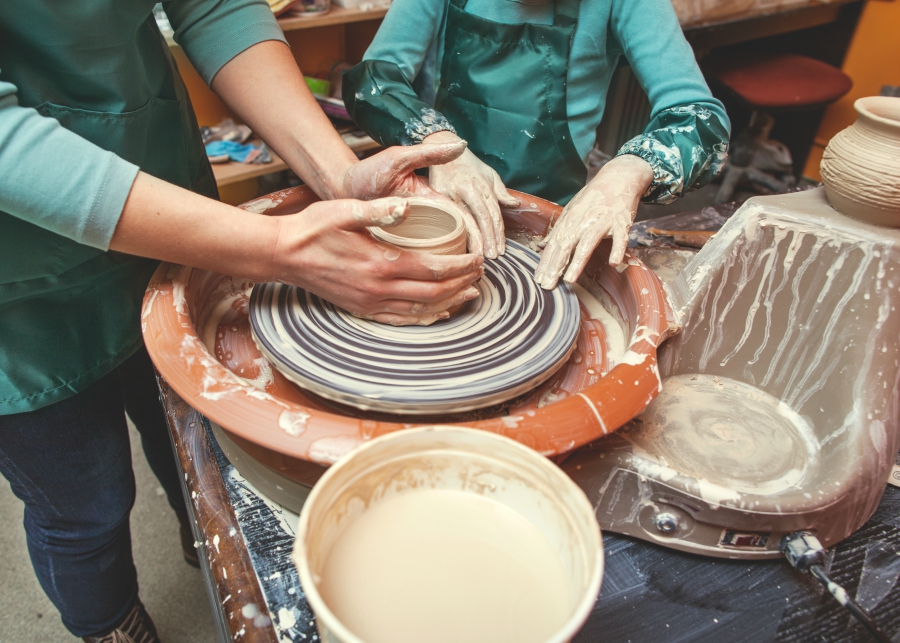 I was pretty much living on struggle street in this class. Assignment after assignment didn't turn out well and I kept getting horrible grades. I got a plenty of Cs, a couple of high Bs and one A. I was bordering on a B/C. Technically this isn't even close to failing, but in my mind it was. The single worst part was knowing just how hard I was trying to do well in the class, but still not being able to reach my full potential of academic excellence.

Then the day finally came for the last project. Dun dun duuun!

I don't entirely remember what the project was, but I remember it involved creating something that could hold something else. It also had to have some sort of symbolic meaning. Vague, I know.

I ended up creating these two little houses stretching their arms toward a clay figurine of myself. I was inspired by my parents' divorce and how I felt as though neither of them would ever have a full grasp on me. My teacher didn't quite understand my profound concept, but once I explained it to her she was a bit more understanding of the mess I presented.

We still had a week left of our class after we turned in our final projects, so I took this opportunity to rack up all the extra credit points I could. I would go in at lunch to clean the throwing wheels. I would stay after school to organize the tools. You name it, I did it.

The final day of the semester had arrived and it was time to discover my fate. Did I pass? Did I fail? So many thoughts were racing through my mind as I sat in my class prior to ceramics.

Suddenly, the bell rang and I bolted towards the ceramics workroom. The grades wouldn't be posted until the period actually started, so I anxiously sat at my wheel with my foot tapping on the ground the entire four minutes during passing period.

After what seemed like an eternity, the class began. We were ordered into a single-file line like prisoners marching to their doom. My time had arrived to receive my fate and I felt as though I was about to pass out. I closed my eyes, took a deep breath, opened my eyes and peered down at the paper in front of me. My final grade was an A-. 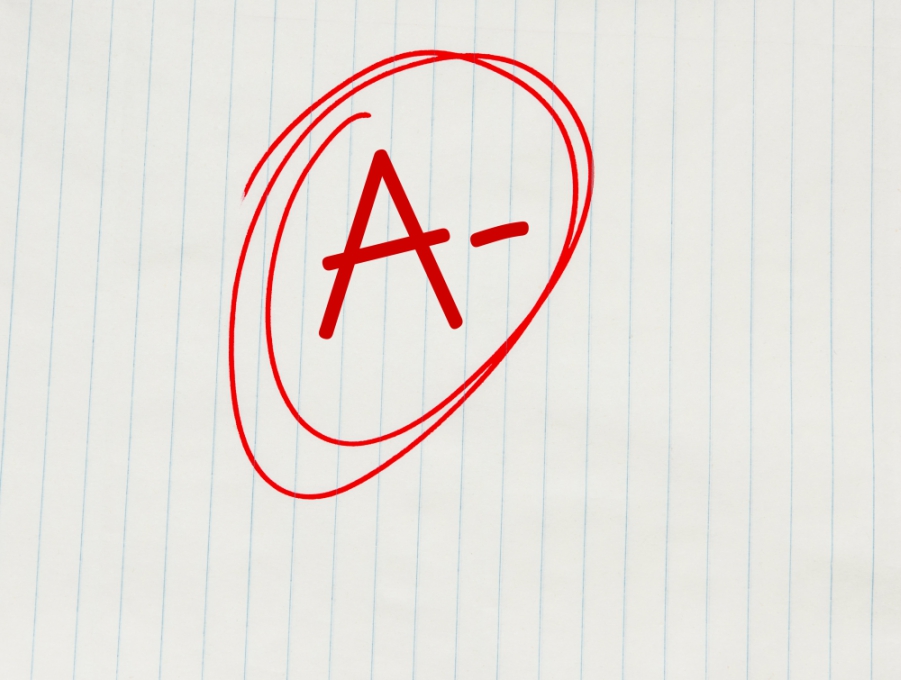 I'm pretty positive I threw up in my mouth a little bit over the shock of realizing that after all that hard work I had earned the grade I so desperately fought to achieve.

Plain and simple, clearly there is no such thing as an "easy A." I definitely learned that the hard way. But I think all the hardship I endured to earn my grade made it all worth it. I don't think I would've felt so accomplished in what I did had I just been handed an A on a silver platter.

After that fateful class, I learned to push my limits in the sense of what I was willing to try. I was always the type of person who wouldn't pursue learning how to do something new if I wasn't amazing at it right away. I may have been forced to stick with ceramics, but I worked my tail off and ended up becoming better at it over the course of the class. Now I'm not afraid to suck at something right off the bat, because I know through a little blood, sweat and tears I can walk away with a greater knowledge on any given subject.

Another thing I want to note, and you're going to hear this for the rest of your school career, always do extra credit work even if you think you won't need it. You will in fact need it. It was my saving grace in this class for sure, but it also helped me in plenty of other classes as well.

Ceramics wasn't the only difficulty I encountered once I entered high school. Discover what I learned after I was rejected from my school's soccer team HERE.