Living your life like the Stranger Things kids just got easier. The bicycle company Schwinn has unveiled a new bike inspired by the Netflix series.

Schwinn launched the limited edition bicycle today, billing it as "Mike's bike." As you'd expect from that name, it's a recreation of the trusty two-wheeled vehicle that gets Mike (Finn Wolfhard)—and sometimes Eleven (Millie Bobby Brown)—around Hawkins, Indiana, on the show. 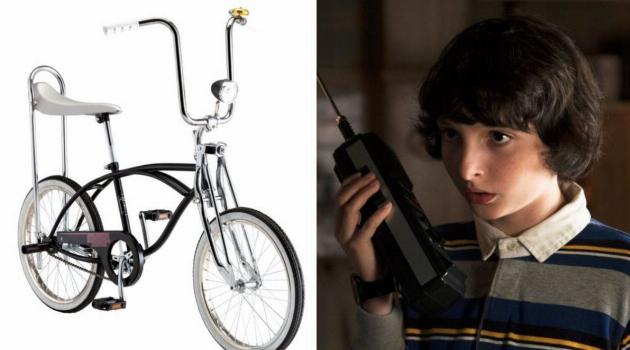 The Schwinn version has all the bells and whistles, including a banana-style saddle, springer front suspension fork, classic high rise ape bars, rear pegs, and front light, among other features. Even if that doesn't mean much to you, you'll probably at least appreciate that it looks "rad" and retro, too. The company showed off the bike via Twitter with a very in-theme background.

Mike's bike from Stranger Things could be yours for only $379.99. Don't be a mouth breather; subscribe for our email newsletter to be the first to know how to have the raddest bike in Hawkins! https://t.co/uYwMwSjnzM pic.twitter.com/aYc2y0JHHS

Keeping in line with the throwback theme, Schwinn is having customers purchase the bike by phone. Yes, if you want this limited edition bike, you have to pick up the phone and call the company to put in your order. It's priced at $379.99, and there are only 500 being sold. Schwinn recently tweeted that the "phone lines are now open."

PHONE LINES ARE NOW OPEN!
Turn your bike collection upside down with one of the @Stranger_Things limited edition Schwinn bikes. Call 1-800-SCHWINN today to place your order.