There may not be a more iconic candy shop than See's Candies.

All my life, I've associated the brand with tasty chocolates, the holiday season and cheery special occasions. So when I learned that their factory in Los Angeles was fewer than 10 miles from the Sweety High office, I had to reach out and see if it was possible to see the inner workings of the factory.

Though the factory isn't open to the public, the folks at See's were gracious enough to invite a couple of us from Sweety High to check it out and watch some incredible treats get made. We stopped by earlier this week, when I met the extremely kind See's Candies staff and donned a long white lab coat and blue hairnet before they showed me around the factory floor, where they make their most iconic treats.

Here are some of the highlights.

The second I walked into the enrobing room, I was hit with the powerful aroma of chocolate and nuts. The incredibly sweet scent didn't leave me over the entire course of the tour.

The factory was in the process of making their Dark Nougat candies, which consist of chewy nougat packed with almonds and coated in dark chocolate. Multiple conveyor belts, each greater than the length of a football field, stretched from one end of the room to the other, with the Dark Nougat process taking up the belt closet to the entrance. 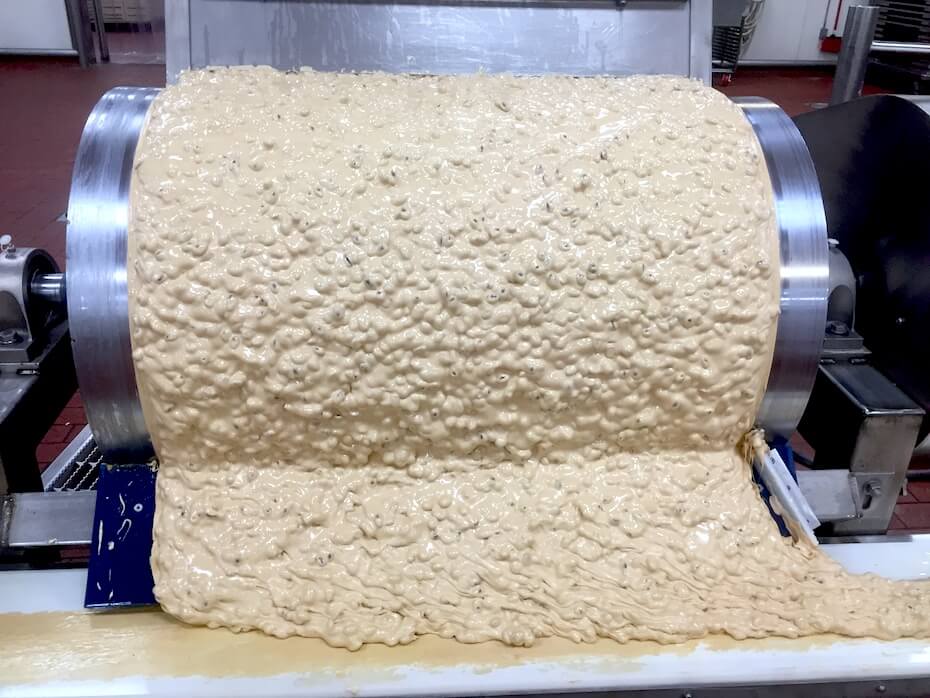 At one end, the process began with the pouring of a hot vat of gooey nougat and almonds over a cooling cylinder. From there, it was slowly pressed and flattened into thick sheets before it was stamped into just the right thickness and mechanically sliced into strips. All along the belt, workers ensured that everything was going to plan and pulled away the outermost nougat strips. While this outer layer isn't the right thickness to be made into Dark Nougat chocolates, it's still good candy, and is collected and repurposed elsewhere. 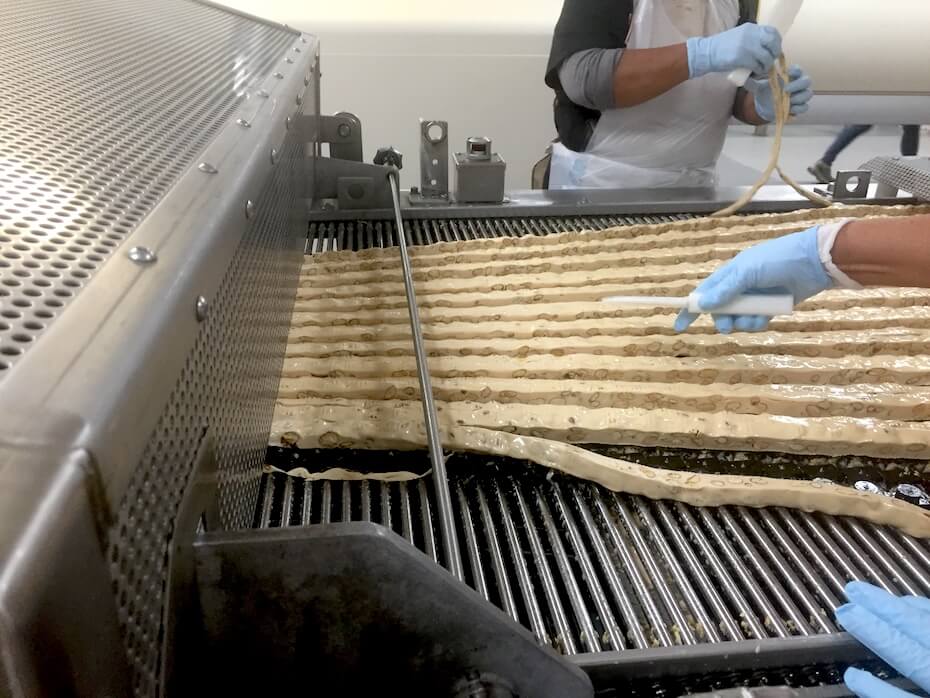 Next, the nougat was cut into cute little rectangles before the real show started and they were enrobed, row-by-row, in melted dark chocolate. The process was absolutely mesmerizing. 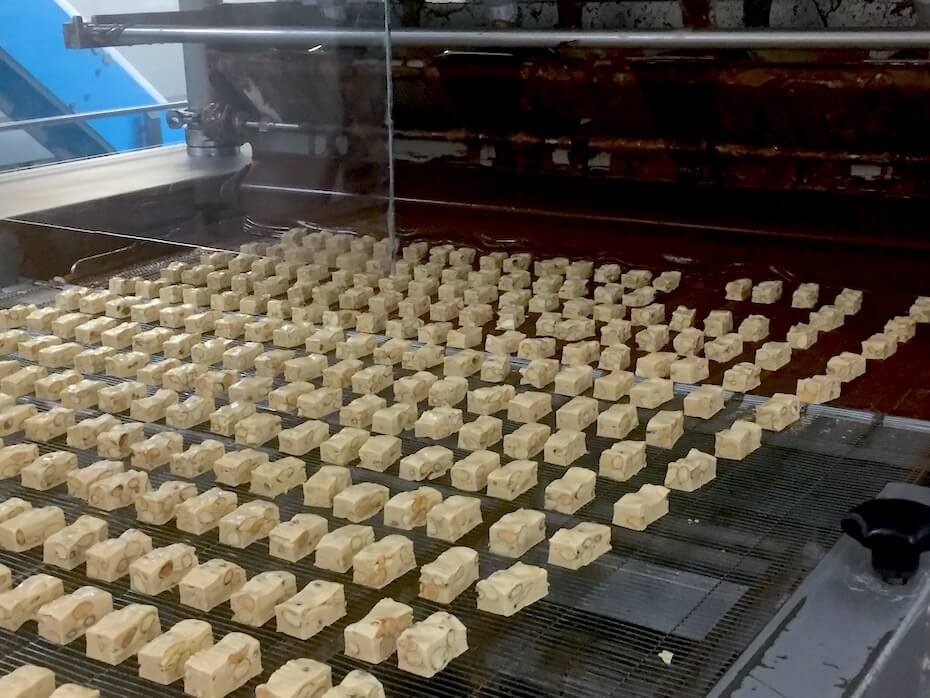 On the other end of the dripping chocolate, the coated nougat bites went over a vibrating grille to knock off any excess chocolate. After a bit of cooling, the nougat went through yet another enrobing process for another beautiful coating of dark chocolate. The chocolate also slid under a moving device that left each piece with its signature swirls. 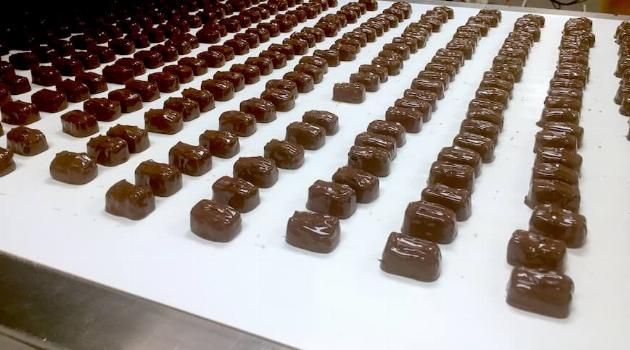 Lastly, each cooled nougat piece went through a metal detector before being funneled further down the conveyer belt and being carefully boxed up by hand. From beginning to end, it takes about half an hour from a piece to make it from one end of the room to another. I had never imagined that so many steps and so much personal care went into making a delectable piece of chocolate, and I imagine that knowledge will make each piece of See's candy even more delicious to me. 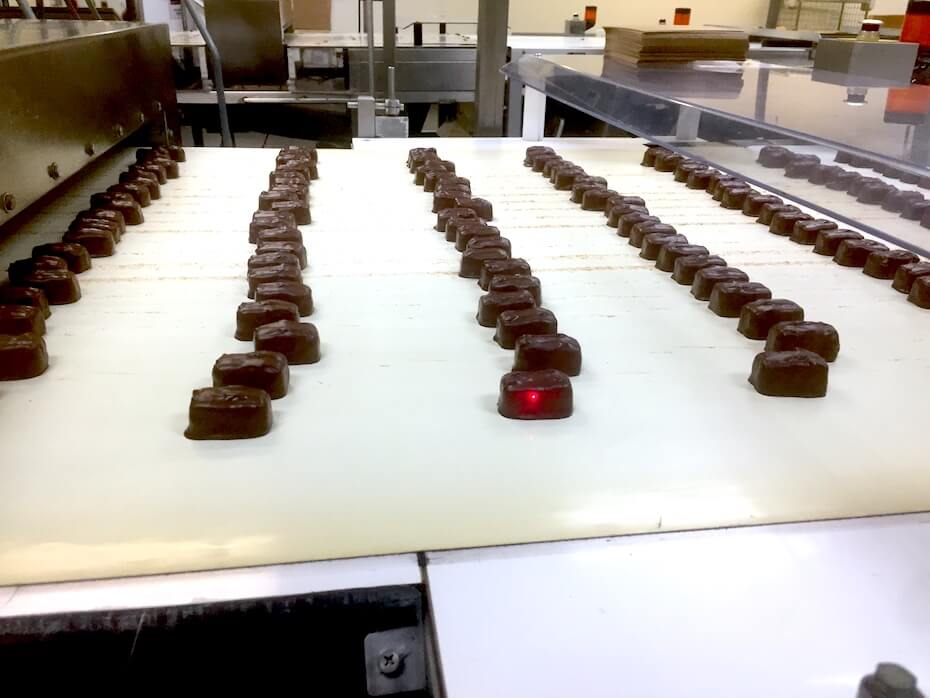 On the way to the bon bon room, I passed through a massive warehouse full of racks and pallets stocked with raw ingredients, like granulated sugar, as well as freshly packed sweets from various areas of the factory. Though the chocolate smell was less pervasive here, it was still very present.

As I made my way into the bon bon room, the air was fragrant with the smell of sugar and buttery caramel. While the majority of See's confections are made on a production line with a little human help, everything in the bon bon room is carefully made by hand. 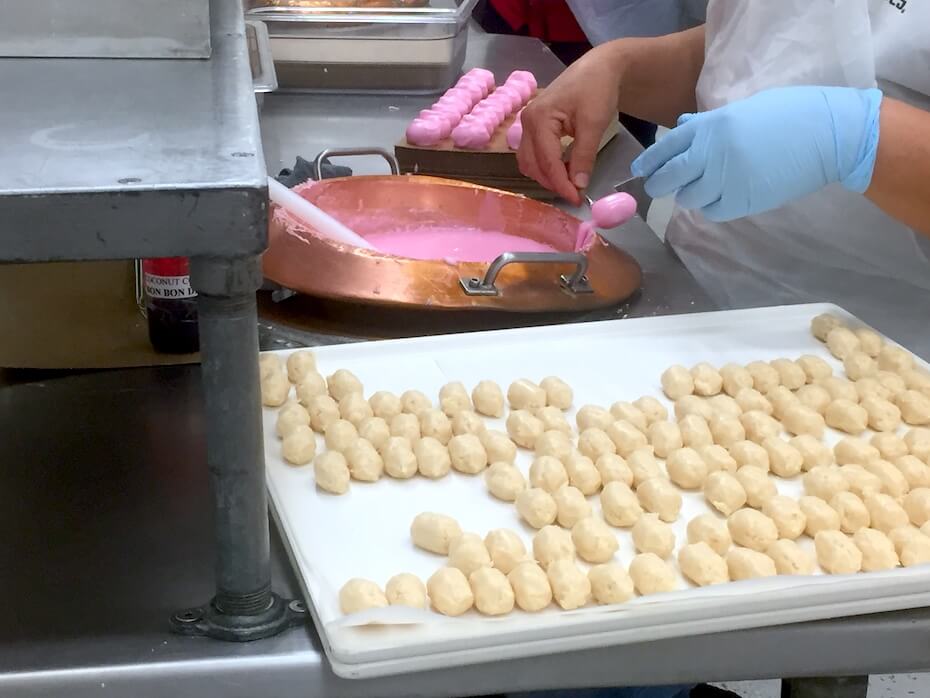 One worker used a special hook to expertly dip small coconut bon bons into a vibrant pink icing before topping them each with a delicate "S" shape with a simple flick of her wrist. Another worker coated fresh, fluffy marshmallows into luxurious caramel to make See's signature Scotch Kisses. This was the only candy I tasted while on the factory floor, and it was absolutely delicious—probably even more so because it had been dipped just moments before. 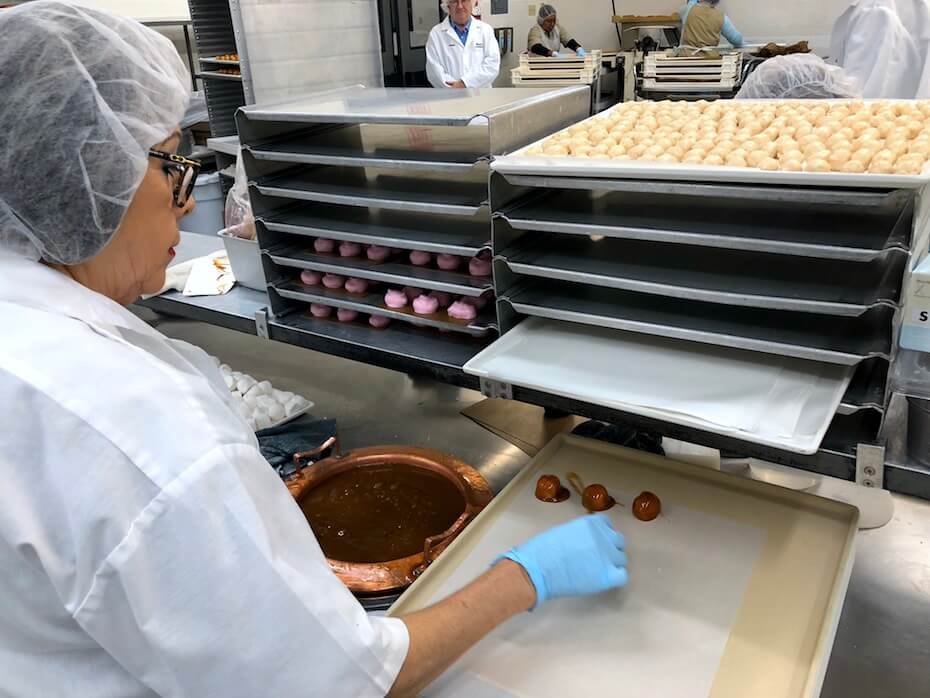 As I made my way into the last major room of the tour, any chocolate I was sensing was replaced by the powerful scent of melting butter and caramel. The machines in this room were used to make See's Peanut Brittle, California Brittle, Victoria Toffee and Toffee-ettes, which each involve their own multi-step processes.

When I was there, cooled slabs of butter were stacked on a table near a machine that was turning and melting huge heaps of it to be added to the caramel about to go into the brittle.

When they're ready, ingredients including butter, sugar and corn syrup (plus peanuts) go into a machine called "The Porcupine." It gets its name because of internal spikes which eject steam to cook everything to make the perfect brittles.

Eventually, the cooked brittle is flattened out and conveyed down a machine where a special robot cuts squares of the thin sheets of brittle before scooping them up, flipping them 90 degrees, and laying them back down. This gives the brittle a chance to cool evenly before it's stretched by yet another machine to become even thinner.

Even hours after the tour concluded and I was back in the office, the sweet smell of See's candies hadn't left my nostrils.

If you can't get enough of chocolate, click HERE to find out what I thought of Cookie Good's new edible brownie batter bowl.