Sensate Is a High-Tech Tool for Reducing Stress and Anxiety—But Does It Really Work?

As much as I love how great I feel after a meditation session, I often struggle with the process as a whole.

I find it difficult to set aside dedicated time for the practice, and once I'm there, my overthinker of a mind cuts that time way down as it wanders before I remember I'm meditating and have to pull myself back in. This is all part of the process, I understand, but when I don't practice it regularly, it can feel like more effort than it's worth.

So when I heard about Sensate, the product immediately caught my attention. This high-tech tool is designed for reducing stress and anxiety without the effort, promising deep relaxation in as little as 10 minutes. It sounded too good to be true, but the brand gave me a sample to try for myself, and Sensate lives up to my loftiest expectations.

Sensate is designed to calm the body's natural fight-flight-freeze response, making you more resilient to stress over time while relaxing you at the moment. It does this by pairing a vibrating device (which you wear over your sternum) with soothing music, calming the mind while toning the vagus nerve. This nerve lives in the neck and supplies the nerves to the heart, stimulating a reduction in heart rate.

Sensate's app has a number of experiences available as free downloads, each specifically engineered to produce calm both through hearing the sounds and through the sensation produced by Sensate. Their audio selections include four "trade-secret elements" to produce full immersion and a resonant sound experience that results in calm. That means that even if you have no idea how to meditate, you can reap its benefits, and you'll start feeling them from the very first session. It also has accumulated effects that accrue with regular practice, with the goal being improved sleep time and quality, improved mood, reduced anxiety and increased resilience to stress. The device sells for $249, with the app available for free in the App Store and Google Play.

I was very eager to get started with Sensate from the moment it first arrived, but before I could try it, I went through everything that came in the package. The box included the stone-shaped Sensate itself, a travel pouch, an adjustable lanyard, a USB charging cable, a sleep mask and a user guide to orient me and teach me exactly how to use Sensate. I read the guide to learn what I was in for as I charged the Sensate, and downloaded the app so that there'd be no delays that night when I tried it for the first time. 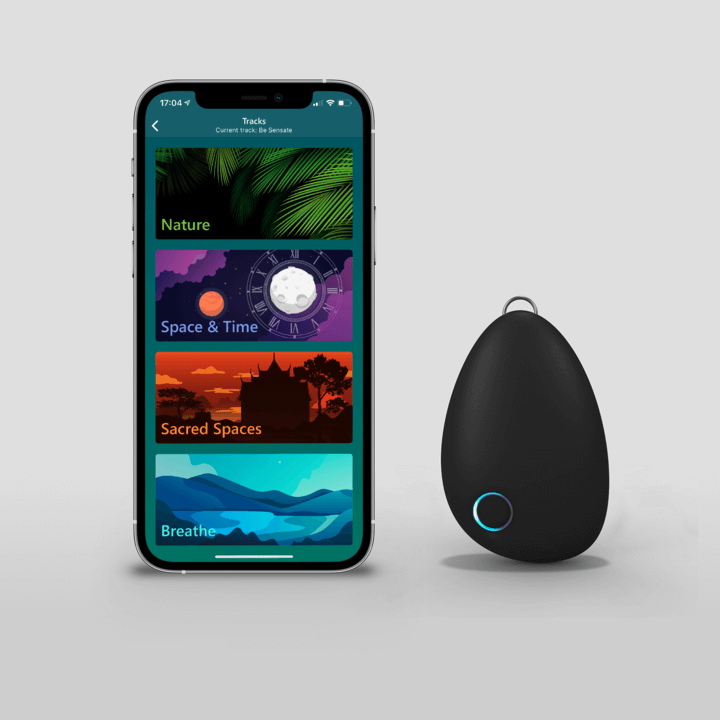 When the time came, syncing my Sensate to the app was as easy as pushing a button at the top of the device. A ring around the button was blue, meaning it was on. From there, it was time to start downloading some experiences. The app had a number of options under Nature, Space & Time, Sacred Spaces and Breathe themes, each ranging from 10 to 30 minutes. After previewing them, I downloaded them all, enjoying both the more ambient sounds and the ones that sounded like lullabies, and then it was nearly time to get started.

First, I set aside some uninterrupted time right before bed so I could get the full experience. I got situated in my dark bedroom and put on my headphones before using the lanyard to ensure that the Sensate was right over my breastbone for the full effect. It can be worn over light clothing or directly on the skin, and I prefer it right on my skin for the fullest effect. Then I laid down flat, started the 10-minute "Avian" track for my first session and closed my eyes. It was time to see what all of the fuss was about. 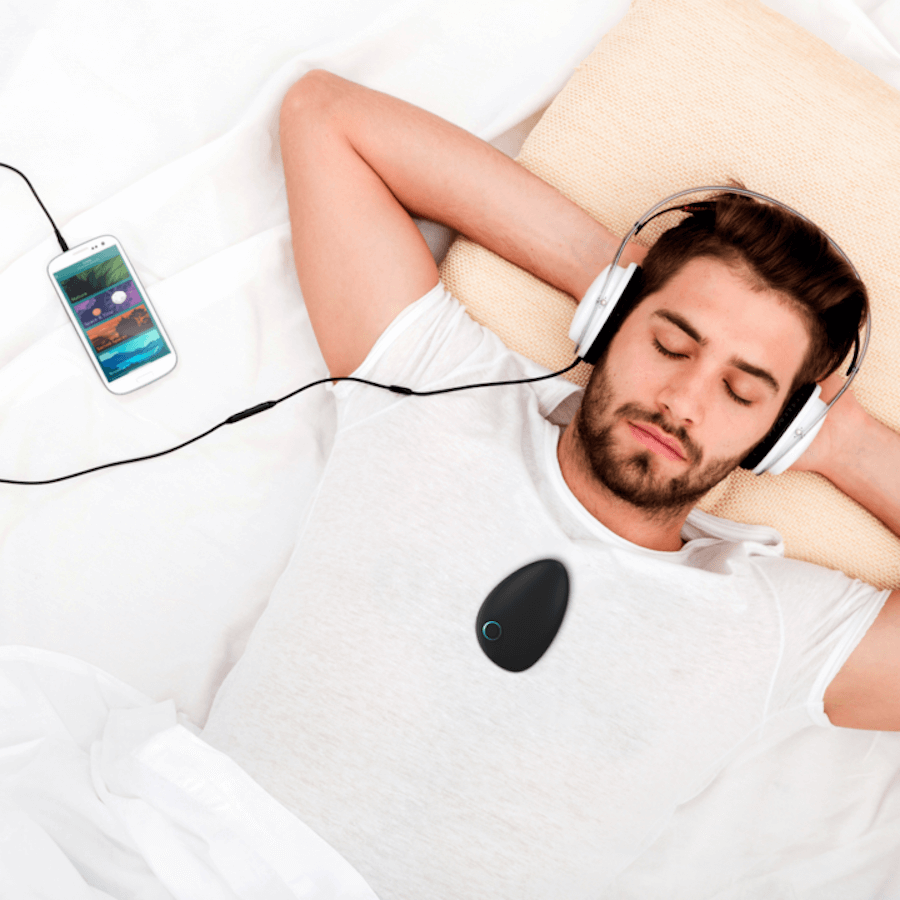 Immediately, I was met by the sound of chirping rainforest birds over ambient noise. Occasionally, the Sensate would pulse and vibrate, seemingly in tune to different aspects of the soundscape. The overall effect was ridiculously soothing, and so much more than I'd expected before starting the experience.

Even better, I found it incredibly easy to clear my mind during those minutes. It's not that I'm always stressed—it's just that my mind is always in overdrive. Even when I'm not thinking about what needs to happen the next time I log on for work, for example, I'm often running off on wild tangents in my head about my favorite TV shows, or daydreaming extensive detailed scenarios that will probably never happen. But with these relaxing sounds in my ears and the reverberation in my chest, I could hone in on the experience itself. The vibrations aren't even like a massage—they're just gently restful in a way that's tough to describe.

However, I did discover that I actually prefer to use Sensate without the lanyard, because sometimes it vibrated the plastic and metal on the lanyard itself, which I found distracting. However, if you move around a lot and need the lanyard to keep the Sensate in place while you rest, it's great that that's an option.

When it was done, I liked the experience so much that I loaded up the other Nature track, titled "Forest," and had another 20-minute session, which left me feeling even more relaxed. When I was done, I just had to hold the button on the Sensate until it turned off, and then I slept like a baby.

Over time, I've used Sensate almost every other day, and I'm still enjoying every minute. While I like all of the music/sound types, my favorites are definitely the half-hour sessions, because they really let me sit and unwind. You can also adjust the volume, as well as the vibration intensity, to customize the experience to your liking. Thanks to this, not only have I felt immediate effects each time I used it, but those effects seem to be more profound and longer-lasting each time. 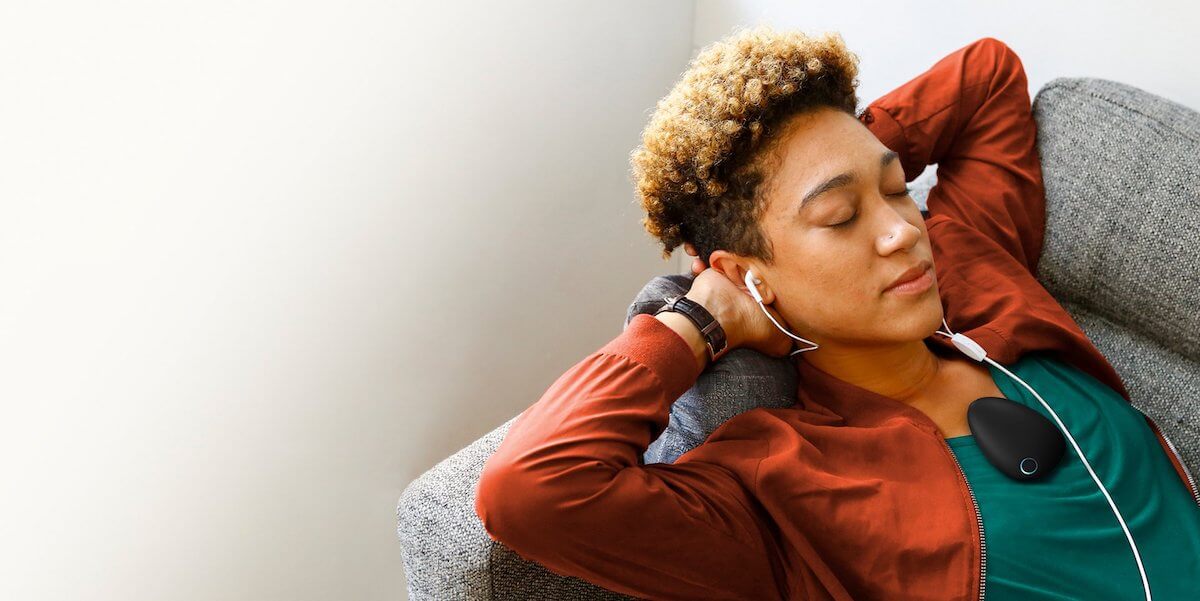 I used the Sensate for about four hours before it needed to be recharged. Since sessions don't last anywhere near that long, that gives you plenty of time in between uses to charge it up (which takes about two hours). I also knew exactly when the battery was running low, because the ring around the button on the top of the Sensate turned green when it was.

And I believe my overall stress has been reduced, too. On nights I use Sensate, I definitely fall asleep faster and feel better-rested in the mornings, and I feel like there have been at least a couple of occasions I've been through what normally would have entirely stressed me out, but instead of going into panic mode, I breathed, and thought about it, and realized that I'd be able to tackle it before that happened. Maybe it's all in my head, but this thing works, and I feel lucky to consider it part of my stress-busting arsenal.

I am in love with my Sensate. Because meditation can be a challenge for me, this device is perfect because it's so much easier to create that time to unwind, and the relaxation is automatic, not requiring me to be in a specific mindset to get the most benefits out of it. At $249 for Sensate, it's not exactly a must-buy for those on a budget, and perhaps it won't work as well for everyone as it's worked for me, but I recommend it, regardless. My only regret is that it's not waterproof, because I think this device (and the soothing sounds from its app) would be perfect to enhance any bath.

Want to learn more about relaxation? Click HERE for some of our favorite relaxation techniques you can add to your evening routine.