Sierra McClain: What Girl Power Means To Me

I feel as though every girl, whether they realize it or not, displays an example of "girl power" every time she empowers herself by making a decision that benefits her well-being, or encourages a friend with her words and/or actions, or simply stays true to who she is! 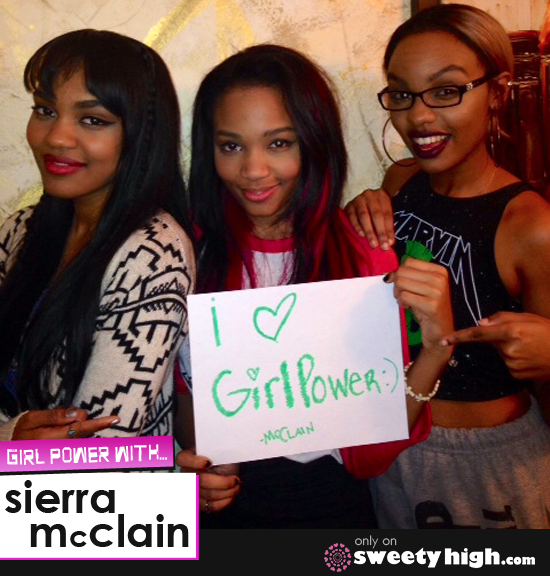 I think most females don't realize that by having confidence in themselves, they're subconsciously allowing others around them to follow in their example. In the words of Marianne Williamson, "… As we let our own light shine, we unconsciously give others permission to do the same.. "

To me, "girl power" is confidence. It's empowering and believing in yourself, and encouraging other females to do the same. It's being proud of the decisions you make and relaying the message to the world "I RESPECT ME". It's knowing that you aren't perfect (no earthly human is!) but that you ARE worthy.

It's understanding that you are beautiful, and strong (stronger than you think). It's recognizing that you have a voice, and using it with a sense of responsibility. It's being secure in the social/emotional/spiritual choices that you make. It's realizing that life isn't gonna be Starbucks and cake pops all the time (wait… Yeah, no it isn't) but having an outlook and an attitude fit to take on the world. It's love. Loving others, knowing you ARE loved, and loving YOURSELF. And I would say it's knowing that you're flippin' awesome, but you already know that. 😉

Sierra McClain is the eldest sister in the group McClain, made up of Sierra and her younger sisters China and Lauryn! She has also acted the films The Gospel and Daddy's Little Girls, as well as guest starred on A.N.T. Farm. She says that whether she knows it or not, every girl is an example of girl power!