SkateBIRD Is More Than a Tony Hawk Clone, and That's Where It Really Soars

Ever since I first laid my eyes on SkateBIRD in December of 2019 during a Nintendo Indie World showcase, I've been enamored with the concept.

It's simple—you're a bird on a skateboard. What more could a player want? The trailer promised Tony Hawk's Pro Skater-styled fun, but with far more charm and cuteness in the mix, and I don't know quite how I managed the nearly two-year wait.

The game is officially out tomorrow, Sep. 16, but we were lucky enough to get a review key on the Nintendo Switch ahead of its release, and after completing it, it's become one of my favorite titles of the year.

I grew up playing the Tony Hawk's Pro Skater games, and even though I was never great at them, there was always something captivating about the skateboarding gameplay, the epic soundtracks and the quest to chain together as many awesome tricks as possible without falling on your butt. That's why I was so excited for last year's release of Tony Hawk's Pro Skater 1 + 2, a remaster of the classic games first released in 1999 and 2000.

But when I did get that game, I booted it up, played for a couple of hours and then felt completely unmotivated to continue. Maybe it was because I struggled to find my groove with the gameplay, or I was still tired of those same old tracks that I'd heard a billion times 20 years ago, but it just didn't click for me the way it used to, and I quickly abandoned it.

As I got my hands on SkateBIRD, I had to hope that the same thing wouldn't happen. I can't say it was love at first sight, but today, I'd pick playing SkateBIRD over a Tony Hawk game in a heartbeat. 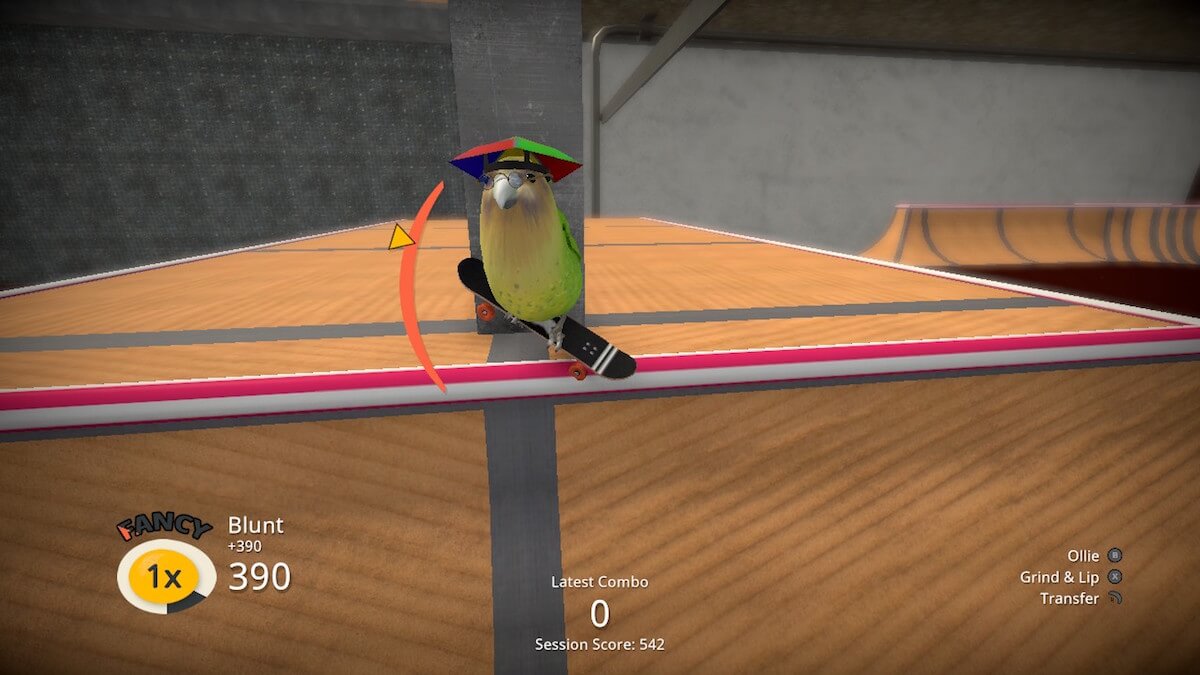 As I started up my game of SkateBIRD, I was immediately charmed by the presentation of the game. The art was adorable, and my journey started with customizing my character on the Create-a-Bird screen. It's clear that the team behind the game did not skimp in this area, because in addition to being able to pick accessories to wear on your bird's head, face, neck, back and waist, there were a stunning 38 bird species to choose from, ranging from parrots and parakeets to owls, pigeons, finches, kingfishers and so much more.

Immediately, I gravitated toward the kakapo (a personal favorite bird, native to New Zealand, which due to having no natural predators evolved into a flightless, massive parrot), though later in the game, I did swap over to the Stellar's jay, a gorgeous bluejay with a black crest that I see pretty much daily since I moved to the Pacific Northwest. Here, you also have the choice to customize your skateboard wheel color and design, though oddly, there's no way to actually see the skateboard pattern you're swapping from the angle presented on this screen, and I've yet to find a place in the game where it's easy to see the board designs. 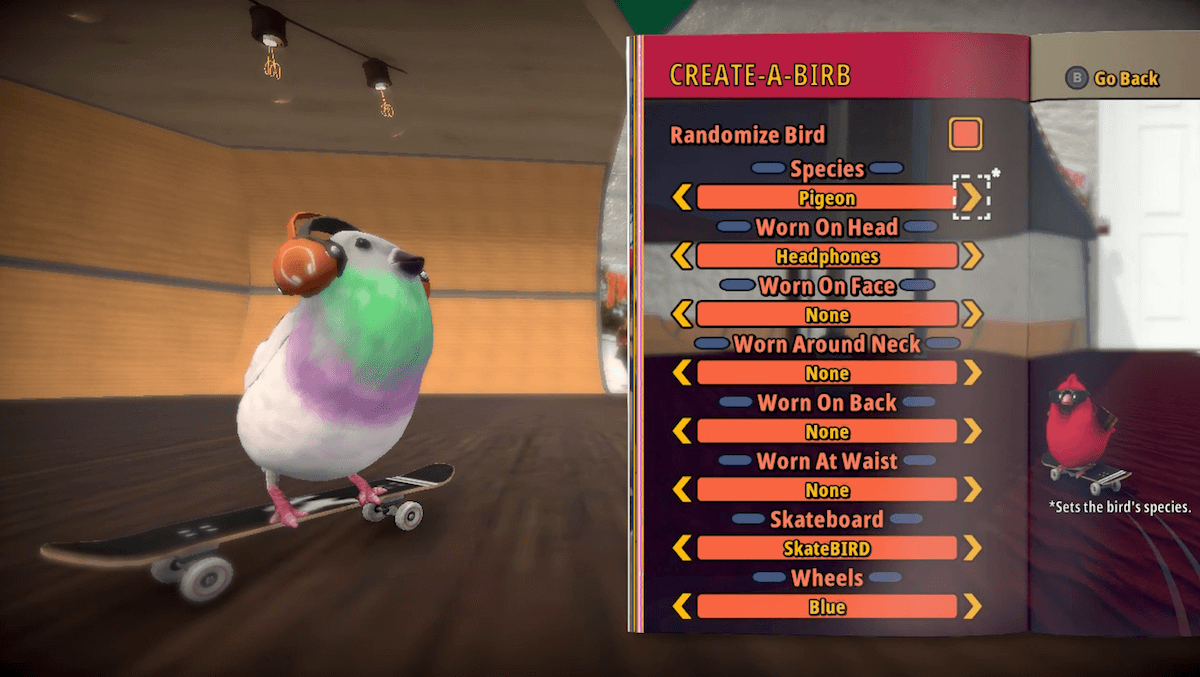 I was ready and excited, though as the first level loaded up, I started to feel that dread creep in. As I skated around and did what I could to grasp the controls, something about it just felt off. Was it muscle memory from the Tony Hawk games making it hard to understand these controls? The gist was the same—B to ollie, A to grab, Y to kickflip and X to grind—and yet I couldn't quite get the hang of it.

And then there was the fact that it took me a while to figure out what exactly I could do. I found some secret collectibles—additional music tracks in the form of cassettes, and more accessories for my bird to wear—but it took me an embarrassingly long time to locate one of the birds in the game who gives out missions, allowing players to progress.

When I finally did meet one of these birds, I was tasked with grinding four soup bowls under a giant bed. I'm not sure why, but I could not do this for the life of me. I probably tried a dozen times before getting frustrated (as well as experiencing some pretty major motion sickness), so I put the game away, promising to try again the next day. 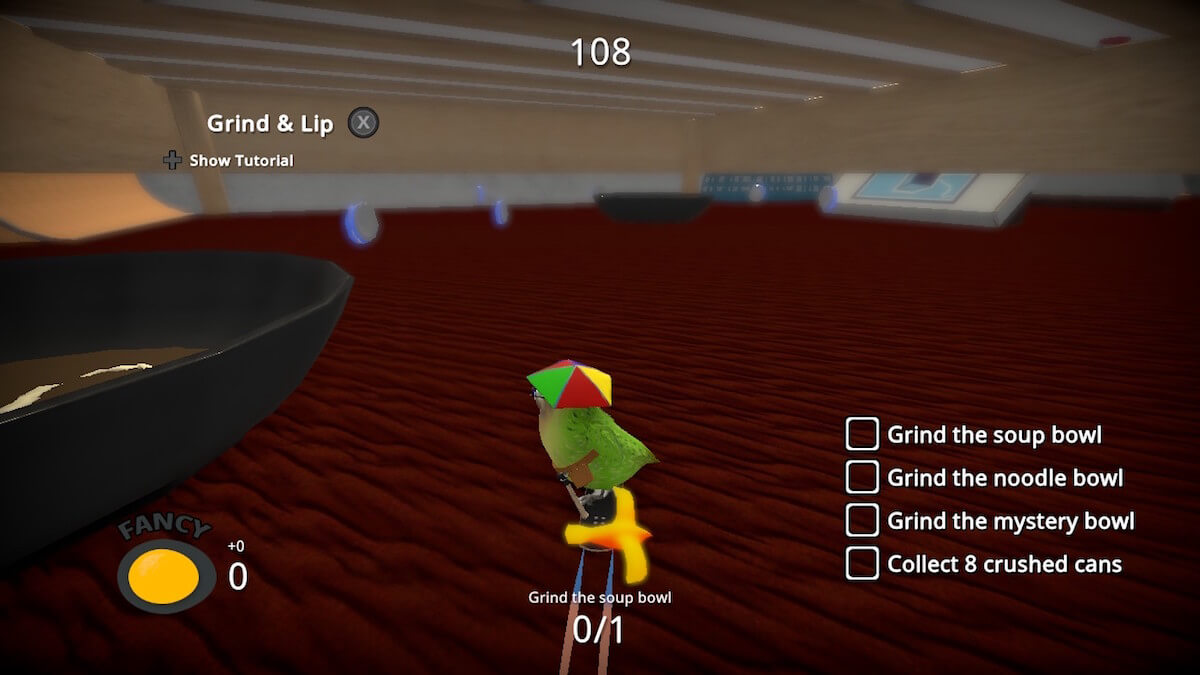 When I did, better-rested and in a better mood, I got it on my second try. Funny how that works. And as I continued to play the game, finding more cute birds, sending me off on little missions of their own, it all started making more sense to me. But I don't think it was until one mission where I was informed of the double ollie (you're playing as a bird who can fly, after all!) that something clicked for me. This wasn't Tony Hawk with birds. It was something else entirely, and the second I embraced that, the controls started making sense—and that's when I fell fully in love with the game.

Being a skateboarding bird is all about skating with purpose, and the missions in SkateBIRD are bite-sized and feel very intentional. The fact that it's all tied together with a narrative-driven story also makes it more like a Tony Hawk's Underground game than the original games in the series, which is very welcome. Throughout, you're on a quest to help an unseen human character known only as "Big Friend" get their life together, and you and your best bird friends are willing to do whatever it takes to help—as long as it involves sick skateboarding moves. The dialogue is creative and fun, and wanting to see what happened next always propelled me forward. 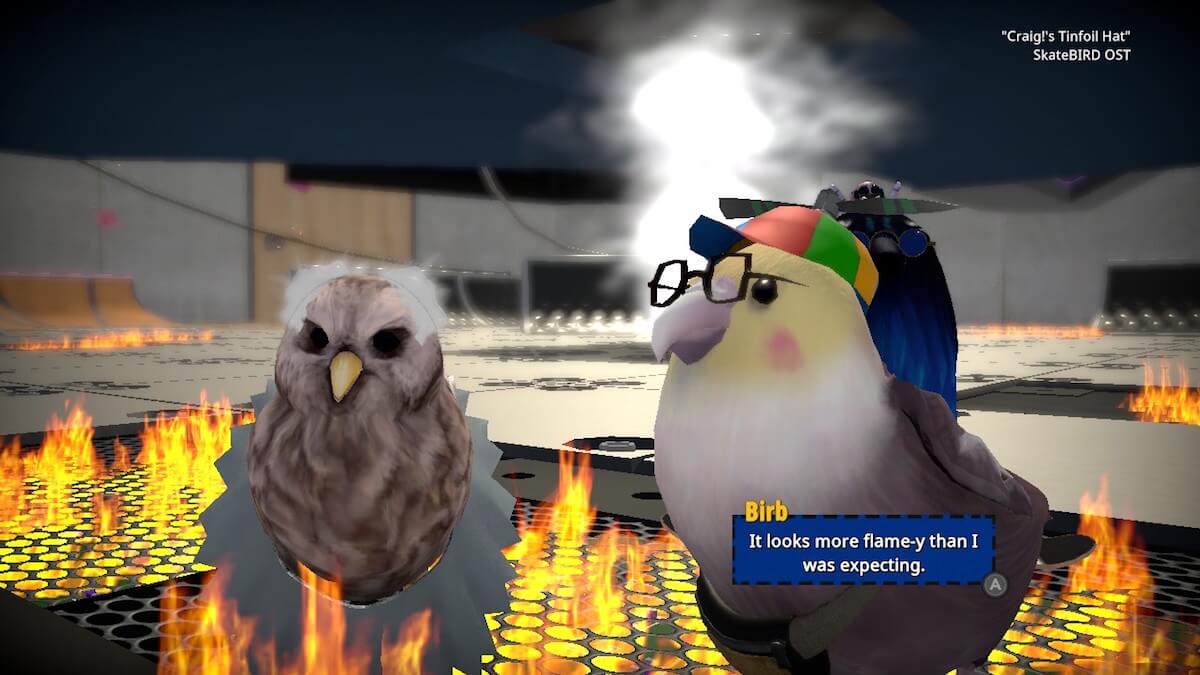 Those mini-missions also meant that, with only a couple of exceptions, the game didn't make me feel like tearing my hair out and quitting every five minutes as some other skating games do. The birds are often colorful and loud, so it's not too hard to find them once you're really looking. It also helps that the presentation is ingenious. 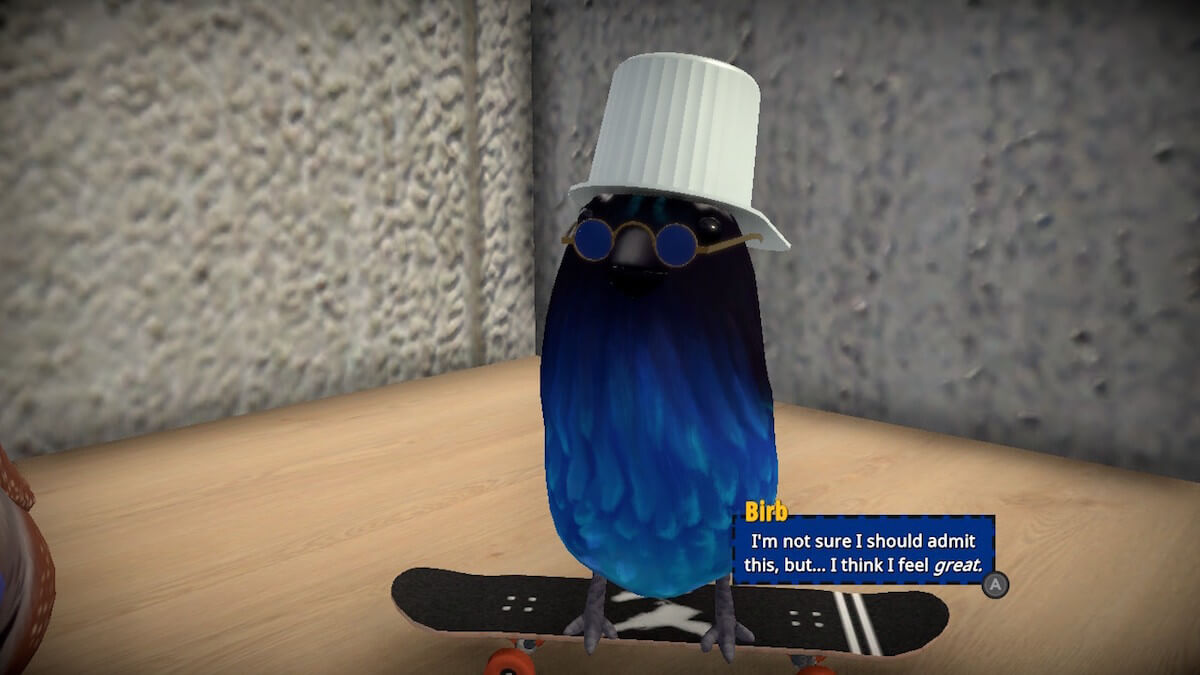 Since you're a tiny skating bird, your world is quite different than if you were a skating human. The result is innovative skateparks that transform everyday spaces into whimsical yet massive arenas, where you'll be ramping up magazines, climbing bookshelves and doing manuals over beds to accomplish the tasks at hand. It's always a delight entering a new area to see what you'll find there, and discovering and then mastering all of its hidden spaces. 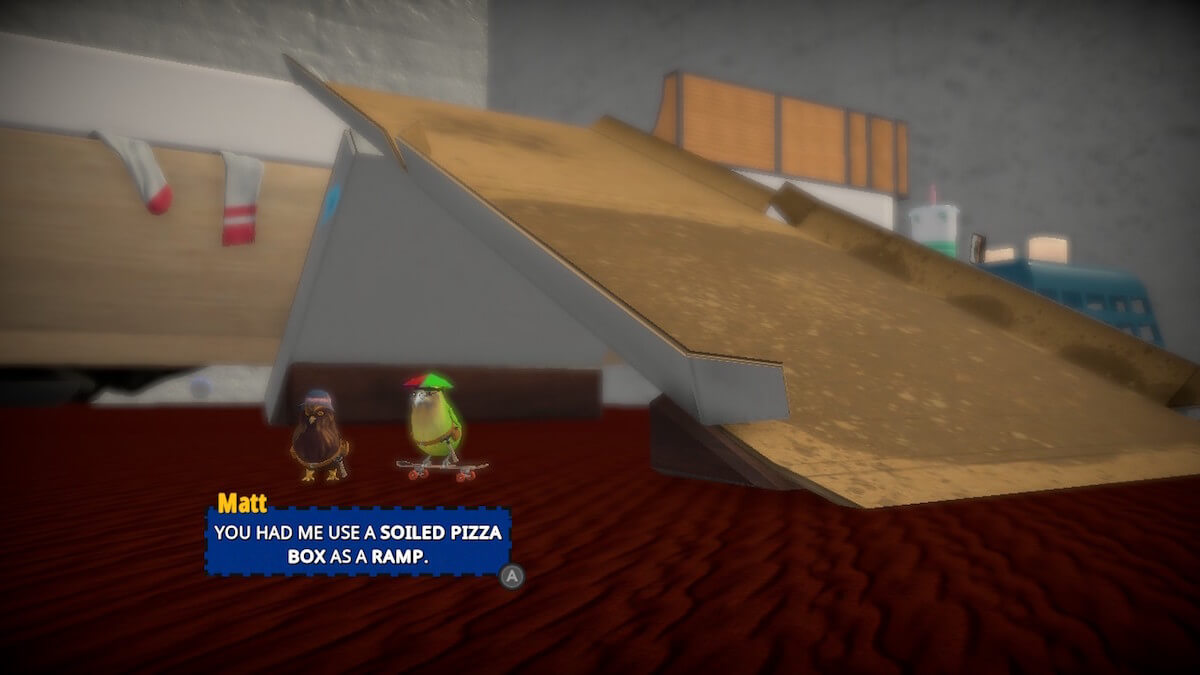 And then there's the music. In addition to the lo-fi original soundtrack, the game includes licensed music that can be unlocked by collecting hard-to-reach cassette tapes throughout the levels. That music from bands Grave Danger, Illicit Nature, HolyWOW and We Are the Union is mostly ska and pop-punk, which feels right at home with the gameplay. Though none of the tracks quite reach the heights of Goldfinger's "Superman," made famous in the original Tony Hawk Pro Skater, the music is still great and just fits—and if, at any point, you get sick of a song, you can simply turn it off. I love that the chance to discover more great music incentivized me to seek out the cassettes in each level, whereas I couldn't have cared less about finding secret tapes that don't do anything in the Tony Hawk games.

Another thing I loved about SkateBIRD was that it really made me feel like I was improving as the game went on. The first level taught me all of the basics, including how to increase the "FANCY" special meter to pick up speed to reach new heights, and the fact that I could roll around on the floor once I'd bailed to collect items, but subsequent levels really made me master the movement. There's just something so satisfying about finally successfully grinding a string of telephone wires in the right order, or collecting a series of hard-to-reach snacks after several tricky attempts. Plus, the L button makes you let out a little bird cry, or "screm" as the game calls it, and doing this never stopped being a high point for me. 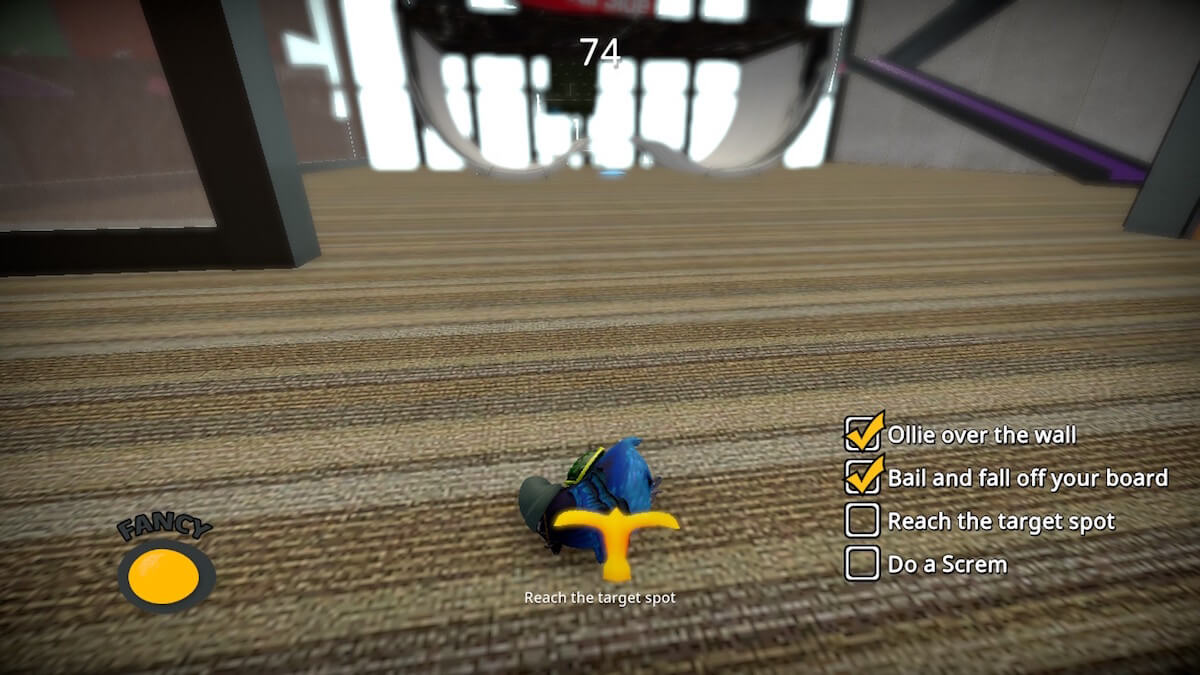 You can set your own reset points, and return to the desired spot with the simple press of a button which is a life-saver (and a time-saver) when you're trying to reach a tricky tape or you're in a high area that's tough to get back to without a ton of backtracking in the case that you fall down. This, combined with the unique movement, all backed up by that flying double-ollie, makes the game a true pleasure to play. 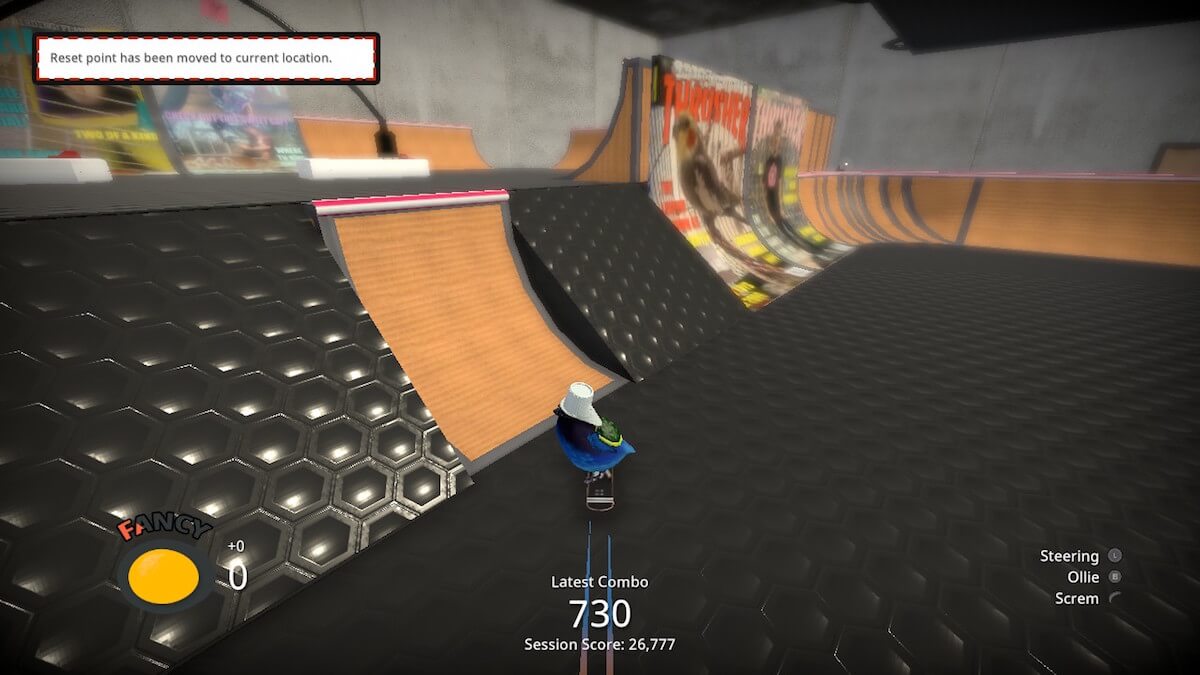 And the accessibility options are also worth mentioning because they make it so that anyone can play it and have fun. While Tony Hawk games might require cheat codes, SkateBIRD sees no shame in making the game easier to manage, and that's a beautiful thing.

For one, you can assign grinding, kickflips and ollies to the same button so you can execute them all with a single button press. You can also adjust the game so that it's very difficult to bail, turn down the balancing difficult, or turn off the balancing entirely so you don't have to worry about it. On the other hand, you can also turn these difficulty options up to make the game even more challenging for yourself, if that's more your speed.

I didn't play with these options until very late in the game, but once I had, I was surprised at the fact that making the game easier for myself didn't make it any less fun. Why shouldn't I turn off the balancing in order to do the coolest, longest grinds across an entire level without stopping? I'm obsessed with the fact that I can turn this on and off at a whim, and play how I want to play at any given moment.

And this isn't exactly an accessibility option, but you can also "birbify" the text to transform it into funny bird language. I didn't keep it on for too long, but it's fun that it's an option. 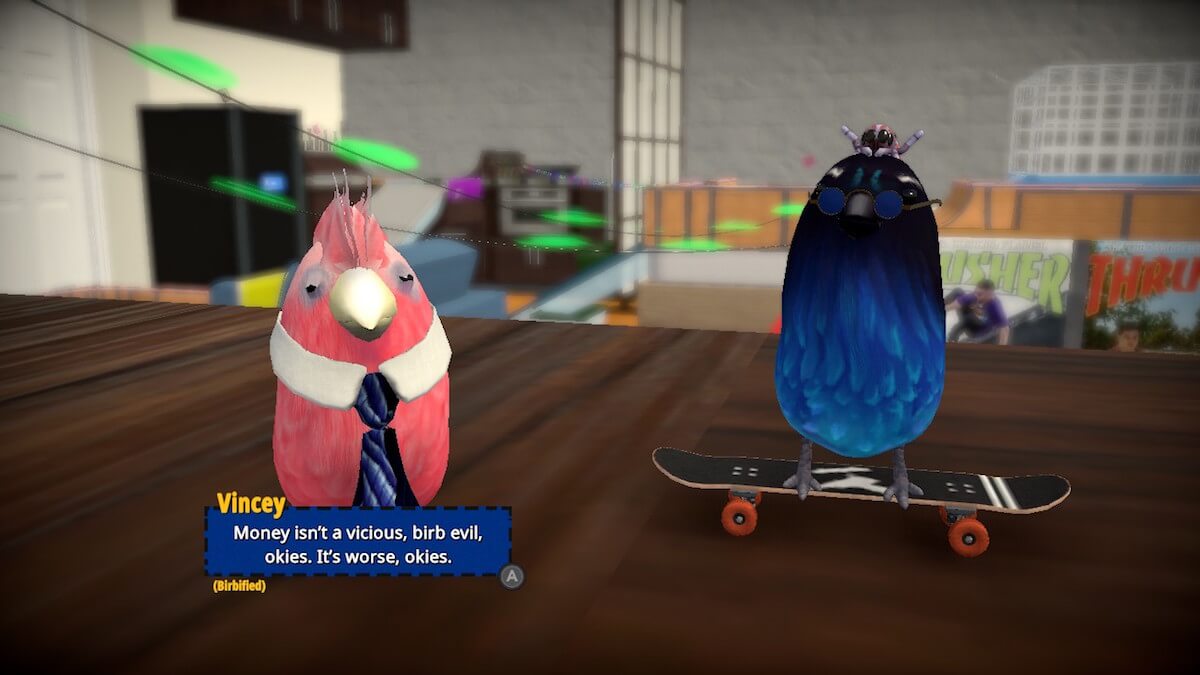 SkateBIRD may take a little bit of getting used to, but once you get a handle on the controls, it's a ton of fun, spanning five big levels and nearly a hundred missions, with loads of collectibles to find in between. The skating is satisfying and accessible for players of all skill levels, and if you're not charmed by the bird characters and the world they live in, I don't know what to say to you!

While I'm still not amazing at the game, I enjoy it enough to keep coming back for more, and while there may be a mission or two that will always elude me (are you kidding with a 200,000 point goal?), I don't intend to stop skatebirding any time soon.

SkateBIRD will be available on Sep. 16 on Nintendo Switch, Xbox One and Steam for $19.99.

Want to find out more about the process behind the ingenious game? Click HERE to read our interview with SkateBIRD creator Megan Fox.