My mom has always wanted to go skydiving, so years ago, I promised her I would go with her for her 60th birthday, as I would be turning the big 3-0 just a few weeks later.

At the time this just seemed like one of those things we both said we would do, and not a pact that we would actually keep—but much to my surprise, as our landmark birthdays drew near, my mother informed me that she would be coming to visit me in L.A., so we could fulfill her birthday wish. 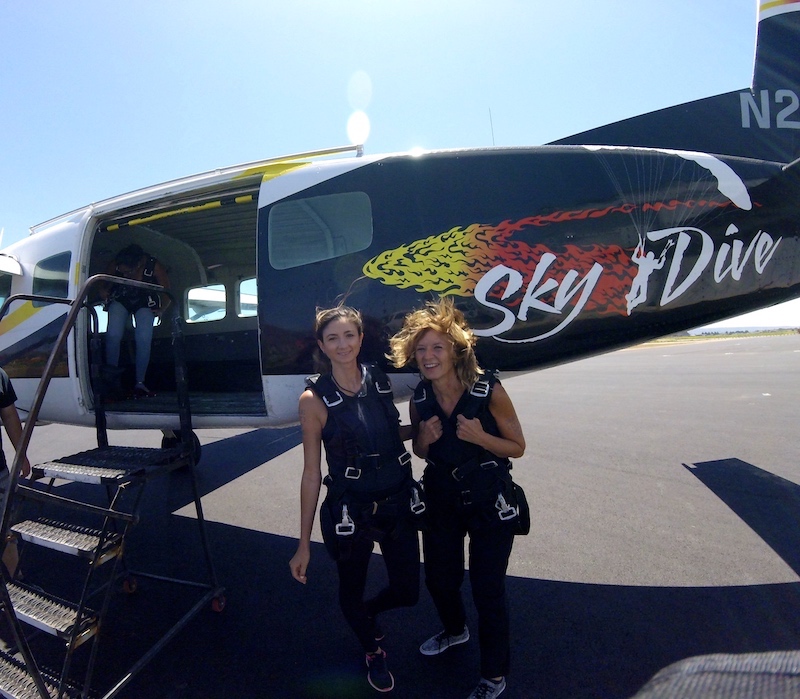 We decided to go to Skydive Santa Barbara because I had already seen a friend complete a jump there, so I felt it was safe, and it promised views of both land and sea during the jump. If I was going to willingly jump out of a plane, I definitely wanted to have a good view!

On the nearly three-hour drive from L.A. to Lompoc (the hangar is actually slightly outside of Santa Barbara) I went through a series of emotions: excitement, denial and, as we got closer, pure terror.

Upon arrival we were taken to a small room where we had to sign legal documents acknowledging that we were putting our lives at risk and that even if we died, we could not sue the company for any reason. As we were signing about 10 pages of legal documents, we watched a 20-minute video reinforcing the fact that we could die and we could not sue if it happened—comforting!

Next, we purchased our skydiving packages. You have a choice of jumping from 18,000, 13,000 or 8,000 feet, and we decided on the middle package. You also have a choice of getting still photos, a video or both, which would be taken by your tandem skydiver. We both decided on still photos—I didn't want to see video footage of myself screaming/looking weird from the extremely high-speed winds warping my face.

After a short wait, we were brought into the main hangar area where we suited up in a harness-like contraption and meet the people who would be jumping with us (unless you are an experienced skydiver, all skydives are done tandem style, meaning you are very tightly secured to someone who is an experienced skydiver). My tandem skydiver, Casey, informed me he had done over 3,000 jumps, so I knew I was in good hands.

Even though I didn't actually think I would die or get injured—I already inquired about how many people had died at Skydive Santa Barbara and was relieved to know the answer was zero—I was still scared out of my mind. My mom actually didn't seem as nervous as me, but I couldn't tell if she was staying calm to keep me calm.

Once everyone in our plane was suited up, we were taken to a very small plane, which we rode up to 13,000 feet for our jump. I was afraid to look out the window but finally did at around 4,000 feet, and was dismayed to be informed that we were less than a third of the way to our final altitude. It already seemed extremely high! I was definitely freaking out at this point, and asked Casey if anyone had ever passed out mid-air. Once again the answer was no, so I felt a little better knowing I would (most likely) not faint on the way down.

Finally we reached 13,000 feet—and it was high! I am talking above-the-clouds high. The plane door opened, and before I knew it, two of the solo skydivers were standing at the edge and soon disappeared out of the side of the plane. Everything happened in a matter of seconds after that.

Next, my mom and her tandem partner scooted to the door's edge and disappeared out of sight. Then it was my turn. Fortunately there was no time to think about what is happening—because if there were I probably would have backed out at this point. Casey scooted me to the edge of the plane, and tipped me over. There was no jump, there was no moment to realize what was happening—one moment I was safely in the plane, and the next I was literally freefalling towards the ground. 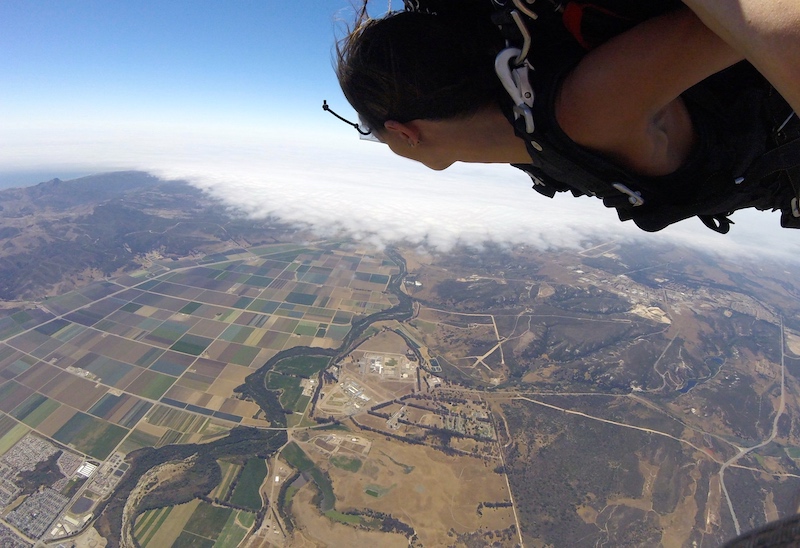 For the next 50 to 60 seconds, I was literally free-falling, without a parachute to slow me down. I was a slave to gravity, and it was pulling me down fast. Friends who have gone skydiving before told me that free-falling was their favorite part of the experience. Despite what friends have told me, I did not enjoy the freefall. It was terrifying. I closed my eyes for most of it, wanting it to end. After what seemed like an eternity (but was actually less than a minute), Casey pulled the parachute cord and we began floating down at a much more doable pace. I could finally breathe, relax and enjoy the incredible views. 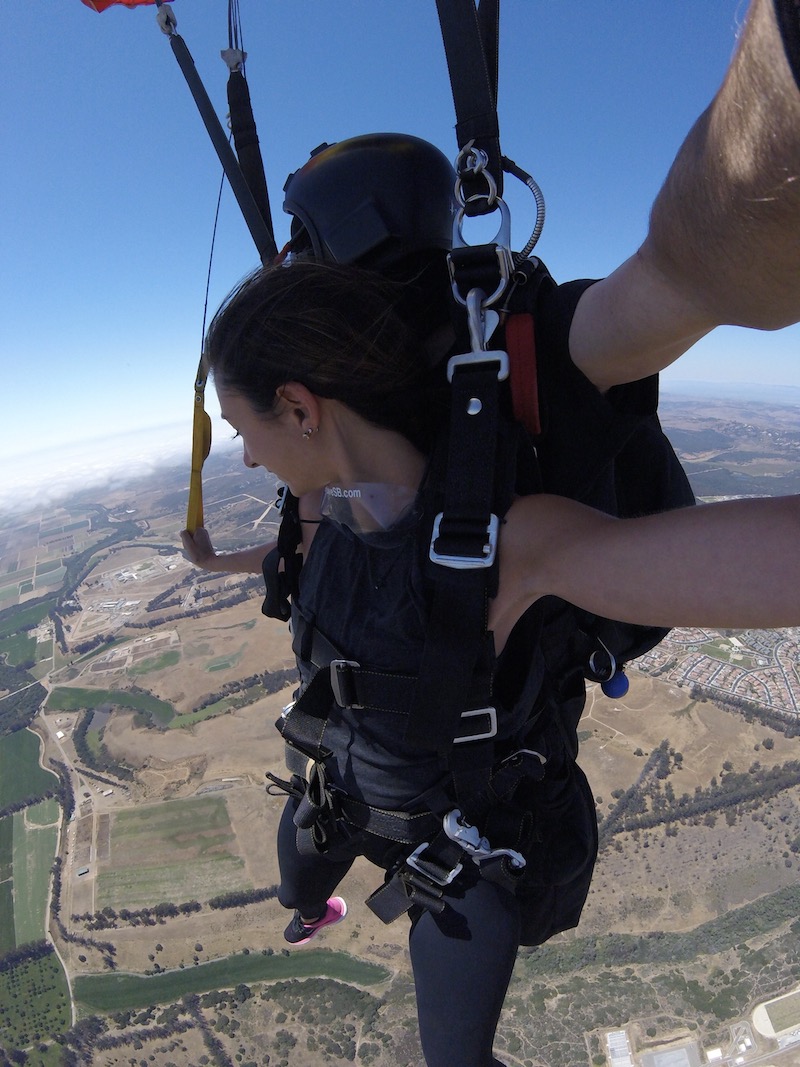 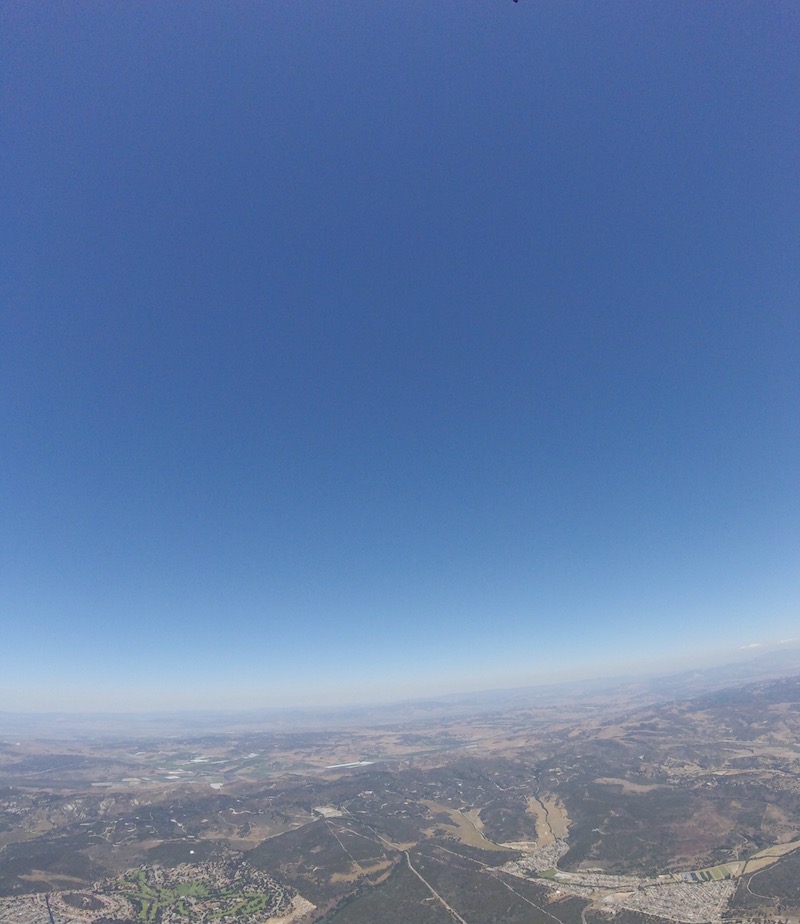 While I really enjoyed the parachute part of the fall, my right ear popped during the initial descent and it was killing me. The pain was detracting from my overall experience, but I focused on not letting it overshadow the thrill that I was actually skydiving. I jumped out of a plane, and now I had an amazing bird's-eye view of the world below. 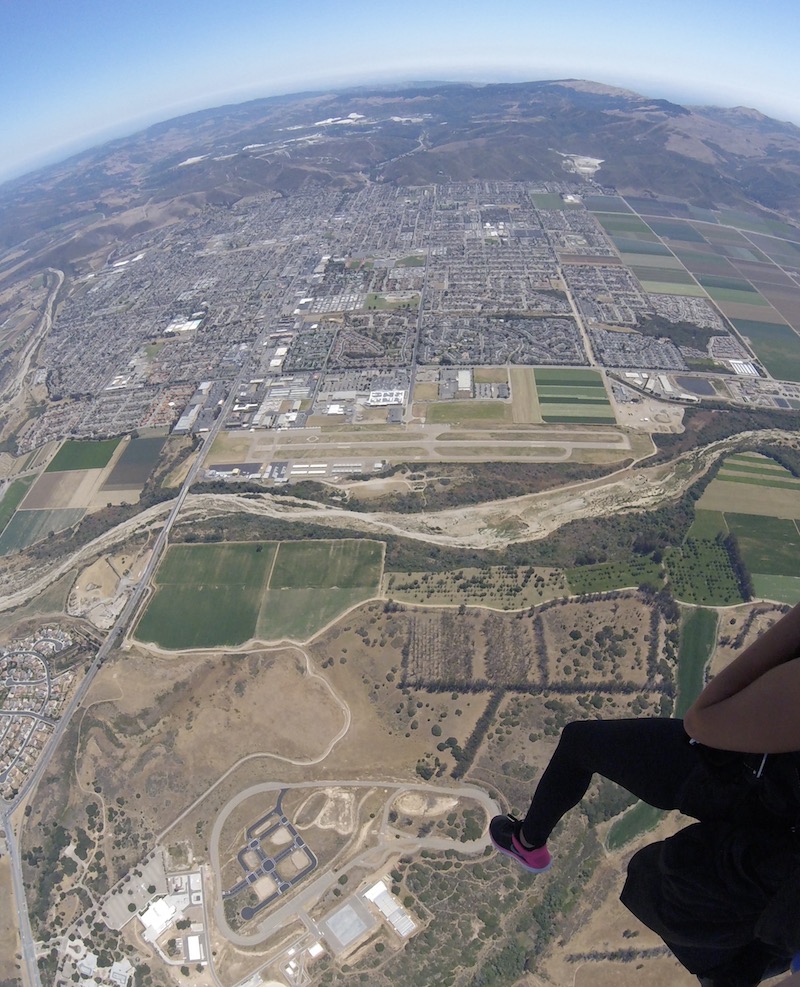 The whole descent probably lasted less than five minutes, but that was enough for me! I was so thankful to see the landing area come to focus below me, and watched as my mom touched down a few moments before I did. I had never been more thankful to have my feet touch solid ground!

Skydiving was an incredible, one-of-a-kind, bucket list experience, and I am so happy I did it, and that I got to experience it with my mom. With that said, both my mom and I agreed that we will never do it again!

If a road trip is more your speed, HERE'S what to expect when you travel cross-country by car with your bestie.