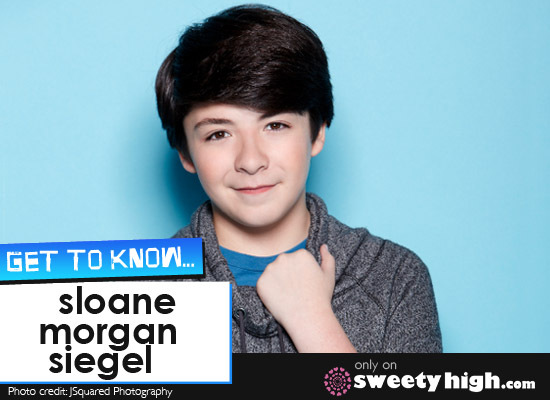 We spoke with the young actor about what it's like to be a teen in the acting business, and about the new pilot that's got the web buzzing for more!

"On some level I've always known I was meant to be an actor," Sloane told us.

From a young age he was extremely outspoken, and he had never been afraid of starting conversations with anyone he met.

One day, he decided to put his extroverted nature to the test and tried acting classes. He found that they suited him well, and it wasn't long before he was also taking part in musicals.

"I had a really great time doing them," Sloane said. "Then my mom found out about this acting school. I got into it, one of 3 out of 300."

When he participated in an international acting competition in Las Vegas he ranked top overall. The experience helped him secure a manager, and his family moved to California to help Sloane pursue his acting dream when he was just 10 years old.

"It's one of the biggest roles in my life and it's my first time carrying a show on my own as the lead," Sloane said.

Sloane had always wanted to star in a family show that didn't rely on slap-stick comedy gags to succeed. He loved the Gortimer Gibbon script because its focus was authentic acting.

"Of all the scripts I've read in my three years in Hollywood this is the best one yet," he said. "I really connected with the characters. It was so much fun working with Amazon and we're all just a big family now."

"It's about three best friends grow up on Normal Street, where nothing is quite normal," Sloane explained. "They uncover mysteries and hidden dark secrets within the street."

In the pilot episode, for example, Gortimer faces off against a toad and a decades-old curse!

Sloane found it pretty easy to relate to Gortimer's character.

Sloane is so similar to his onscreen counterpart that he said he doesn't really even have to act when he plays the character!

But getting to where he is now took years of difficult work. Sloane had a few words of advice for aspiring actors trying to make it in the business.

"Just believe in yourself, work hard, and never give up," he said. "This business is full of rejection and not everyone gets every role."

"I live by that motto," Sloane said. "You always have to put in hard work and lots of training and perseverance and just never give up. Just know you can do it."

You can see Sloane in the pilot episode, "Gortimer Vs. The Frog Of Ultimate Doom." It is now free to watch on Amazon.com, Amazon Prime and Amazon Instant Play!

If you love the show, be sure to join our community at Sweety High to share your very favorite Gortimer Gibbon moments!