I had colossally thick glasses and was a wee bit overweight—which I still blame on my parents' divorce earlier that year. I had just proclaimed Leonardo DiCaprio my one true (celebrity) love and proceeded to watch Titanic every night for two straight weeks. It was also the first year I really remember kids at school being mean to me and getting left out of countless birthday parties. 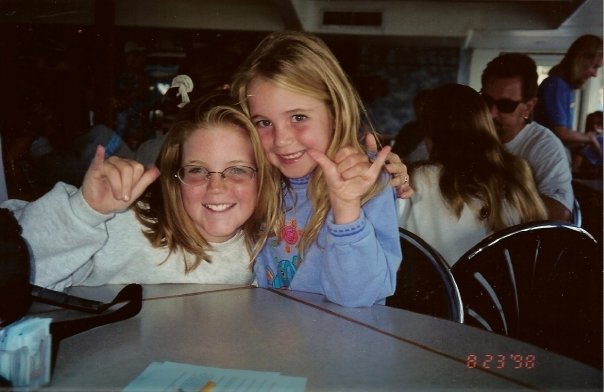 I went to a small private school, and up until the fourth grade, students were required to invite everyone in the class to their birthday party, unless it was a gender-specific party, and in that case, all the girls or all the boys had to be invited. Fifth grade was the first year we were considered "upper classmen" and the newest members to the junior high bracket, which meant no more all-inclusive birthday parties.

There was this group of girls who were always the "coolest." They had older brothers, wore makeup first, had a bra first, got their period first, had their first kiss first… and all I ever wanted was to be accepted by them. I'd been "friends" with these girls throughout elementary school, but fifth grade is where things took a bad turn, and it all boils down to one girl's birthday party.

Her mom had a super cool job. She worked in Hollywood as a producer on a major TV show, and she always had the coolest birthday parties—one year we even visited the set of her show! For her fifth grade party, she decided to have a spooky sleepover, with creepy games, toilet papering the cutest boy's house, and a scary movie marathon with tons of junk food. Oh, and I wasn't invited.

This is long before social media, so I found out the old-fashioned way. Slowly, all the cool girls started whispering one day about a really fun sleepover, but still loud enough so I could hear. Of course, I asked, and the girls just brushed it off and said it was nothing. Over the course of that same week I started hearing more and more about some sleepover party, and then finally, my actual BFF at the time broke the news to me that this girl was having a crazy sleepover party and everyone in my class was invited except me and this one other girl. My heart fell to the floor and tears welled up in my eyes. Oddly, instead of being mad or angry I was totally embarrassed and ashamed. How was I so bad that she felt the need to leave me out?

I remember my mom trying to do something really fun for me on the night of the sleepover. We went ice skating and she bought me this pretty outfit I'd been eyeing, but nothing could keep me from feeling the ultimate FOMO. I was heartbroken. But ultimately, I got over it. I've always had a lot of pride, so I was determined to not let everyone know how much being left out bothered me. I held my head high at school the Monday after and pretended not to care, even though I was dying inside. The interesting thing is because I shrugged it off like no big deal, it really became no big deal.

We LOVE how close @maddieziegler and @kenzieziegler are!! Tag your BESTIE!! ????

This taught me a valuable lesson: We have the power to control the flame. Crying and getting upset only fuels a person's fire, but if you don't give them anything to feed off of, the flame burns out. It took me a long time to recover from all the hurt I went through that year, but in the end it made me so much stronger. And you want to know a fun fact? Those same girls are always hitting me up these days ????.

Have a mean girl in your life? HERE is how to drop a toxic friend.