These Sleep Drinks Helped Me Survive the Time Change

As someone who occasionally experiences insomnia, I'm always willing to try things that will help me catch some Zzzs faster and give me a deeper, more restful sleep.

When I stumbled upon Som Sleep, a drink developed to support sleep, I was definitely curious. I reached out to the company, and they were kind enough to send me some cans to experience Som for myself. 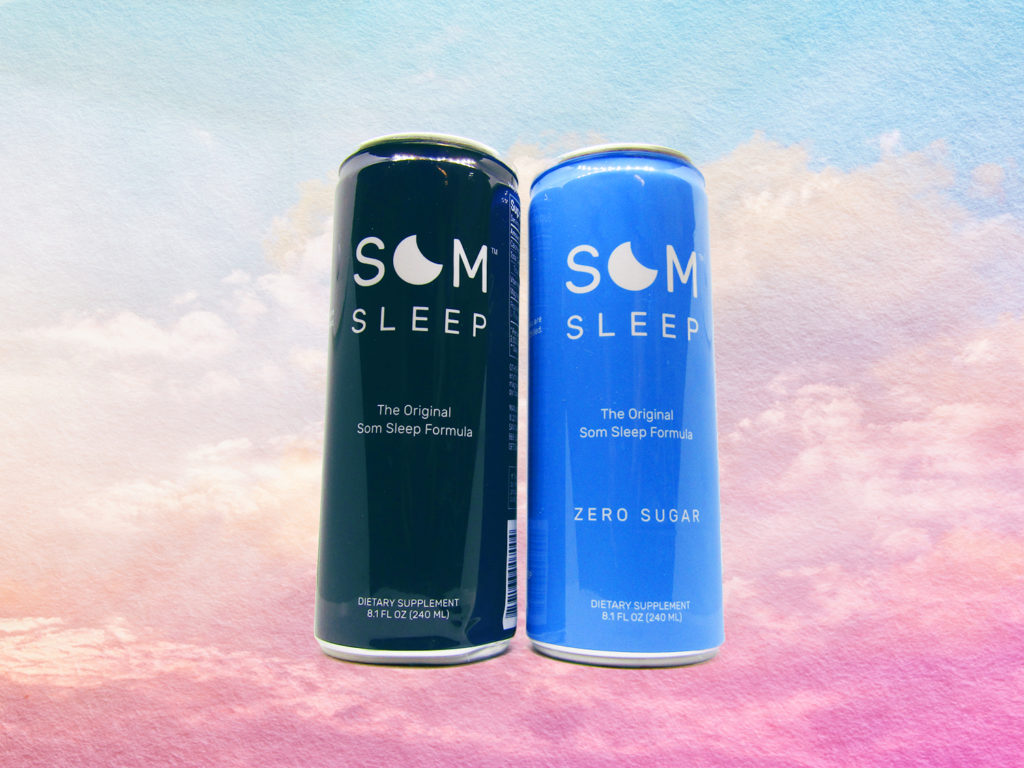 Som Sleep drinks are beverages intended to promote good sleep. Som Sleep comes in two types—standard and sugar-free, and they each retail for about $2.50 per can. By drinking one can about half an hour before your intended bedtime, you can take in all of its fancy ingredients to prepare your mind and body for a great night's sleep.

There are five active ingredients in Som, each with their own sleep-related benefits. Magnesium helps your body produce the sleep hormone melatonin, while Vitamin B6 is meant to help regulate sleep patterns. It also contains L-Theanine, an amino acid found in green tea that promotes relaxation, plus GABA, a naturally occurring neurotransmitter in the body that calms down your brain and helps you relax. Lastly, it also contains melatonin, which as we've mentioned before, is a key player in maintaining a healthy sleep routine.

I had my first experience with Som Sleep on a Tuesday night and opted for the regular version of Som in the darker can first. I hadn't tried it before, so I decided to try drinking it an hour ahead of my usual bedtime, in case it took a longer time to take effect.

Maybe it was because I was reading while I drank down the can, but it took me a while to finish it. It was at least 10 minutes before I'd finished the whole can. They come in 8.1 oz. cans, which can feel like quite a lot to guzzle down.

Once I'd finished, I was already feeling sleepy, so I made sure to brush my teeth and wash my face before getting to bed. I fell asleep unusually fast (and about 25 minutes before bedtime) and woke up the following morning feeling really refreshed.

The following night, I decided I'd alternate between the regular and zero sugar drinks every night, so I wound up drinking the sugar-free version in the lighter can. At 10 calories per can, it has 30 fewer calories than the standard can. It tasted pretty similar to the one with sugar, though it wasn't quite the same, and I didn't like it as much.

Again, after downing the drink, I immediately felt drowsy and wound up getting to bed earlier than I planned.

The next morning, I woke up nearly an hour before my alarm clock was set to go off, feeling well-rested and ready to take on the day.

On Thursday night, I went back to the Som drink with sugar. It seems I timed my drink better this night, because I only started to get sleepy around bedtime. It took me a moment to fall asleep, but it was far less than my usual nighttime struggle.

However, I had to wake up early the following morning, and felt extra groggy when I did.

Note: On Friday night, which should have been night four, I ignored my experiment and didn't drink any Som. I wound up waking up at 3 a.m. and only got back to bed a couple of hours later. I can't tell you whether it was a fluke or the lack of Som messed with my sleep pattern, but it happened!

I took up the experiment again on Saturday night—the night before the start of Daylight Saving Time. Wanting to get a head start on the time change, I drank a can of the zero sugar Som about an hour before my intended bedtime. While I didn't get to bed until just after bedtime, I did manage to fall asleep pretty quickly.

I woke up the following morning feeling pretty good after nine hours of sleep, despite the disorienting nature of the time change.

On Sunday night, I anticipated a big struggle in getting to sleep an entire hour earlier due to Daylight Saving Time. However, having a Som drink half an hour before the new time worked its charms and made me pretty tired by the time I wanted to get to bed. I fell asleep quickly and soundly.

However, the next morning I felt absolutely terrible. In addition to adjusting to the time change, I had to be up an additional hour earlier because I go into the office early on Mondays, so I was two hours off from my regular schedule. I was exhausted and unproductive the entire day.

On Monday night, I was so tired that I contemplated even drinking another Som, but I had a sugar-free one before bed anyway. I turned the lights out almost as soon as I was finished drinking because I was so pooped. Though I did feel a little anxious and restless before bed, I still managed to pass out relatively quickly. I woke up the next morning feeling pretty sleepy, but it was nothing compared to the previous day.

After a week of Som, I felt I was getting a better understanding of when to drink it to fall asleep on time and how it would affect my body. When it came time to go to bed, I initially thought I was falling asleep rapidly, but I wound up jolting awake just as I was dozing off. After that, it took me a while to reset and finally conk out.

However, in the morning, I felt normal again for the first time after the time change. It was a welcome development.

After trying a lot of different sleep remedies that seem to help inconsistently and only a little bit, Som Sleep feels like the real deal. I felt the effects every night I drank them, and most of the time, my drowsiness resulted in a clear mind and quickly falling asleep—even if the drinks couldn't completely save me from the perils of Daylight Saving Time.

Of course, your mileage with Som Sleep will vary. Before committing to them, you'll definitely want to try one and see how it affects you—and probably on a weekend, in case the grogginess lasts. My sister told me she drank a similar sleep drink from a competitor and had to call in sick the following morning because she was still too knocked out to get out of bed.

It's also something you'll only want to drink right before bed. Based on how tired the drinks made me, I can imagine it'd be really dangerous to get in a car after having one.

Drinking Som might not also be practical for everyone. I've mentioned this before, but I prefer to do my nightly routine (including brushing my teeth) way before I go to bed, but drinking something before bed means I need to postpone brushing until just before bed. Also, drinking Som every night could turn into an expensive habit. At $2.50 per can, you could spend nearly $80 a month on Som, adding up to more than $900 over the course of a year.

While I don't intend to make Som Sleep a daily habit, I do plan to keep some of them around for nights when I really labor to sleep. I guarantee they'll come in handy.

If you're looking for a more natural sleep aid, click HERE to read about my experience with sleep-inducing granola bars.