Sonya Esman is a 19-year-old blogger, model and fashionista known by fans around the world for her YouTube and blog under the name of classisinternal. In a recent interview, we asked her about her history with style! 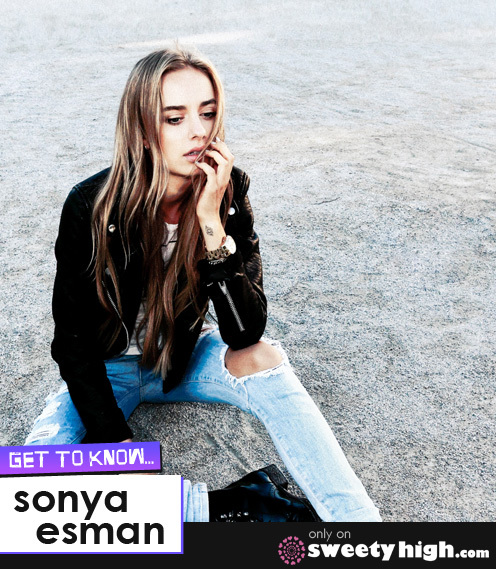 "I remember playing dress up doll games when I was 5 years old," she said. "I would sit for hours online and just create looks for these dolls."

For Sonya, it was always about more than just clothes. It was about how fashion related to people.

"I always loved creating characters, with looks that are coherent to personalities," she said. "I think clothing has an immense power to influence how we feel and portray ourselves to the world."

Sonya was born in Russia, and moved to Canada when she was 5 years old. Though she didn't live in Russia long, she thinks the culture may have had a lasting influence on her in terms of style.

"My mom always put bows in my hair and pleated ribbons through them, put pink tights on me all the time and whatever else Russians tend to do, so maybe that has subconsciously stuck with me," she said. "I think I dress a lot more feminine than the typical Canadian girl my age."

Sonya is best known for her work online as a style vlogger, sharing her experiences and photos, talking about her favorite new styles and more. She's amassed more than 80 million YouTube views and over a million subscribers across her two channels. Her blog as well as her main YouTube channel are called classisinternal.

"I originally wanted to name my channel 'beauty is internal' and make beauty and fashion videos- so my name would be a paradox to my content," she explained.

But when beautyisinternal was already taken, she eventually landed on classisinternal.

Sonya is also a model.

"Being in the position of a model is an incredible experience because I love everything that has to do with fashion," she said. "It's been very rewarding and eye opening to see what happens behind the scenes at shows."

Through her experiences in the industry, not only as an authoritative voice but also a model, she has not only walked the runway at fashion week events, but also sat front row at them.

"I'm lucky that I get to sit and watch shows, and then participate in them," she said. "Not many people see two sides to the story."

Since she was very young, Sonya had also dreamed of being an actress. She pursued that dream, appearing in a number of commercials, TV shows and films.

"It's always amazing to see how much work, creativity and organization goes into a tv-show, or even a little commercial," she said. "It takes days just to shoot a 15 second commercial. It's exhausting."

We asked Sonya if there are any hard-and-fast fashion rules that everyone should live by.

She did, however, hint that long coats and trenches would be in this winter!

Her advice to aspiring fashion gurus and bloggers it to understand their own goals and desires, first.

"Access why you want to be a blogger, and then do it," she said. "If you sit there thinking 'I want to be a fashion blogger like ____' then you should probably reconsider. If you truly love to create posts and take photos, make videos, and be creative via blogging, then you would kind of naturally start doing it."

For even more on Sonya Esman, be sure to follow her on her English YouTube channel here! You can even try your hand and fashion vlogging in our community at Sweety High!