You may have caught Sophia Pippen during her weeks-long stint on Dancing With the Stars: Juniors—or, most notably, you've probably seen her grace your TV screens as the adorable goddaughter of Kim Kardashian on Keeping Up With the Kardashians.

Well, now, the daughter of Larsa Pippen and NBA legend Scottie Pippen is moving away from reality TV (she still loves it, though), and taking center stage as the star of new YouTube series Just My Luck, premiering in June.

You can catch a preview of the imaginative series all the way down below, but in the meantime, find out what Sophia told Sweety High about stepping into acting, why she loves reality TV—and, of course, who she's closest to in the Kardashian/Jenner clan, and what she's learned from them over the years:

Sweety High: How did your partnership with WowWee come to be?

Sophia Pippen: I first learned about WowWee when I was out shopping with my mom. I saw one of their products, Fingerlings, and it looked different than anything I had ever seen before. It was only fate when soon after I was able to become an ambassador for their new brand, Lucky Fortune! I was excited about the opportunity to work with them because I thought their toys were unique.

SH: What made you decide to get into acting? What's been the hardest part of being in that world?

SP: Since a very young age, I've loved watching movies. Every time I watched one, I wished that I could be one of the actors. I decided to enroll in some acting classes to see if I would like it. After just the first class, I knew that this was a true passion of mine. When I was in the class, I enjoyed every minute of it.

One of my favorite parts of acting is having the opportunity to fully immerse myself in a different world and portray a variety of characters who have unique personalities and interests. In my opinion, the hardest part about being in the acting world is memorizing lines.

SH: What have you learned from the Kardashians about appearing on camera?

SP: From the Kardashians, I've learned that it's possible to have fun while working and being on camera. When I've been a part of the filming with the Kardashians, they all seem happy and as if they're enjoying themselves, even though appearing on camera is work for them. When I'm on camera, I feel the same way. I make sure that I'm having a good time and completely allowing myself to enjoy the moment and the role I'm playing.

SH: Who are you closest to in the Kardashian/Jenner clan?

SP: I'm closest to two members of the Kardashian clan, Kim and Kourtney. I love to sleep at Kourtney's house and spend time with her. When I stay at her house, we watch movies together, jump on the trampoline and talk.

With Kim, I enjoy spending the day at the mall. We talk about the latest fashion trends while trying on different outfits. The time I spend with both Kim and Kourtney is special to me.

SH: Has having famous parents made you more accepting of being in the public eye?

SP: I believe that having famous parents has made me more accepting of being in the public eye. Growing up, I always saw my parents living their lives in that world, which allowed me to become used to life in the public eye. It's been a part of my life for as long as I can remember.

SH: What do you relate to most on Just My Luck?

SP: The aspect of Just My Luck that I relate to most is the idea that, when you work together with friends and other people towards a common goal, it becomes easier to achieve. There are many aspects of my life, whether it be during the school day, on the volleyball court, or even just spending time with my friends where it's easier to be more successful when we are working together.

For example, on the volleyball court, if we don't talk to each other and call the ball, then it's more likely that the volleyball will end up on the ground. However, if we communicate with each other and encourage each other, then we're more likely to succeed in passing the ball over the net. This is similar to Just My Luck because when Maya and I both focus on saving the shop and trying to find Agnes, and that's when luck and success start to come our way. 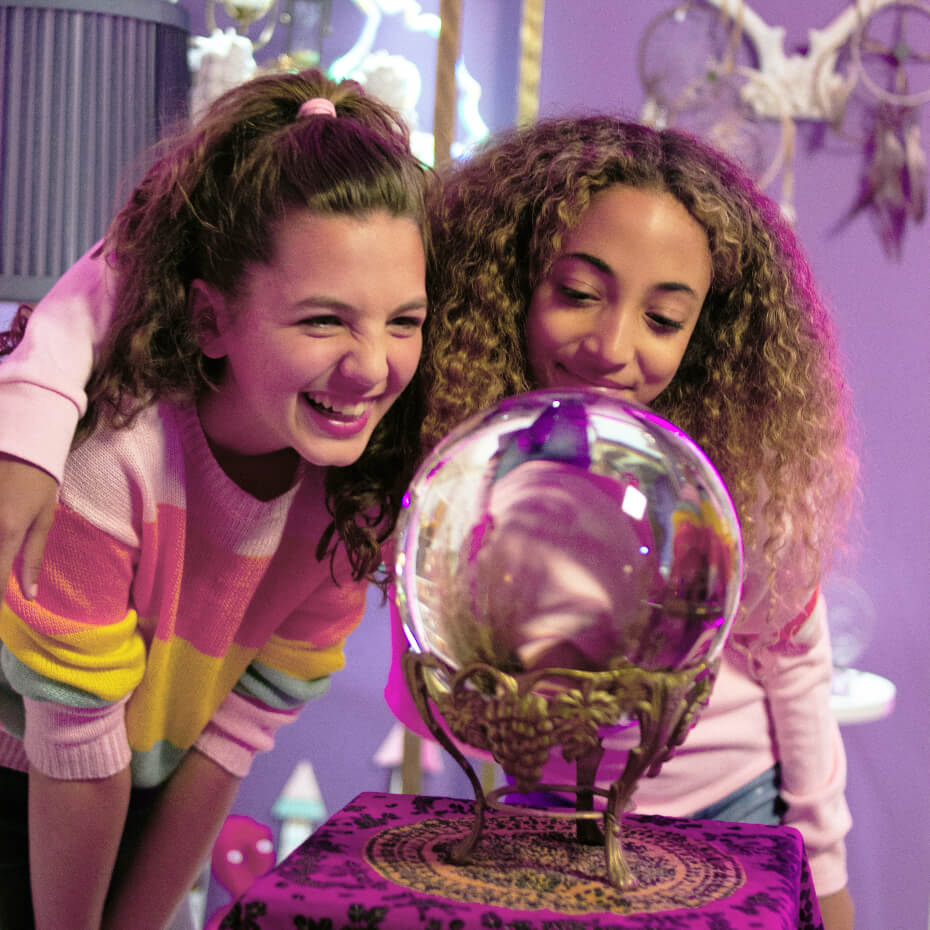 SH: Is there anything that stresses you out or makes you nervous about being in the public eye?

SP: Being in the public eye is something that I am totally used to. I don't get nervous because I feel as though I can be who I am either way. I'm a social person, and I enjoy spending time with and talking to other people. Therefore, I'm comfortable being in the public eye.

SH: What's the craziest thing that's happened to you on set (any set)?

SP: The craziest thing that's happened to me on the set of Lucky Fortune was when I had an allergy attack. I was nervous that when I was on camera I wouldn't be able to control my sneezing, which was not a part of the script.

In need of more Kardashian Kontent? HERE's the Kylie Jenner you are, based on your zodiac sign!