I Visited the All-Felt Supermarket, Sparrow Mart, and Here Are the Most Incredible Things I Saw

When I first saw images of the all-felt supermarket, Sparrow Mart, at The Standard in Downtown Los Angeles, I knew I had to check it out.

It's an art exhibition by British artist Lucy Sparrow showing off 31,000 incredible handmade felt pieces—each one fashioned after everyday items you could find at the supermarket. The whole thing is set up like a real grocery store, complete with carts and hand baskets, because everything in the store is available for purchase.

Originally, the installation was set to run from Aug. 1 to Aug. 31, but this year's event was so popular that they're closing shop a week early, on Aug. 25. I got the chance to pop in on Aug. 24, the day before it closed, and even with the stock dwindling a little, it was as magical as it looked in the pictures.

Though I missed out on a lot of the fun (there was apparently a very popular and adorable produce section that was completely sold out), there were still a lot of incredible things left to lay my eyes upon. Here were a few of my Sparrow Mart sights:

Directly to the left of the Sparrow Mart entrance stands a felt ATM, complete with a felt receipt stating it's from Bank of America and a wad of felt $100 bills in the cash dispenser. Not only is this a nice touch, but it shows me the artist is dedicated to creating an artistic experience from top to bottom. 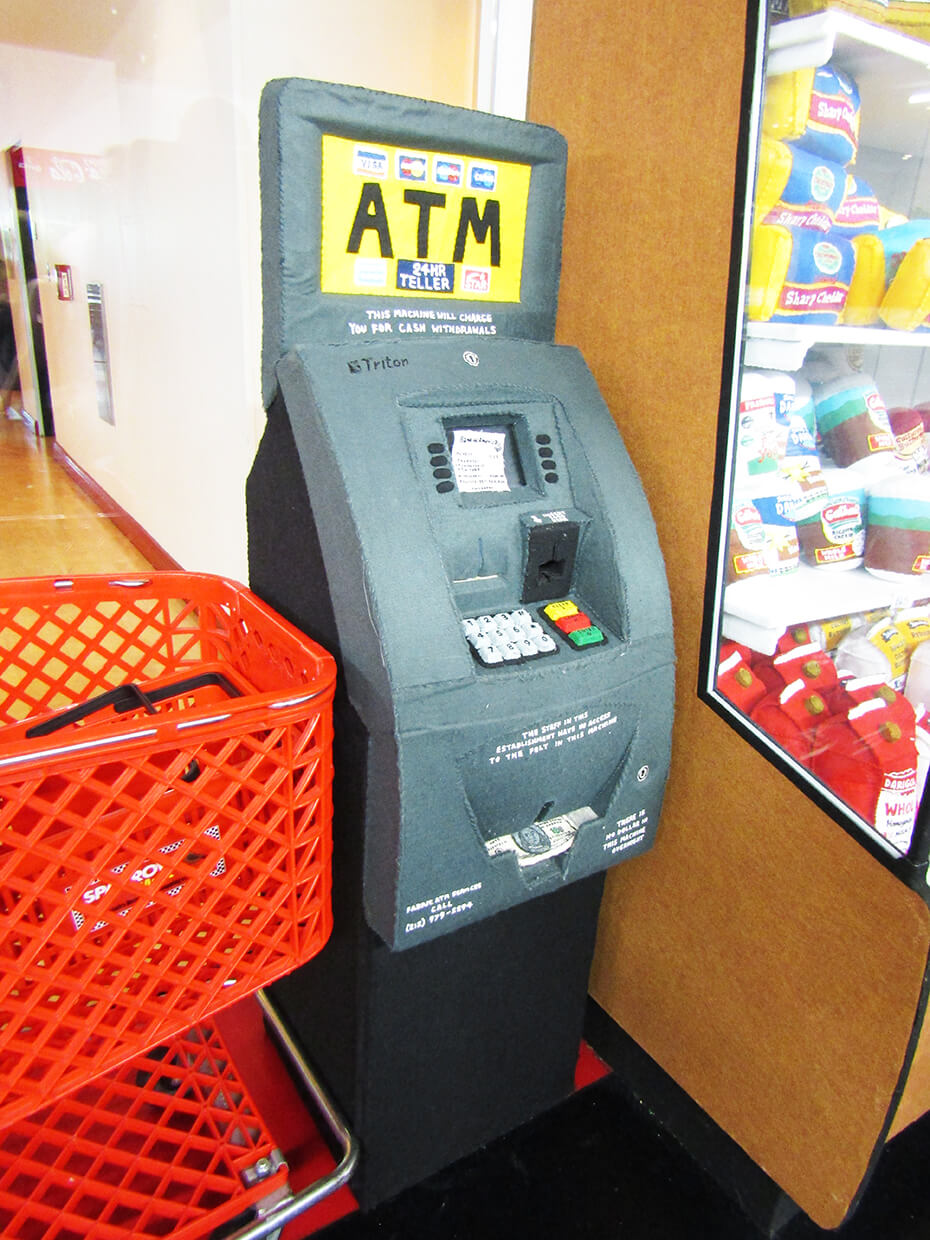 The only reason this incredible display case full of fish fillets, shellfish, octopuses and more is still here in its entirety is because the individual pieces aren't for sale. If you're feeling spendy, you can fork out $50,000 to take the whole case home. 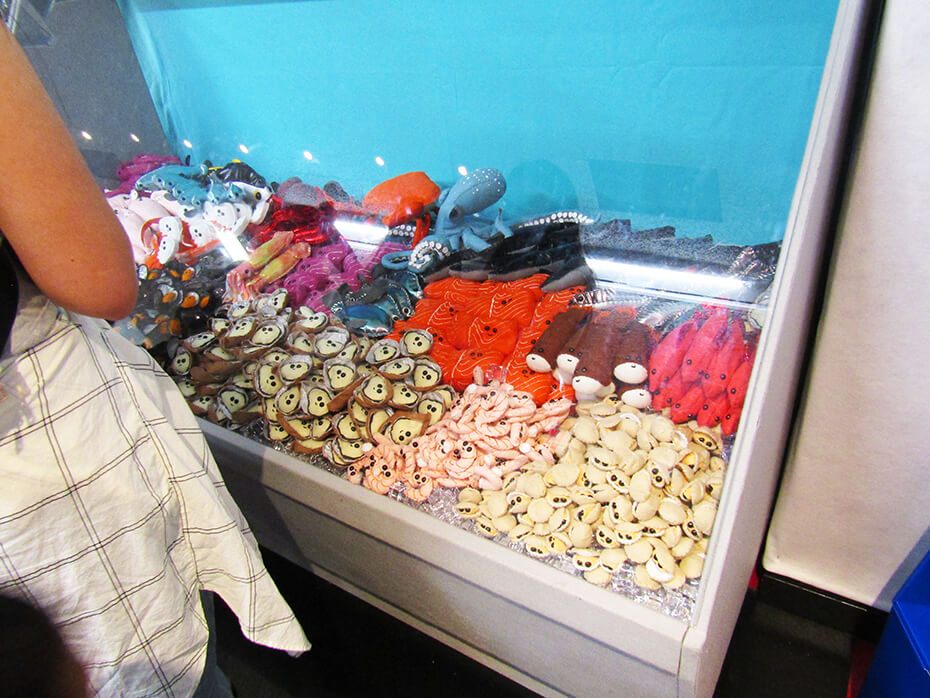 I'm sure the display would have lost some of its impact (or been entirely sold out) if people would've been able to buy individual items. Still, I thought this stuff was super cute, and I would've loved to take home a clam or a shrimp if I could have. 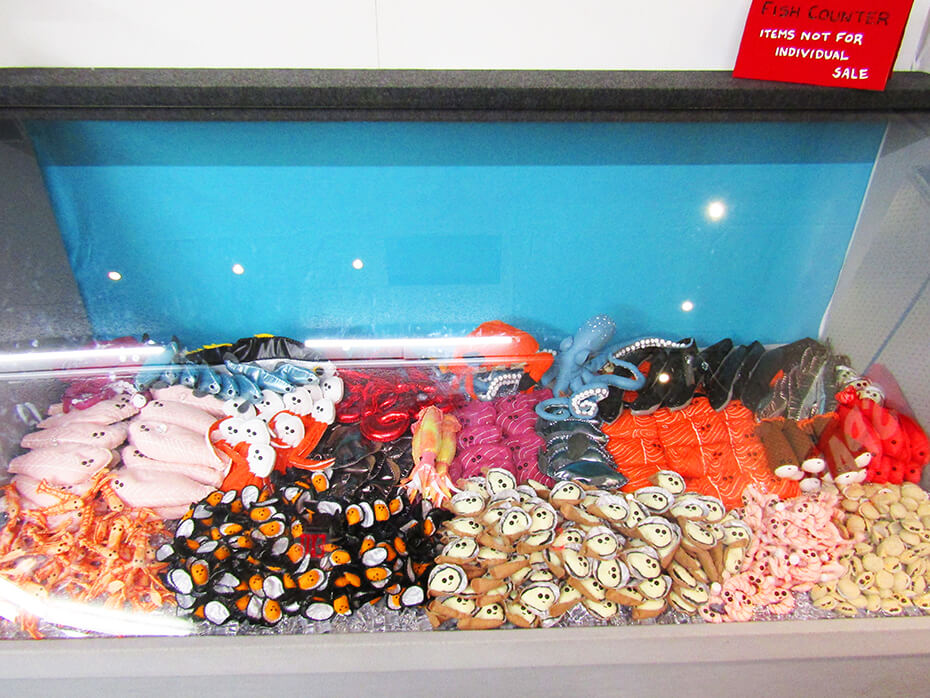 Something about the tiny faces featured on these sausage links and cuts of meat is as morbid as it is adorable. I'd never seen hams look so pleased with themselves. 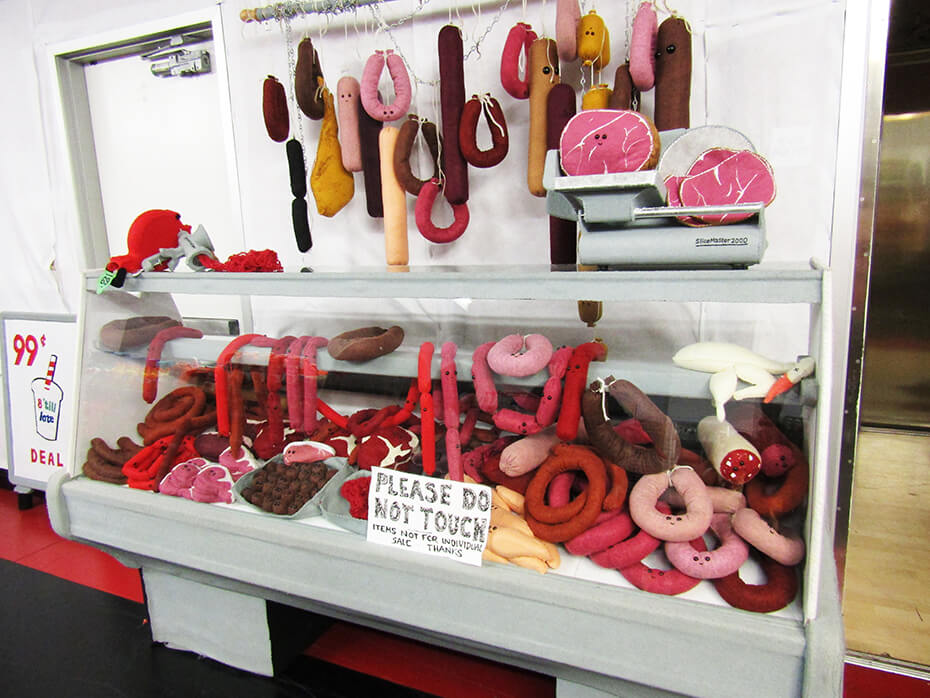 Like the fish counter, this butcher's counter is also only available to purchase if you're willing to take home the whole thing for a giant price. While I could never afford it, this might make a special kind of person really happy. 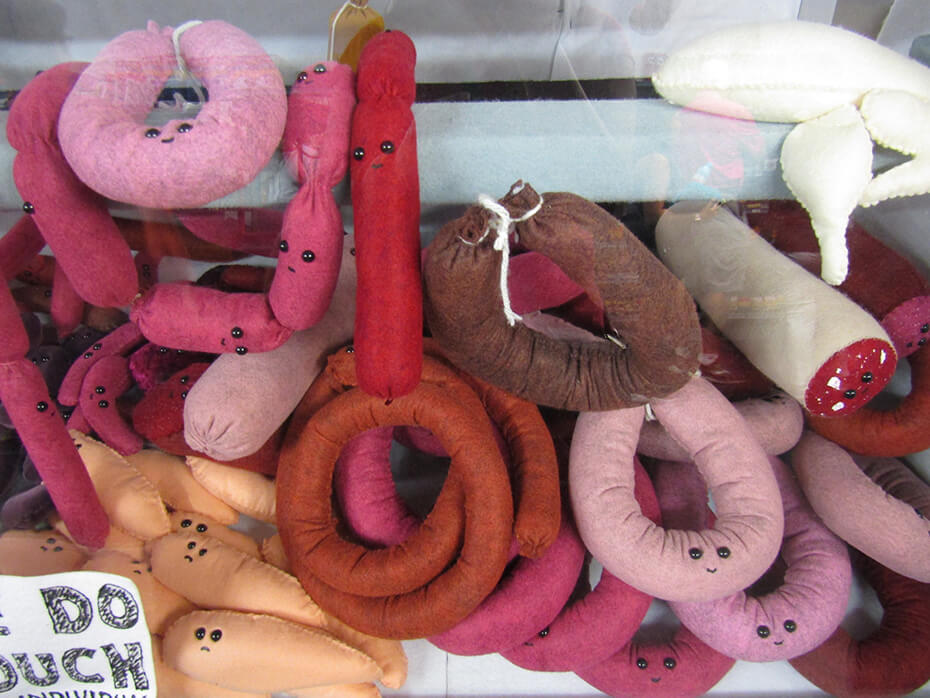 Also, I find these meatballs totally irresistible. I would have gladly forked out $5 to be able to take one home with me. 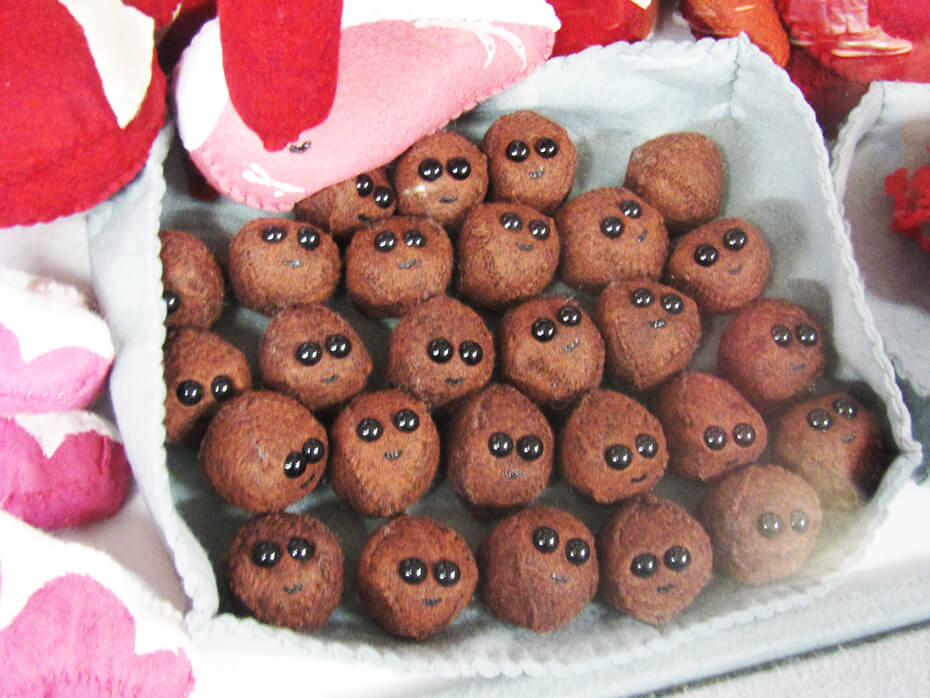 Here's another showcase revealing Lucy Sparrow's amazing attention to detail. Even the freezer itself is made out of felt. 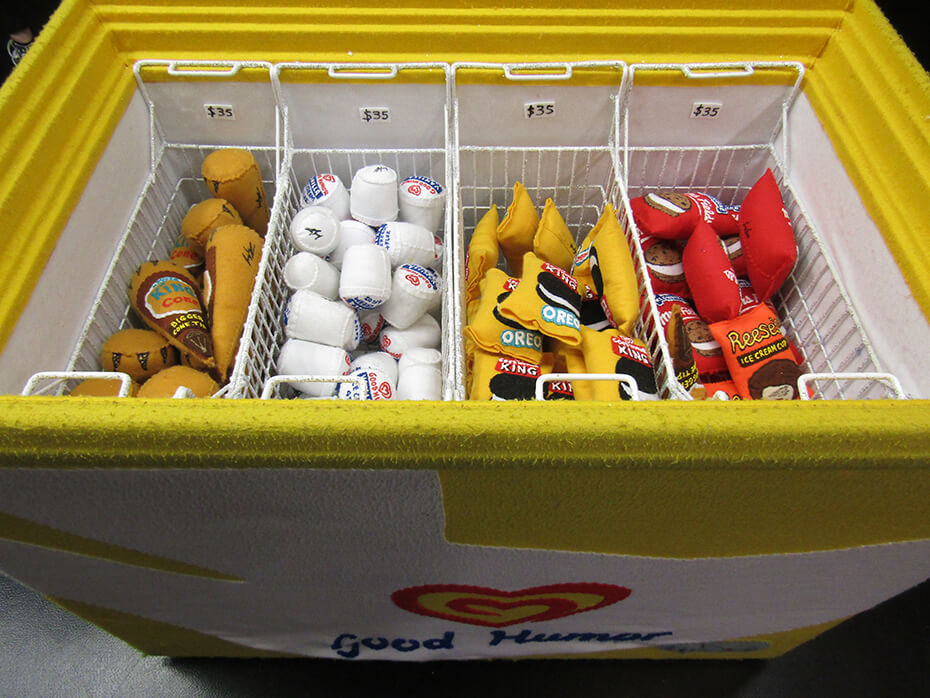 Not only that, but the case includes some truly iconic ice cream sandwiches. I must have been craving ice cream, because this section made me hungrier than any of the others. 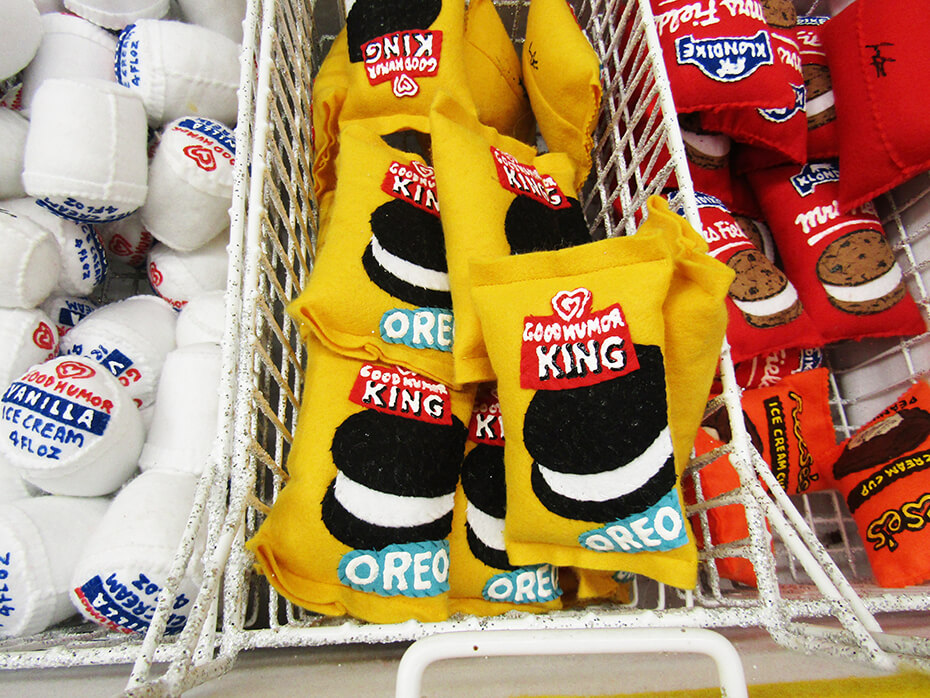 That is a lot of sushi. When I visited, pieces of sushi were the least expensive thing left in the store, available for $10 each, and they were very popular with small children who desperately wanted to their parents to buy them a Sparrow Mart trinket. 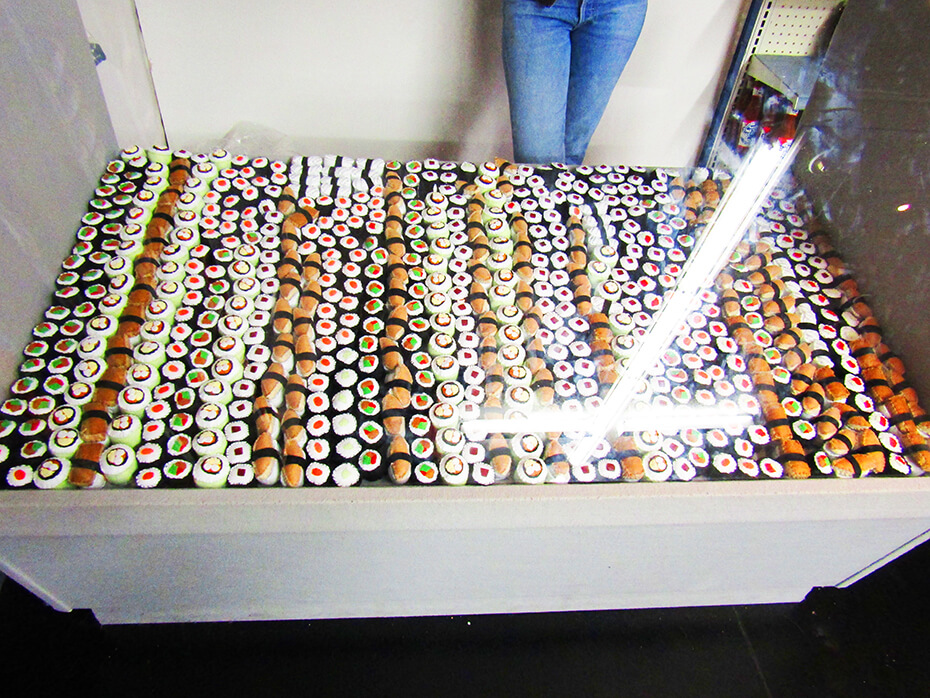 Some of my favorite sections of Sparrow Mart were the ones absolutely packed with recognizable grocery staples, and the area featuring chips and peanut butter jars was one of those. From a distance, you'd mistake them for the real thing, but close-up there's a clear personal touch applied to every item. While I personally couldn't spare $60 for a bag of felt Ruffles, I totally understood why they were so popular. 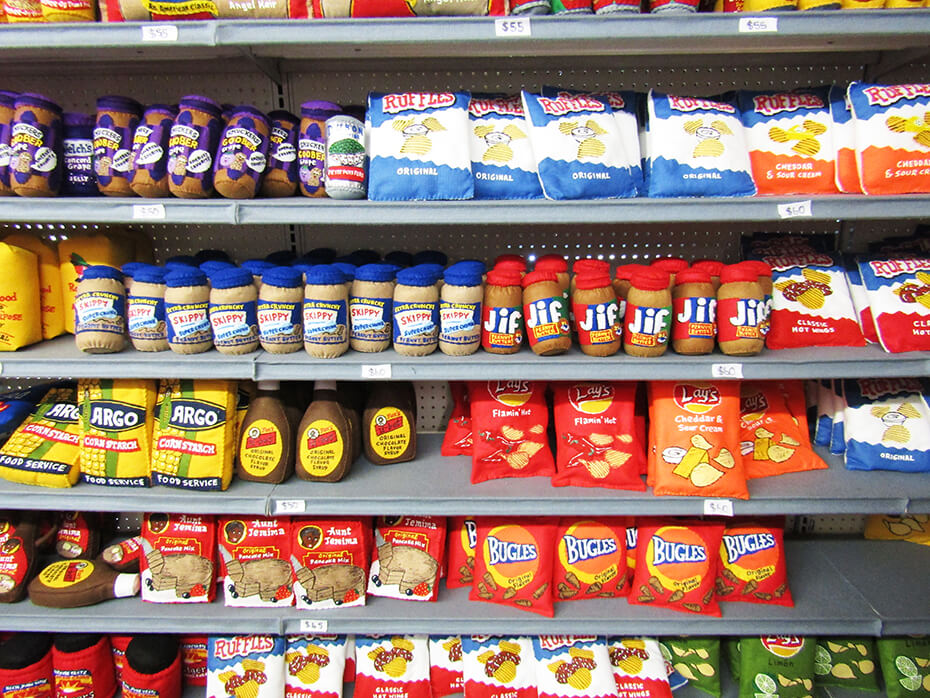 I can't tell you why, but there was something really soothing about looking at all of these fake cans of meat and pie filling and tomato sauce. The imperfections give them a life that normal groceries just don't have. For some reason, I still can't take my eyes off of those Spam cans. 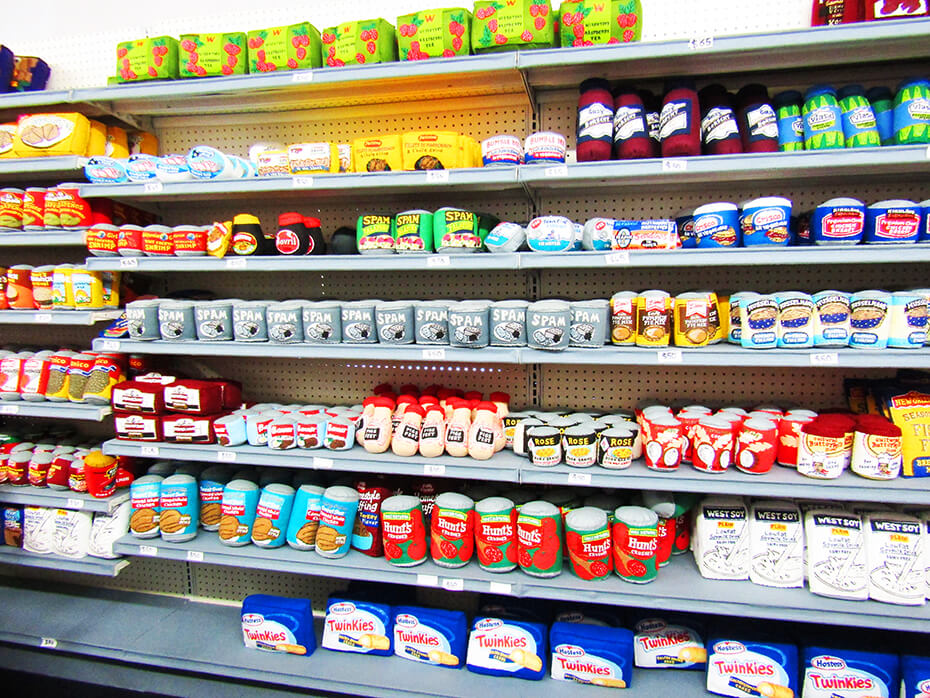 The cereal boxes were another favorite of mine because of the big, intricate designs that usually are featured on their faces. The Cap'n Crunch boxes in particular are all slightly different, acting as a reminder that everything in the store really was personally made by hand, making every object unique and one-of-a-kind. 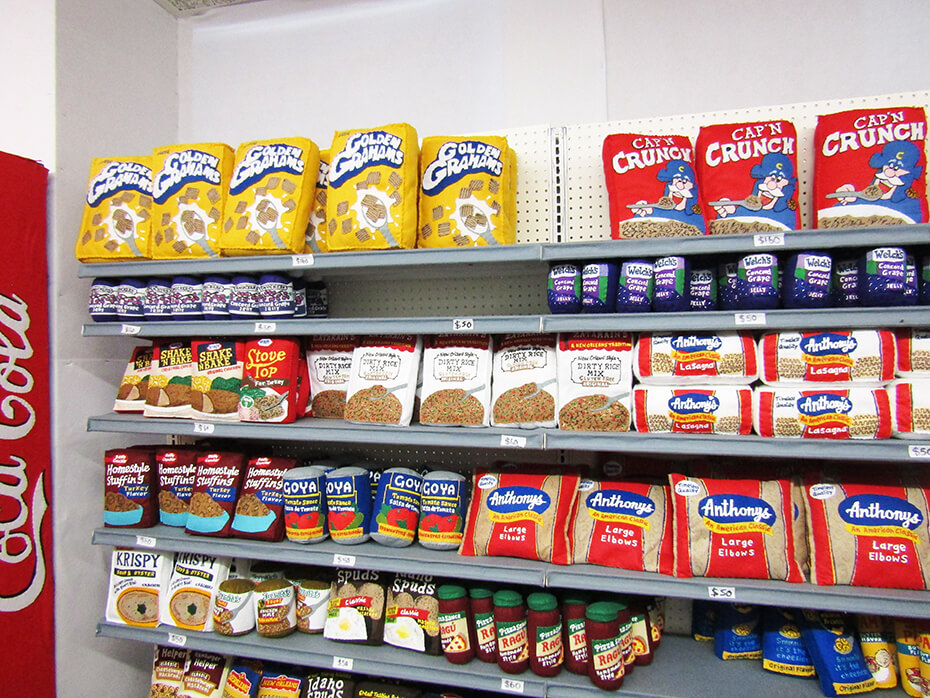 I think I love the soda display fridge because it reveals the sometimes chaotic nature of a grocery store. I imagine that a lot of people grabbed one from the fridge, changed their minds and put them back haphazardly into the case. Just like a real supermarket! 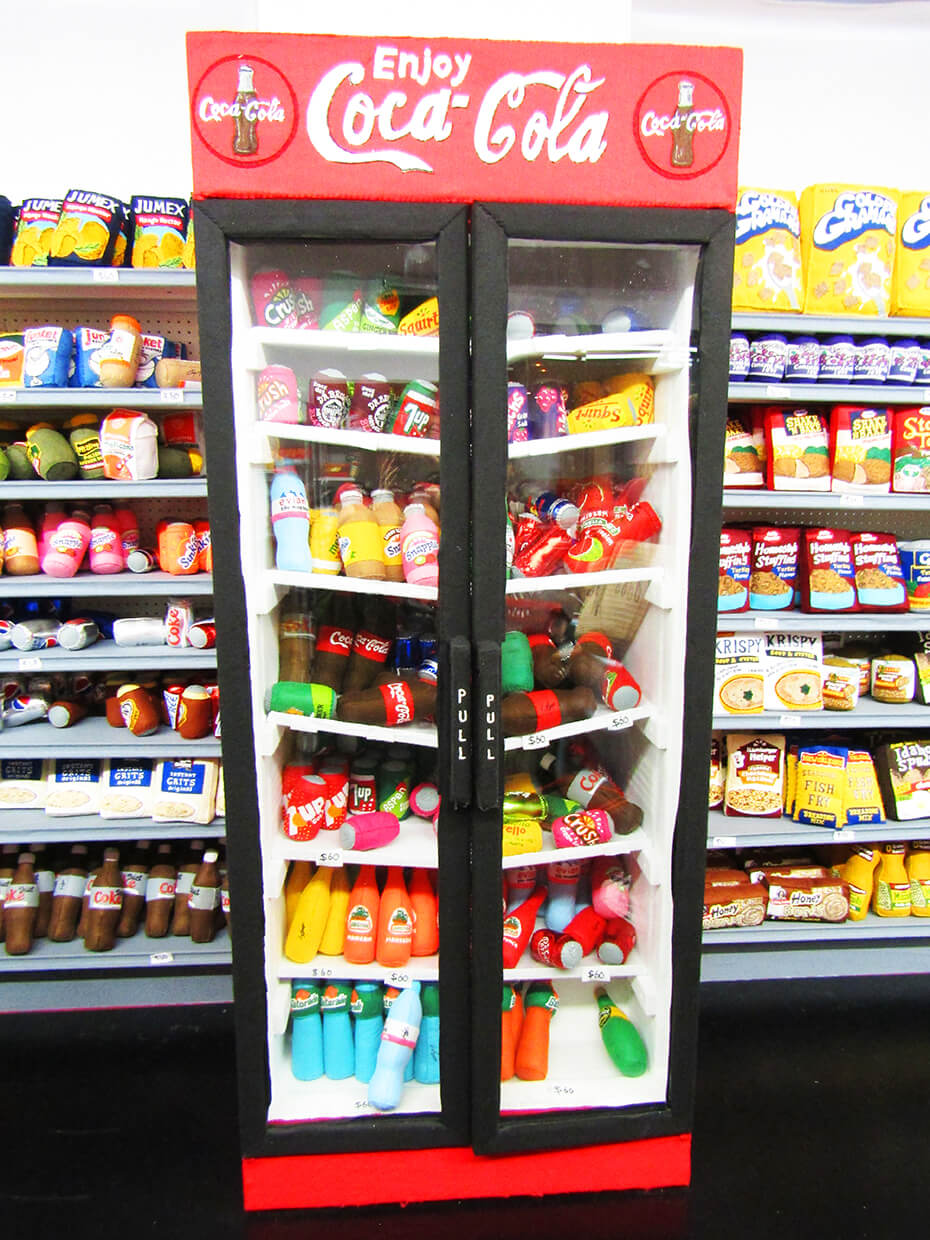 I just love the idea of felt cartons of milk and packs of butter. 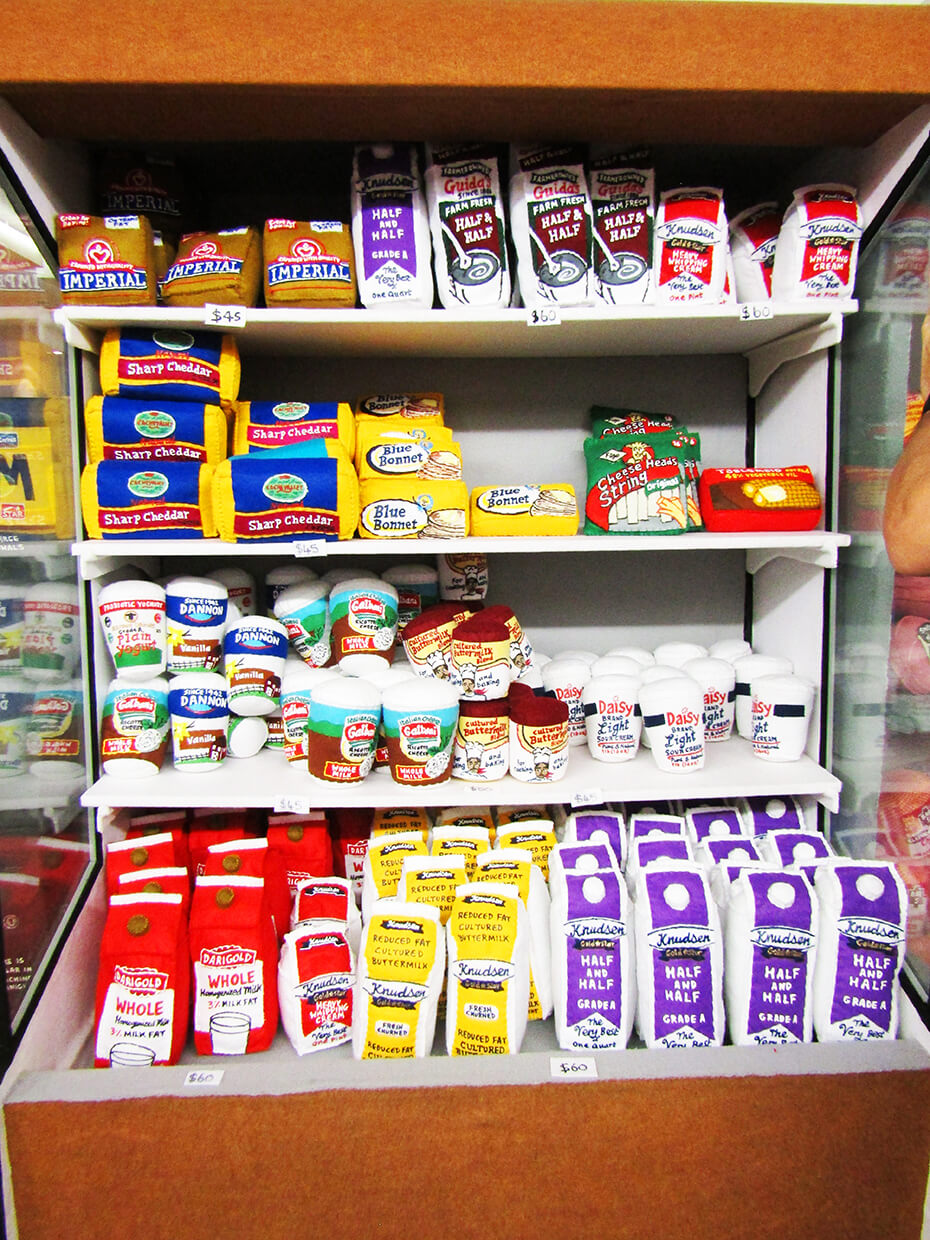 I never knew I could be so inspired by representations of chopped hams and bologna, but these ones are special. The way Lucy Sparrow represented the packaging for both is totally inventive and way too cute. 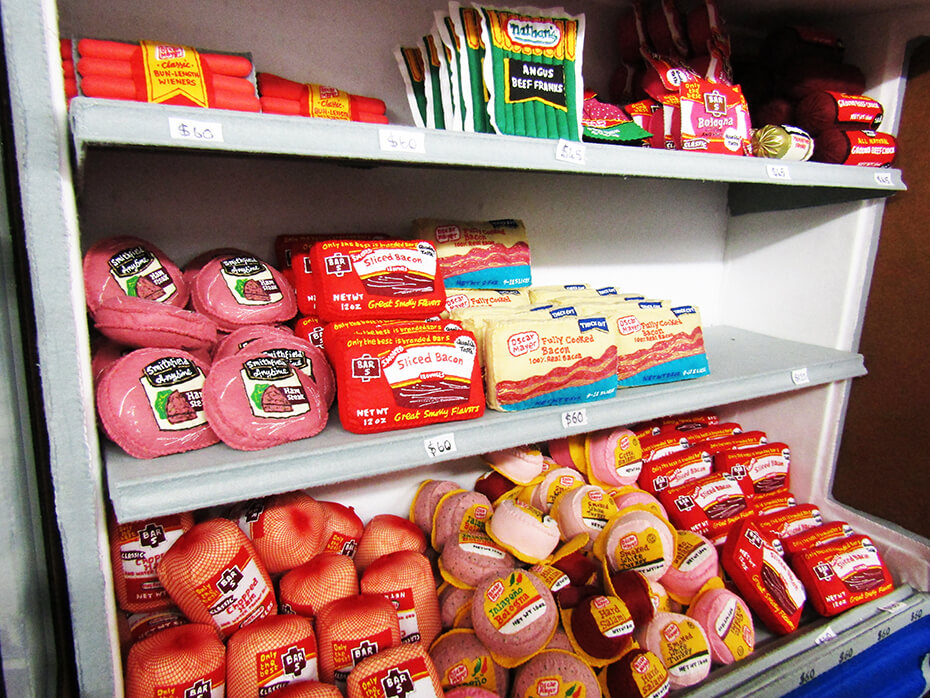 And with the meme status of bacon, I'm surprised these were still there. Every detail is just right. 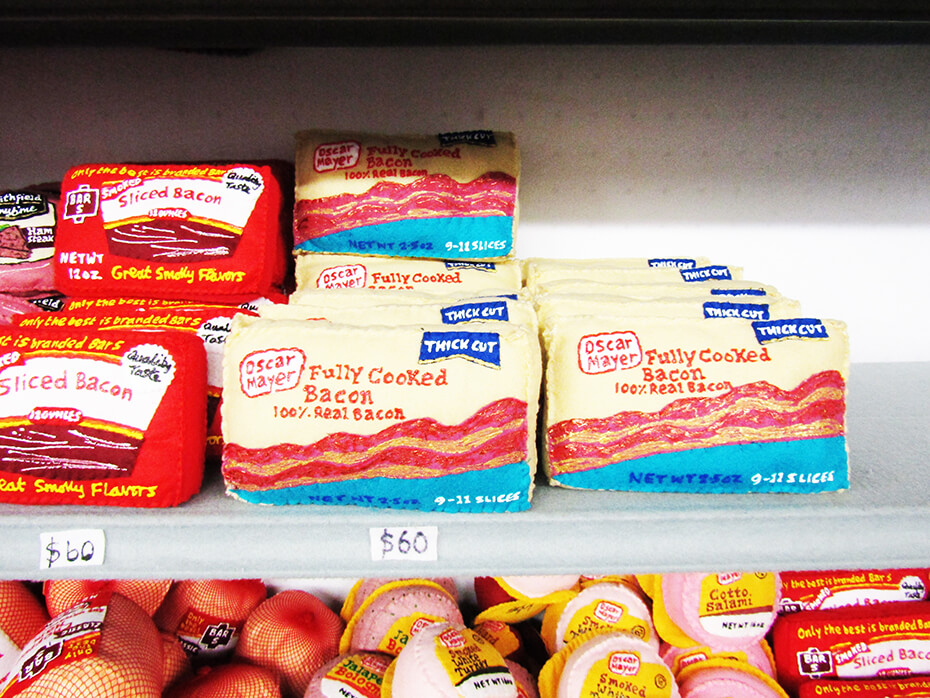 This section kind of freaks me out because you could probably replace the real stuff in a grocery store with these felt items and I'd walk right past it without ever noticing. And I used to eat a lot of Tina's Burritos when I was a kid, so I was too excited to see them represented here. 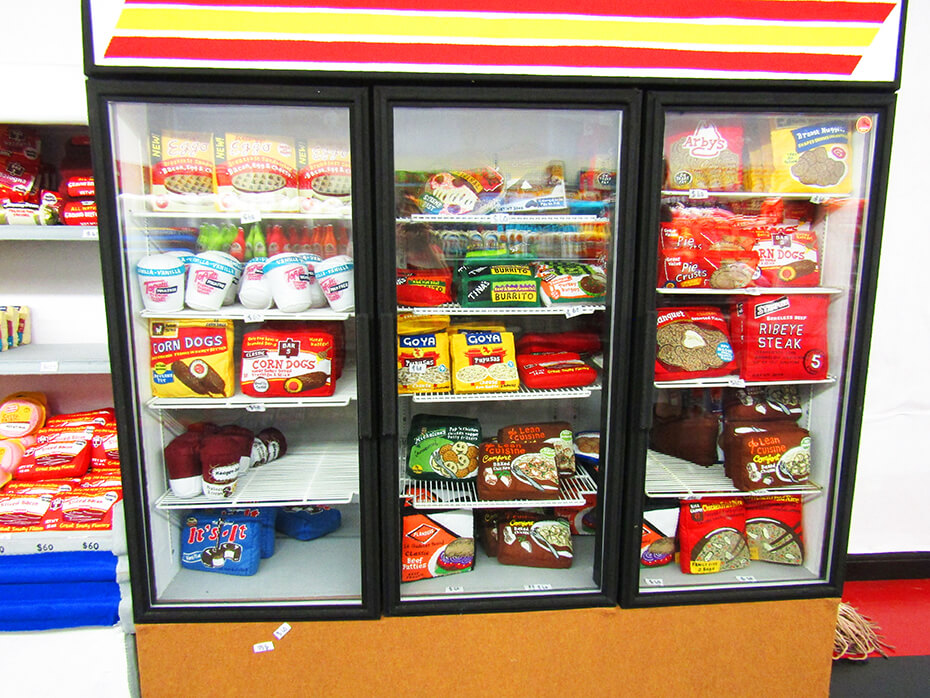 Sparrow Mart obviously wouldn't be complete without a section dedicated to candy, and they don't disappoint. These shelves are well-stocked with chocolate bars of all kinds, and at $35 they were one of the less expensive items on display while I was there. 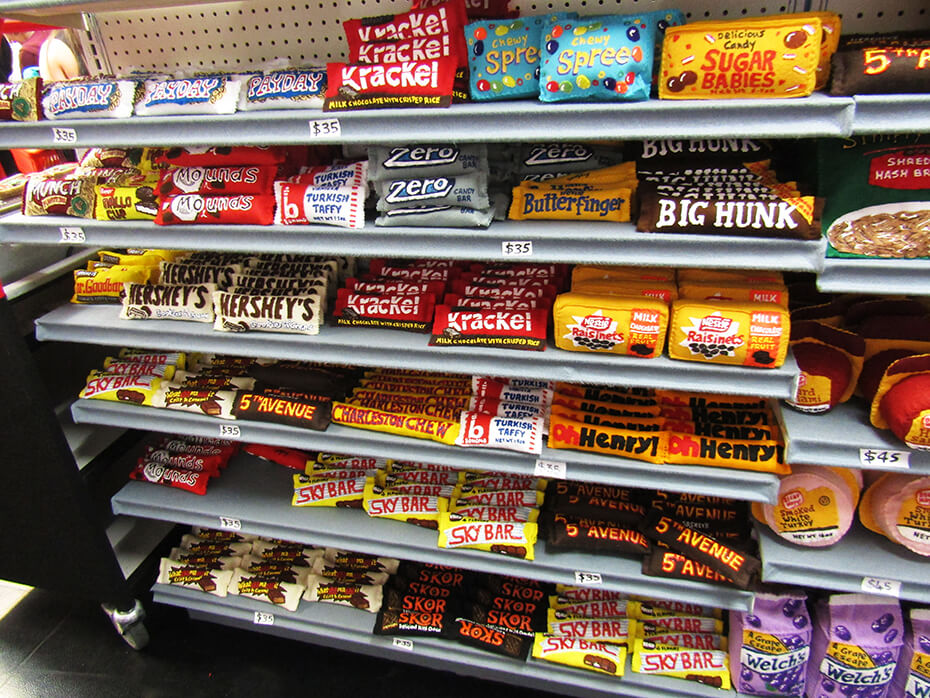 Some of that letter work must have taken some time to complete. It'd take me an hour to make one of these, and I really can't imagine making 31,000 different things. 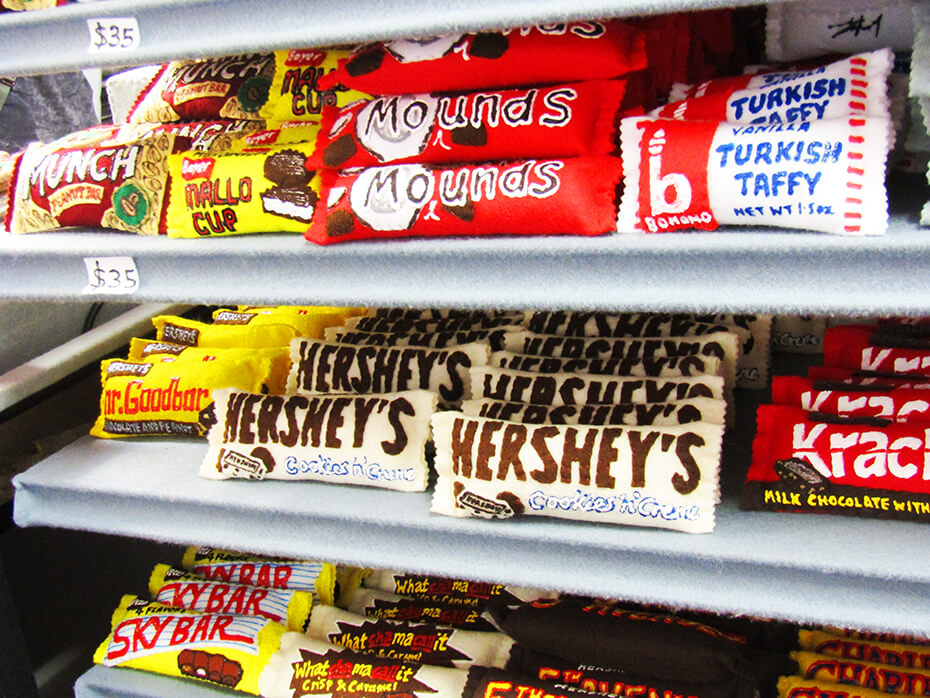 I don't know if there's a better name for this, but I call it the impulse buy section. It's that rack of candy and gum right next to the checkout counter that tempts you with stuff you would've never grabbed if you weren't about to leave the store. No grocery experience is complete without it, so I adored seeing that represented in Sparrow Mart. 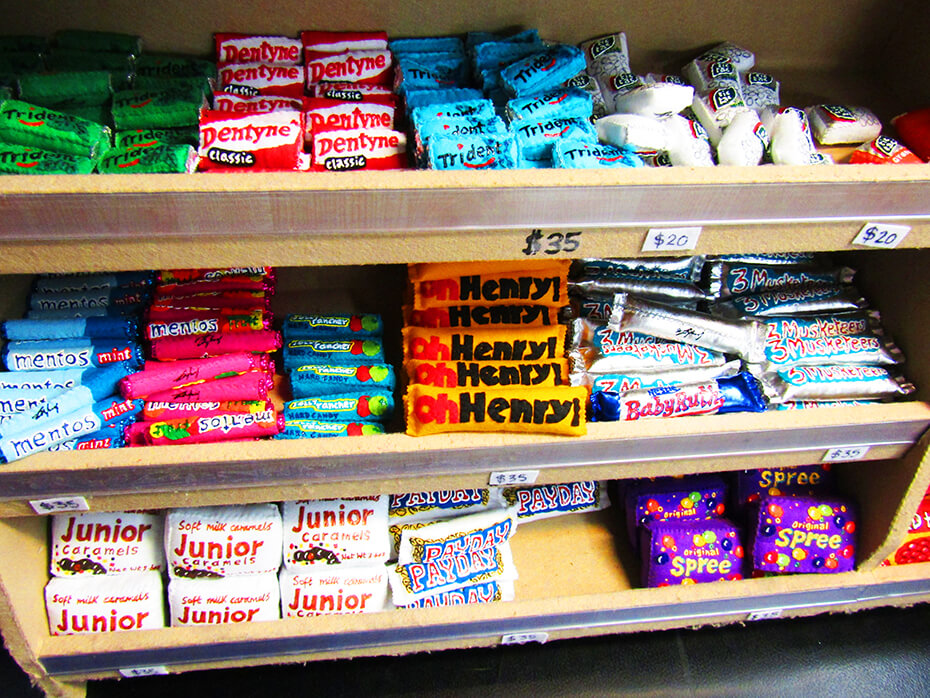 To one end of Sparrow Mart was a gallery of items in framed display cases. Though everything in the gallery is pretty pricey, they're definitely more substantial than some of the individual pieces featured in the mart. While everything in the gallery was worth perusing, my favorite was this rainbow of Heinz ketchup bottles. If I were a millionaire, I'd totally buy it. 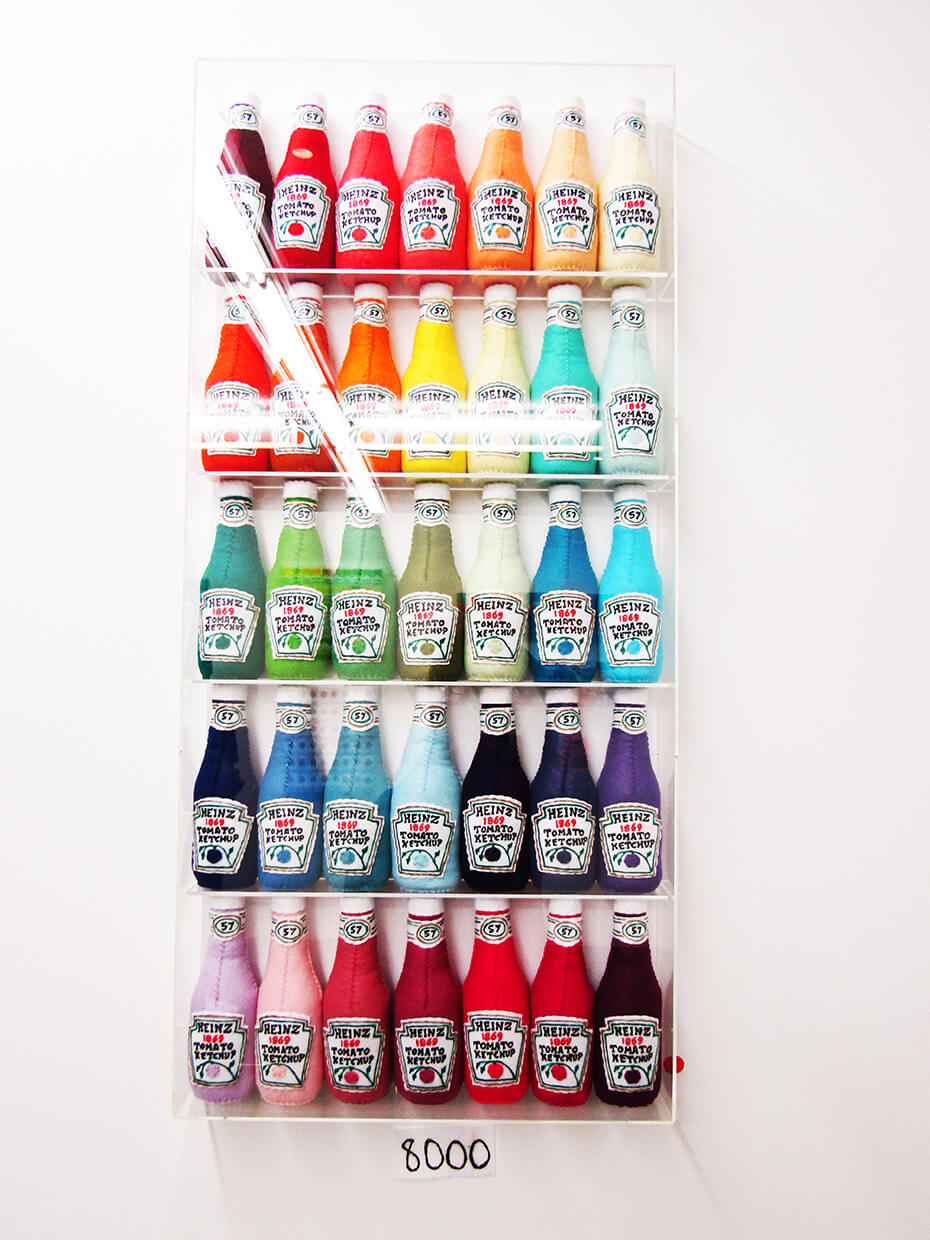 If you can't make it to Sparrow Mart yourself, click HERE for the most Instagrammable museums out there.