I Wore a Stress-Relieving Spire Stone for a Month, and Here's What Happened

Stress is an unavoidable part of life, but that doesn't mean you have to let it control you.

Spire Stone is a wearable tech tool that's designed to help, guiding its users to calm before the negative effects of stress ever get the chance to set in. I was curious to see how a calmer outlook might change my life, so I reached out to the creators of Spire Stone, who were kind enough to send me one for review.

Spire Stone is a wearable device that monitors your breathing throughout the day in order to help the user recognize and prevent stress. By analyzing the expansion and contraction of each breath, it knows when someone is calm, focused or tense, and when stress hits, it alerts the user so they can take steps to reset their nervous system before it really kicks in. Through using the Spire Stone, not only can you nip your tensions in the bud, but you can also find out what stresses you out. Not so bad for a little rock you clip onto your clothes.

When I took my Spire Stone out of the box, I just had to make sure it was all charged up (it took less than a couple of hours). Then I downloaded the app and it was ready to go. I booted up the app and clipped the stone onto my jeans, ensuring that the stone-shaped bit was pressed against my skin, and was met with a quick audio introduction on how to use the Spire Stone.

A deep, soothing voice talked about the negative effects of stress and how taking big, slow breaths can counteract them. A visualization of my breath showed me just how slowly to breathe in and out to put my body into a state of calm. Maybe it was all in my head, but my mind felt clearer and my thoughts stopped jumping around as much. The breathing seemed to immediately take effect. 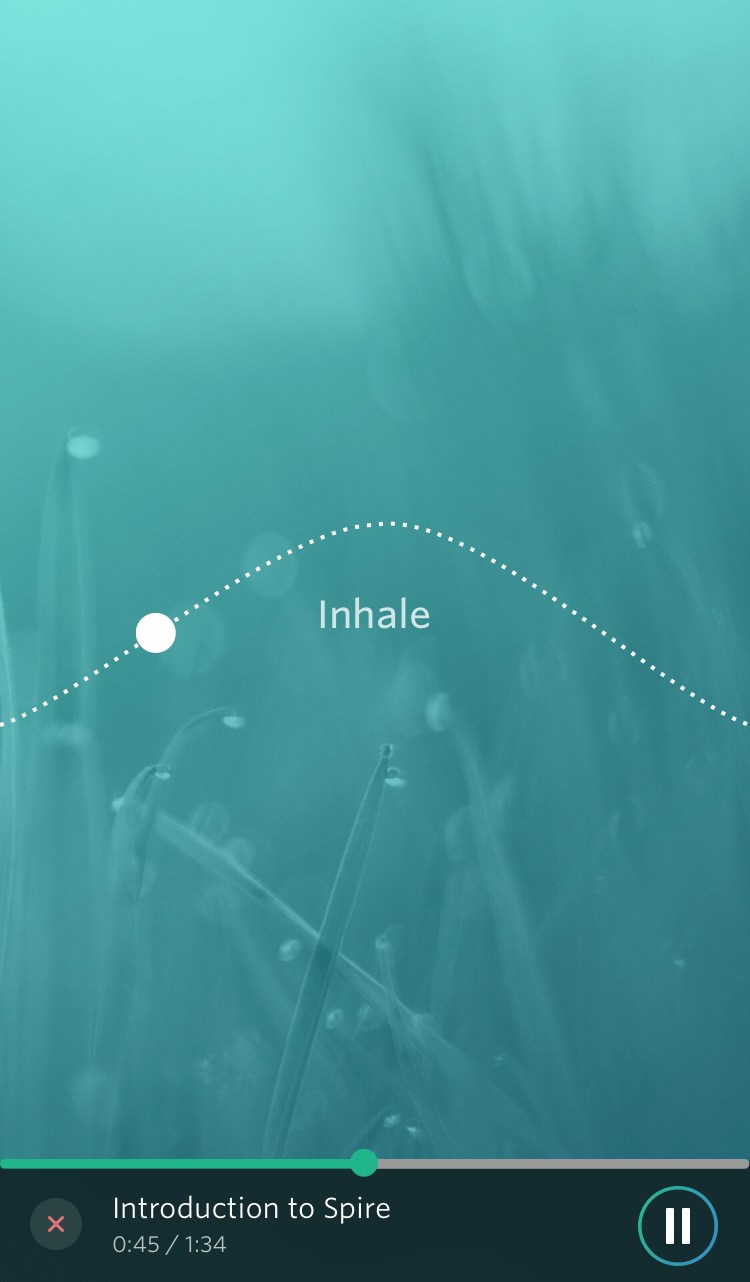 The app calculated my average breath rate (in breaths per minute, or BPM) based on my height and weight to set my baseline of 15.3 BPM.  Spire primarily breaks breathing patterns into streaks of calm, focus and tension, and each one is based around your average. My slower, deeper breaths spelled calm, while any rapid, shallow ones would be indicative of stress. 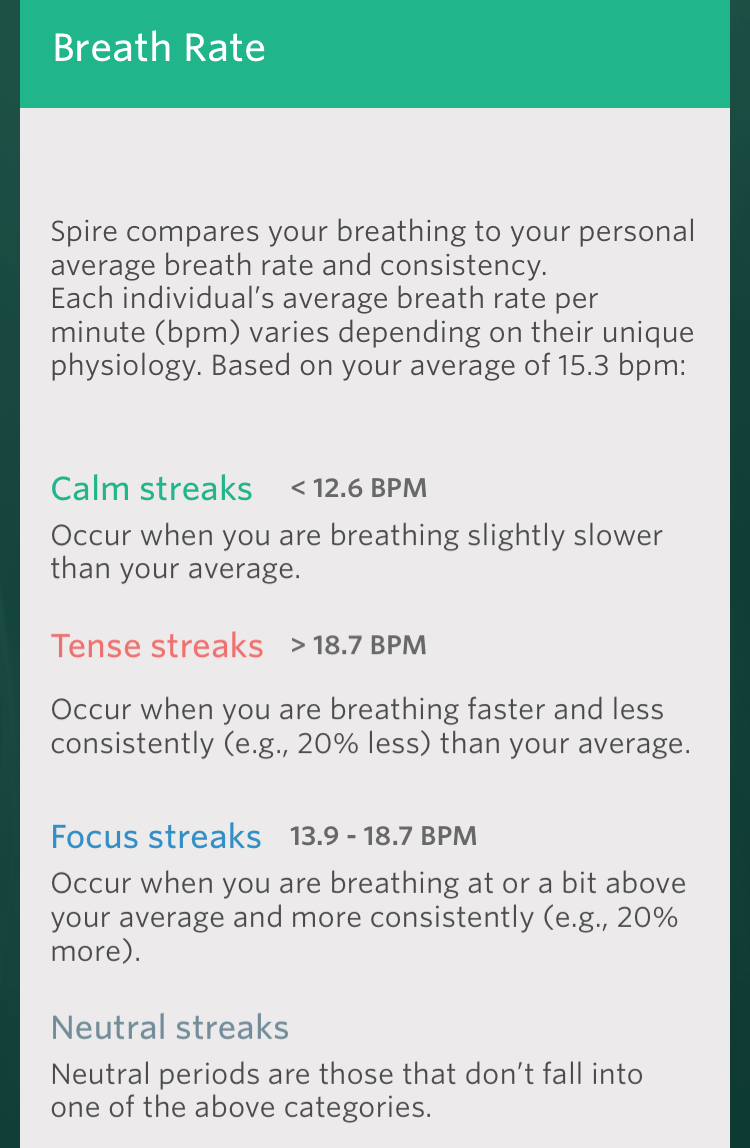 Every so often, I'd go about my business during the day, and feel the Spire Stone buzz against my skin to let me know there's been some kind of change in my breathing. Every time, I'd look at my phone notifications to see what was up. While the vibrations from the Spire Stone are different for each thing they indicate, I haven't done a great job at actually being able to tell them apart.

Most of the time, the buzzing was to tell me I'd just had a streak of calm or focus. While it was fun to be notified of these stats at first, they eventually became very frequent, so I went into the settings to only have the app notify me when they lasted 10 minutes or more.

Other times, the pulsing would be indicative of tension. When this happened, I tried my best to stop what I was doing and take some super deep breaths, just like the app showed me. It wasn't hard to get my BPM down to a reasonable rate, but when I was in the middle of a task, it would often go back up to the tense level when I resumed. 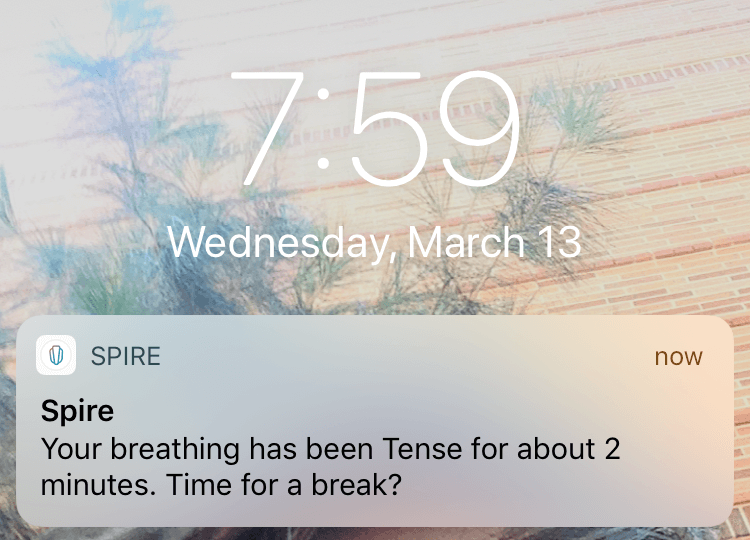 After my first day of wearing the Spire Stone on my jeans, I found that it was making me uncomfortable because of the way it rubbed against my skin. I took it off for the night (you don't wear the Spire Stone to sleep) and when I put it on the following day, I clipped it invisibly into my bra. Since then, I've had no further issues with discomfort. In fact, I completely forget that it's there. 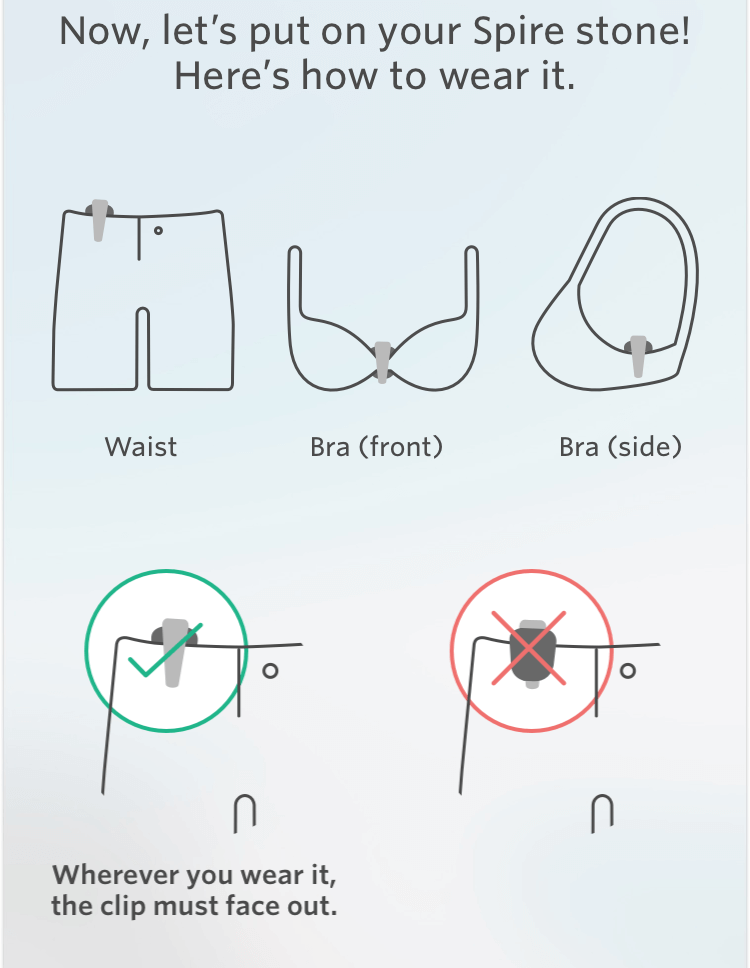 That's good and bad. On one hand, it's great when a wearable device isn't itchy, irritating or distracting, but on the other hand, that comfort can make it all too easy to forget that you're wearing it at all. That's only an issue because the Spire Stone can only hold six hours-worth of data when the app isn't turned on, and when I forget about the Stone, I forget to check in on it with the app. There are some massive holes in my Spire data (some larger than 24 hours) simply because I wasn't always on top of things and I try to close apps when I'm not using them.

Still, you shouldn't worry too much about accidentally leaving the Spire Stone attached to your clothes. According to their website, the stone can survive a tumble through the laundry. If I'm ever careless enough to throw it into the laundry, I'll be grateful that they thought ahead.

It seems they had forgetful people like me in mind when they designed the battery as well. I expected to have to charge the Spire Stone every few days, but found that it can hold a charge for up to a week and a half. And since you don't wear it overnight, that gives me the perfect opportunity to charge it up in my sleep when it's running low.

Over the next weeks, I was surprised to see that my results were all over the place. While some of my days were dominated by calm streaks (on one day I had 4.3 hours of calm), on other days I was more focused, and on others I had extended periods of tension. Most of the time, I was tense when I was watching something exciting on TV or wrapped up in a difficult assignment and didn't particularly feel like stopping everything to practice my deep breathing.

Over the weekend, I saw Captain Marvel at the movies, and from the looks of it, the excitement of the movie made me pretty tense. Though I felt the Spire stone buzz a few times in the middle of the film, I was too caught up in things to take my attention away from Carol Danvers in order to do breathing exercises. 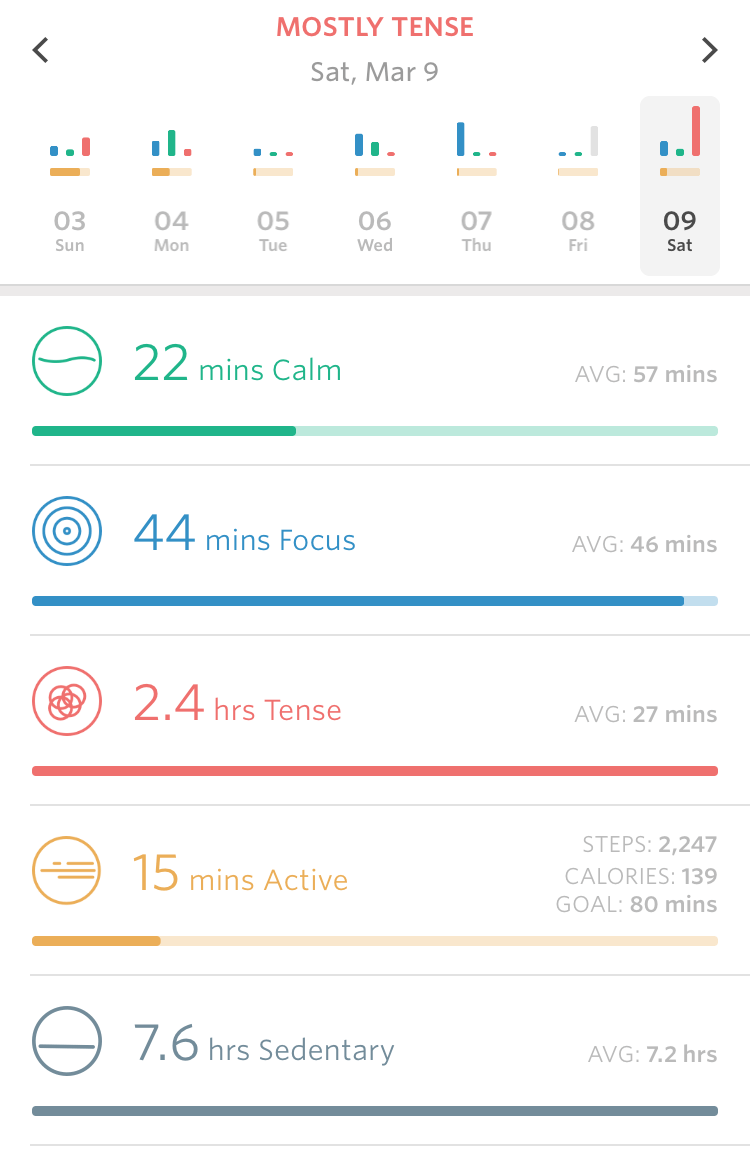 But when I was in the mood to get my breathing on, the Spire app had some incredible options for me. It comes with small lessons called Boosts which not only discuss the importance of calmness and breathing, but also work like guided meditations to get you in exactly the right mindset to slow down your mind and make the stress melt away.

There is a lot of great content here, including some lessons broken into multiple sessions, that all feature comfortable, slow voices that will help to put you in a calm, zen-like state. Sometimes all you need is a reminder to practice better posture, breathe deeply and think of the things you care about to immediately put you in a better place. 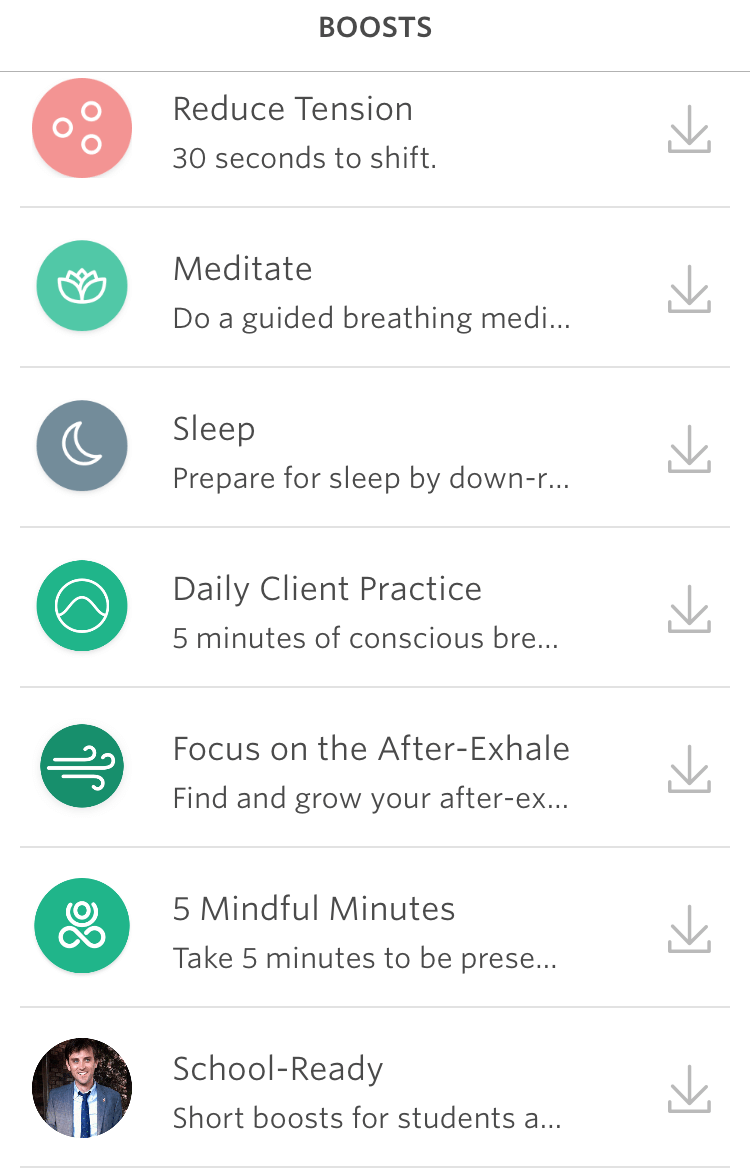 And if you want to slow your breathing but don't have time for a full exercise, or just don't have your headphones on you, the app also has a visual breathing tool built in. It consists of a screen of grey dots, which slowly turn green as you slow down your breathing. The dots swirl, coming in and out with your breath, until you've gotten your breathing into a calm place. I loved using this method in particular because of how simple it was, and because I could do it in public without getting any weird looks. 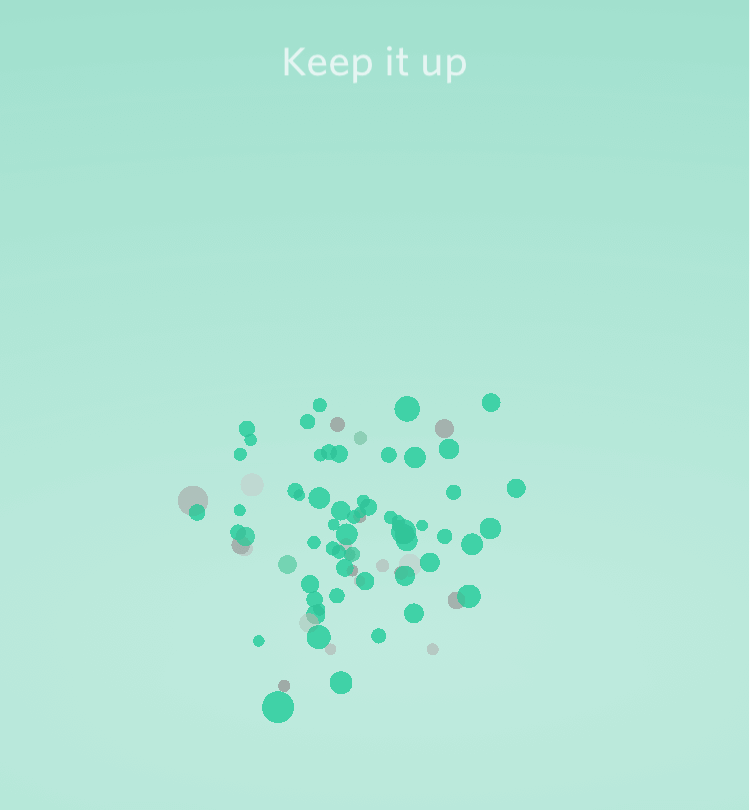 Spire Stone also tracks your activity levels and encourages you to get up and do something if you haven't been active in the last hour. I'm a little embarrassed to admit that this has not been a very active month for me at all—but at least the measly yellow bar I see next to each date in the app a daily reminder that I really should get out more. Eventually, it might shame me into doing some good for my body.

Overall, I find that the more I engage with my Spire Stone and listen to what it's telling me, the better I feel, and those feelings improve even further when I sit down and listen to the Boosts to get even more out of the stone. It's helped me to recognize when I feel that something is off, even if it doesn't register on the stone, and to take measures to get back on the right track. With or without the stone, I think that's a lesson that'll serve me well in the future.

At $79.99, the Spire Stone won't suit everyone's budget, but I think it can be an incredible tool for anyone who needs a better understanding of when and how they get stressed, and how to deal with it. However, it's important that you work with the stone and let it guide you in order to get its full benefit. If you anticipate you're going to get lazy and ignore its feedback, it's probably best that you just pass on it entirely, because it won't be able to help you much if you aren't willing to put the work in, too.

As much as I love wearable devices, it's almost inevitable that I eventually give up on them, because all of the charging and syncing with the app they require means I only get useful data from them about half of the time. With Spire Stone, I feel like I finally might be able to break that cycle.

If you're serious about wearable technology, click HERE for my review on the stylish Ōura smart ring.