Meet Candace Nelson, the founder and pastry chef of Sprinkles Cupcakes—you know, one of the the world's first-ever cupcake bakeries. 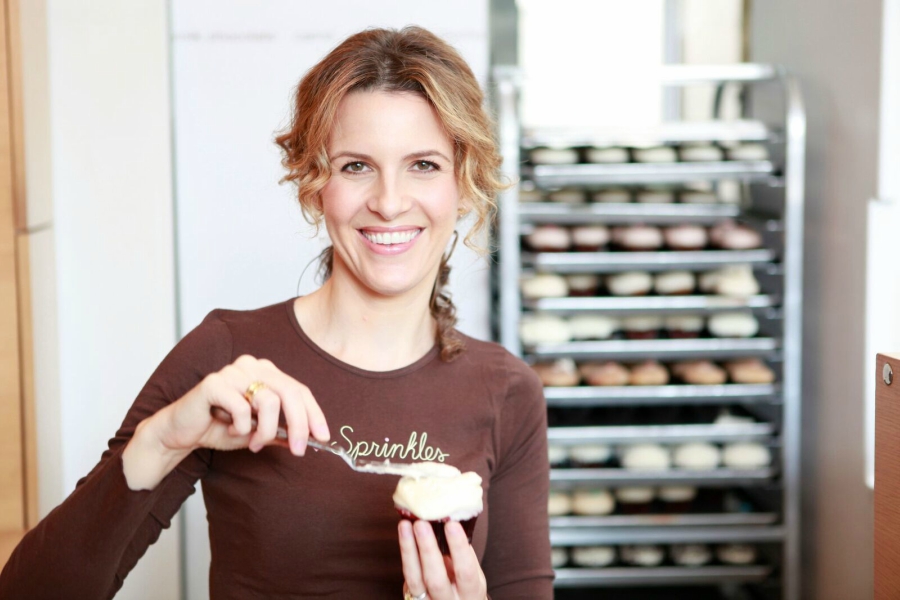 Candace's cupcake journey began in 2005 when she took her dream of owning a bakery and transformed it into a reality by opening up her specialty store in the heart of Beverly Hills.

Eleven years later, Sprinkles Cupcakes has 21 locations and several more are in the pipeline. Pretty magnificent.

What inspired Candace to create her own business? How do the flavors for these sweet confections come into existence and what's next for this cupcake-baking empire?

We spoke to Candace herself to find the answers to these questions and get the inside scoop on what it's like spearheading such a sweet and successful food chain.

Scroll below and prepare to feel inspired!

Sweety High: What age did you first start experimenting in the kitchen?

Candace Nelson: I started baking with my mom probably when I was five or six. Really simple things at first like chocolate chip cookies and brownies—things that clearly I liked to eat and that were easy enough to mix up by hand.

As I got a little older and more experienced, we progressed into things like meringues, angel food cakes and roll-and-cut sugar cookies for the holidays.

SH: What age did you know you wanted to be a pastry chef? Was it pretty young?

CN: No, it was very old, actually! Initially, I didn't think about it being a career. I thought of it more as a fun way to relax.

It wasn't until I had my first couple of jobs in the real world that I thought, "Oh boy, I'd really love to do something that is more simple and something with my hands—something that brings people joy!"

I previously worked in investment banking for an internet company during the dot com boom of the late '90s, and then the dot com bust. In San Francisco there were basically no jobs anymore because all these companies went out of business overnight.

So, all my friends were going to business school and everyone began asking me, "Oh, are you going to apply to business school, too?" And I said to them, "No, actually I'm applying to pastry school!" I just thought that sounded like a lot more fun and I really wanted to change up my life and do something more fulfilling and rewarding.

I still didn't know if it would be something that could pay the bills, but I knew that I wanted to give it a try.

Variety is the spice of life… try a new flavor! Which flavor have you yet to try? Tag a friend and make it a Sprinkles date! #SprinklesFlavorite #Cupcakes

SH: How did you decide you wanted to open a bakery that specialized in just cupcakes?

CN: I started my journey really more as a special occasion cake-maker. When I was growing up, cupcakes were pretty pedestrian. You'd get them at the supermarket, they'd have the plastic pick in them and they had these sort of garishly colored sprinkles.

When I started making special occasion cakes, I would spend several days making these fondant and gun cake decorations, cooking the buttercream and doing the fillings and the layers.

It was really time-consuming and exhausting work, and what I realized was that special occasion cakes don't get ordered that often and by the time you are done with them they're not really that fresh anymore.

So, I thought about the fact that cupcakes could really fit my needs in terms of being something that could be freshly baked and then elevated with great ingredients and an artful design. It was sort of this marriage of the special occasion cake with the lowly cupcake that equaled the new, more sophisticated cupcake.

And that's when I started getting really excited because I was recreating something that everybody already loved, but didn't really think about as an elegant dessert.

Find your new #SprinklesFlavorite with our weekly flavor additions: #theSprinkle, Salty Caramel and Banana Peanut Butter! Enjoy a BOGO today when you whisper "my flavorite!"

SH: Did people think you were crazy for going after this new endeavor?

We literally had potential landlords hang up on us. It was really, really hard opening up our first store.

In 2003, when @sprinklescandace and Charles were searching for the perfect space in #LosAngeles to launch their business, dozens of landlords hung up on them after hearing "we're opening a cupcake shop." A cupcake shop had never existed and landlords were skeptical of this concept which had never been tested. When #SprinklesCupcakes finally opened the world's first cupcake bakery on April 13, 2005, it sold out within a few a couple hours. Copycats followed suit quickly and the Sprinkles model, design aesthetic and branding was replicated across the globe within months. Today, the "cupcake only" store concept is considered a viable business model! We want to hear if YOUR dream is to open up a cupcake bakery!

SH: But you sold out all your cupcakes on your first day, correct?

CN:  We did! It really was an instant success. Thinking back on it, we were so fortunate.

I had been working out of my home for a little while, so there definitely was a little bit of buzz building. And then Daily Candy—which was a very successful E-newsletter at the time that would tell all the tastemakers in L.A. what was new—released something on our opening morning and basically got the buzz started.

Eight months later Oprah Winfrey had us on her show. We had a really good moment right off the bat.

Smiles are free. Everyone gets one. Our focus is not only to brighten your taste buds but also your spirit. Come in today and share in the fun by whispering 'Smiles are free' for a free cupcake with your initial purchase.

SH: Where did you come up with the idea to have a cupcake ATM?

CN: It came about very organically. I was pregnant with my second child, and I swear both of my kids were in the womb raised on Sprinkles Cupcakes because I would have a daily habit of eating one and a half dark chocolate cupcakes a day.

There was one night I was having this particular craving, and I was having kind of a fit. I was pregnant, grouchy and hungry and I needed chocolate. I was complaining to my husband saying, "I can't believe it, I own a cupcake shop, and even I can't get a cupcake at 11 o'clock at night!"

So, we got to laughing and thought "Well, yeah, wouldn't it be great if we had this cupcake ATM and we could go any time of day? Isn't that a crazy, funny idea?" And then we kind of looked at each other and said, "Well what if we really did do that?"

And so we took this crazy "what if?" and turned it into a reality. We thought it would be fun and a really great way to get some new press and media, but we never thought it would really drive business. And it really does!

SH: How do you come up with the extravagant cupcake flavors that Sprinkles offers?

CN: You know, I used to selfishly say that I developed the cupcake flavors based on what I was dreaming of eating—basically to satisfy my own urges. But, obviously, once you become a retail business it becomes even more important to have that communication back and forth with your customers.

It's like, "Listen, here are the flavors I love, but what are we missing, what would you guys like to see?"

For example, I never thought that I would do a vegan or gluten-free Red Velvet, that just wouldn't be something that I would be craving, or needed to eat. But we listened to our customers and came out with those offerings.

I keep tabs on what people are eating, what the food trends are and how we can be representing those food trends in a way that's true and authentic to Sprinkles.

SH: So, we heard there's a new Sprinkles Baking Book set to be released on Oct. 25, can give us any hints about what is inside?

There are some new cupcake recipes in there, some old Sprinkles favorites that haven't been released before and then there's also just some great pies, bars, loaves, tarts, candies, caramels and other great delicious treats that I like to bake with my family with my friends.

They're sort of all-American classic desserts, but made in a modern and fresh way. It's been a lot of fun and a lot of hard work!

Set your timers! The #SprinklesBakingBook comes out on October 25! Can't wait? Pre-order your copy at sprinkles.com/order and receive a $10 gift card plus a secret recipe download instantaneously!

Feeling inspired by Candace and her ability to transform her dreams into reality? Us, too! Make sure to pre-order The Sprinkles Baking Book HERE and and you'll receive a $10 Sprinkles gift card. Get in the kitchen and get baking, girls!

If you need some starter recipes to get you going in your cupcake-baking endeavors, may we suggest THESE totally spooktacular Halloween cupcakes?