When SteamWorld Dig 2 came out on the Nintendo Switch, I loved it so much that I played it three times through, back to back.

Like the wonderful first SteamWorld Dig game, it was a Metroidvania encouraging players to mine for treasure, exchange that treasure for money, and then buy gear that'd help mine even more treasure. I was obsessed, so when I heard that Image & From Games' next SteamWorld title would be card-based RPG, I was curious but wary. Would the developer be able to recapture that magic again in an entirely new genre?

I was able to receive a download key for the upcoming SteamWorld Quest: Hand of Gilgamech on the Nintendo Switch, and I'm happy to report the game is a delightful surprise.

The SteamWorld games take place in a timeline populated not by people, but by steam-powered robots. While these titles usually transpire in desolate western wastelands, SteamWorld Quest deviates from the others, taking its steampunk aesthetic to medieval times. The entire game unfolds as a fairytale told to a young Steambot before bed, allowing the game to look luscious and whimsical, where the other game would be dreary. 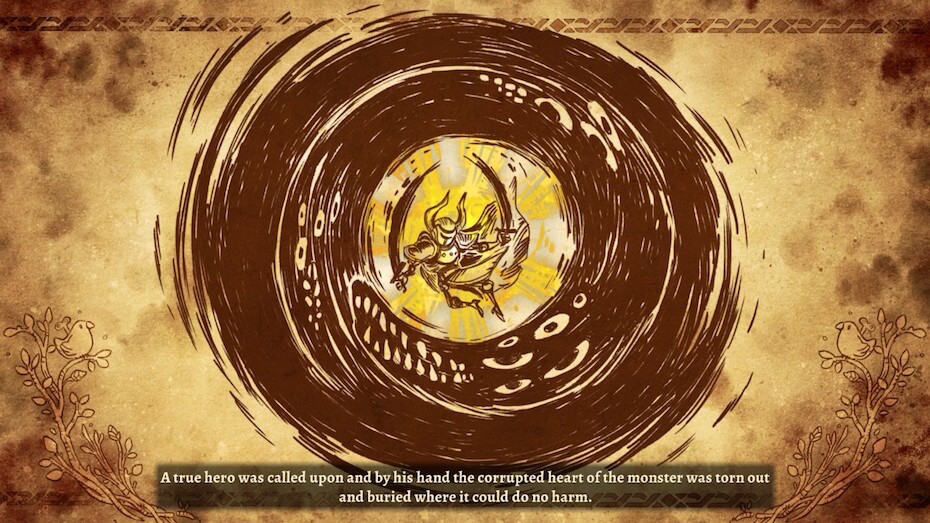 This tale begins with Armilly, a sword-wielding aspiring hero, and her mage friend, Copernica. All Armilly wants to do is to join a local guild of heroes who want nothing to do with her. But when a much larger threat presents itself, she's more than ready to put her life on the line, with the support of the friends she makes along the way, to stop it. 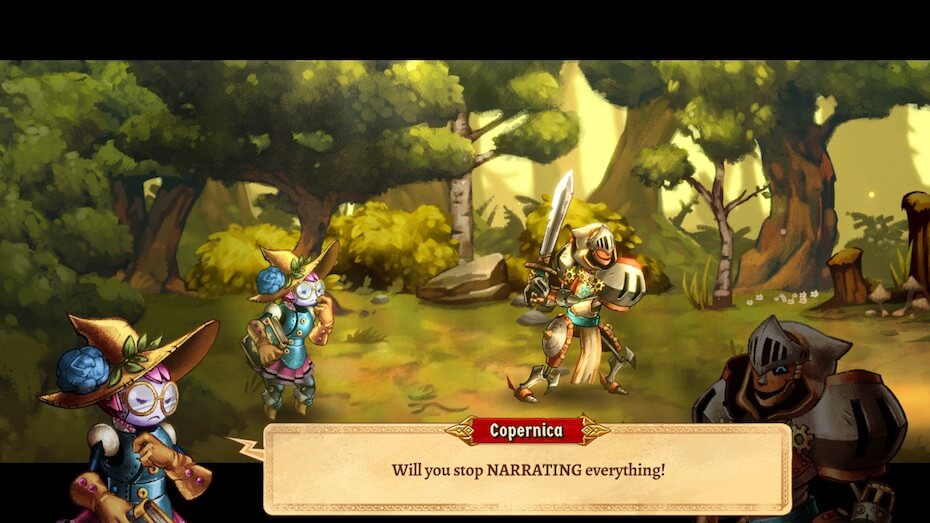 While the game might seem like a pretty straightforward RPG at first, it adds a unique complexity by incorporating deck-building to create each character's moveset. Each one has eight cards in their deck at any time, which you can swap in and out as you discover more cards through achievements, in treasure chests or by purchasing them from a wandering merchant. 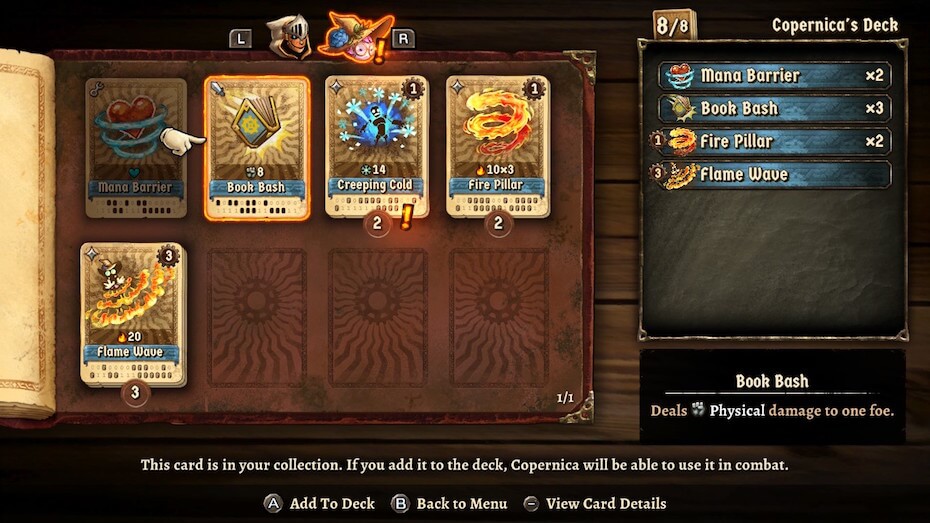 During battle, you'll randomly draw six cards from your current heroes' decks. You can select up to three cards each turn to decide which course of action you'll take, and throw out two cards in your current hand for a chance at two more cards that may be more beneficial. Maybe you want to use Armilly's sword attack before casting a protective spell with Copernica and then having her hurl fireballs at the enemy. At the beginning of every turn, you draw again from what remains of the combined decks to hold six cards again. When the deck is empty, the cards are reshuffled for you and the process starts again. 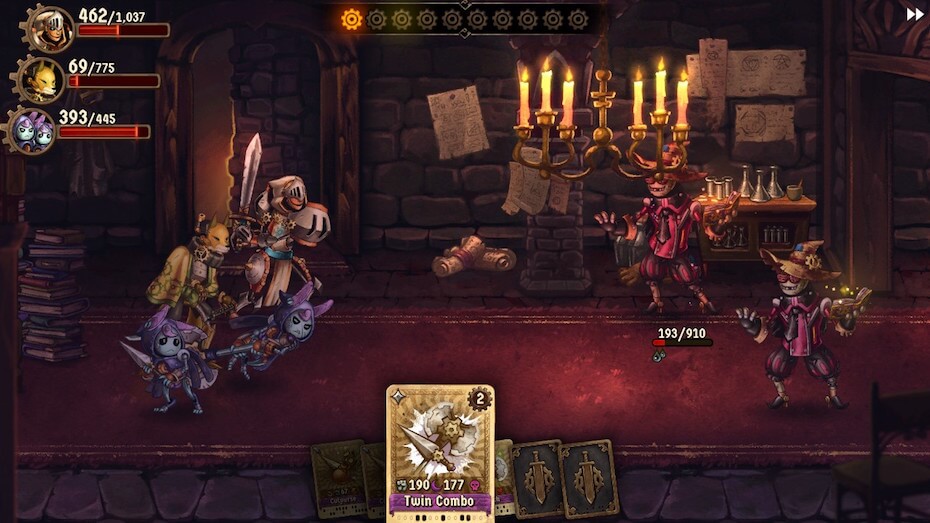 Of course, you'll want to build your deck wisely. The more powerful attacks and spells require Steam Points, or SP, which you build up by using standard moves in battle. While it might be tempting to fill your deck with mighty three-SP cards, they'll be useless to you unless you can gather enough SP to utilize them. Also, if one of your heroes faints during the battle, their unusable cards will clog up your hand until they're revived.

And then there are combos. By using three moves from one character in a single turn, you get the added bonus of a fourth move from them, from protective spells that cover the entire team to powerful flurry attacks. Different equippable weapons will also change heroes' combo moves. Perhaps too often, my strategy relied on using combos as often as possible to get in that coveted fourth move every turn.

It's not too long into the journey that the two heroes also befriend the lovable tinkerer Galleo, who's as good at healing as he is dealing (and taking) damage. Later, the mysterious mask-wearing samurai Orik and twins Tarah and Thayne also join the team, truly freeing up the player to customize the decks and perfectly suit their playstyle. Thanks to the merchant's upgrade system, you can also use items you gain in battle to upgrade the cards you use most often. 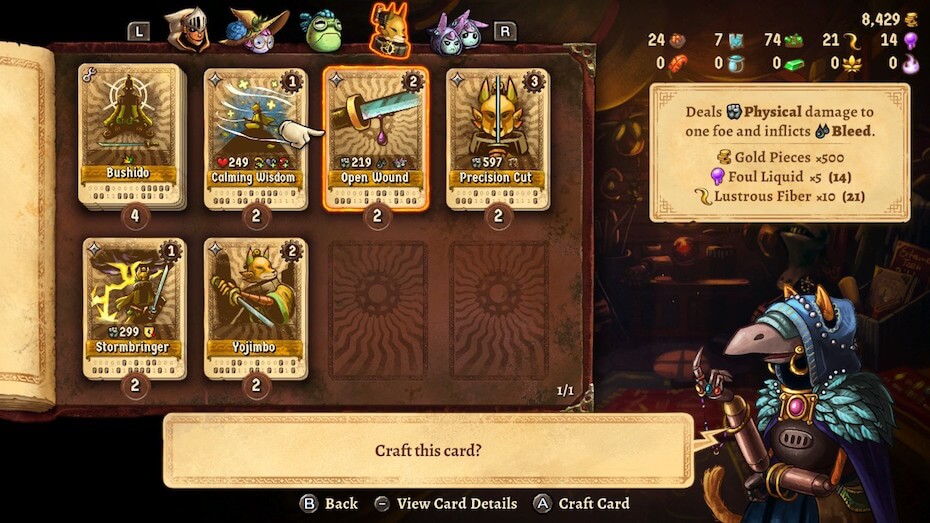 Once you meet Galleo, it's likely you'll want to place the maximum of three heroes in your party at once for the best chance to survive. However, it's also a completely legitimate strategy to whittle your team down to two characters in order to ensure frequent combos. Love one character above the others? You can use only them to blast through opponents, if you're tough enough, guaranteeing you a combo every turn (as long as you have the SP available).

You can't just blindly throw your best attacks at enemies, either. You'll find that while certain foes are weak to some elements, they have a resistance to others. Some baddies can become completely immune to physical attacks, while others might actually gain health if you strike them with lightning magic. Paying attention to what works and what doesn't can be the deciding factor between victory and defeat. That goes the other way, too. At one point, I was faced with a horde of tough, venomous enemies, and Galleo's poison immunity is the only thing that saved my butt.

The game's medieval backdrop will take players through connected areas of forests, sewers and castles littered with breakable items that'll reward you with coins and treasure chests filled with equippable items, gold or new cards for your deck. They're also crawling with enemies. One touch, and you'll enter battle with them—though you can strike them, first, to start the battle with a slight HP advantage. If there's a lackey that's giving you trouble for whatever reason, you can always skirt around them if you're sneaky enough. It's usually a good idea to fight everyone for the sake of gaining experience and becoming stronger, but skipping a couple here and there doesn't hurt too much.

The turned-based battle system can take a moment, but thankfully pressing ZR speeds everything up. The game is also super accessible and doesn't require any real-time strategy or dexterity to win (unless you count dodging enemies or getting that first hit in on them in the overworld). As the game progresses, battles become less simple, evolving into drawn-out fights for survival.

Whenever I died (which was often) I was sent back to the last checkpoint with all of my collectibles and experience intact. If I'd wanted to, I could've backtracked a little bit and spent time defeating nearby enemies to build up my experience and make my heroes stronger, but I always felt more compelled to move forward and try out new things, instead. Not being punished in any real way meant I was willing to test new cards or rearrange my team until I found something that did work, and it was always satisfying to discover that a smart approach could get me through a previously difficult situation. 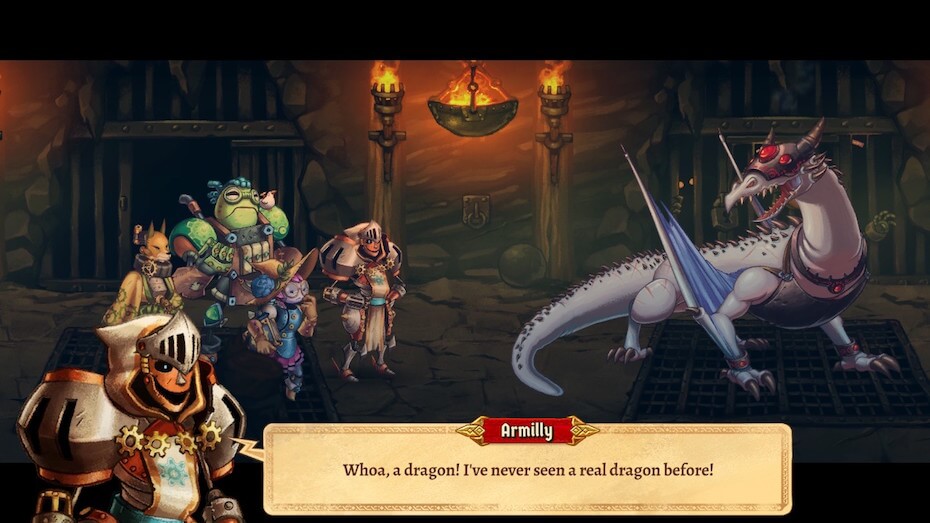 The epic final boss in particular will require endurance, planning ahead and likely lots of healing on the part of the player, so when you finally bring it down, it feels like a major achievement.

SteamWorld Quest may not have the deepest story, but it has well-written and likable characters, and a heartfelt ending that really made me connect with its heroes. I liked that the game made me try new things and really get to know the ins and outs of every character in battle because it made me want to see them succeed. They're also wonderfully designed and completely unique from each other. Even the two twin characters are distinctive individuals. 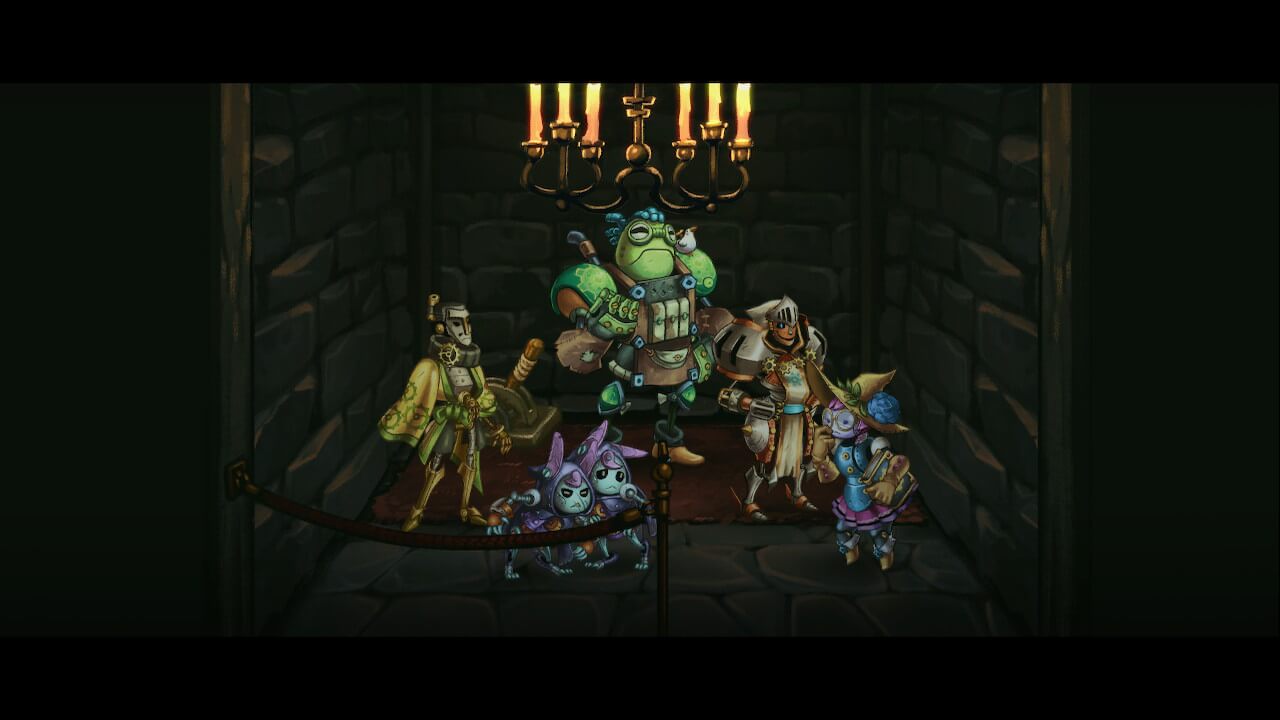 While the enemy designs don't stand out nearly as much, there are still some surprises here and there that keep them from feeling stale too quickly. The backgrounds are elegantly designed, breathing life into the world that's lacking in other SteamWorld games because of their western dessert settings. The music is also memorable and appropriately heroic during the game's most powerful moments, and I never found that it got repetitive or dull over the 12 hours or so I spent completing the game. Even though my adventure is over and the final boss has been vanquished, I fully intend to go back and nab all those treasure chests I'm still missing.

Curious about the world of steam? Click HERE to find out why I find SteamWorld Dig 2 so magical.