If Science Is Your Favorite Subject, You Have to Subscribe to StemBox

For all you girls who enjoy everything science, math and tech, you need to know about StemBox!

It's a monthly subscription that delivers a box filled with a new and exciting experiments to work on, plus a couple of extra fun goodies.

If you're intrigued by all StemBox has to offer, keep scrolling for the rundown of my experience with the subscription box below.

How Does It Work?

As I mentioned, each month's box contains a unique hands-on experiment, along with fascinating tidbits about the box's subject matter. The boxes also contain goggles and gloves, because safety first!

While you only receive one box a month, I was lucky enough to get my hands on two boxes from previous months. They were the Bacteria Box and the Blood Box. 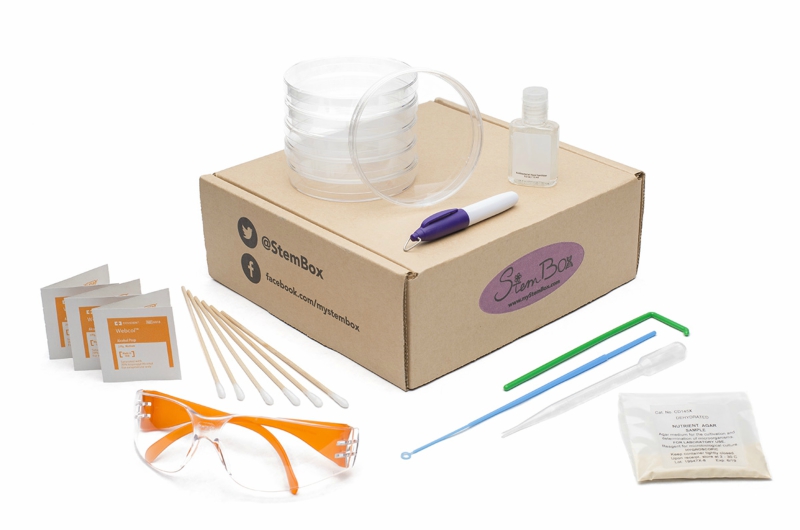 This box's experiment was all about growing bacteria. After I read up on the subject matter on the handy-dandy pamphlet inside the box, it was time for me to collect some samples.

The first step in this experiment was preparing agar plates. Thankfully the nutrient agar was included in this box, so all I need to prepare the mix was a bit of water. After making the mixture and pouring it equally into six different petri dishes, I let it sit for an hour to solidify. 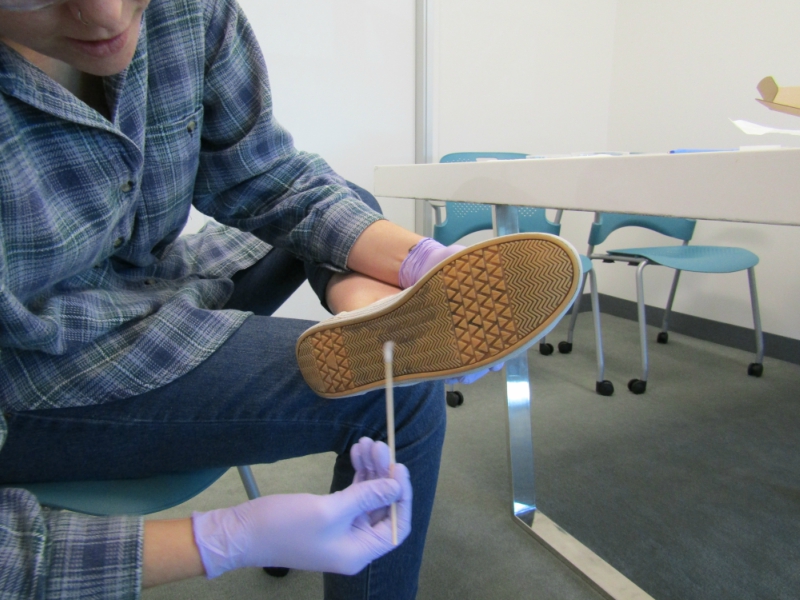 (Swabbing the bottom of my shoe like it's nobody's business)

And after I let the bacteria grow for 48 hours, the results were somewhat disgusting. The bottom of my shoe (pic on the left) and our office's kitchen sink faucet (pic on the right) definitely had the best (er, worst?) looking bacteria. 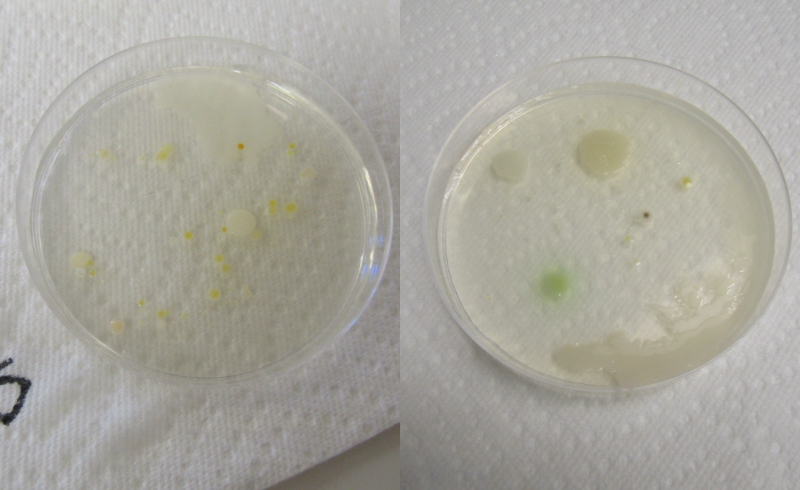 All in all, I really enjoyed doing this experiment. It wasn't too difficult to do and I learned a lot about the types of bacteria growing all around me. I for sure feel like I need to live in a plastic bubble though. 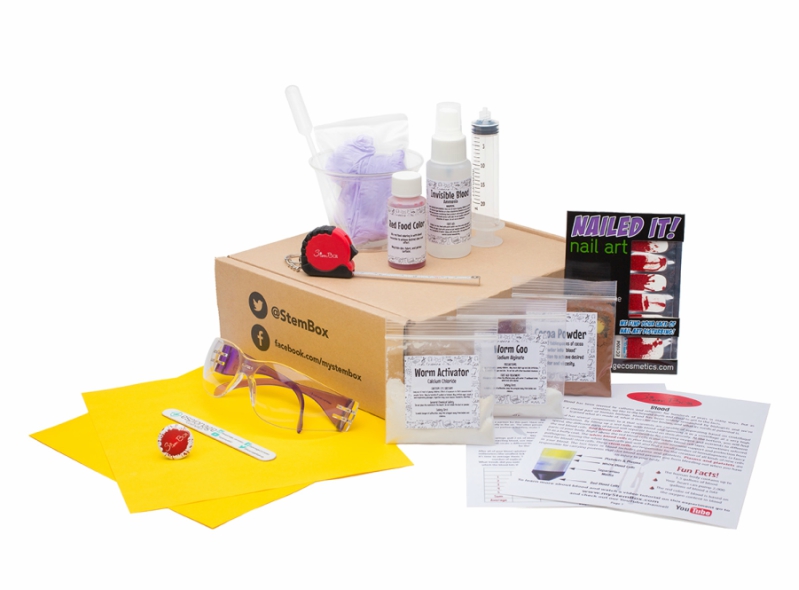 Next up was the Blood Box. I was stoked to get my hands on this bad boy, because I find blood incredibly fascinating.

The best part about this box was that it contained a few different blood-themed experiments.

Up first was the invisible blood experiment. After putting on my safety goggles and gloves, I added water to the bottle of ammonia provided in the box. Then I generously sprayed one of my hands with the mixture and slapped it down on a piece of goldenrod paper. Because of the low pH in the ammonia and the chemical in the goldenrod paper, a bloodstain of sorts was produced. It definitely took me by surprise!

(Can you guess which one is real blood? JK, they're both fake! Or are they…?)

Thrilled by the outcome of the first experiment, I quickly moved on to experiments two and three in the box.

For the second experiment, I concocted some scarily realistic looking fake blood. It definitely freaked some people out seeing what looked to be blood in a blender.

I then used the blood I made for the third experiment, which was analyzing forensic blood splatter. Participating in this one made me feel like a crime scene investigator, so I was all for it. 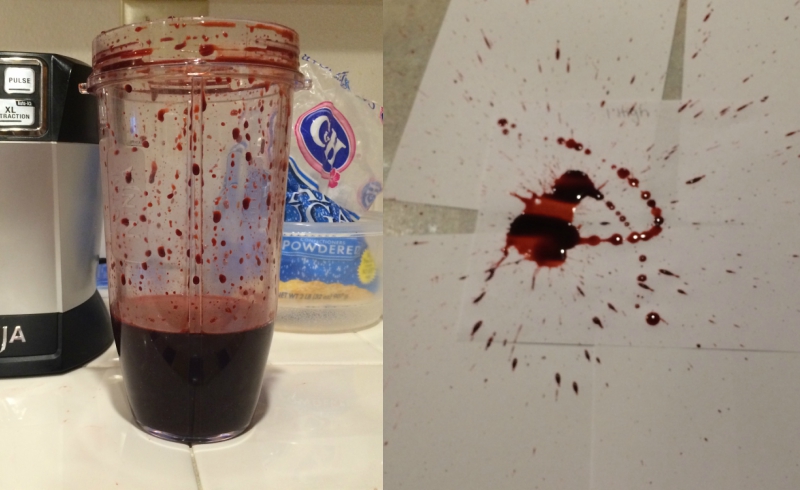 There was one other experiment in this box, but unfortunately I didn't find the time to complete it. I did, however, watch the YouTube tutorial for it and it looked freaking awesome. Just because I haven't done it yet, doesn't mean I won't get around to doing it soon!

Would I Recommend It?

It's a definite yes from me! I'm certainly no science wiz, but I did have one heck of a time partaking in each box's experiments.

If you're someone who's really into this type of stuff, it's a no-brainer that you sign up for your subscription ASAP.

Even if you're not that into science or math, you'll still enjoy StemBox. It's a fun way to get an in-depth look on certain subject matters that you may never get a chance to in school.

So go ahead and get your STEM on by signing up for your subscription HERE!

Speaking of StemBox, get to know the founder of the subscription box, Kina McAllister, HERE.