A Definitive Ranking of the Playable Characters in Stranger Things 3: The Game

BonusXP's Stranger Things 3: The Game dropped on the same day as the third season of the show, serving as an awesome expansion of, and companion to, the series.

Nearly a month after the company provided us with a review code for the game on the Nintendo Switch, we're still having a ton of fun with the 16-bit recreation of Hawkins. The game features 12 of the series' most beloved personalities as playable characters—each with their own unique strengths and abilities—though not all characters are equal. 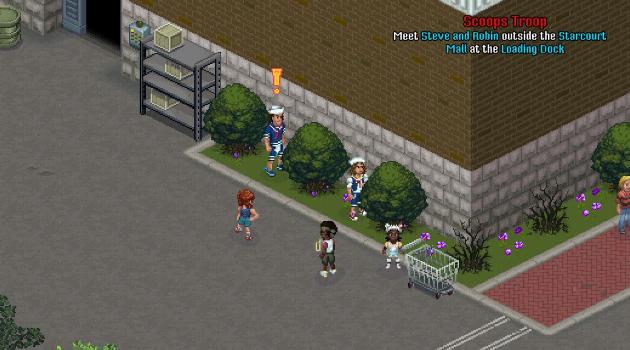 In fact, you might be surprised to see that some of the show's toughest brawlers are only so-so fighters in the game, and that unexpected characters become wonderfully overpowered. That's why we've ranked each of the playable characters, based on their strength, from worst to best.

Poor Jonathan didn't have much to do in the third season of Stranger Things, and we don't get much use out of him in this game, either. While his punch attack does decent damage, it forces him to get up close and personal with enemies to use it. His ability, Group Photo, temporarily stuns a group of enemies with a camera flash and deals a little damage across multiple enemies. This comes handy in a pinch, but we typically prefer to use more offensive attacks.

Joyce may be the toughest mom in all of Hawkins, but as far as the game goes, she's far from top-tier. While her heavy bolt cutters are absolutely necessary for progression in the story, the hefty physical attack is all she has going for her. Her Whirl ability may have her whirling impressively around with the bolt cutters, but the damage it does compared to that of other characters' specials is paltry.

Erica is the last character to join you on your quest in Stranger Things 3: The Game, so we wish she showed more of her onscreen sass and toughness in her fighting ability. Her Zap attack with a stun gun is among the weakest in the game, and even the fact that it can stun enemies in their tracks doesn't boost her higher on the list. Her special is Chain Zap, which basically hits a bunch of onscreen enemies with her regular attack at once. While it's useful, we think she could do even better.

Mike is a relative heavy-hitter, considering he's one of the two starting characters. While his Bat Swing move can deal plenty of damage, his Taunt special ability can be a little underwhelming. It makes all of the enemies on screen focus their attacks on him, rather than his teammate, and briefly makes them take a tiny bit more damage. It's an interesting ability in theory, but it's never been one of our go-tos.

When you think of Chief Hopper, you probably envision someone who could beat up almost anyone who picked a fight with him. That's why it's a little strange that his punches don't deal any more damage than Mike does. While his Rush ability is only a little stronger than his Punch, it can hit more than one enemy at once if they're lined up properly, and does extra damage if they're stunned. He's formidable, but there are definitely stronger heroes ahead.

Base Attack: 15 (with chemical damage)

Dustin's abilities may not seem all that special on the surface, but the fact that they deal chemical damage makes him a valuable ally. His attack is called Poison Spray (which we know full well is actually Farrah Fawcett hairspray) and can be sprayed at a distance, covering a relatively wide range. Though it doesn't immediately cause a lot of damage, the residual chemical effect causes extremely useful additional hits. He also has a Robot Bomb attack that causes a big damage blast and deals chem damage, slowly sapping away enemy HP.

Lucas is another of the game's starting characters, but he remains invaluable throughout the course of the game. His Wrist-Rocket weapon gives him one of the longest attack ranges in the game, so he doesn't even have to get near enemies to take them out. Even though it's one of the weaker attacks in terms of hit points, it can be used in rapid succession from a distance. His Cherry Bomb shot is also a long-distance attack that can hit multiple enemies in one area, and it's one of the strongest abilities in the game. Plus, it's a fire attack, so it's extra powerful against enemies from the Upside Down, who hate the heat.

Were you expecting El to top this list? So did we, but her in-game abilities barely push her into the top half. Her stunning Psychic Push attack can deal wide damage from a distance, but it can be a little tricky to aim and anticipate if it will actually hit an enemy. Her Nuke ability requires twice as much energy as the special of any other character, which should make it by far the most powerful. While it can hit a range of enemies, sometimes stunning them or even hitting more than once, it's not one of the game's hardest-hitting moves. We think she could probably do better.

At first glance, Nancy might not seem all that impressive. Her Scissor Slash is fast, but it's among the weakest attacks in the game. Then, you realize that if she stabs an enemy in the back with them, the Critical Hit does three times the damage, and that her Execute ability is a whopping 20 times stronger, making it capable of taking down everyone but bosses in a single hit. Just like in the show, Nancy is mighty.

We knew Max was tough as nails, but we didn't realize her Kick attack would be the strongest close-quarters attack in the game. She's also quick, and her Medic ability is the only one in the game that can heal your team, dropping five restoring hearts each time it's used. Her strength and tenderness can go a long way, particularly once you've run out of First Aid Kits.

Steve becomes more and more crucial to the Stranger Things mythos with every passing season, and he's a V.I.P. in the game. Dressed in his iconic Scoops Ahoy outfit, his Scoop attack hurls balls of ice cream at the bad guys. Not only is this the most powerful projectile weapon in the game, but the coldness of the ice cream also makes enemies move at a snail's pace. His Corrode special is equally remarkable, causing enormous damage on impact, and then leeching additional HP with its chemical component. He's kind of a big deal.

Base Attack: 15 (multiplied, with fire damage)

Will has put up with a lot over the course of Stranger Things, so it's great to finally see him so empowered in this game. Each burst of his Roman Blast firework attack may not be that strong on its own, but a single button press sends out three of them at once. When these are stacked, he becomes the stronger character in the game by far. Plus, his spinning Death Blossom ability sends a flurry of fireworks in a circle around him. And did we mention that every one of his fiery attacks is super effective against Flayed enemies? There's also an equippable item called Firestarter, which is one of the easiest items to craft and boosts your fire damage further. Create a couple of those, and you make Will virtually unstoppable.

Stranger Things 3: The Game is available now on PlayStation 4, Nintendo Switch, Xbox One, Android, iOS, Windows and Mac for $19.99.

If you can't get enough of Hawkins, click HERE to find out which Stranger Things quote should be your motto, based on your zodiac sign.