Super Crush KO May Look Simple, But It's an Elegant Brawler With a Ton of Heart

I've been eagerly awaiting the release of Super Crush KO ever since I first got to try a few stages of the game at E3 last year—and now that it's officially out, I've got to say the wait was completely worth it.

It's a fast and frenetic brawler with a vibrant color palette, full of killer robots and a ton of heart, making it well worth its $15 price tag. The team behind the game generously provided me with a review key on Nintendo Switch, and here are all the reasons I can't put it down.

The Story Is Simple Yet Strangely Moving

Super Crush KO takes place in a neon-lit world not unlike our own. Our hero, Karen, is simply minding her own business when a beautiful and glamorous alien breaks through the wall to steal Karen's precious cat, Chubbz. Of course, Karen is willing to do anything to get him back, and that includes destroying hundreds of the robot minions that have been sent to stop her. 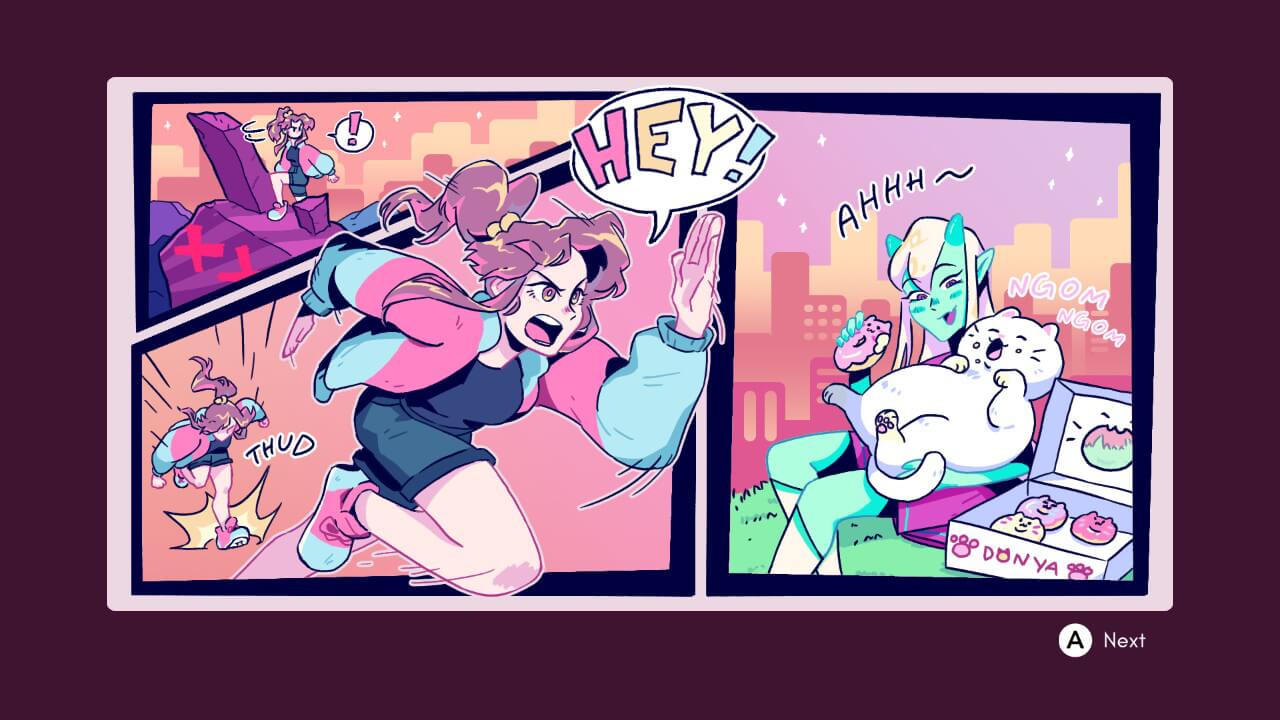 It may not seem all that deep on the surface, but as Karen gets to know her alien nemesis, she begins to understand what she's truly after, and as the player learns more about her motivations, it becomes hard not to love her— despite the evil mech army. There's powerful compassion behind the story, and at the very end of it, a resolution is found through common ground, and not violence. It wasn't at all what I expected going into the game, and it unfolds in a funny and believable way through gorgeous comic book-style art that will stick with you even once you've completed the game. 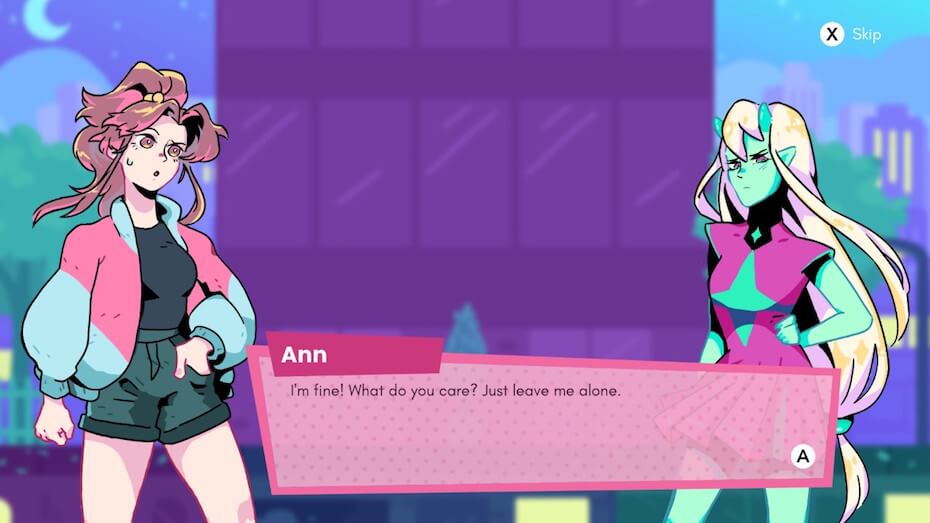 It's Easy to Pick Up, But Tough to Master

This isn't an incredibly difficult game, and I feel that with a little practice and persistence, anyone is capable of making their way through Super Crush KO. However, perfecting your movements and mastering the game is another matter entirely.

All of the advanced moves, such as the side-swiping Twister Drill and the shoryuken-like Uppercut Slice are obtained in the first handful of levels. From there, it's all about learning how to string those abilities together, alongside your standard punch combos and shots from a laser blaster, to take out hordes of enemies without getting hit along the way. It might sound simple, but when the screen is packed with enemies, each with their own unique behaviors and patterns, things can get tricky, fast. 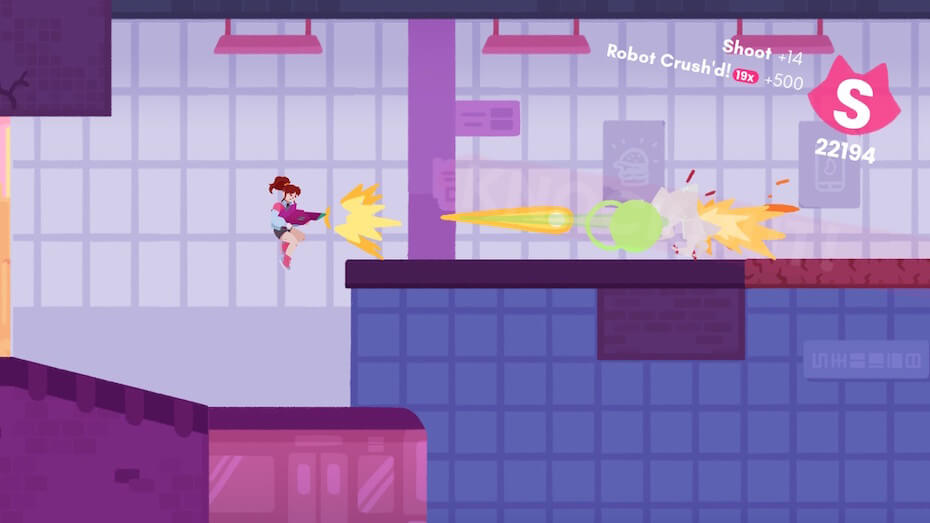 Karen's health meter consists of four hearts, and while some damaging obstacles will only steal away half a heart, most enemy attacks will take a full one. When you do get hit, you can regain health at periodic checkpoints, as well as by defeating certain enemies. Even so, as the game gets more difficult, you may find yourself dying, repeatedly, until you can master difficult groupings of tough enemies. And since you only have five lives for each level, that means you just get five attempts before you get a game over screen and have to begin the level anew from scratch.

Early on in the game, I found that I had the most trouble with a spiky, red-projectile shooting robot because I kept failing to dodge its attacks. As I played, I eventually got more comfortable with its movements and found out how to stop getting hit—which was good, because later on, other enemies copied its moves, only on a much larger scale. But by then, I was more prepared, and learning the new movements was easier because I'd taken the time to figure things out.

Super Crush KO sets the tone and pace right from the opening tutorial, and though the gameplay style remains consistent over the course of the challenge, the enemy types manage to evolve in a manner that means it never feels stale or repetitive. It remains challenging and thrilling up to the very last boss—and even once you've beaten it, you probably won't put the game down.

The Game's Signals Are Crystal Clear

One of the reasons Super Crush KO feels so good to play is that its art and sound are brilliantly designed to help you always have a grasp of what's happening. For one, each and every enemy in the game has its own distinctive design, and all it takes is seeing it once before you know what robot that is and how it will behave, allowing players to forge their plans of attack at a glance. When enemies do share physical similarities, you intuitively understand that they'll also share behavior, so you know how to approach new baddies, even when you've never seen them before.

Enemies also broadcast their movements in a way that's incredibly helpful. Before they ramp up into an unstoppable attack, small lightning bolts will appear by their heads to show you they mean business, giving you time to get out of the way.  If you see a red projectile, you know it can move through walls, and your best bet for dodging it is the dash move. That means that even when the screen is packed with enemies and flying projectiles, the clear design allows players to comprehend what's happening on the screen, and that's a difficult thing to achieve.

Other signals are huge helpers in the midst of a big battle. For example, when your special meter fills up, a sound effect plays and Karen glows to remind you that you're primed to use it. And when you're reading into the final area of a level, the game alerts you with an alarm sound and three exclamation points to tell you that this is the end of the line and you're in for a hectic fight. That cue can remind players not to be reckless and get them to focus with the end in sight.

It Has a Ton of Replay Value

Super Crush KO isn't an especially long game by any means. It's made up of a tutorial level plus four worlds, each featuring four distinct levels and a boss fight, and more players will be able to blast through it in a handful of hours. 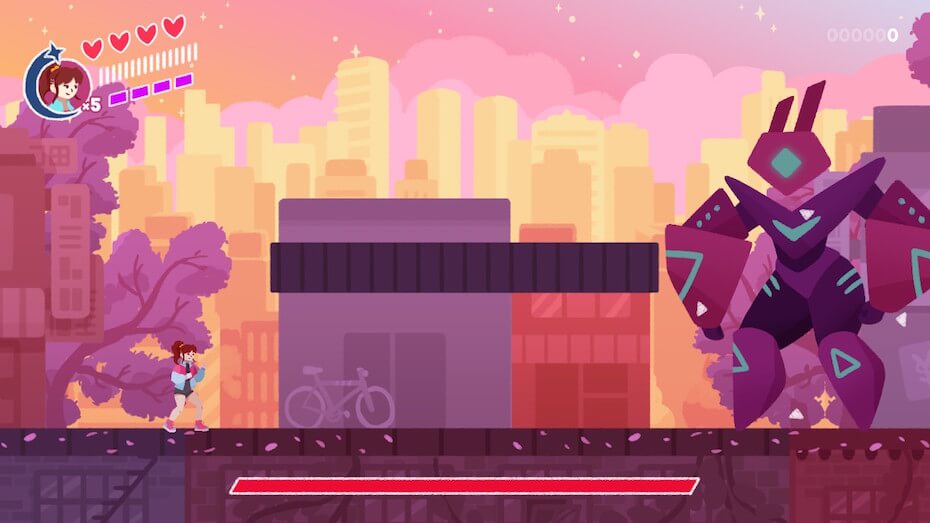 However, since the game is all about how well you play, and not just getting through it, there's a massive amount of replay value here. Every fight you enter starts a combo counter, and the goal is to keep it going until you can beat a segment of the game with the highest rank. Trying to rack up high scores is more fun than it has any right to be, and the fact that you're rewarded for certain achievements, and penalized for mistakes, gets players to approach each level strategically and aim for that coveted S+-rank. 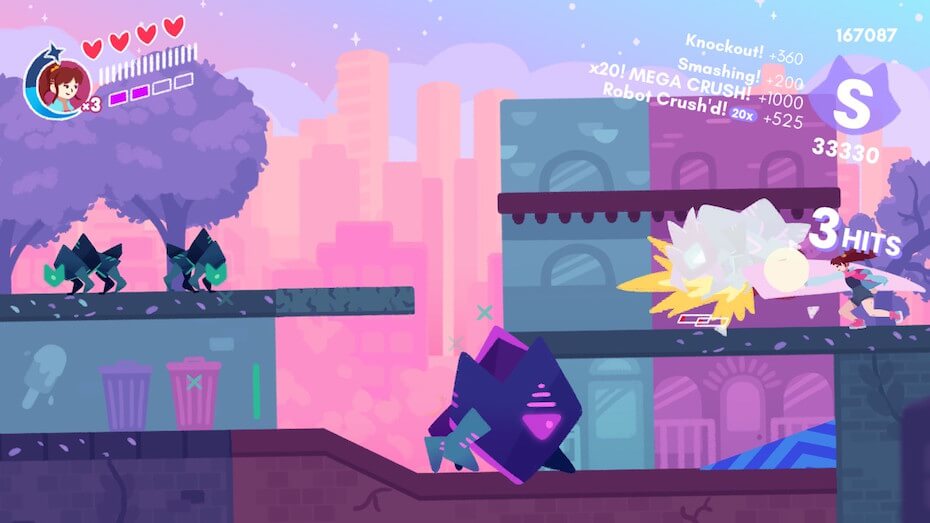 But I'm not going back to increase my C-ranks just because I'm embarrassed by them. Super Crush KO just feels good to play, with smooth controls, amazing flow in the gameplay, and baddies that are super satisfying to take down. Those strong controls also mean that the game feels fair, and whenever I got hurt, I knew it was because I was being careless and overzealous, rather than it being the game's fault. Even though I'll probably never rank too high on the game's leaderboards, there's a strange reward in simply beating levels that will keep me coming back to this game again and again. 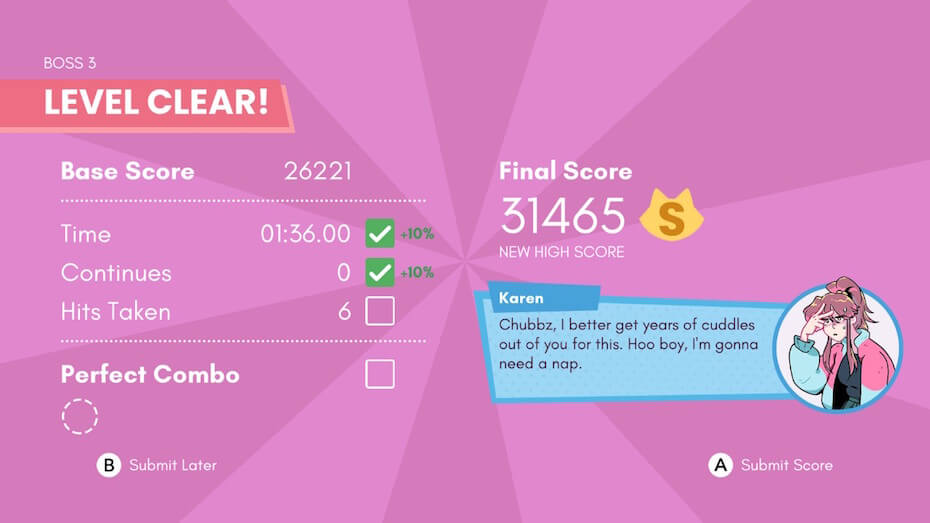 Super Crush KO is out now on Nintendo Switch and Steam for $14.99.

Games don't have to be expensive to be amazing. Click HERE for out favorite Switch games of 2020 under $20.