Here's Everything We Felt Playing the Upcoming Super Mario Odyssey

If you saw E3's Super Mario Odyssey trailer, you probably found it utterly bizarre in the best way possible. If you didn't, what are you waiting for?

I consider myself very lucky to have been able to play multiple rounds of the new Mario title at the event, and plan to share everything I can remember about it so you can get amped about it, too. 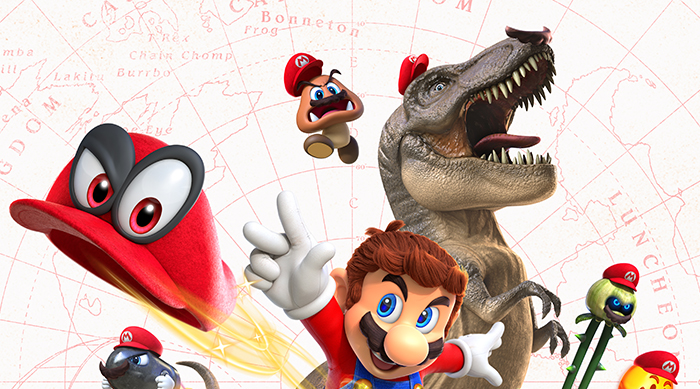 The upcoming game for the Nintendo Switch officially brings Mario back into a 3D sandbox game for the first time since Super Mario 64 and Super Mario Sunshine—it's been 15 years! The new game feels like an homage to those classics while improving on them in pretty much every way. All of his classic maneuvers from those games are back, with one major update in the addition of the sentient Mario hat, Cappy. 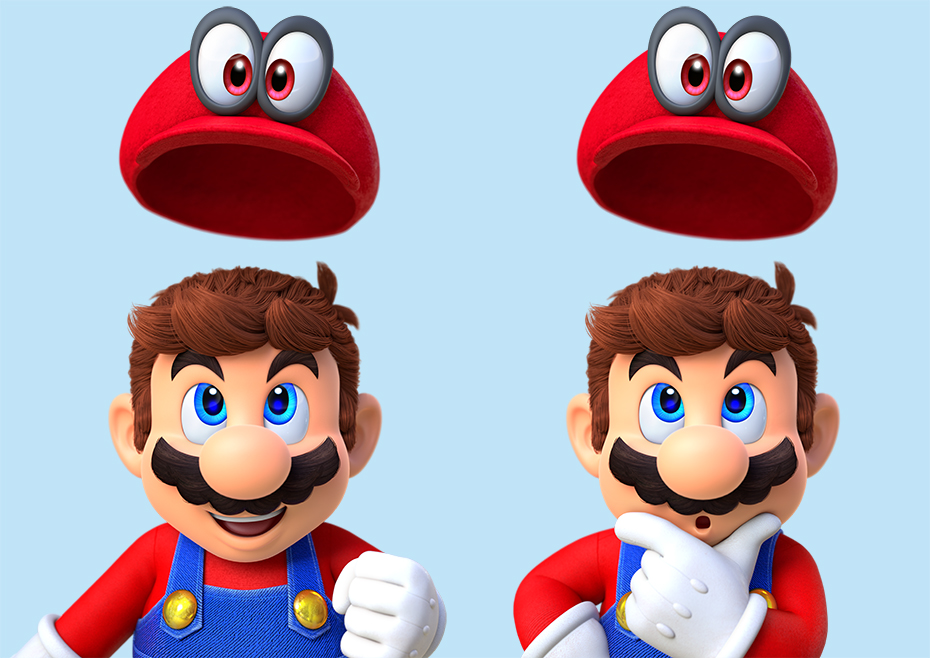 Cappy may look like a simple red hat with googly eyes, but it adds a ton of depth to what Mario is able to do. Cappy is now a projectile who can be thrown at enemies and can even be jumped on to cross wide gaps. But best of all, in a new move revealed at E3, Mario can use Cappy to temporarily take over the bodies of any character (and some inanimate objects) not wearing a hat. 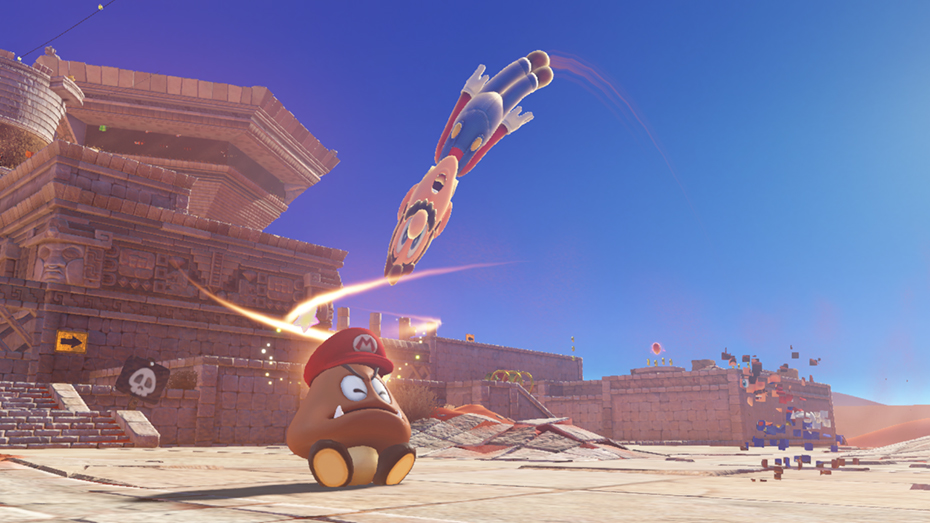 The game also utilizes the motion controls embedded within the Joy-Con controllers. With the press of a couple of buttons you can get Mario to do a new roll move, and you can increase its speed by shaking the controllers in unison. When you're standing around, moving them together will allow you to throw your cap in a circle around you, potentially possessing surrounding enemies.

During my time with the game I used Cappy to take over the bodies of an RC car-driving businessman in a suit, a flying Bullet Bill who could soar to previously unreachable areas and an Easter Island statue-like being whose sunglasses allowed me to see hidden platforms. At one point, I even became a manhole cover, scooting aside so Mario could leap into the world hidden below. The game's incredible trailer also shows Mario taking over a hulking dinosaur, which I wasn't able to experience myself—though I am really looking forward to the day that I do.

The plot appears to revolve around the fact that Bowser has kidnapped Princess Peach (again) and is planning a wedding, forcing Peach to marry him. It's up to Mario to stop Bowser as quickly as he can. In the trailer, it actually appears that Cappy was once worn by Bowser but has switched sides to aid Mario. That's a good thing, not only because Cappy's abilities are essential for Mario's success, but also introduces the game's most interesting to features. 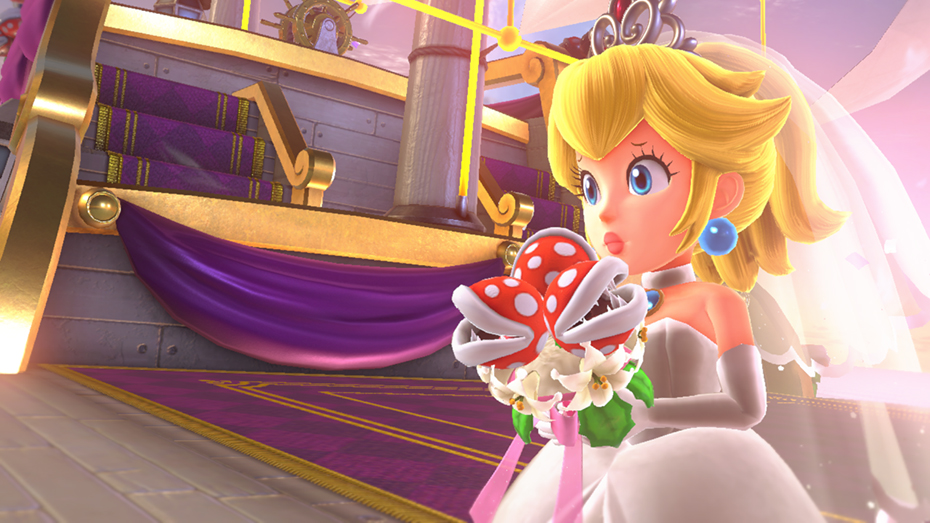 In order to pursue Bowser, Mario must make use of his new hat-shaped airship, called the Odyssey. To power this ship, he'll have to nab moon-shaped collectables scattered across the various worlds. Like stars and shine sprites in the past games, you earn them by completing fun level objectives. 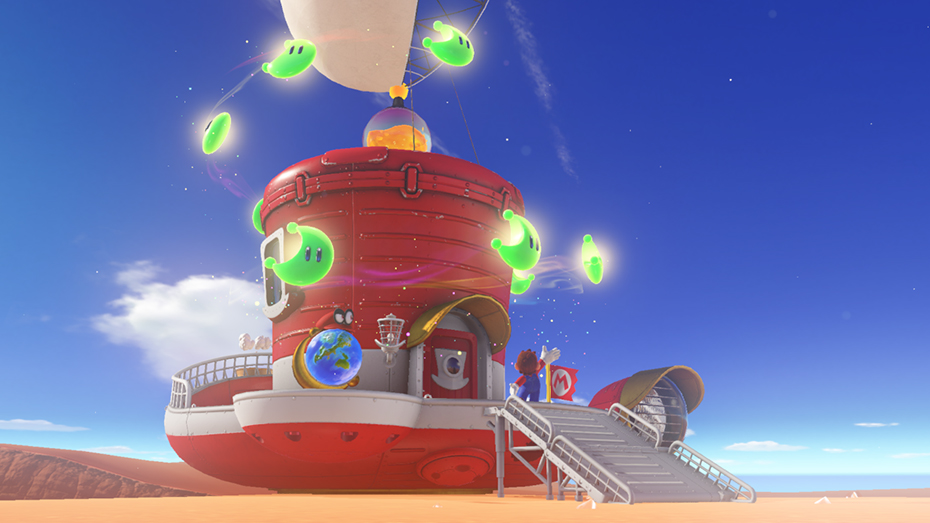 During my time with Mario Odyssey, I was able to play within the game's Sand and Metro Kingdoms. These 3D worlds are pretty massive—but not so big that they become hard to navigate, as it can be in huge sandbox worlds. No matter where I went within each of these worlds, I always had a rough idea of where I was.

The Sand Kingdom level takes place in a Dia de los Muertos-inspired desert town which has become frozen over after an issue with the world's water. Its skeletal inhabitants are left in a perpetual state of chill, and it's up to you to discover what's going wrong.

My favorite discovery within this world was a pixel pipe that merged me with the wall and transformed the game into a Super Mario Bros.-style mini game. This mechanic feels really creative, reminding me somewhat of sections in The Legend of Zelda: A Link Between Worlds where Link could turn himself into a moving painting to traverse certain areas. Within these flat levels, Mario can collect coins, break blocks, dodge enemies and scale towers, emerging at the end of the level to new heights. 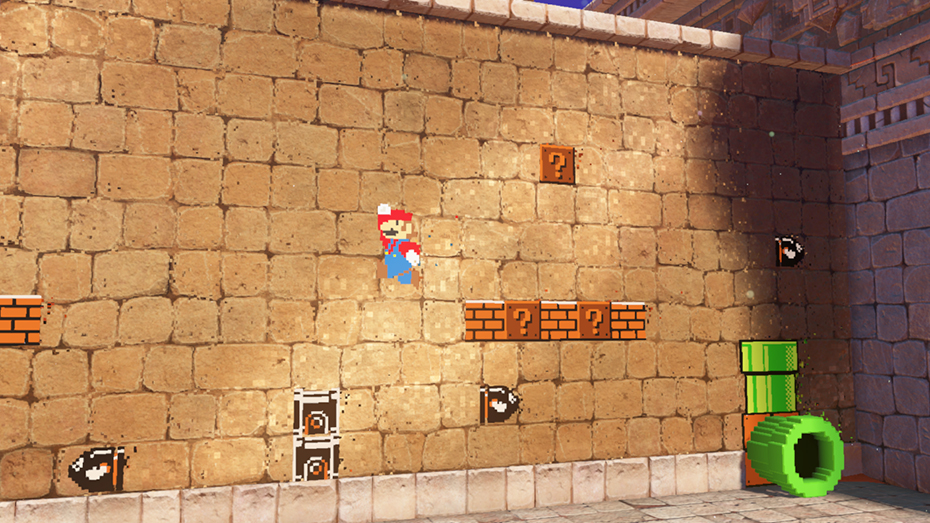 The other world, the Metro Kingdom of New Donk City, felt more like a real city, full of taxis, skyscrapers and well-dressed business people. Here you can skip rope, ride a scooter around town and talk to people.

I especially loved that the classic Mario character Pauline is the Mario of New Donk City. You may remember her from the original Donkey Kong games. It seems she's moved right past damsel in distress to successful politician. She's also a musician, and her song "One-Up Girl" is a jam.

And in classic Mario form, the moons are far from the only collectables within the game. In addition to the classic yellow coins, you'll encounter purple ones, which have their own unique look in each area and can only be used as currency in the world in which they're found. Each type of coin can be used to unlock outfits in each area, giving Mario a look that totally suits the situation. I'm guessing they'll also be used to progress through the game. 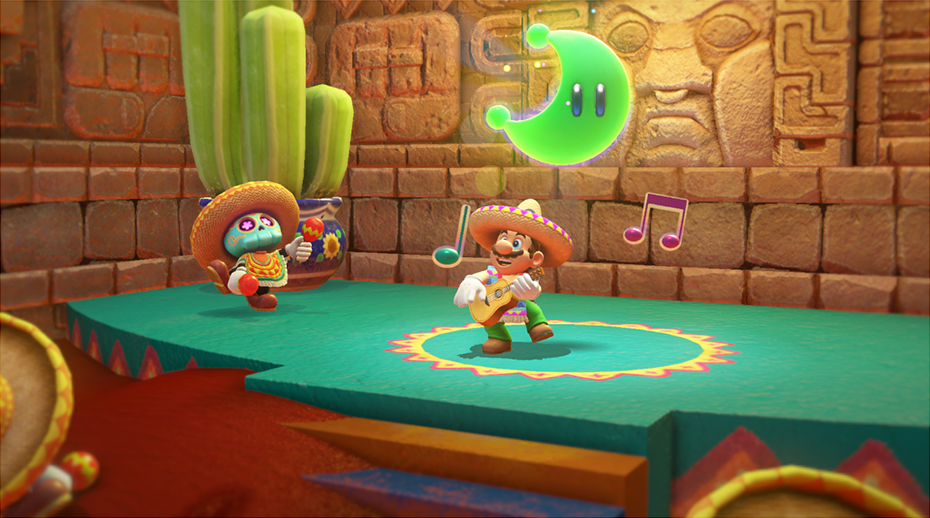 I'm also obsessed with these upcoming Amiibo figures of Mario, Bowser and Peach in their wedding day best. I think we're about to see a lot of these as wedding cake toppers.

I can't stress enough how much fun this game is. It's innovative, intuitive and great to look at, and I can't wait to see more of it. I also think the motion controls were fluid and easy to control in a manner we've never seen in a 3D Mario game. If you were impressed with what Breath of the Wild did with The Legend of Zelda series, prepare to be thrilled again by what Super Mario Odyssey can do.

It releases Oct. 27 on the Nintendo Switch and I am literally counting down the days. As of this writing, it's 133, by the way.

Excited for upcoming Nintendo games? Click HERE to find out why we're so thrilled about the upcoming Metroid titles.