Nintendo Switch just got its first Mario Party game, but is it any good?

The folks at Nintendo generously provided me with a review key of the game so I could determine that for myself. After many hours playing with it, I've determined that it's a big win for a number of reasons—even if there's one feature I'd love to change it.

The Mario Party franchise has been around for nearly 20 years, but Super Mario Party's boards manage to feel totally fresh thanks to a couple of newly introduced mechanics.

The first is character-specific Dice Blocks. While rolling dice has always been a staple of Mario Party, this is the first time that characters have had the option to use their own individual dice, with unique numbers printed on the sides. They can stick with the classic one-to-six dice, or decide to use their own and see what happens.

For example, Mario has a nice and balanced dice block of 1, 3, 3, 3, 5 and 6, while Bowser has two sides of the Dice that will make you lose three coins with 1, 8, 9 and 10 on the other sides. Essentially, the bigger risks you're willing to take, the more you might be rewarded. For the first time, this also means that selecting a character in the game is strategic. In the past, I'd always just pick a character I liked. Now, I might avoid certain ones because their dice require too much of a gamble.

All characters from Mario Party: Star Rush also make a return. By landing on certain areas of the board, you can recruit characters who aren't yet in the game to join you on your quest for stars. Not only does this add their unique Dice Block to your arsenal of dice to select from, but they also increase your rolls by one or two moves every turn. Even more, they join you in certain minigames, increasing your odds of winning. Allies have gotten me out of a pinch on more than one occasion. 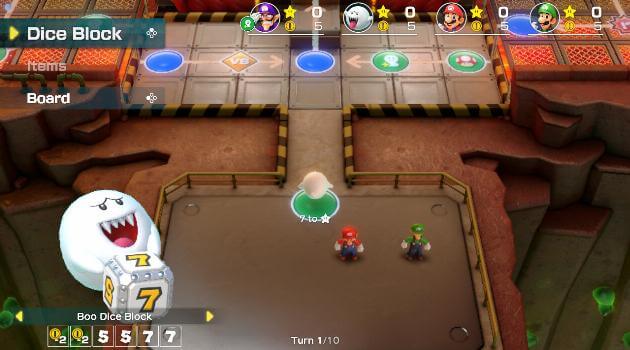 Super Mario Party is interesting because the Mario Party mode is just one component of the core gameplay. There are a bunch of new game modes packed into the game, so there's something to like no matter what kind of player you are. I've heard some people complain that the game only features four Mario Party boards, but they each provide their own rich experience and are just the beginning of what the game as a whole has to offer.

As always, the main mode is still Mario Party, in which four players go head-to-head to travel across the game board, playing minigames to collect coins and race to purchase as many stars as possible. As always, each course has its own obstacles and wildcard events that can push you to update your plans in an instant (like an Indiana Jones-style boulder forcing you to run away and lose a ton of progress). 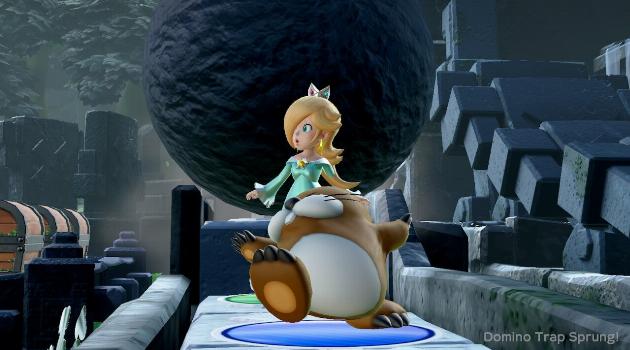 Though there aren't a lot of boards, each one is totally different from the others, so depending on your mood you can play in a casino full or riches or travel across islands made of fruit. Your goal in any of these levels is to collect more stars than any other player, and even if you end the game with a commanding lead, the bonuses given out at the end can completely change the outcome of the game. The parameters for the extra stars also change every time you play, so you never know what's going to happen. 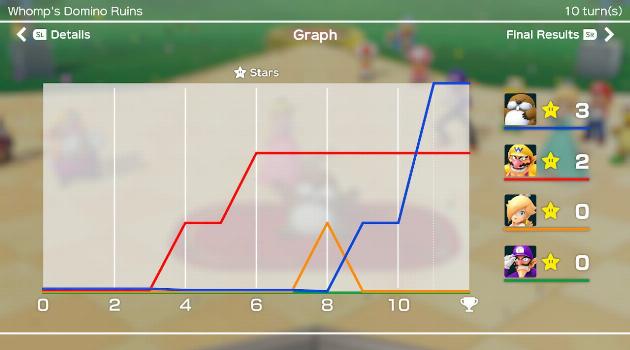 If you're playing with a friend, you may also want to give Partner Party a shot. While it follows most of the rules of the traditional Mario Party, they're completely different experiences. For one, Partner Party is all about teamwork, and you and your buddy work together throughout the entire game. Secondly, it changes each of the four game boards into grids where you can travel anywhere you want as long as you have the right number of moves.

In this mode, all of the minigames are collaborative, and any coins or items you collect get pooled together for either of you to use. You can even high-five your partner after a win for extra coins. Plus, if you can both land on the spot where you can purchase stars, you can buy twice as many before it moves along to its next slot. This mode breathes fresh air into the classic board game formula and is a nice change of pace from round after round of traditional Mario Party. 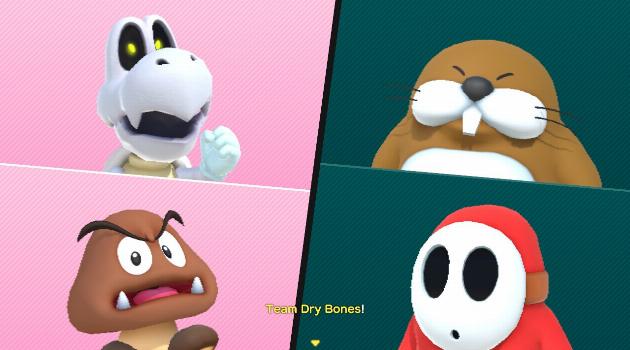 If you want to try something that requires even more teamwork, there's River Survival. This game puts four characters together in a raft barreling down a roaring river as they race against the clock. To steer, you must work with your friends to paddle your way toward your desired destination, with each player waving a Joy-Con around to swing their paddles.

Nabbing stopwatches adds a little time to the clock, but to make it to the end you'll want to pop big red balloons, which launch minigames. Each of these minigames will also require everyone to work cooperatively in order to succeed, and the better you do, the more time will be added to the clock.River Survival also has branching paths, each with their own obstacles and enemies, so you'll need to play it over and over to see all of its sights. 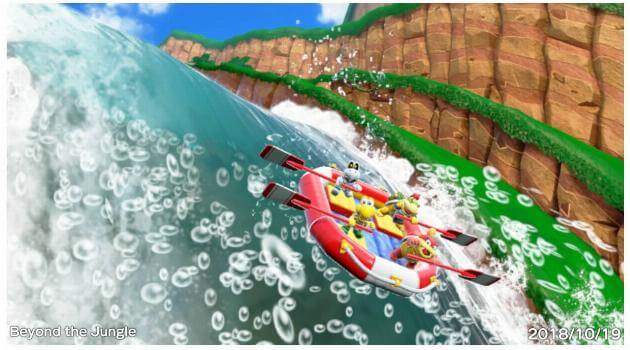 Lastly, there's Sound Stage, which consists of rhythm-based minigames. They typically involve moving the Joy-Con controllers in just the right ways in time to the beat of the game. They're way more fun than I predicted, and a great way to implement different aspects of what the Nintendo Switch can do.

You can't talk about a Mario Party game without talking about the minigames, and this one has some of my favorites in the entire series. Because there are so many game modes, they feel more varied than ever before. Along with the classic four-player, three-on-one and two-on-two games, there are games where you all have to work together toward one goal as well as innovative minigames based on motion controls.

Some of the one-on-three games do feel slightly imbalanced, but that's the nature of Mario Party and just adds to the frenzied excitement when you're playing with friends. They're just plain fun, and there aren't many that I dread playing because I'm so terrible at them. I'll randomly think about this steak-cooking minigame during work because it's so satisfying to play—especially with the rumble on. 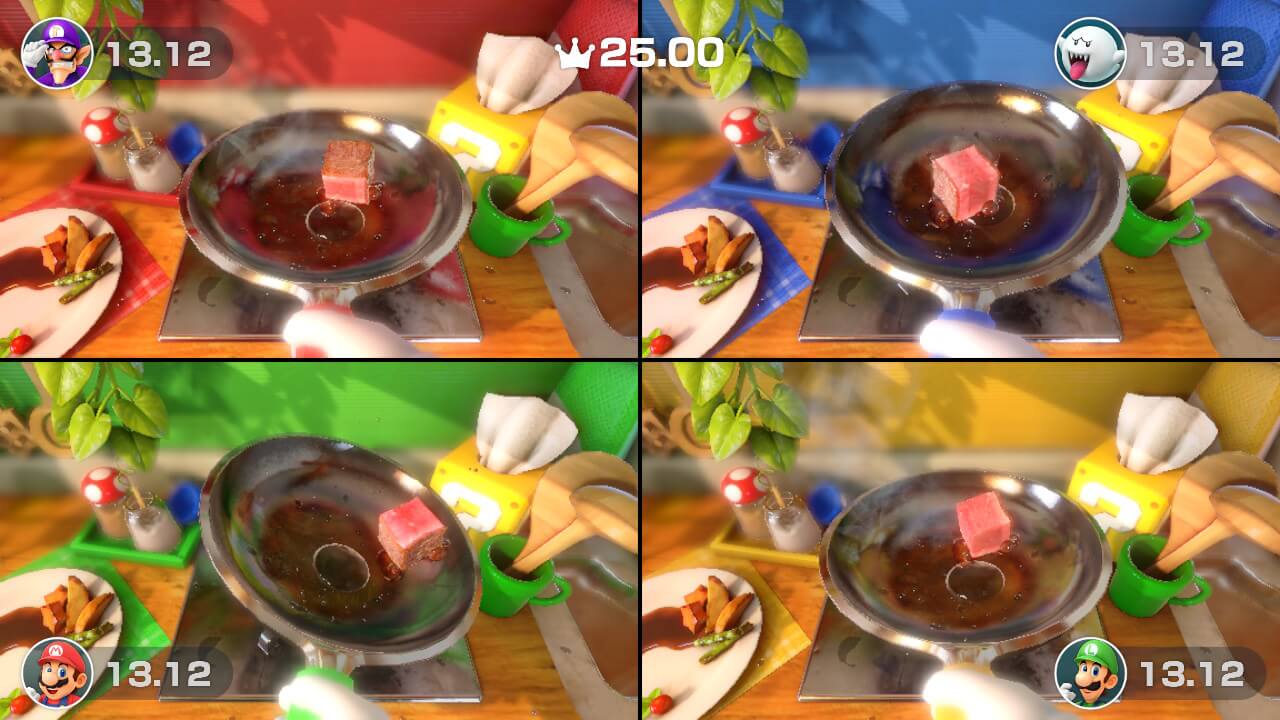 In fact, one of my favorite things to do in the entire game was to complete Challenge Road. Once you unlock all of Super Mario Party's minigames, this mode has you play through all 80 of them to get to the finish line. To beat each one, you must hit certain parameters. Sometimes, that means getting a certain number of points or not getting hit, while others it means you must take first place. I loved challenging myself playing each of these games, though it was tricky sometimes because you aren't served with the directions for each game like you are in other modes. Once or twice I got stuck on a game I'd never played before, but overall it was a delight and I look forward to trying it again for the tougher "Master Challenge."

Nintendo really outdid themselves with the character selection in Super Mario Party. All of the old favorites are here, but I adore that they also made minor villains like Goomba, Shy Guy, Monty Mole and Hammer Bro playable characters. I find them so charming and cute, and I've really only played as Bowser's minions thus far in the game. I don't know how Goombas can play all these games without hands, but it just works. 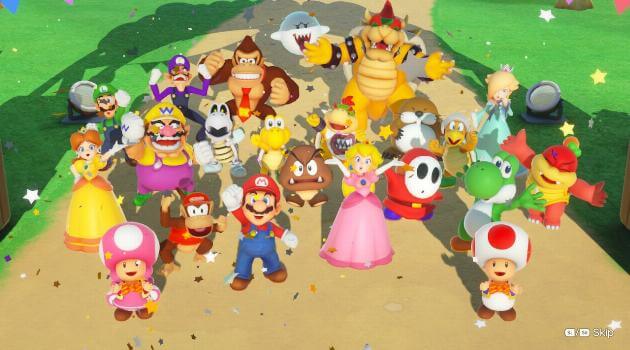 You wouldn't think that these characters could have so much personality, but every little facial gesture and reaction is lovingly crafted to make them totally relatable. I particularly love the cutscene that occurs when one player collects stars. In the upper lefthand corner, one character is triumphant while the others sigh in frustration. 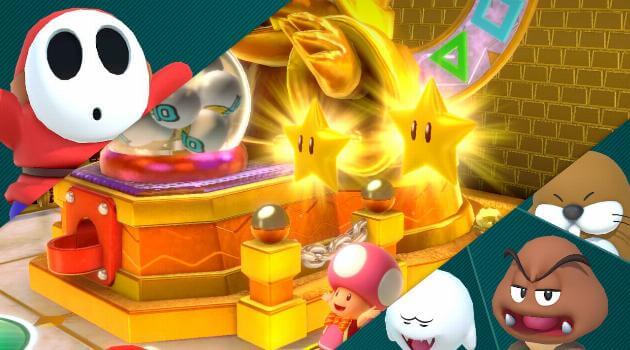 I'm also thrilled that Pom Pom is an unlockable character. There's definitely a gender imbalance on Bowser's side in the Mario games, and she's just the character to mix things up. She's been appearing more frequently in some recent Mario titles, and I adore her spunk. I've stopped playing as anyone else ever since I unlocked her. 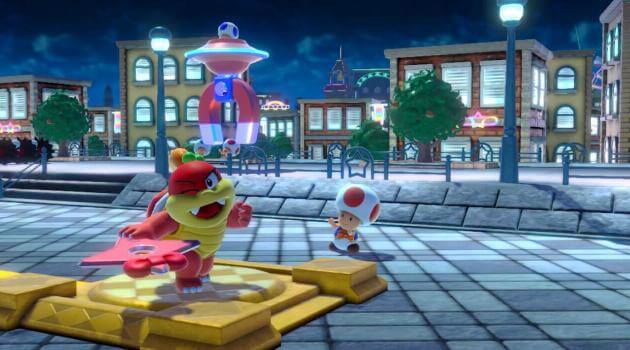 Now here's the thing I don't love about Super Mario Party—you have to play it with the Joy-Con controllers. I actually don't mind playing with the Joy-Cons for the most part, but I dislike having that as the only option. When I booted up my Switch to play my first-ever round of the game, I gave a friend my Pro controller and set up my own Joy-Con Comfort Grip controller only to find that I'd have to disconnect the little controllers from each side of my Switch and play using those instead.

After finishing the game, I completely understand why this decision was made. Many of the minigames utilize rumble or motion controls which work best with the small Joy-Con controllers. However, other controllers have these features built-in, too, so it would have been nice to have other choices. Some people find the Joy-Cons too small to comfortably hold and play with for a long time, though I haven't really had this problem.

Mostly, I find it annoying because it means the game can't be played in handheld mode. I often like to get in my pajamas and play the Switch in bed before I go to sleep, but in order to play Super Mario Party in this way, I had to prop the Switch up on a pillow on my lap to play comfortably. While that wasn't ideal, I suppose it didn't stop me from playing hours and hours of the game there, either. Despite this shortcoming, I still think the game is worth every minute I've spent playing it.

Super Mario Party is out now on the Nintendo Switch for $59.99.

If you adore Mario Party minigames, click HERE for a list of our favorite (and least favorite) games from Mario Party: The Top 100.