A free downloadable demo is now available for Super Smash Bros. for Nintendo 3DS, giving players across North America a chance to test out the game before it releases on October 3! 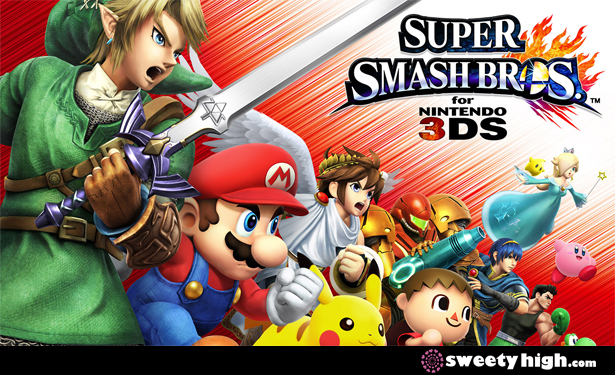 This Super Smash Bros. demo aims to give players just a taste of the upcoming game, the 4th in the Super Smash Bros. series. It pits Nintendo characters from all of the company's biggest games against each other in a free-for-all!

Of the 37 playable characters the game offers at its start, this demo lets you play as and fight against just 5. SSB veterans will be well-acquainted with Mario, Link and Pikachu. However, the demo also lets players try their hand at playing as the robotic blue hero MegaMan as well as the villager from Animal Crossing!

Like the previous games, the new Super Smash Bros. will allow players to battle each other utilizing their characters' unique moves and abilities, with the help of items and interactive stages. Though dozens of stages will be available in the final game, only the Battlefield stage is available in the demo.

So far, the new game appears to be chock-full of classic video game references. A bug from Galaga might appear, using its tractor beam to throw a player offscreen, or two pixelated Pong paddles and a ball can materialize, knocking players around as the ball bounces back and forth across the screen.

The Animal Crossing villager is especially fun to play. As the villager battles, the character can fire slingshots, chop trees, drop flowerpots and fly with the help of balloons a-la the Nintendo classic, Balloon Fight. In the villager's Final Smash move, the character's landlord and employer, the raccoon Tom Nook, constructs the villagers house in a flurry of movement that stuns all other characters in range!

And though the Animal Crossing villager is male on the character selection screen, by picking between different costume variations, you can actually select from four different villagers, two male and two female!

37 characters may seem like a lot, but that's only the number you'll be able to use when you first switch on the game. 12 more characters can be unlocked through gameplay!

The free demo lets gamers play up to 30 times. We just might use up all of ours before the game comes out on October 3!

Will you be checking out Super Smash Bros. For Nintendo 3DS? Tell us your thoughts in the comments below and share your favorite video games with us at Sweety High!

Liked this story? Also check out our analysis of girl power at Nintendo and our reviews of Nintendo 3DS titles How To Train Your Dragon 2 and Tomodachi Life!