Susannah Benjamin is an ambitious young photographer whose impressive credits include getting hired as Beyoncé's concert photographer just as she was beginning her freshman year at Yale. 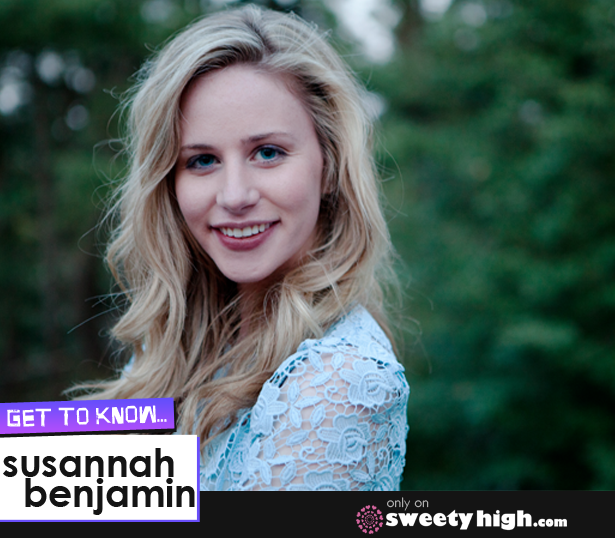 In a recent interview, Susannah told us about her biggest passions and inspirations, as well as the stories tells through her photography!

Susannah Benjamin was 11 when she started snapping photos.

Despite her accomplishments, including being featured in the Huffington Post, she wouldn't call herself a pro.

"I've never considered myself a professional photographer because I spend so much time in school," she said. "But I'm still hoping that it can be a career."

One of the shoots that put her on the map, no pun intended, depicts a young woman bundled in road raps.

"Those photos were from one of my earlier shoots, when I was 15 or 16," she said. "My initial idea was that, when you look at a map, one inch can represent thousands of miles. An inch on a map isn't actually as close as it seems to be. I wrapped my map to show this wanderlust and desire to travel and to be all around the world."

Susannah explained that many people have an innate ambition to travel across the world.

"But it's also the desire to have all of the people you love in one place," she said. "It seems so small and so simple on a map, but in reality the distance is so much broader."

Many of the people that Susannah loves live in Ireland, a country she cites as one of her biggest artistic inspirations.

"My mom is from Ireland, and she is actually the only one on her side of the family who doesn't still live there," she explained. "I've been spending almost every Christmas and summer in Ireland since I was a baby."

The country's distinctive scenery and culture have helped it to cement a very special place in Susannah's heart.

"It's so delighting and so beautiful, with the landscape and all of the colors there," she said. "But it's also about the people. The people there are such natural storytellers. It's such an artistic and literary place."

"Everyone's so open to talking and sharing their own stories," she said. "It's very easy to make friends with anyone you meet."

Her family also owns a pub there, giving Susannah a chance to meet all of the unique personalities that pay patronage.

"It's hard to put my finger on what makes it so inspiring, but it's a place I consider my true home," she said. "It's where I'm at my calmest and most artistic."

Susannah has used much of her photography to tell stories about issues that matter to her, including bullying and body image.

"That's one of my primary interests in art," she said. "My dream job would be to do an international photo campaign on anti-bullying and bullying activism in general."

These themes have been prevalent throughout her line of work because they're prevalent in the world around her.

"Whether or not my work is explicitly dealing with bullying, it's also dealing with depression and isolation and the feeling of not knowing who you are," she said. "That's something that's fascinated me for a long time."

Susannah started taking photos regarding bullying in high school, but she did a major shoot about bullying during her freshman year of college. She's currently a junior at Yale, pursuing a double major in English and French Literature.

She said her work was partially motivated by the stories of young people who have taken their own lives because of bullying.

"Every article says, 'It's such a shame, we should do something about it,'" Susannah explained. "It's always this very formulaic article that really does nothing to change it. I don't think anyone has really taken any dramatic steps to make the situation better. I think it's such a waste to think that these kids have their lives in front of them and they're made to feel so terrible that they end any possibility of getting a better life. It's not that hard to be kind to people."

Instead of being kind to others, many people are using the internet as an excuse to not take responsibility for their actions, she said. When teens have friends sending mean messages anonymously to others, they feel it's ok to do the same.

"It's really important to highlight all these problems," she said. "People should know that if they say one thing it can completely devastate someone. It can change their life for the worse."

She hopes that her photography will be able to influence the way people think about bullying and other issues.

"That's definitely the topic that I find the most interesting and that I feel I have the most purpose in shooting," she said.

Because she's so interested in affecting change with her work, Susannah's favorite subjects to photograph are people.

"I view photography as storytelling," she said. "Before I did photography, I wrote and I drew pictures, so I've always been thinking in the narrative context. One of the reasons I'm an English and French major is because I think I approach my work with a pretty literary point of view."

Part of that literary approach means that living characters are a crucial element of Susannah's photography.

"I always need to have people in my photos because I view my models as characters in a story," she explained. "I often write out a storyboard and draw out pictures, or even write a short story before I do a shoot."

At the end of the day, the photograph should tell this story.

"I want to express what's inside people and what makes them tick," she said. "I want to make photos that actually influence people, change people's minds about things and just strike them in some way. I don't want to just shoot something pretty."

It appears her work did hit home for certain people, because in 2011, at the age of 17, Susannah was set to work on an editorial shoot for Beyoncé.

Jenke Tailly, Beyoncé's creative director at the time, happened to be represented by the same agent as Susannah.

"He wanted to work with me because he liked my work, and he must have shared it with Beyoncé," Susannah said. "Beyoncé really liked the narrative aspect of my work. She had just turned 30, and she had done everything there is to do on the planet, so she was apparently looking to discover some new talent."

Susannah came up with a few ideas for Beyoncé photo shoots, and Beyoncé loved the concepts, but with Beyoncé going on tour and Susannah about to start her first week of college, the timing wasn't right.

Instead, Susannah was offered another opportunity.

"They said, 'She's doing a four night concert in your city, why don't you be her press photographer one of those nights?'"

"I had never done concert photography in my life, so I thought I had no idea what I was doing," she said.

The night of the shoot, Beyoncé's performance was being filmed, and many of the VIP spots for photographers were taken up by video cameras.

"I was pushing through the crowd trying to survive these really aggressive Beyoncé fans who didn't want their view blocked by the photographer," she said.

Still, Susannah managed to get her shots. At the end of the night she, like the other concert photographers, had to sign away the rights to the photos she had taken.

"I forgot about it, but then a couple months later, for Christmas, my mom bought me a DVD," Susannah said. "She was like, 'Oh, this is Beyoncé's newest DVD. I thought you'd want it because you like Beyoncé and you shot her."

Susannah was shocked when she turned the DVD over and spotted a photograph she had taken!

"Neither of us had known," she said. "No one had told us, so it was kind of a big surprise. It was a great Christmas to see it on the back of this major DVD."

Though Susannah still plans to make a career out of photography, for the meantime, her focus is school. Her immediate goals include graduating from college.

For most of her time in school, Susannah has only had time for photo shoots during school vacations and long weekends.

"It will be a real adventure and really turn a new page for me to be able to finally be done with school and wake up every day and focus 100 percent on photography."

Susannah has always found inspiration from seemingly unrelated areas of science, art and more. She encourages aspiring photographers to do the same.

"Don't be afraid to be different and explore," she said. "It's important to look at and be aware of other people's work, but my primary inspiration comes from drawing from other mediums."

She explained that it's important to see the artistic potential that's all around us.

"Don't dismiss things that aren't explicitly art as not worth your time," she said. "Don't think that just because you're a photographer you can't be interested in math or science or whatever. You can get ideas from anywhere."

Personally, Susannah gets many of her ideas from areas like neuroscience, psychology and philosophy.

"All these things that get your brain working and start thinking of things in a new way," she said."I think it's really important to always look for inspiration in seemingly different places that don't seem attached to art."

Secondly, she urged aspiring photographers always to work hard for what they want to achieve.

"If you have one shoot that's not a success, you might have to do it 100 times over to get it the way you want it to be," she said. "You have to have that perfectionism and that desire to get better."

To keep up with the latest work from Susannah Benjamin, be sure to follow her on her social pages below! You can also share your own original photography with us at SweetyHigh.com!