It's no secret that I'm a big fan of unusual ice creams.

Whether it's a bizarre flavor or something visually unique, I never miss an opportunity to test out something new. So when I found out that one ice cream shop was featuring dinosaur-shaped ice cream cones, I knew I'd have to check it out.

I reached out to Rachel Kanter, the founder and owner of Sweetosaur, who was generous enough to invite us out to the brand new Sweetosaur location in Torrance, California, so we could see these prehistoric treats in person.

The shop itself was tough to miss. The storefront is decorated with the shop's dino skull logo, fake foliage, T-rex figurines and a glorious depiction of Sweetosaur's signature Wafflesaurus Rex ice cream cones, so that there's no confusion at all regarding what customers are in for. 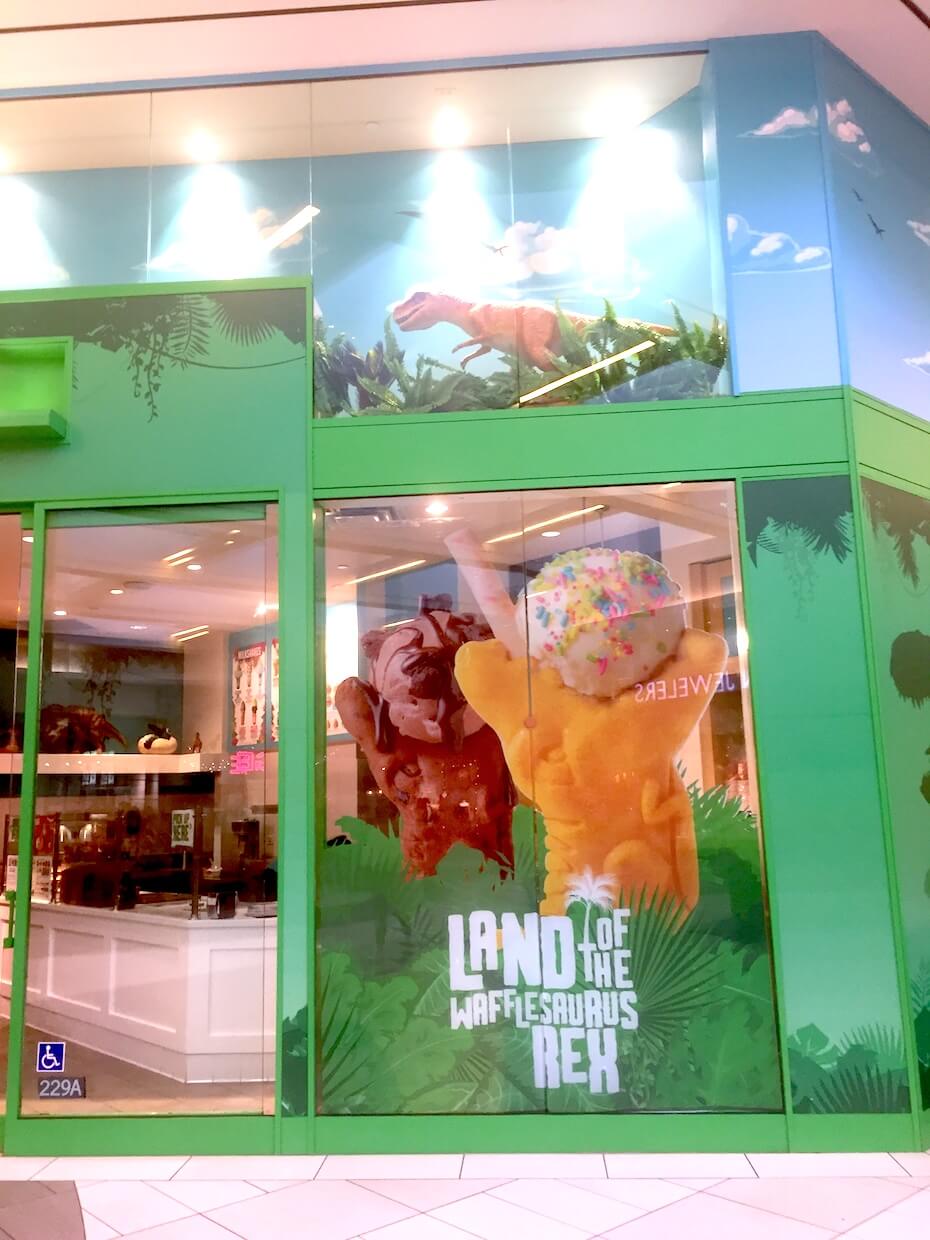 Just inside the shop and to the left was something I wasn't expecting at all: a rideable T-rex. It was early afternoon on a Tuesday while I was in the shop, so I didn't get the chance to see anyone actually ride it, but I was there when it started talking. To my surprise, it had the cheerful, perky voice of a little kid, and I was totally delighted by it. Behind it were shelves and shelves of adorable dino merch. If I didn't turn around, I would have thought it was a dinosaur-themed gift shop. 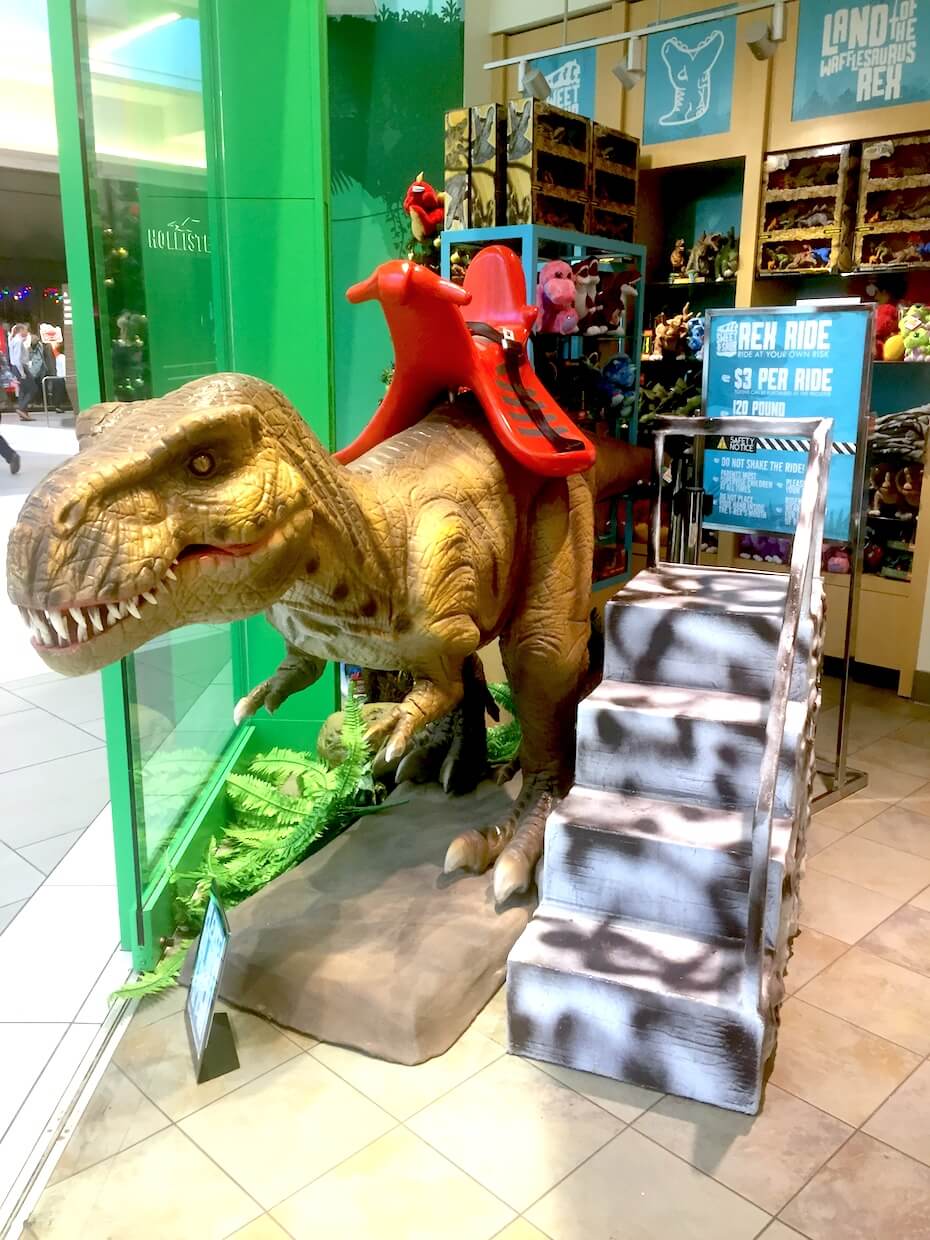 But the real magic of Sweetosaur was behind the dessert counter. One of the first things to catch my eye was a menu showing off their holiday offerings, including a reindeer-themed dinosaur scoop and a red velvet "Santasaurus." Both looked as cute as they looked delectable. 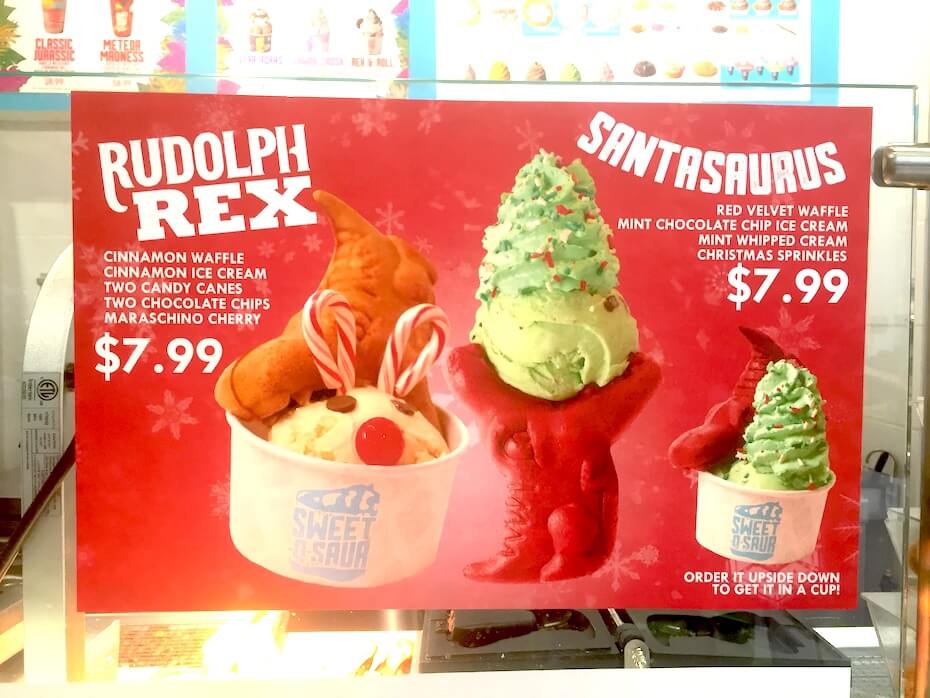 When it came time to meet Sweetosaur creator Rachel Kanter, I knew I had to ask her about how the ice cream shop came to be.

"My mom owns a business called Wonder of Dinosaurs," she told me. "It's a dinosaur-themed children's activity center and museum. I knew I wanted to do something dinosaur-themed, too. I'd been seeing a lot of cool desserts in fantastical and over-the-top unicorn themes, and realized I could do that with dinosaurs."

She knew the theme would work because of the broad appeal of dinosaurs.

"I feel like no matter what generation you're from, there was some dinosaur film or show that was tied to your childhood," she said.

Rachel always wanted Sweetosaur to prominently feature milkshakes, but realized that an additional dinosaur-themed element might be needed to stand out in the crowded world of Instagrammable desserts. There's where her dino-shaped Wafflesaurus Rex cones came into play. They were inspired by Japanese taiyaki, popularized here in the states by ice cream shop Taiyaki NYC. 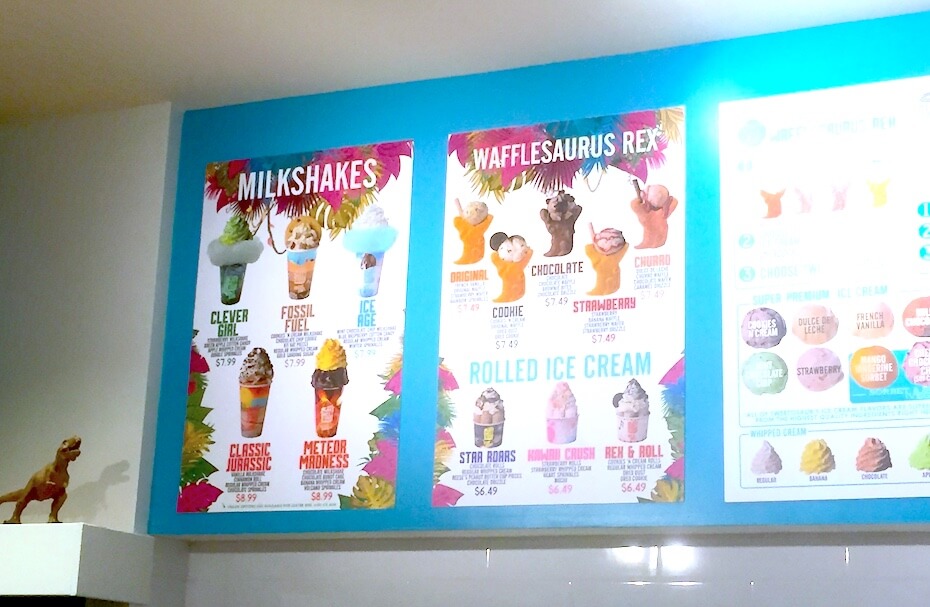 "They took the traditional fish-shaped dessert, typically filled with red bean or custard, and transformed it into an ice cream cone," Rachel explained. "When I saw their taiyaki cones, I realized I could probably make my own mold and create my own really cool T-rex cone."

To come up with her own unique milkshake flavors, she headed to Pinterest and Tumblr for a little bit of creative influence while making sure not to directly copy anyone else.

"Because I've done a lot of research, I wound up seeing a lot of places exactly copying someone else," she said. "Instead, when I see cool ideas I want to find out how I can make them different and make them my own."

But it wasn't easy to transform every ice cream concoction into something that would scream "dinosaur," so Rachel had to think outside the box.

"Initially, I was seeing a lot of brightly colored milkshakes, but I didn't want to put a bunch of dye and stuff in my ice cream and turn everyone's tongues blue," she said. "Instead, I went with vibrant dinosaur-themed cups to make them all stand out. Going over the top with it was the real challenge of it all."

For example, each shake has its own theme. For example, the Meteor Madness shake is topped with a mini bundt cake and a spray of banana whipped cream so that it resembles a volcano. The Kawaii Crush rolled ice cream has cutesy dinosaurs on its pink cup (as well as a  little drawing of Rachel's beloved dog). 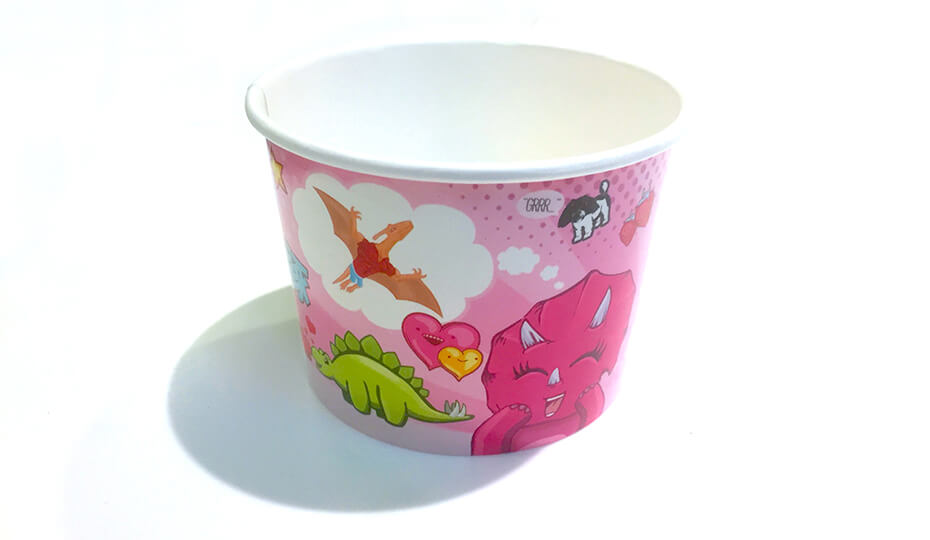 Of course, the most important part of the visit was actually trying the dino ice creams. First, I tried the Churro Wafflesaurus Rex, consisting of a dino cone dipped in cinnamon sugar with a scoop of dulce de leche ice cream, a drizzle of caramel syrup and a chocolate-y wafer straw. It looked amazing, and I had to take a photo of it up against the talking T-rex. 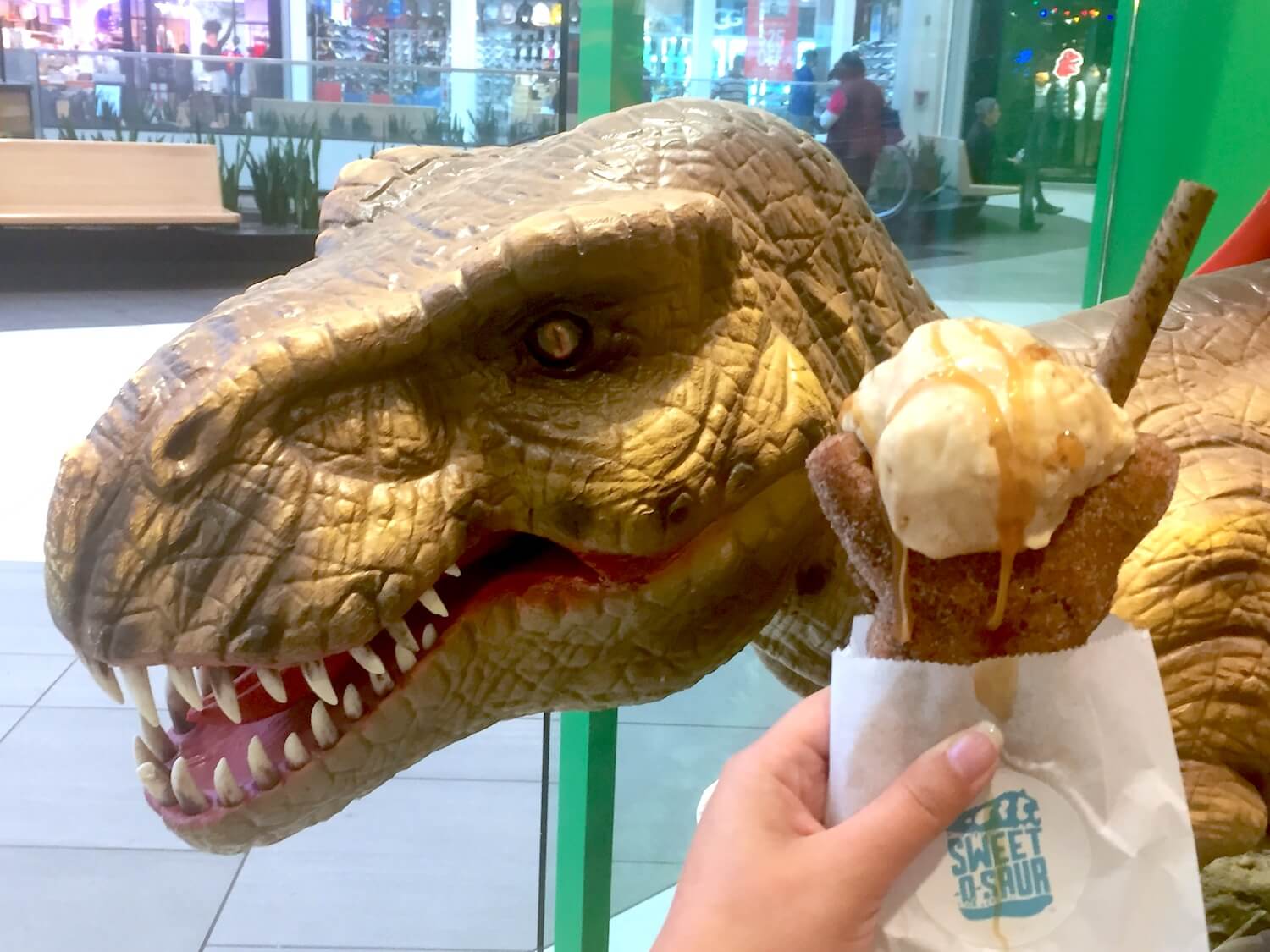 After eating the sweet, chocolate-y wafer, I plopped it upside-down into a cup for easier eating. It was just as irresistible this way and looked like the dino had jumped right into a cup of ice cream. Better yet, the flavor was everything I dreamed it would be. The cone tasted like a cinnamon sugar donut, and the caramel ice cream and topping were buttery and rich. The two flavors were marvelous together. 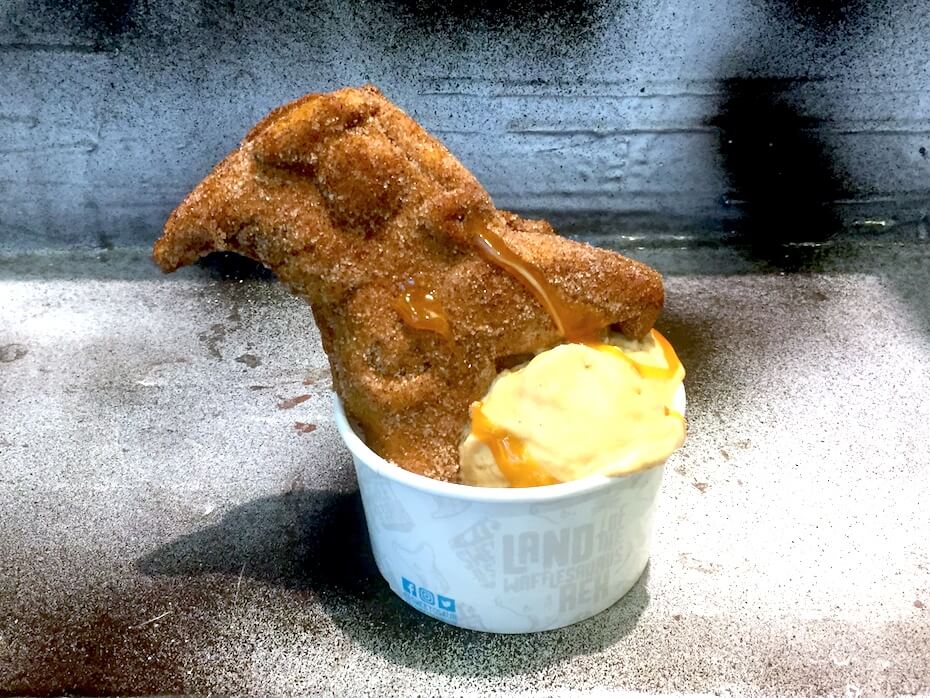 Obviously, I had to try a milkshake, too. Rachel recommended the Clever Girl, but prepared it for me with a little twist. It's a strawberry milkshake topped with green apple whipped cream and sprinkles, and surrounded by a halo of fluffy green apple cotton candy. My shake had strawberry whipped cream piled on top of the green apple for good measure. 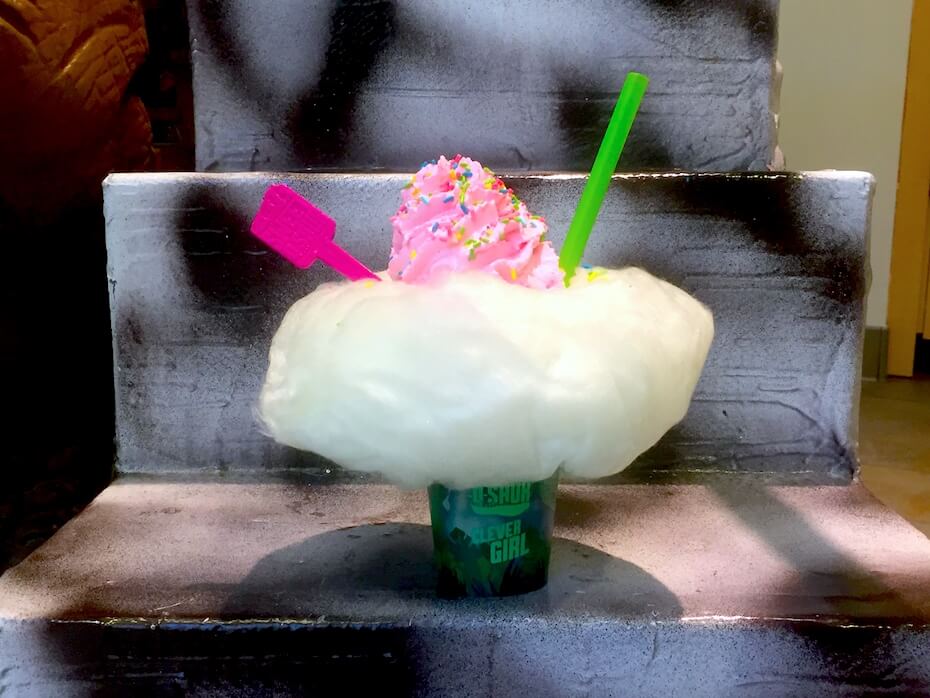 While the cotton candy made drinking it a slightly messy experience, I wouldn't have had it any other way. The green apple and strawberry tasted amazing together, and it was fun to punctuate sips by taking big sticky handfuls of cotton candy. There were also massive strawberry chunks blended into the drink and they'd occasionally jam up the straw, but when I finally got them it was entirely worth the trouble.

If you love dinosaurs and desserts and are visiting the Del Amo Fashion Center in Torrance, you really shouldn't miss Sweetosaur. They also have their original location in Riverside at the Galleria at Tyler, and regardless of what you order off their menu, you won't be disappointed by the ambiance or the flavor.

All the dinosaur-lovers out there should click HERE to find out what happened when I wore an adorable dinosaur handbag.