I Made Taco Pizza—and My Life Has Forever Been Changed

By now, I'm sure you've all heard of taco pizza—or as I like to call it, the greatest food hybrid known to man.

Invented by New Jersey-based eatery Tony Boloney's, this glorious creature has been making the rounds all over Instagram.

It's got to be one of the most unhealthy things in existence, but does it really matter? I mean it's tacos on top of pizza!

Because I don't live in New Jersey and can't get my hands on this bad boy, I decided to take matters into my own hands.

In honor of Cinco de Mayo I threw together my own version of this savory dish, with a little help from THIS vegan recipe. 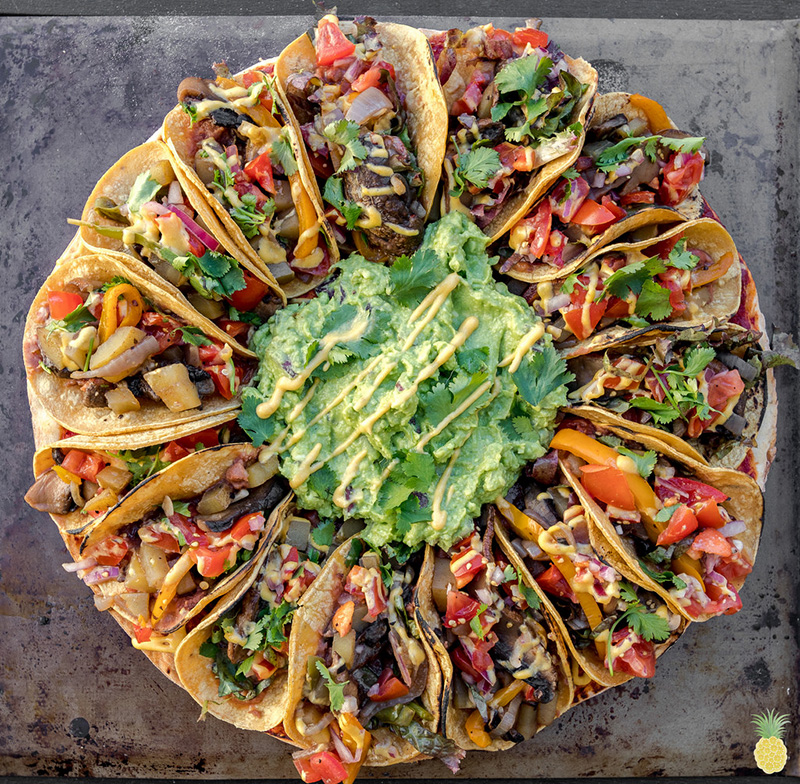 First things first, I had to gather all of my ingredients. The recipe I "followed" was more hands-on than I was into, so I basically just bought a whole bunch of prepackaged items that I could easily heat up in the microwave.

Here's everything I bought from the grocery store: 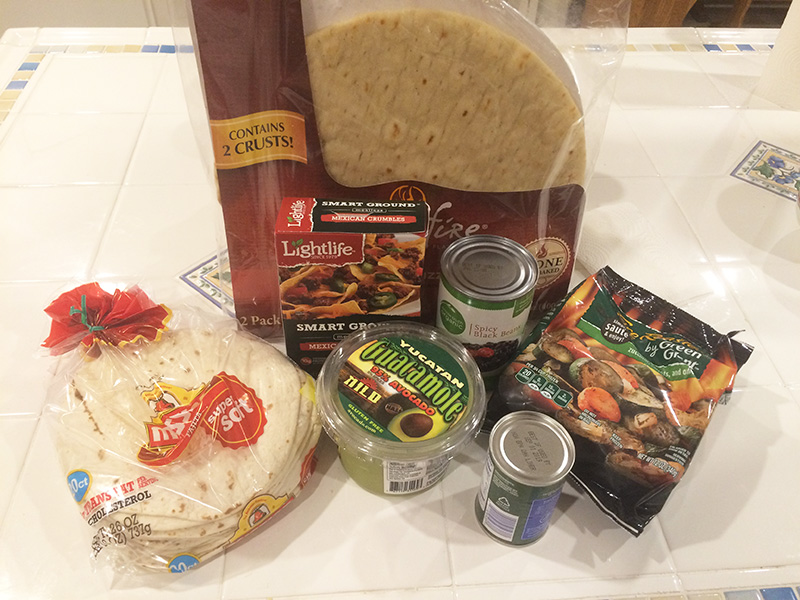 Before I got to work on the pizza, I preheated my own to 425 degrees.

Making the pizza base was definitely the easiest part of this whole experience. All I did was mix some tomato paste with a little bit of water, lather it on the pizza crust, sprinkle it with plenty of taco seasoning and bake it for 10 minutes.

While I let the pizza do its thing, I got to work on preparing the taco filling.

I started by microwaving the black beans. When those were done, I microwaved the taco meat. It was a very arduous process.

Next, I satuéed the frozen grilled veggies until they were cooked to perfection.

Then came the fun part—adding the tacos to the pizza. 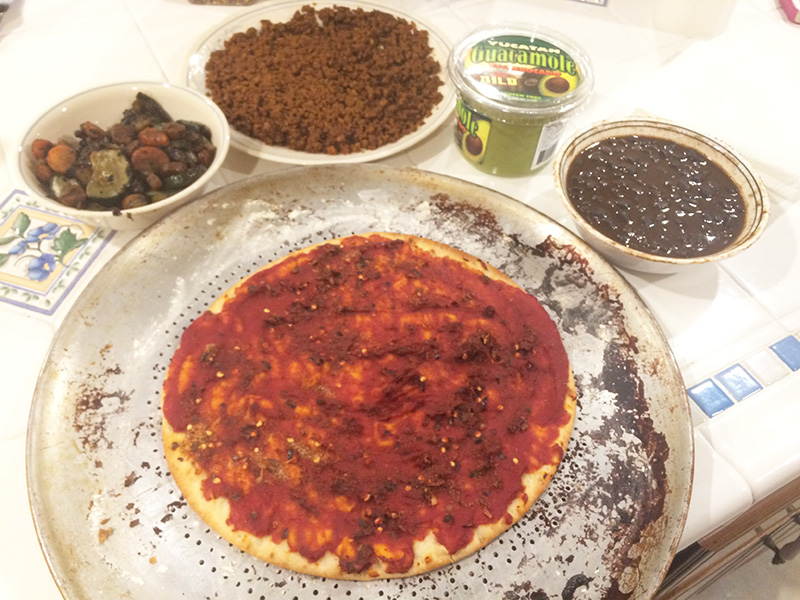 Assembling the taco pizza took some time and a lot of effort. It ain't easy fitting 13 tacos on a small pizza. Yes, I said 13 tacos.

At first I sort of just let the tacos lay flat on the pizza as I moved on from one to the other, but then I realized I could keep them together by connecting the two sides of the tortilla with a toothpick. I'm a genius, I know.

Once I had all the tacos on the pizza, I finished the dish by adding a heaping amount of guacamole to the center and drizzling some hot sauce over it. I added some hot sauce to each taco, too, because I like to keep things spicy. 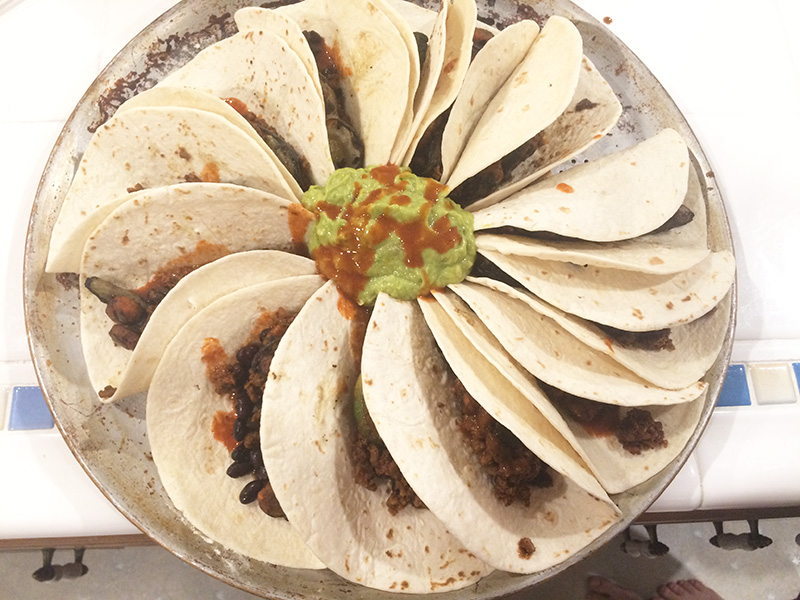 (Get in my belly)

When it was time to devour this meal, I had a hard time cutting the pizza crust. It was a little too crispy, but let the record show that it wasn't burnt.

Using my limited muscle power, I was finally able to cut through the crust and eat a slice.

Oh. My. God. It was honestly one of the best things I've ever eaten. I don't think any other dish will ever compare to the taco pizza.

My younger sister's friends helped me finish most of this guy off, so I didn't look like the ultimate pig consuming the whole pie on my own. 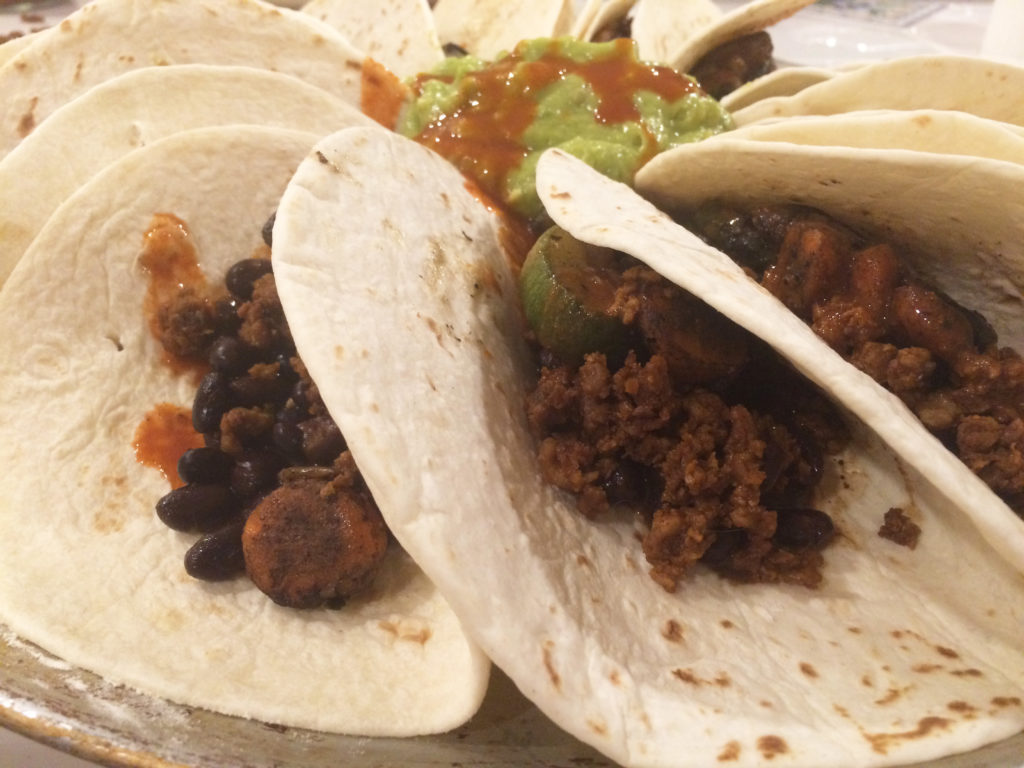 (Heaven is a place on earth with you)

They all agreed that it was absolutely delicious, but some said it was a bit too spicy. I mean if you can't handle the heat, stay out of the kitchen, amirite?!

I may have made this dish to celebrate Cinco de Mayo, but you can bet I'll be recreating this masterpiece almost every day for the rest of my life. Okay, maybe not every day, but I'll be making it often.

It was quick and easy to make, not to mention cheap. I think I spent a grand total of $22 on all the ingredients. Not too shabby.

If you're not up for all of this cooking for your Cinco de Mayo party, try making one of THESE festive dips instead.