Tallia Storm is a 15-year-old soul singer from Scotland who has taken both the music and fashion worlds by storm! 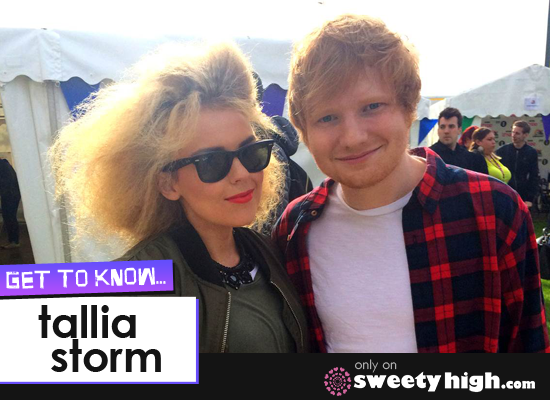 We recently caught up with Tallia to discuss her new record deal with Virgin Records, plus style, music and much much more!

We first interviewed Tallia in-studio in April of 2013. We asked her what she had been up to since then.

"My life has literally been crazy," Tallia said. "I've been to loads of fashion weeks in London and Madrid, I've been working like a mad dog in the studio on new tracks and flying back and forth between the U.K. and L.A."

"She does really amazing work for charity and its a wonderful event," Tallia said of Longoria.

She also attended Radio 1's Big Weekend in Glasgow this May, where she met a number incredible bands and artists, including Ed Sheeran.

Most recently, Tallia signed a recording agreement with Virgin Records!

"It's pretty incredible really," Tallia said. "It took quite a while to work the contract out as it was the first time they had signed a minor, non-U.S.A. resident who lived in Scotland. Not bad for a 15-year-old really."

She traveled to the famous Capitol Records building in Hollywood to sign the deal.

"It was surreal," she said. "Looking at pictures of Frank Sinatra and Nat King Cole on the wall, I really had to pinch myself. I really feel truly blessed to have such a great team around me and I'm in this for the long run."

She said that no matter how long it takes to reach her big goals, she plans to keep going strong.

"I don't want to run, I want to do it right, no matter how long it takes, and really stay in the game for a long time," she said. "That's my ambition."

Tallia's big break came after her family had a chance encounter with Elton John while on a vacation in Hawaii. She managed to get a demo CD to him, and before long, he had invited her to perform onstage with him in Glasgow!

"I don't think I will ever forget it," she said. "It really did propel me to another level. My career has been a serious of good luck encounters, for every gig that I performed at brought me another gig, and then another gig and on I climbed, meeting incredible people along the way."

Some of these massive stars include Katy Perry and legendary music producer Nile Rodgers. She attributes a lot of what she has been able to do to his support.

"To be invited to open for Sir Elton John, aged 13 years, will stay with me for life," she said. "That was it. He didn't have to do any more. The credibility of him being so gracious to invite me was enough of a statement to the world."

But now that Tallia's gotten this far, she said that there's no way she will let her success get away from her.

"Sometimes it freaks me out actually, in that I don't want to let him down after giving me such a break," she said. "So I just work harder."

Tallia said that her biggest musical influences came from a combination of jazz legends and Motown, funk and rhythm and blues. Some of her favorite artists include Dinah Washington, Ella Fitzgerald, Dizzy Gillespie and John Coltraine.

"I'm fearless when it comes to fashion," she said. "For me it's a form of free speech. The ability to express your individual identity is pure social reality."

Tallia said that she laughs at articles that analyze her style too closely and ridicule what she's worn.

"People dissect it, which is hysterical, but I just love to have fun with it," she said.

She's also extremely supportive of the young and upcoming fashion designers she meets at design schools and fashion week events.

"I've been continuing to support up-and-coming fashion designers like Joseph Singh, Josh Tafoya and Francine Frolich from Parsons School of Design in New York," Tallia said. "And there are some great new designers I've been supporting who are in the Scottish Fashion Awards."

She's a particularly big fan of Barbra Kolasinski, a designer from London College of Fashion.

"The amount of talent these guys have is insane and I feel its important that we support each our in our journey for success," she said. "I love to be quirky and edgy but with a sense of fun. If I could wear couture to the supermarket every day I absolutely would!"

Along with a fashion-centric campaign, Tallia has a few massive projects in store for her fans.

"This summer I'm working on more material with some exciting producers, doing lots of gigs and a really cool new fashion campaign, but you'll have to wait for that one," Tallia said. "I shoot it in London next week and I'm so excited!"

She was quick to add that she is extremely thankful for the help of her family including her parents, her sister/sylist Tessie and her brothers Johnnie and Zac.

"These guys keep me grounded and I feel truly blessed to be doing what I'm doing," she said. "But like I have said before, I believe everyone has 'their thing.' It's up to you to find it, harness it and work it, so go do it!"

For even more on Tallia Storm, be sure to follow her on her social media channels below and check out our previous interview with her here! You can also share all of your favorite fashion news with us at SweetyHigh.com!