America's Got Talent Contestant Grace VanderWaal on Being Compared to Taylor Swift: I Felt 'Honored'!

We hope by now you've all witnessed 12-year-old Grace VanderWaal's incredible audition for America's Got Talent. On the off-chance you haven't, you're going to want to click the play button on the video below immediately.

Immediately after we saw her powerful performance, we chatted with Grace about being compared to Taylor Swift, her favorite song she's ever written and why you shouldn't be afraid to just be yourself.

Sweety High: How did you feel when Simon Cowell called you "the next Taylor Swift"?

Grace VanderWaal: Just so, so grateful. The only word I can think of is "honored." That's one of the nicest things he could say to someone.

SH: Do you look up to Taylor as an inspiration in any way?

GV: What inspires me is that everyone knows who she is. I'll hopefully be, one day, as successful as that!

SH: What's your favorite song of hers?

GV: "Our Song." I used to be obsessed with her in her country days.

SH: How would you describe your own musical style?

GV: That's a hard question, because I like a lot of different genres. I kind of explain it like alternative, indie, ukulele, rock, pop just mashed up into one.

SH: What was the first song you ever wrote about?

GV: It was about being happy, because for some reason back then, I was really bad at writing happy songs.

SH: Do you have a favorite song you've ever written?

GV: "I'll Hold Your Hand," because I wrote it for my sister. She started crying. 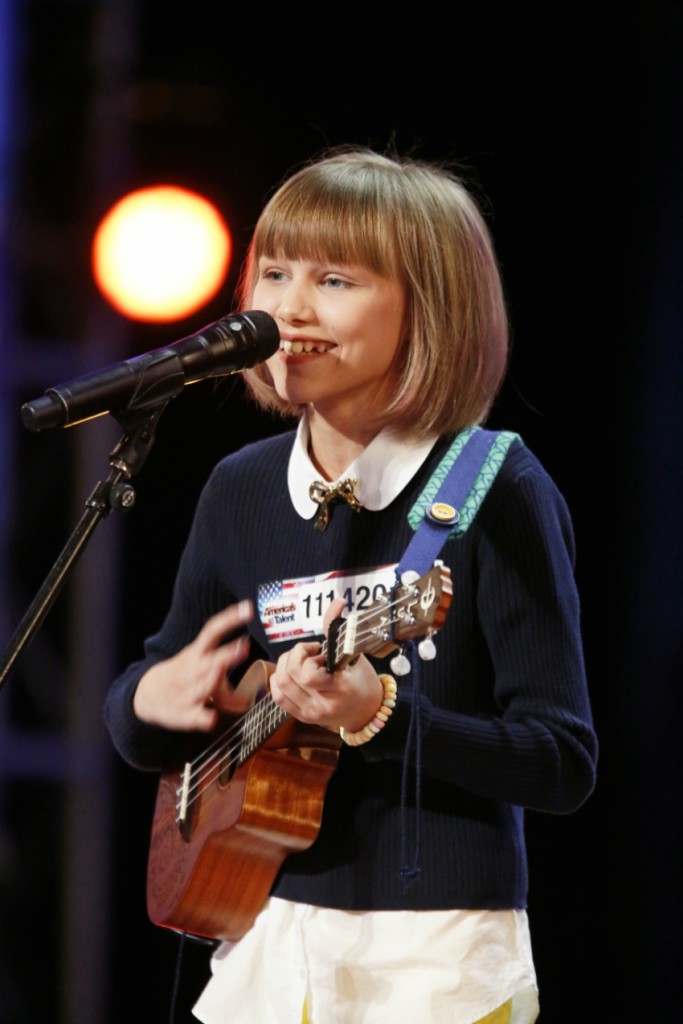 SH: In the original song you sang for your AGT audition, there's a lyric that says "I'm just trying to find my way." How do you think this show is going to help you find your way in the music industry?

GV: It's all about helping me on my career path. I think the [live shows] can make my dreams come true and make that line a reality for me.

SH: Your audition song is also incredibly empowering. What inspired you to write it?

GV: I was looking at this old Instagram account I used to have. I was a totally different person. Seeing how much I've changed was really my inspiration for the entire song.

SH: What's your advice for people who are afraid of changing or afraid of expressing who they really are with the world?

GV: Stay true to yourself. Everyone says "Don't care what people think," but it's so much easier said than done. But there'll be a moment in your life where you'll just be happy with yourself and you won't hear that voice at all. After all this, I don't know why, but I don't hear that voice anymore and I'm such a happier person.

SH: When did that moment of clarity happen for you specifically?

GV: One morning I was putting on makeup. I really wanted to feel special. I couldn't help but think everyone at school was going to be like "Are you wearing makeup"?! I was just like "You know what, I don't even care" and I just did it. No one at school ended up really caring and since they didn't care, I didn't either!

SH: What's your advice for girls your age who want to sing or perform in any sort of way?

GV: Your time will come and when it does, just give your all because that may be your own chance.

Grace isn't the only artist serving up some much needed advice. See what country artist Tegan Marie's band had to say to all you aspiring musicians itching to start your own band HERE.