In case you haven't heard, Taylor Swift's Reputation pop-up shop officially made it to the west coast.

In partnership with AT&T and named after her Taylor Swift NOW series on DirecTV, the pop-up shop first appeared in New York City a few days after the release of the Reputation album. After the overwhelming success of the shop in NYC, Taylor decided to bring the thrilling experience to Los Angeles—and we couldn't wait to get inside!

Haven't made it there, yourself? We've got you covered! Keep scrolling for a peek into everything we saw in the Taylor Swift NOW pop-up shop in L.A. 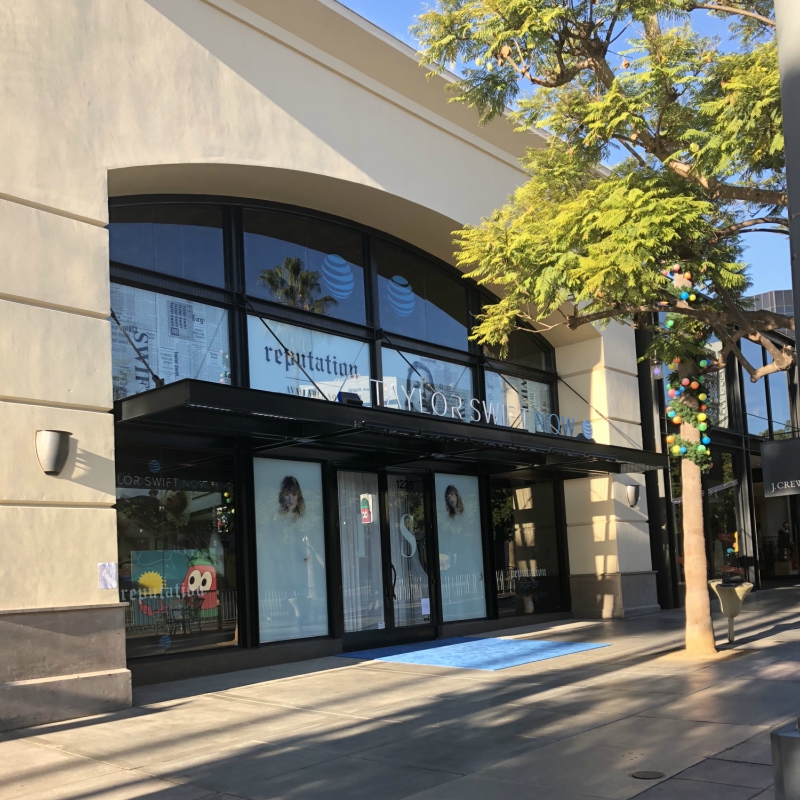 Located on the 3rd Street Promenade in Santa Monica, California, the Taylor Swift NOW shop opened on Dec. 12. With only five days to enjoy the unique experience, it's understandable that fans were lining up early to get inside. Some dedicated Swifties even arrived at 8p.m. the night before, and spent the evening in line before the opening day.

In celebration of Taylor's 28th birthday, we made our way to the shop on Dec. 13. No surprise, but when we got there, fans were decked out in their Reputation merch and beyond excited to take a step into Taylor's world for a day.

In typical Swiftie fashion, the fans waiting in line quickly bonded over their massive love for the star. Discussions of her birthday plans, her social media activity and her new music easily passed the time while we waited for the shop to open. One devoted fan even brought a box filled with homemade cookies with a laminated Reputation tag to share with her fellow Swifties. 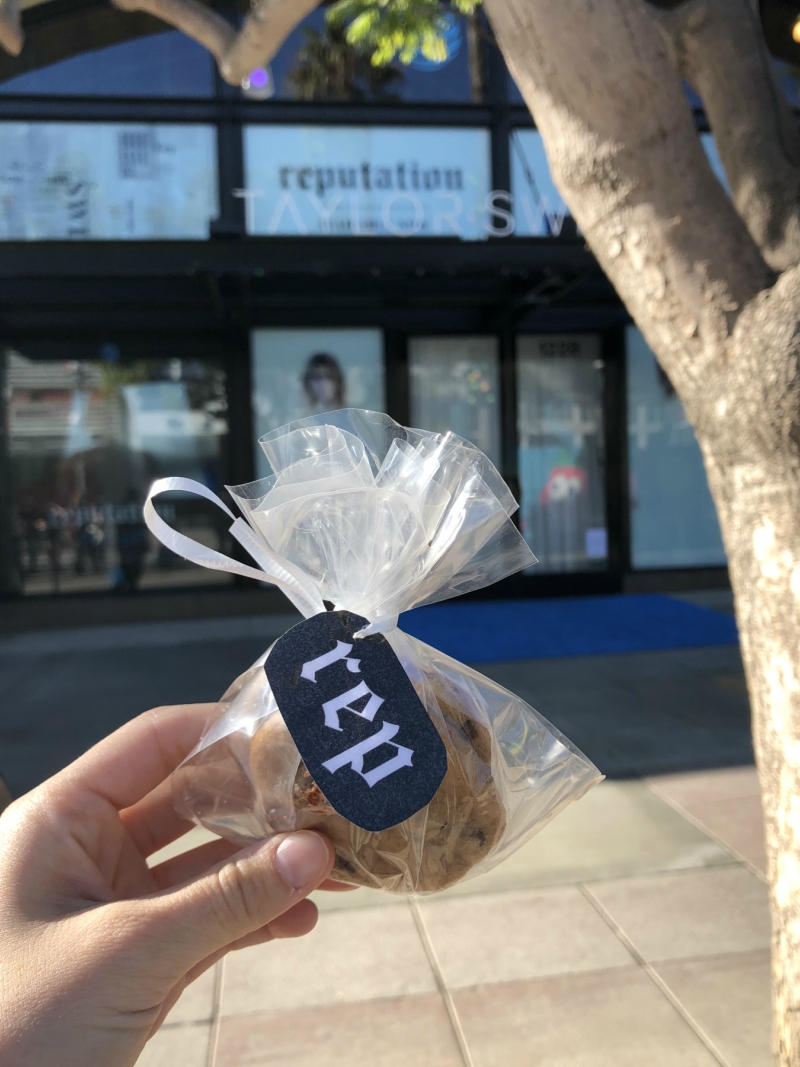 The excitement of the crowd was nearly palpable, and when the doors finally opened at 11 a.m., none of us were disappointed.

Stepping into the shop was almost like taking a stroll through the making of the "Look What You Made Me Do" video. On one side there was a  stunning replica of the birdcage and swing that Taylor used in the masterpiece. Although it was only 1/3 of the size, the handles of the swing were the authentic handles that Taylor gripped as she swung back and forth. On the other side was a replica of the throne she sat in, sipping her tea and clapping back at the haters. 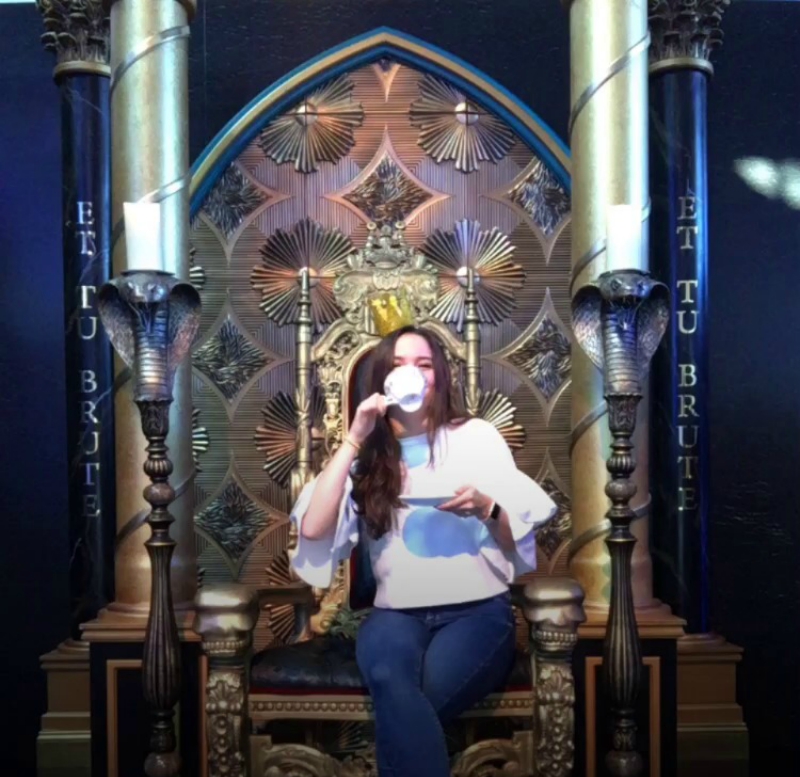 The walls were filled with artwork, including pictures of Taylor and similar newspaper designs to those used on the Reputation album. There were also TVs scattered throughout the shop playing behind-the-scenes footage of the making of "LWYMMD." Although there was no sound, you could see Taylor laughing and genuinely enjoying herself as she put together her video.

Our favorite part, however, was the various cases displaying all of the outfits that Taylor wore in her famous video. From the graveyard dress and zombie mask, to the stunning red gown that she wore on the throne, to the strappy black leather number with red thigh-high boots, all of Taylor's show-stopping outfits were on display as we walked through the shop. 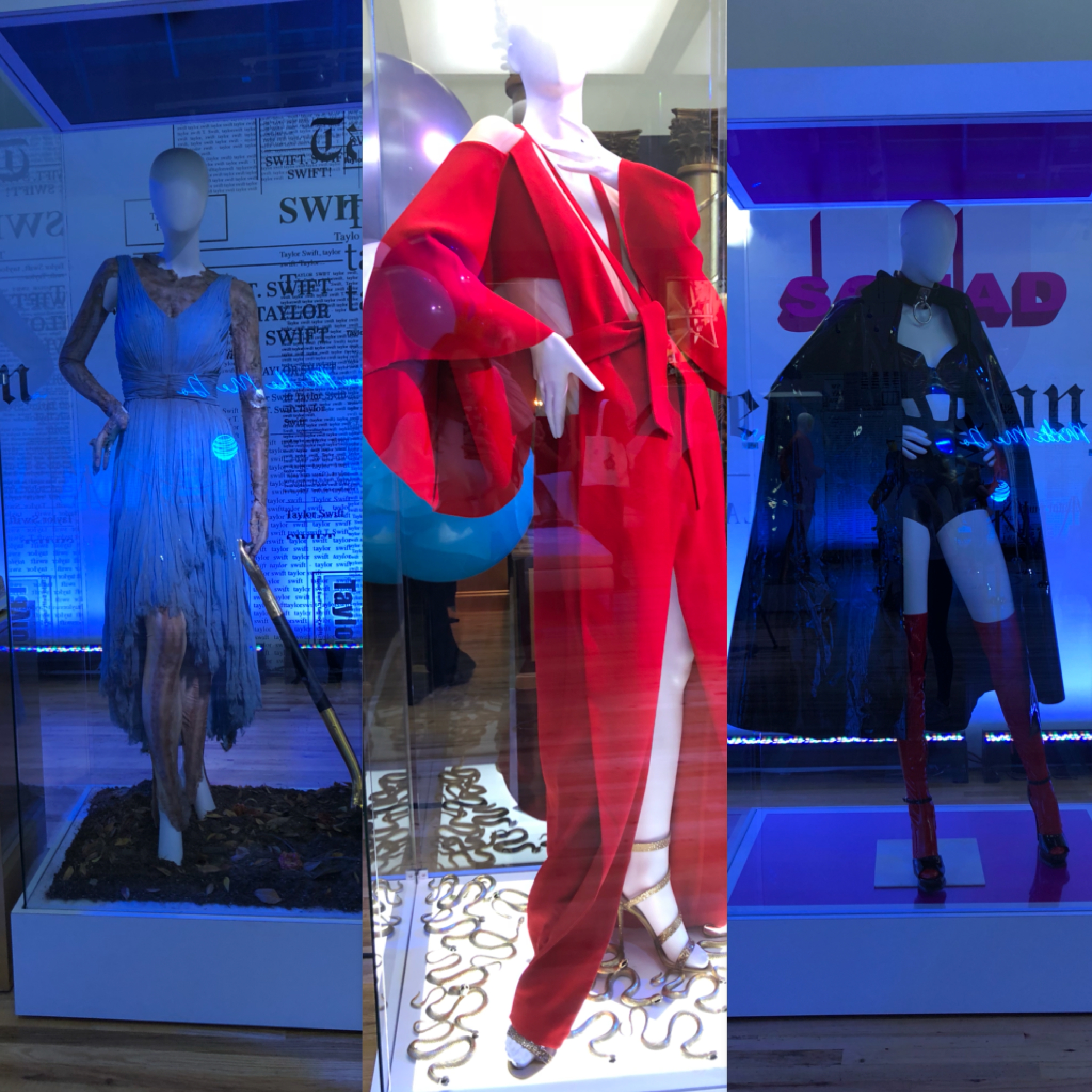 While some fans were quickly distracted by the various photo opportunities, others immediately headed to the back of the store, which was filled with Reputation merchandise. In line with the "LWYMMD" theme, the mannequins displaying the merchandise were topped with cat heads to match the bank robbers in the video.

Although you may have expected the merchandise area to be totally out of hand, it was kept clean with one simple trick—personal shoppers! Every fan was handed a numbered card at the door, and if they wanted a specific piece of merchandise, they simply had to hand their card to a personal shopper and voila! the desired merch was brought directly to them. Talk about the star treatment, amirite?

The available merchandise included a variety of Reputation sweatshirts and T-shirts, as well as snake rings, PopSockets and iPhone cases. Fans seemed to veer towards the sweatshirts, with a special emphasis on the ripped-arm crop top version. 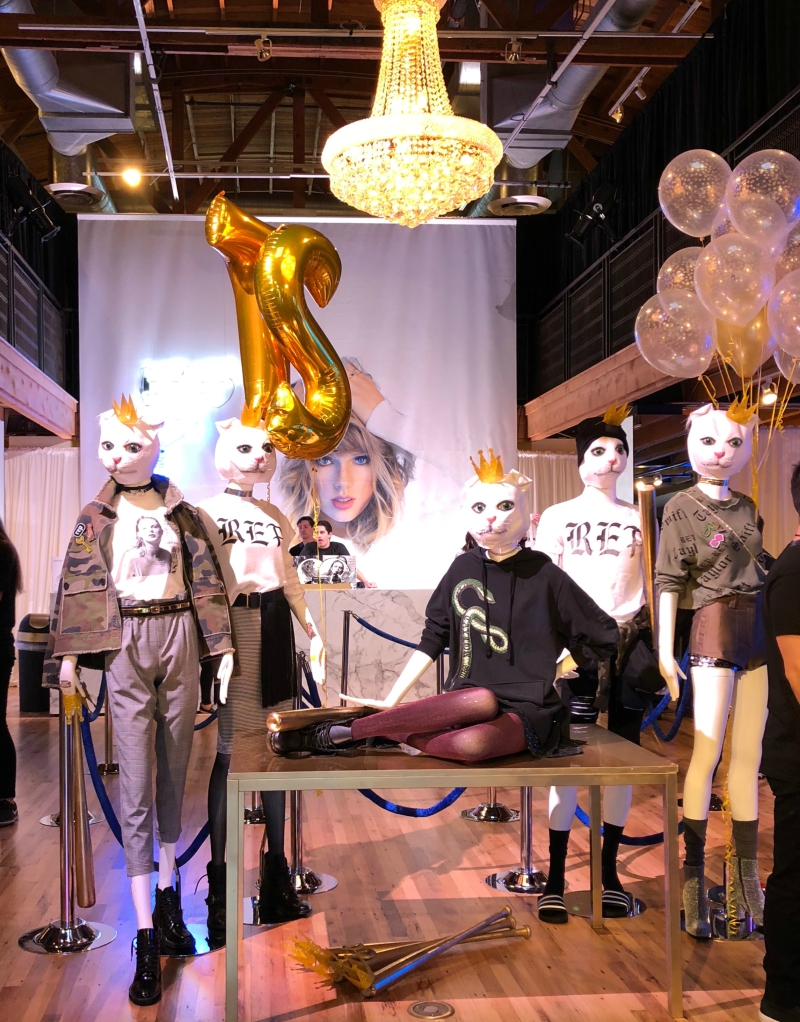 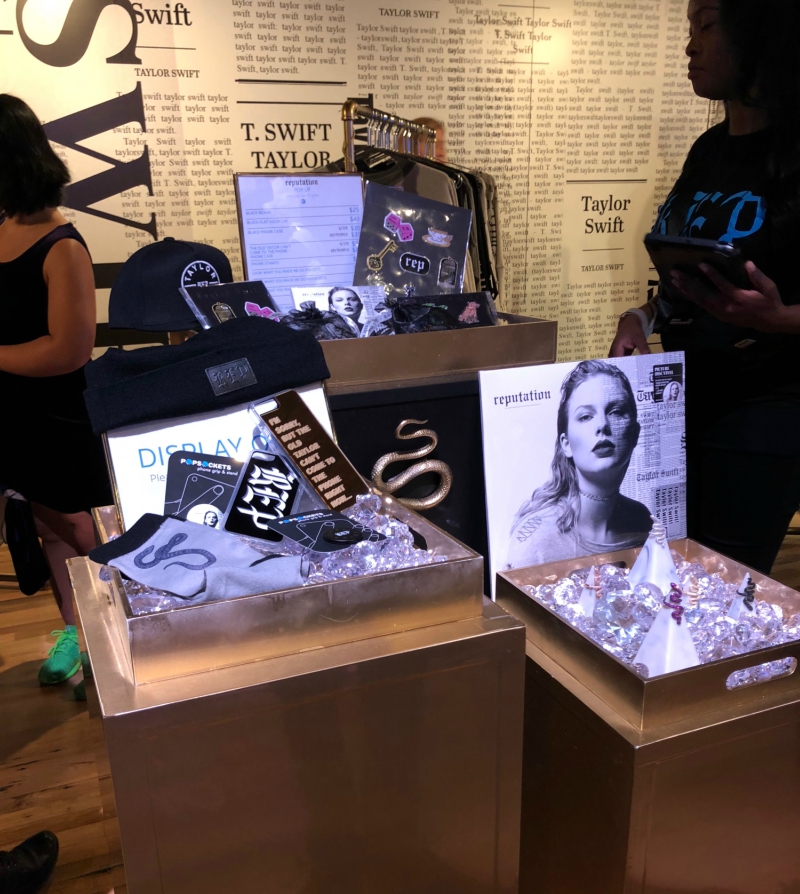 The shop is open until Dec. 16, and it's definitely worth the wait in line—even if you're only going for the photo-ops. 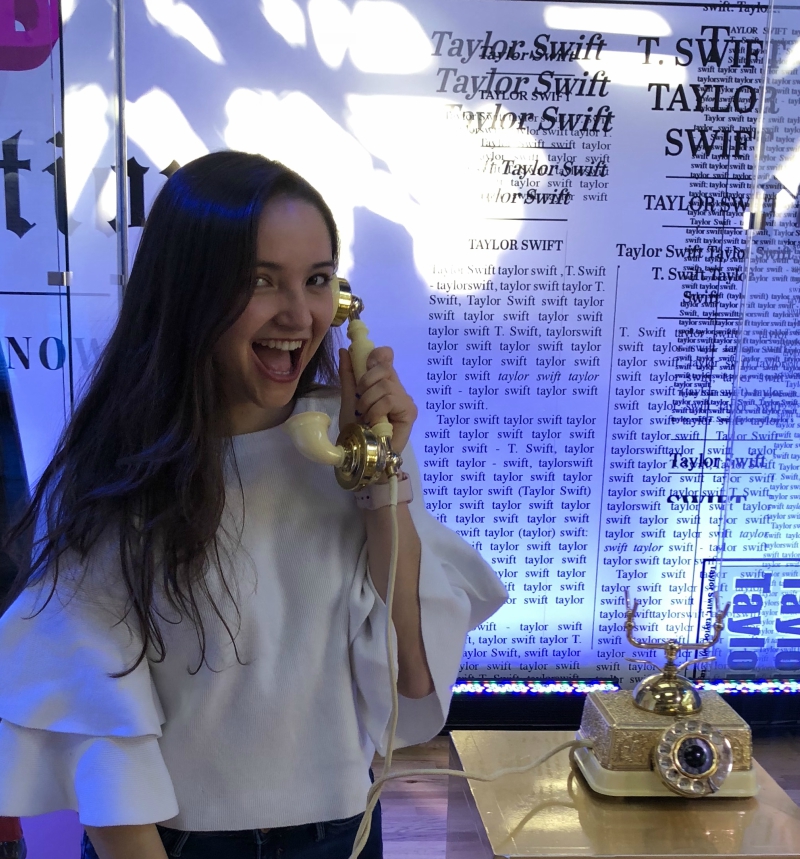 Sorry if we can't come to the phone for a few days, we're just recovering from our Taylor Swift pop-up shop experience.

Do you love Reputation as much as we do? Then click HERE to see our top five song picks from the album.