Temara Melek is a 15-year-old singer-songwriter originally from Colorado whose musical talents have allowed her to open for Demi Lovato and film a video alongside the stars of Pretty Little Liars! 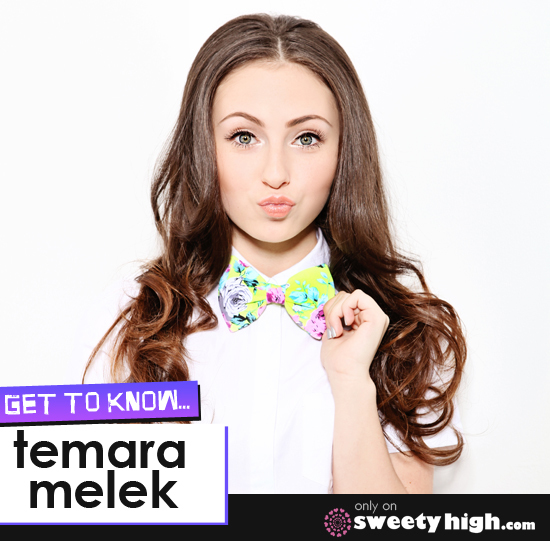 We recently spoke with the artist about her biggest achievements, inspirations and the next big move in her career!

Temara Melek has been singing for as long as she can remember, participating in pageants and small performances from the time she was little.

Four years ago, when Temara was 13, she moved to California and started working with a vocal coach.

"That's when I started writing my own music and decided that's what I wanted to do as a career," she said.

Temara is best known for her single "Karma's Not Pretty," which she said may or may not have been based on a real life experience.

"The song is about how I had this great boyfriend, but then he decided to flirt with my best friend," she explained. "I move on to this great guy who I really like, and he misses out."

She told us she wrote the song as a kind of karmic warning.

"I just want people to know what goes around come around," she said. "Karma is not a good thing and it is real, so be careful what you do!"

"It was an amazing experience," she said. "I was huge a fan of them, and when I finally met them on set they were both really nice guys and we had a lot of fun filming."

Temara cited powerful women in pop as some of her musical inspirations.

"My biggest music influence is probably Miley Cyrus, I am a huge fan of her," Temara said. "I just saw her in concert and she is one of my favorite artists. Taylor Swift is also an amazing singer and I love how she writes all her music from personal experiences."

She is also a big fan of Demi Lovato, and even got to open up for her last year in October as a part of the Neon Lights Experience tour!

"That experience was amazing," she said. "It was definitely the biggest performance I've ever done, and being able to share the stage with Demi Lovato was awesome. I was very nervous, but it was a really cool experience."

Some media outlets have even taken to called Temara Melek the "teen Katy Perry."

"That's really crazy," Temara commented on the nickname. "I'm a huge fan of Katy Perry, so it's really weird when I hear that, but it makes me really excited because I would definitely love to have a career like her someday."

Currently, Temara is in Nashville recording with her producer. She plans to release an album later this year, but will also have a new single and music video out late this spring!

We really can't wait to hear what Temara Melek will release next! To keep up with all of the latest updates, follow her social channels below, and become a part of our community at SweetyHigh.com!