The Lovato Project's Founders Speak Out!

Sarah Ducrocq and Carla Migliore are the founders of The Lovato Project, an organization based out of France that raises money for Free the Children in honor of Demi Lovato! 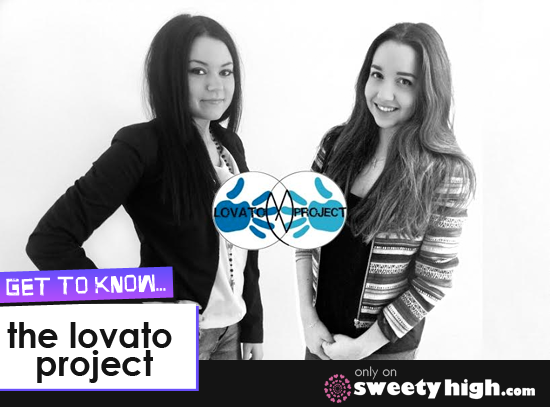 In a recent interview we spoke with the duo about how they got involved with such an awesome cause, and about their hard work and the future of The Lovato Project!

In February of 2013, Sarah Ducrocq was chosen on Twitter by Demi Lovato's aunt, Kerissa Dunn, to design a logo for the Demi Lovato Charity Boutique. The boutique auctions pieces of Demi's wardrobe to raise money for various charities, including Free The Children!

"They were asking if fans would like to design the logo, so I proposed mine," Sarah explained. "She sent me a private message saying she loved mine and we started exchanging emails."

Before getting involved with the boutique, Sarah knew about Demi's participation in We Day events to benefit Free The Children. Her involvement with the boutique's design taught her about the organization's importance.

"I started to get really interested and involved when the boutique opened," she said.

Free The Children is a charity that works around the globe to empower children, allowing them to reach their full potential and put change in place.

Sarah founded The Lovato Project France with fellow French Lovatic Carla Migliore in May of 2013. Both had been fans of Demi since 2008, and wanted to support Free The Children in her honor.

"We are very enthusiastic and proud to be leading a project that will help families and children who are in desperate need of many things we take for granted every day such as clean water and an education," they explained. "We are keenly aware that many of us have everything we need to survive yet there are others who have nothing, yet they still manage a smile of hope and appreciation."

To raise money, The Lovato Project has raised money through Lovatic meet ups in Paris and asking for donations via Twitter. The platform has been great for for spreading the word and getting people interesting in The Lovato Project.

So far, it has raised more than a thousand dollars and reached their initial goal!

The milestone recently attracted the attention of Demi Lovato, as well of her mom and aunt, who have posted about The Lovato Project to spread the word about the cause.

"This is huge for us!" Carla said. "We're so grateful for their help and support and we're glad that they are excited and happy about it! Everything that happened and is going to happen is, for sure, more than what we could've ever dreamed of! We really hope they are all proud of us."

Sarah said that she and Carla are incredibly proud of everything they've been able to accomplish and how far they have come.

It is in honor not just that Demi knows about the cause, but that they have raised so much money for Free The Children, Sarah added.

"This whole experience is just amazing!" she said.

Sarah and Carla are now working toward making the project a worldwide charity movement, with members from countries around the world. They also plan to work even more closely with Free The Children, and to raise even more money to benefit the cause.

They would also like to help the charity in person someday.

"It has always been a dream of ours to go on a charity trip to Africa to help them," Sarah said.

It's amazing what they've been able to accomplish through their hard work!

"We just wanted to thank Kerissa and Dianna for their support," they said. "We wouldn't be here without their help, and also everyone that helped us in any way by making a donation or just by supporting us and believing in this project."

For more info on The Lovato Project, check out their official pages below! Be sure to join our community at SweetyHigh.com and tell us about the causes that you are most passionate about!