Ashley Poston's Geekerella completely stole my heart when I read it two years ago.

The novel tells the story of a girl named Elle, a fangirl with a major passion for a sci-fi series called Starfield, and a boy named Darien, the heartthrob star of the new Starfield movie—and the object of the entire Starfield fandom's online wrath. Through a phone number mixup, the two accidentally become friends and eventually fall in love via a series of text messages, despite the fact that learning the other's true identity could send everything crashing down in an instant. Add to that an epic sci-fi convention ball and one truly wicked stepmother, and you've got an incredible retelling of the timeless Cinderella tale.

As soon as I heard that Geekerella was getting a companion novel, I knew it'd be a must-read as well. The upcoming book, which hits store shelves on Apr. 2, 2019, is called The Princess and the Fangirl, and its publishers at Quirk Books were kind enough to send me a review copy before its release. I haven't been disappointed. 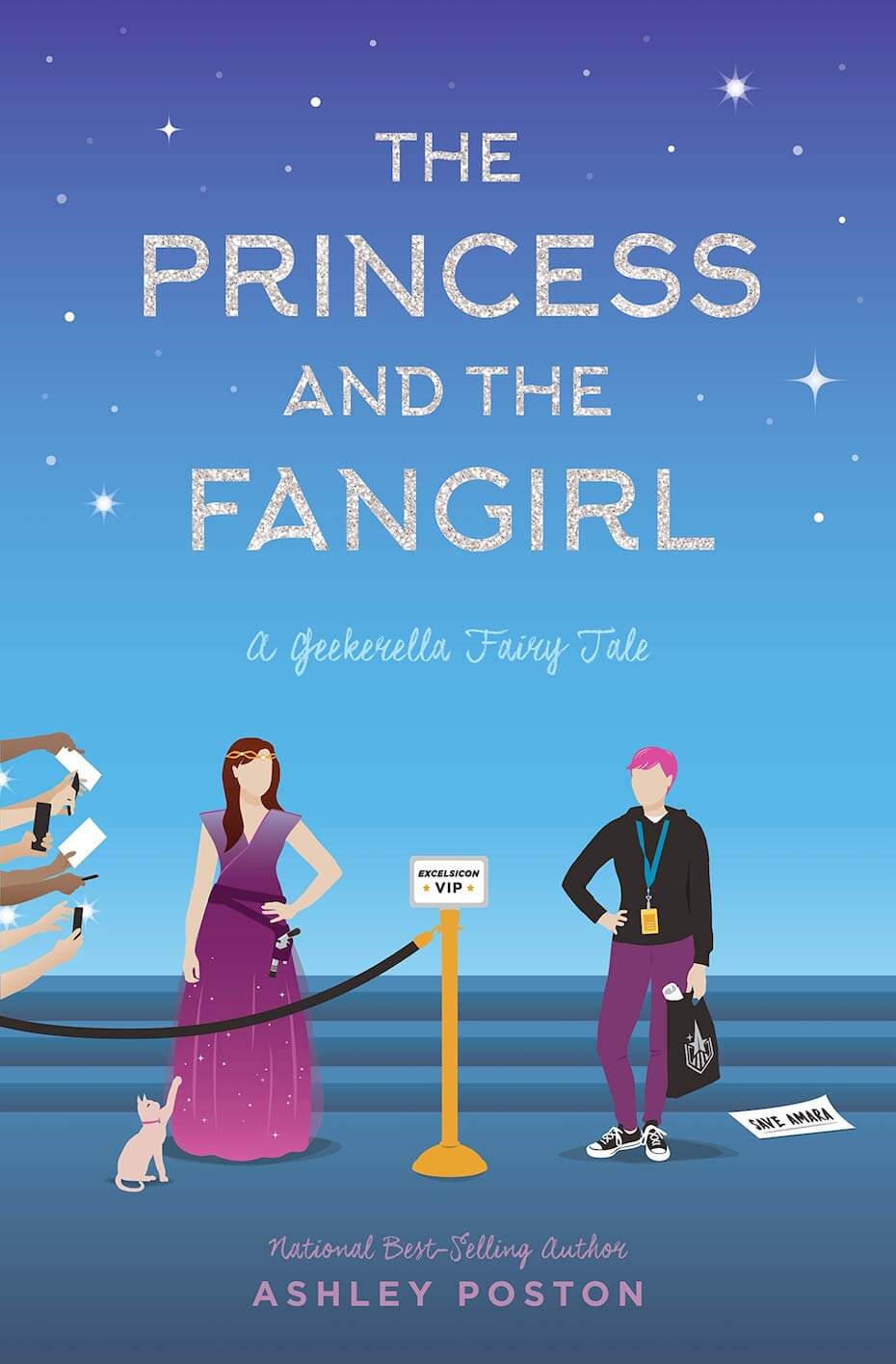 (The Princess and the Fangirl via Quirk Books)

Though The Princess and the Fangirl focuses on a (mostly) new set of characters, the fictional Starfield series is just as central to this novel as it was in Geekerella. Starfield lies somewhere between Star Wars and Star Trek, with a powerful space romance at its core, and while its fans are devoted, they can also be a bit possessive about the series.

No one knows that better than Jessica Stone. Even though she has an Oscar nomination under her belt, she's become infamous, due to her role as Princess Amara in the new Starfield reboot movie. For the most part, the show's devotees are none too happy with her performance—or her in general. She deals with constant online bullying from "fans," and it doesn't help that she never cared much about the role in the first place. She's actually grateful that her character died in the movie, and that after this ExcelsiCon Starfield convention, she might finally be able to move on and rebuild her career.

Imogen Lovelace, on the other hand, is the opposite of done with Princess Amara. She's worked all her life to feel anything but ordinary, and she feels like she might finally be achieving something with her big new campaign to do Princess Amara justice by saving her life and bringing her back to the big screen. ExcelsiCon might be her one opportunity to actually get her message to the folks behind Starfield, and she's not going to squander it for anything.

Of course, it's not long before the fates of these two young women intertwine. That's because—though Imogen has shortly cropped pink hair and Jess has long, brunette locks—they happen to be nearly identical. When Jess is late to a panel, Imogen accidentally gets dragged up onto the stage in her place. Imogen quickly rises to the occasion to play the part, and the fans are left feeling like Jess Stone is more relatable than ever, but Imogen is not pleased.

In fact, Imogen fears that Jess might have the pull to ban her from ExcelsiCon forever, and she nearly does. But when someone starts leaking the next Starfield script—the one Jess carelessly discarded—Jess realizes it might be the end of her career, and she'll only have time to track down the perp if Imogen will swap places with her while she looks.

Jess doesn't let Imogen in on exactly why she's asking for the switch, but Imogen agrees, if only because Jessica Stone would be the perfect mouthpiece for saving Amara. Of course, that's the last thing Jess would want. But trading places is harder than either of them expected, particularly with Imogen's entire family and Jess's fellow castmates in attendance at the convention. It doesn't help that Imogen becomes entirely smitten with Jess's straight-laced assistant, Ethan, and that Jess develops undeniable chemistry with Imogen's online friend, Harper. Neither can get what they want without sacrificing the other's happiness, and if they're not careful, they might both fail before the con is done. What results is an entirely new take on The Prince and the Pauper, with the power of fandom at its center.

The Princess and the Fangirl manages to take the already powerful Geekerella and build upon it in a way that makes its universe seem completely real, no matter how outlandish or unlikely some of the events in the book might be. Like Geekerella before it, the story is told in the first person from two opposing perspectives, with Imogen and Jess taking turns revealing the novel's events from their own unique points of view. Of course, they're both biased in their own ways, but this also gives us insights into their characters and what they truly think and feel.

These two viewpoints allow the story to really shine. While the book is all about gaining confidence and being your authentic self, I particularly appreciate the way it addresses toxic fandom. Because we see the story from two totally different perspectives, we see how harmful fan feelings of superiority and entitlement can be, not only to the creators being torn down, but also to the fans engaging with the discourse.

These themes were present in Geekerella, but they're even more critical to the story here. In that first novel, it quickly became clear that Darien Freeman was a lifelong Starfield fan playing out his dream by starring in the movie, and that all of the claims of fake fandom were coming from a place of ignorance. As readers, we sympathize with him immediately because he's earnest and trying his best.

But his co-star Jessica Stone is different. She's almost a minor antagonist in that book, and when her chapters open in The Princess and the Fangirl, she's hard to like. It quickly becomes clear that not only does she not care about Starfield, but that she'll do everything in her power to distance herself from it, and she doesn't have much respect for ExcelsiCon or its legion of fans.

Of course, as the story progresses we come to understand why she holds Starfield and its fans in such low regard—because they've always treated her like garbage. And while she acts high and mighty at first, she's always learning and ever-changing, and it's not long before we're rooting for her to exact justice and to find love just like we would with any other great character. She earns that right, and it's a powerful thing.

Though Imogen is likable from the start, it can be troubling to see how little she thinks and expects of herself. She's just as eager as the other Starfield enthusiasts to discredit Jessica Stone, particularly because her goals don't align with Imogen's desire for Amara to be resurrected. But her campaign also flies in the face of the other fans. Her goal is to prove that Amara is more than anyone suspects of her, even if some of the diehard fans don't necessarily believe it.

The story urges us to form our own opinions, latching on to positives of fandom, like comradery and inspiration, and being skeptical of gatekeeping. There's more to every story than we know, and just because something doesn't exactly resemble the version that you know and love doesn't mean that it's not going to offer something special and new.

While I'm sure I would have enjoyed The Princess and the Fangirl without reading Geekerella first, I think the context and world-building helped make this story feel even more special. There are even little cameos from Elle and Darien that have a significant emotional weight when you really know those characters and what makes them tick.

And with Jessica Stone's incredible growth into a wonderful character, I'm hoping this book is only the second in a long line of stories revolving around Starfield and ExcelsiCon because these passionately geeky stories are worth telling. The Princess and the Fangirl introduces a massively jerky hunk called Vance Reigns. Maybe he'll get his own strangely relatable story next?

For an inside look into how these stories were written, click HERE to read my interview with Geekerella author Ashley Poston.

ashley postonbooksgeekerellareviewthe princess and the fangirl