I've probably written this here a dozen times before, but the Nintendo Switch is the perfect console for playing ports of the critically acclaimed games you've neglected in the past.

Most recently, I finally took the time to dig into Fireproof Games' The Room. The title started its life as an iPad game in 2012 and was so popular that it branched out to different platforms and spawned three sequels—though I never got around to playing any of them. That's why I was thrilled when I heard that the first game was being released on the Switch, and that they'd be willing to send me a review code so I could experience the game at long last.

From the opening moments of the game, the tone is immediately clear. The entire game takes place within a dark room with nothing but a wardrobe-sized puzzle contraption at its center. The music and sound effects are suitably chilling and eerie, and it appears the only way out is by making your way deeper and deeper into the box by solving a series of puzzles.

Finding solutions is all about working with what you have. You can swipe to twist the box around and see it from different angles, and if you see something that seems important, you can select that area to zoom in and examine it. For example, in the first room, you'll find a couple of books, an open envelope and another strange container on the roof of the box. By pulling the letter out of the envelope and reading it, you can discover more about what the box is, and why you're here.

It turns out you've been left a series of mysterious notes and letters from an associate who entrusted you with getting to the bottom of this bizarre conundrum. It's actually a devious safe that was devised to prevent the immense power hidden within it from getting into the room hands, and the author of the letters seems to think only you have the brains to get at it.

Each of the puzzles is really about gathering and deciphering clues, making note of locked areas and ideating how they might be opened, and combining everything you know to make small bits of progress toward opening the box. 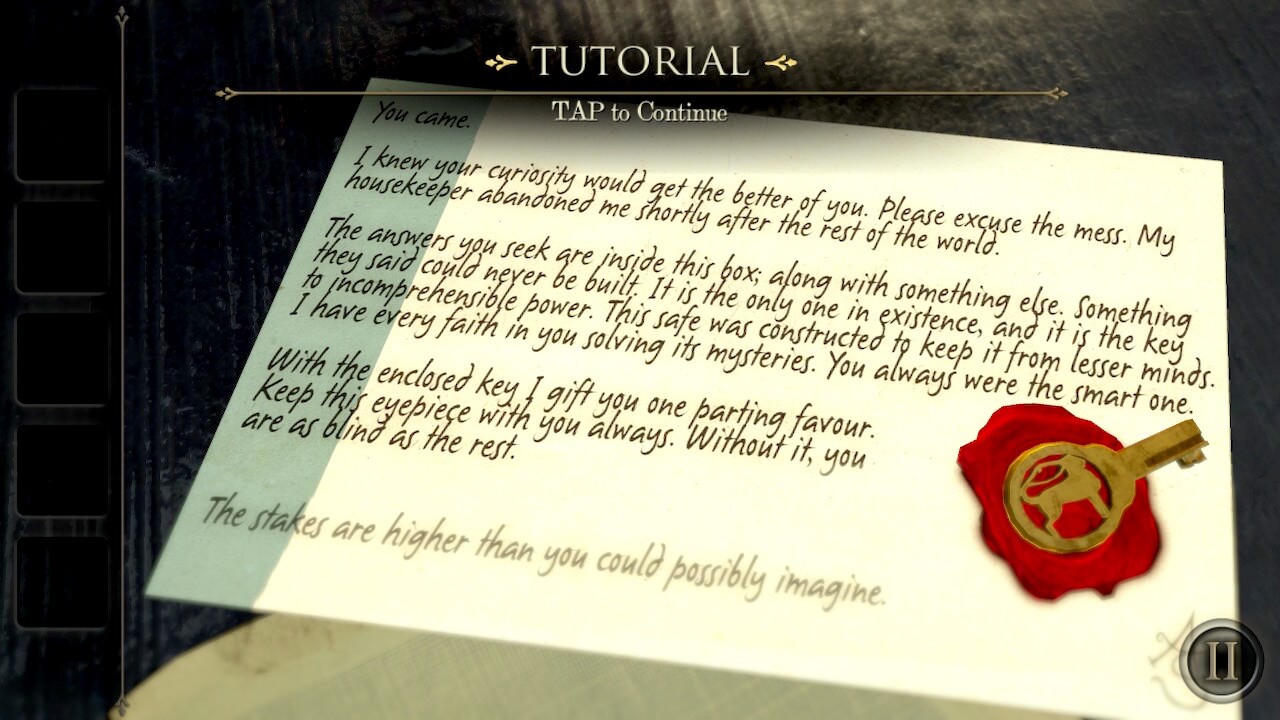 For example, in the tutorial level, a small note reads: "Feed me and I shall survive, Give me drink and I shall die." Out of context, the note makes little sense, but if you've already examined the feet of the wardrobe, you might have seen that they each bear elemental symbols representing earth, fire, water and air. Using a little logic, you might realize that the riddle refers to fire, and by inspecting the fire symbol, you might realize it's actually a button before pressing it to reveal a strange key, allowing you to open set another area on the box. 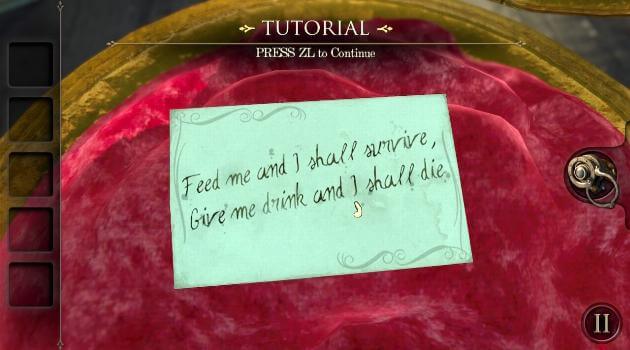 Keeping track of your inventory and knowing which items to use and when to use them, is critical. Sometimes, you can even examine objects and manipulate them to suit different needs at different points within the same puzzle. But of all of the items at your disposal, the eyepiece may be the most important. By peeking through it, you'll see the world inside the room from an eerie new perspective as it illuminates strange symbols and creepy handprints that may serve as clues toward your next objective. Again and again, you'll see an occult hexagon-like symbol, which typically means you're moving in the right direction. 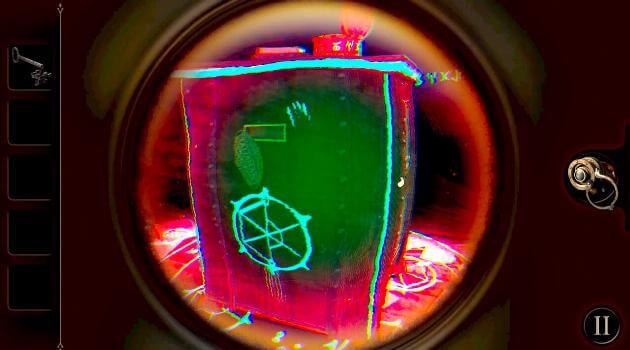 And once you've gotten to the center of one puzzle box, a smaller and even trickier one is usually waiting for you inside of it. The game is split up into different chapters, with each one having the player focus on a different box with its own strange puzzles to solve. 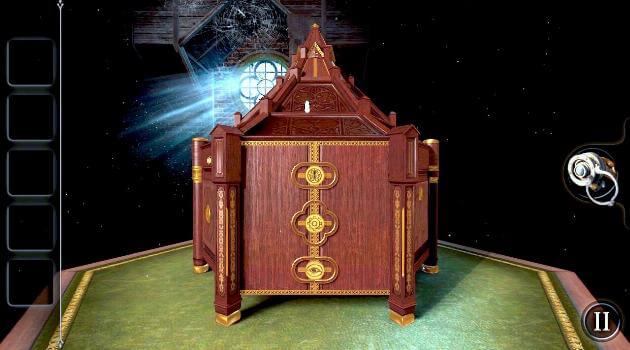 Coming up with unique solutions is the bulk of the game, and thankfully, the different obstacles you must overcome make you feel pretty clever and are fun and satisfying to work out. Occasionally, you might come across a scheme that just doesn't click for you, but the game doesn't make you struggle with it for too long.

The Room never wants you to give up and use brute force to accidentally stumble upon its solution. If a little time has passed since your last advancement, a question mark symbol at the top of the screen will become illuminated, allowing you to read a clue that might push you in the right direction. Some moments will provide a series of clues to help you. While a few of them are in the game simply to get you thinking about the mystery you're unraveling piece by piece, others can make the difference between being totally stumped and an a-ha moment. 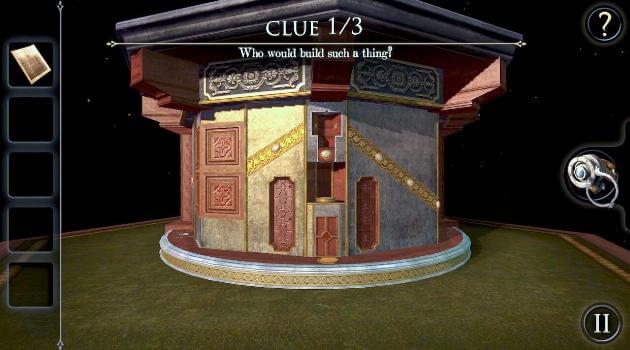 That's only one of the reasons The Room has a lot to offer even if you aren't a master puzzle solver. The game also features stunning graphics—even if I was sometimes so focused on solving puzzles that I didn't have time to appreciate them. Often, figuring out an answer was all about the little details, and this game delivers on them fully. 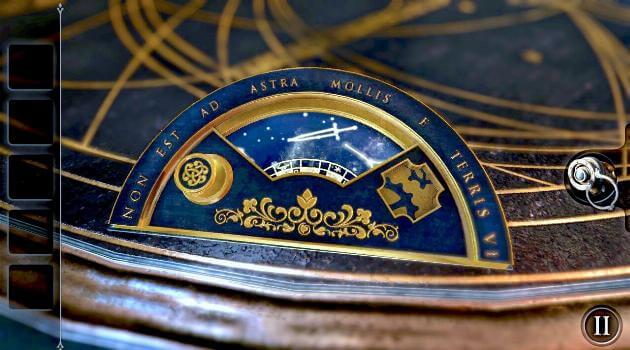 The music and sound effects are also crucial to adding to the game's haunting atmosphere. The opening menu plays a creepy jingle, like you might expect to hear in the playroom of a haunted house. Throughout the game you'll hear haunting hums and the groans of creaky old floorboards, punctuated by shrill sounds and musical stings as you make discoveries and progress through the game. Almost everything you touch will creak open or rattle loudly, not only signifying that something new is happening, but also adding to the scare factor.

Sometimes, you'll even hear spooky whispers in the background, but thankfully there isn't anything too frightening in the game, visually speaking. It all adds up to create a sense of tension and urgency to a game that actually gives you all the time you'd ever need to figure things out.

And since this is the Nintendo Switch, there are actually two quite different ways to play. In the docked mode, you can remove a Joy-Con and point it at the screen to use as a cursor with which you can rotate and inspect different areas of the puzzle and drag items around. While this gets the job done, it can be a bit finicky at times and isn't my recommended way to play. I preferred playing the game in handheld mode, where touch controls made everything a lot simpler and more precise. The controls still weren't always perfect, but they were easier to handle and felt more tactile, which felt exactly right for the game.

If you're even slightly into puzzles, I recommend playing The Room at least once. It'll satisfy your creative side, creep you out and make you feel like a puzzle-solving genius. Though the solution to the game's big conspiracy theory doesn't necessarily deliver on everything that's been set up, it's about the journey, and not the destination.

The Room is available on the Nintendo Switch for $9.99—but if you'd prefer to play it on an Android or iOS device, you can download the classic game for just 99 cents.

The Room made my list of slightly spooky games that are great to play if you can't handle full-on horror. Click HERE for the rest of the list.