The World Next Door Is Part Puzzle, Part Fantasy RPG, and We're Obsessed

I've been eagerly anticipating The World Next Door since I first spotted it last August in one of Nintendo's awesome Nindies showcases, and when it finally dropped last month, I knew I'd have to check it out. 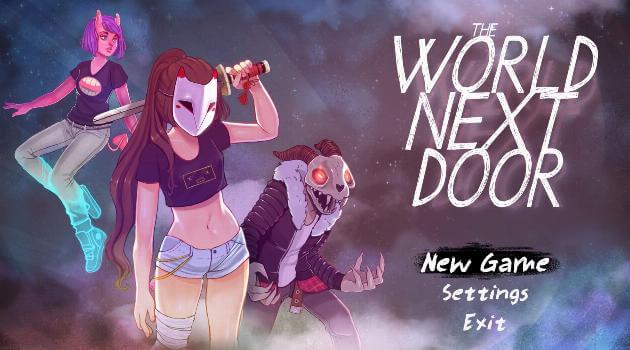 The game was developed by Rose City Games, but it was publisher Viz Media that really caught my attention. They're America's biggest distributor of anime and manga, and The World Next Door is their first foray into games publishing. I reached out to Rose City Games, who generously provided me with a Steam key of the game for review.

The World Next Door revolves around Jun, a teenage human girl who's always dreamed of leaving her world to visit Emrys, the parallel (and magical) world next door. With a little help from the internet, which links the two worlds, she's learned a ton about the Emryns, and even becomes best friends with a sweet but devilish-looking pink girl named Liza.

Once every generation, a portal between earth and Emrys opens up for a single day. While this used to spell war, in recent years the two worlds have learned to live together in peace. Now, each occasion is marked by the Festival, an uproarious event celebrating the blending of two worlds, and lotteries are held to select fortunate travelers to visit the other world for the day. This time around, Jun gets picked and finally gets to meet Liza and become introduced to her world.

It's tradition that humans wear masks during the festival, guarding their souls against the portal while also bestowing good luck, and in her white fox-like mask, Jun blends right in on Emrys. She makes fast friends with Liza's monster-like pals Rainy, Cerisse and Horace before they convince her to break the rules a little and practice some magic in a forbidden shrine before Jun must go back through the portal.

It's here that the game introduces one of its most important concepts. When Jun stands on a set of three touching runes of the same color, I could push a button to cast a powerful magic spell. When the runes weren't touching, I could make Jun pick up a rune from elsewhere and swap the two to create a group of three. At first, this scheme seemed overly simplistic, but I soon learned how it would actually come into play.

Before they know it, the five friends found themselves trapped in the shrine and attacked by an evil guardian spirit called a Grievance. Jun's magical training really came in handy as the floor beneath her became a connect-three game board. I could send her anywhere on the board to activate moves where three matching colors touched, cleverly swapping tiles to create advantageous situations while also dodging the Grievance's attacks. 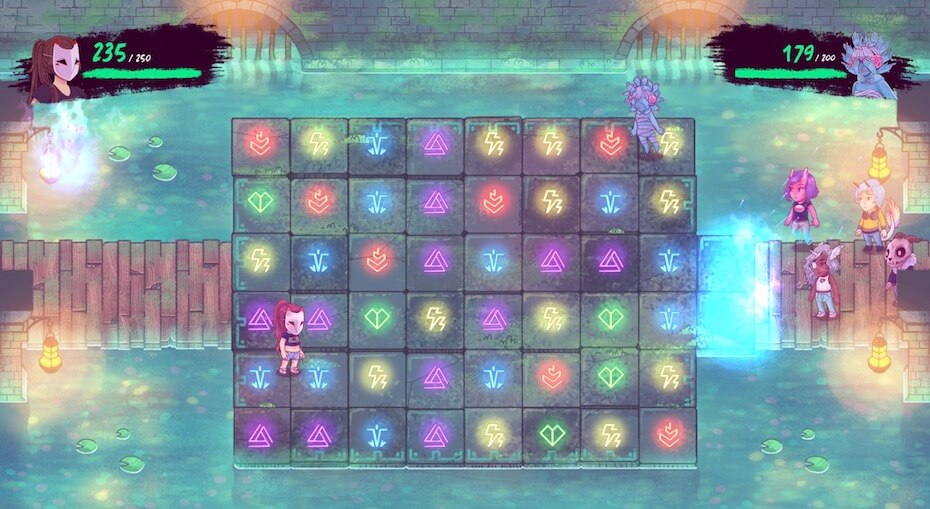 There's just enough complexity to this battle mechanic to make it a ton of fun to play without being too cryptic. Blue Strike runes immediately attack the enemy wherever they are, while red Ember ones activate a powerful fireball from a distance, which may or may not actually hit the enemy as they zoom across the board. The purple Void runes send over a wave of dark magic that harms the enemy while also slowing their movements, while yellow Shock runes send electricity through the ground, stunning anyone who steps over them while also causing. Lastly, the green Cure runes restore a little bit of your HP when you cast their spell. It didn't take me too long to wipe out the first Grievance, and I found the process super satisfying.

After this first exciting battle, the team manages to make it out of the shrine, but there's one big problem. While they were stuck underground, the portal closed, leaving Jun trapped in Emrys. As much as Jun loves her new friends and their world, she has to make it back home. Jun must conceal her identity from everyone but her friends and she and her squad are sent deep into the world's various off-limit shrines to discover all the secrets they hold. 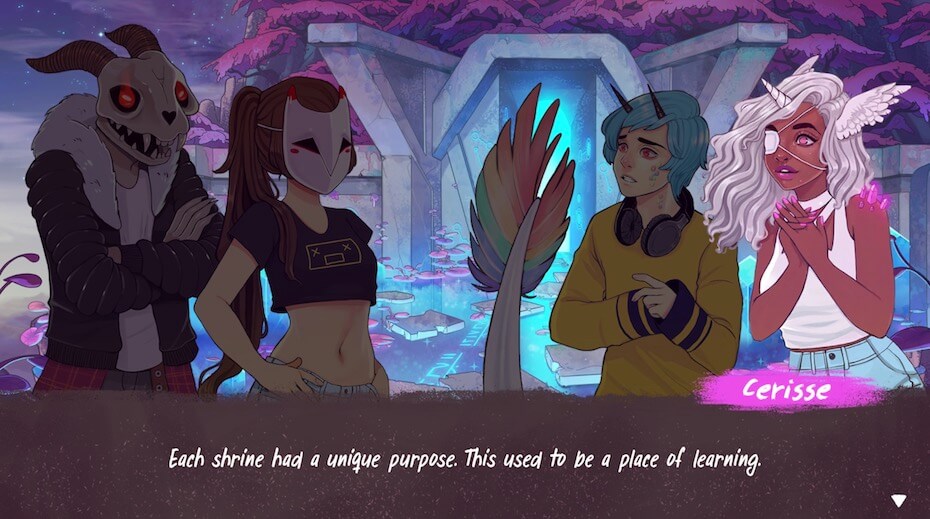 While Jun was horrified to be stuck in Emrys, I was a little relieved, because it meant I as a player had more time to explore the world and get to know its wonderful cast of characters. Besides the fact that everyone looks like fantasy creatures and they study and practice magic, Emrys feels grounded and closely resembles our world, which makes its unique characters a lot easier to relate to.

When you're not traversing through shrines, the game takes place in a gorgeously illustrated overworld populated with colorful characters. Though you don't learn too much about the folks of Emrys outside of the ones who eventually join your party, they all feel unique, and it's worth doing their side quests to learn more about the world. 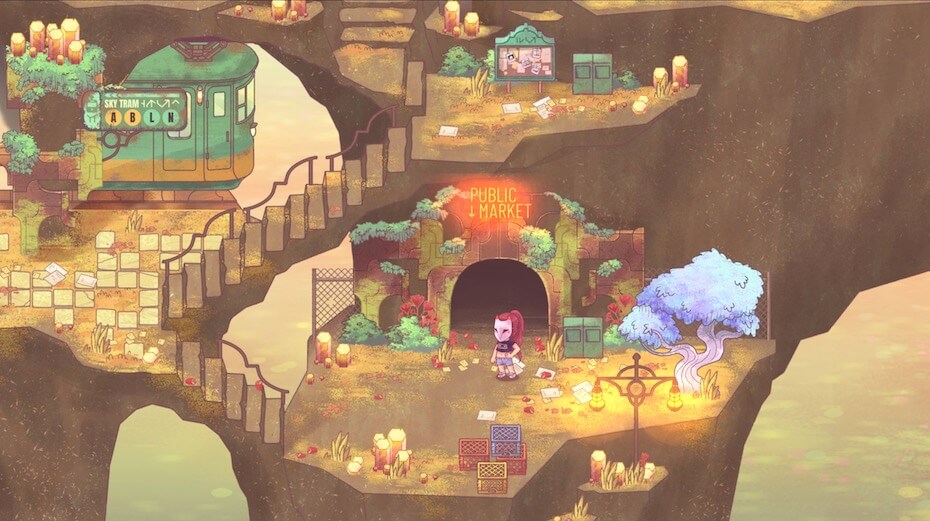 But Jun's friends are the ones who really shine. The skull-faced Horace immediately stands out as a hotheaded rebel, but as the game progresses, you realize he's a big softie at heart. The water drake Rainy is so sweet and timid, and it's incredible to see him gain confidence throughout the events of the game. I wanted to learn as much as I could about the six characters who eventually joined my party, and when the game had me select certain friends to take into the shrines with me, I felt guilty about leaving the rest out.

The game also gives the player the opportunity to shape Jun's personality through dialogue choices. While I don't believe my decisions made much of an impact on the game as a whole, they definitely shaped the way the other characters spoke back to me. I always err toward being extra nice in video games, and it was fun to see how each of the characters would react to being treated with kindness. 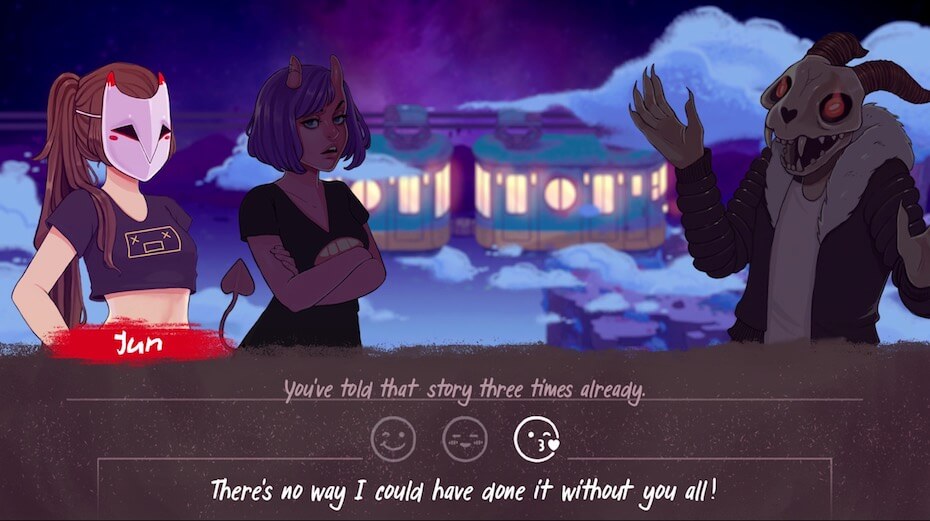 And while Jun's narrative was one major force in making me want to progress in the game, the innovative puzzle-based fighting system was just as much of a factor. Each time I defeated one room of enemies, I eagerly moved into the next room to face the next. Later, white runes were also introduced, which could be used to summon friends of my choice in battle. For example, I could call on Cerisse to heal me, or on Horace to launch a brutal attack, which could totally turn the tide of battle.

The game's boss fights utilize this same technique but on a bigger scale, with large boards and even more offensive moves to strategically dodge. While I didn't really find myself struggling too much with any of these fights, I didn't mind too much. The gameplay is still fun and engaging, and the point isn't to frustrate the player with the challenge level. In fact, the game has a no-damage assist mode, so players of all skill levels can enjoy the full story even if the battles are proving tough for them.

The World Next Door is so much fun to play because the game feels thought-out and each design element organically springs from the last. The entire options menu takes place within Jun's trusty phone, complete with cracks in the screen. And the Contacts page isn't just for getting in touch with your friends, but supplies valuable intel on them and allows you to assign characters to use their special abilities in battle with the help of the aforementioned white runes. 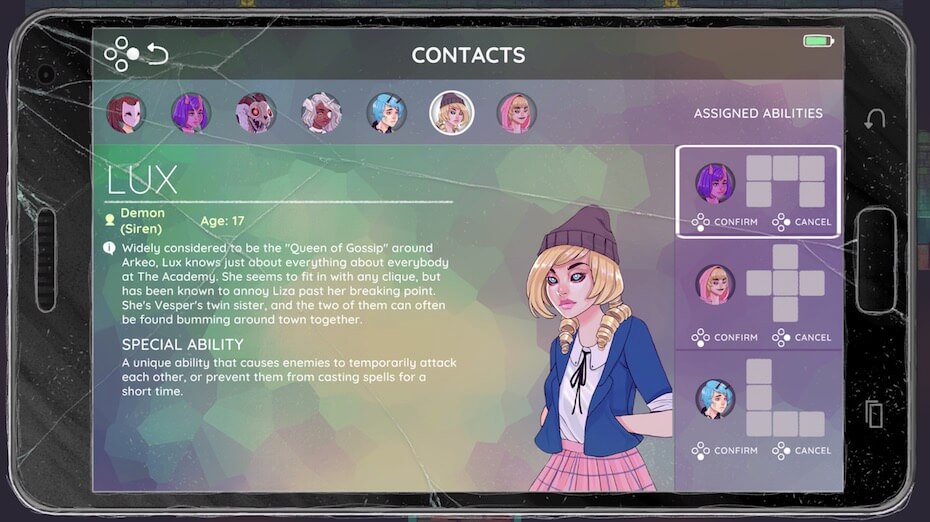 But while I loved every minute of The World Next Door, it doesn't quite feel like a complete game—primarily due to some story points that unfold toward the end. I won't say too much, but a late plot twist reveals certain plot details about Jun and how she got stuck in Emrys, and the circumstances pose far more questions than ever get answered in the game. I feel like this shift would have worked a lot better as a last-minute cliffhanger than something leading into the third act, but it makes me hopeful for a sequel, or at least some DLC, because I really want to know exactly what happened and if things will ever be fully resolved.

Even without my full closure, I think The World Next Door is absolutely worth playing. The lovely manga-inspired character designs are worthy of their Viz Media publisher, the punchy dialogue is well-written and a blast to read and the puzzle combat constantly kept me coming back for me. At a couple of hours long, the game's biggest problem is simply that there isn't enough of it—but that's nothing that can't be solved with a sequel. 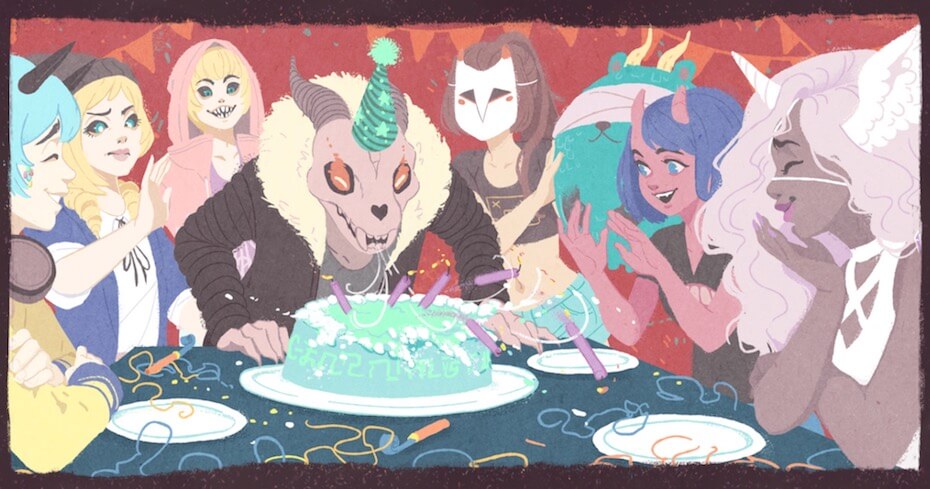 The World Next Door is available now on Steam, itch.io, GOG  and the Nintendo Switch for $14.99.

Need more inexpensive indie game recommendations for your Nintendo Switch library? Click HERE to find out why Hollow Knight is still my favorite indie game on the system.