Jenny Han has a little something for fans of all the teen movies she's loved before.

The To All the Boys I've Loved Before author recently got the film's cast to act out memorable scenes from some of her favorite teen rom-coms from years past. She posted the clips on Twitter on Sunday, quipping that she'd "coerced them" into recreating the scenes because she's "a pushy queen."

Pushy or not, Jenny knows her teen movie classics. She posted remade scenes from four movies, three of which come from the 1980s and one from the late 1990s. All have stood the test of time so far. 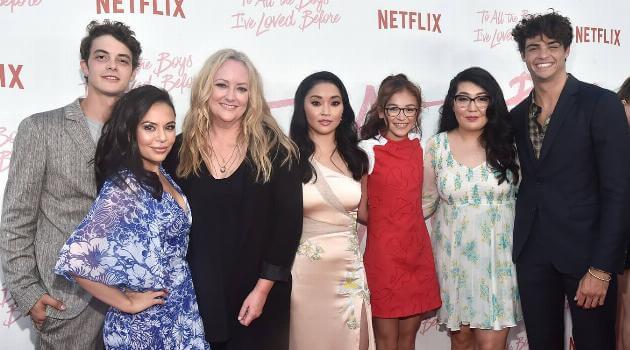 The author kicked things off with perhaps the most iconic movie dance move ever, which comes from 1987's Dirty Dancing, starring Jennifer Grey and Patrick Swayze. The clip features To All the Boys I've Loved Before's Noah Centineo (Peter) and Lana Condor (Lara).

When I was on the set of #ToAlltheBoysIveLovedBefore, I coerced the cast into making these teen movie moments bc I'm a pushy queen ???? pic.twitter.com/pGYXMFs6q5

Jenny then backtracked a bit to 1985's The Breakfast Club, starring Molly Ringwald and Judd Nelson. She got Israel Broussard (Josh) to do the honors.

And then Jenny turned to the boombox scene from 1989's Say Anything, starring John Cusack and Ione Skye. This one, though, stars Madeleine Arthur (Chris).

Jenny wrapped her series of video posts with an homage to the bleacher scene from 1999's 10 Things I Hate About You, starring Heath Ledger and Julia Stiles, with Noah in the spotlight. Alas, apparently no one thought to use the bleachers to film one more tribute to Grease, the 1978 movie-musical starring John Travolta and Olivia Newton-John.

What a trip down movie memory lane. We're glad To All the Boys I've Loved Before has joined the teen movie tradition. The Netflix rom-com was released Aug. 17.

The '90s were a great time for teen movies. Click HERE to see the '90s heartthrobs who still make us swoon.

jenny hanmoviesnetflixto all the boys ive loved before