Tom McGrath is a director, animator and voice actor who not only co-wrote Madagascar 1, 2 and 3, but voices Skipper the penguin in the films. To celebrate the recent release of Penguins Of Madagascar on DVD, we spoke with Tom about the movie and his personal history with animation.

If you were an anthropomorphic animal, what would it be?

1. I'd be a penguin. I'd be Skipper the penguin, I suppose. I'm so used to that. I can't think of any other animal I would be.

What item do you never leave home without?

What was your favorite cartoon growing up?

3. I loved Bugs Bunny on Saturday mornings because I could watch it with my dad. He would laugh at some things and I would laugh at other things, and I just remember that was really a bonding experience. I loved all animation, but Looney Tunes and Warner Brothers always made me laugh.

What recent animated movie do you wish you'd been involved in?

4. I like How To Train Your Dragon 2, because as funny and fun as the penguin movie is, Dragons 2 is a big epic drama adventure on the other side of the Dreamworks spectrum. That's why I like working here, because we can do comedies and we can do epic adventures–more genres in animation than just the typical cartoons.

5. Spiders! They still freak me out. I try to talk to them and it makes them more friendly to me, but if I find one under a pillow, I'll freak. 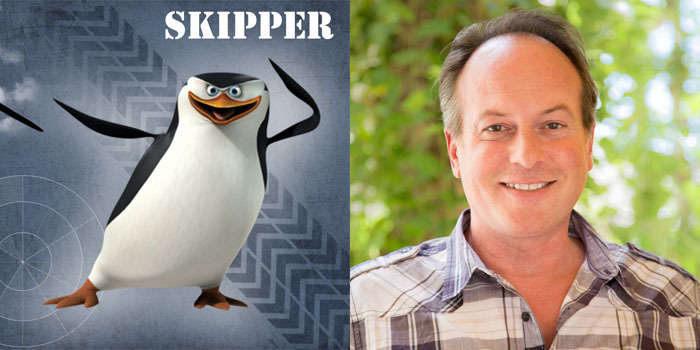 On the origin of Madagascar's penguins…

I wrote it with my partner Eric Darnell. There was a scene where the zoo animals' crates are washed overboard, and I thought it'd be funny if it was caused by these who penguins didn't want to go to Africa, so they hijacked the ship and turned it around. It started as a gag, but as we developed the story, we found a bigger role for the penguins and this little elite unit, kind of like a war movie…John Wayne war characters in little penguin bodies.

On getting cast as Skipper…

When I was pitching the scene to the studio, I would just do my poor man's Robert Stack or Charlton Heston. Originally we were going to get Robert Stack to voice the penguin, but he had passed away, unfortunately. So I ended up just doing the voice and it spiraled out into a big gig for me.

I think it brought me out of my shyness a little bit to play with that persona and be a little more boisterous in the room. It brought me out of my shell and in a way it taught me to be a better director. In animation when you record a character, you're behind a microphone and script pages. There's no sets or anything. I loved the kind of feedback I got that I could in turn give to other actors. Walking a mile in their shoes I could better understand what it's like to be an actor, and that made me a better director.

On the penguins getting their own film…

Eric Darnell and myself would always have more penguins material than we could fit into an 80-minute movie. They weren't the main characters, they were pure comic relief, so it was fun to finally give them their own movie and plot line. During the course of the three movies and the TV show, they became deeper and richer and more defined as Private being the heart, Skipper being the courage, Rico the muscle, and Kowalski the brain. At that point we felt like they could support their own feature film.

On why you should check out Penguins Of Madagascar…

It's just fun! It's funny in the same way as the Madagascar films, which were always aimed to have the parents laugh as much as the kids laugh. There's something in it for the whole family. Even though they're supporting their own epic adventure story, they can still be their own comic relief, in a way.

The DVD is out St. Patrick's Day! There's a fun scene where the penguins think they're in Ireland but they're really in Shanghai, and I think that really works with the holiday.

Love the penguins in the Madagascar series? The DVD and Blu-ray are out on DVD now. Share your thoughts with us in the comments and at SweetyHigh.com.