Tony Bronisevsky is an award-winning cheerleader who is known as a big sister to many throughout the cheerleading community. 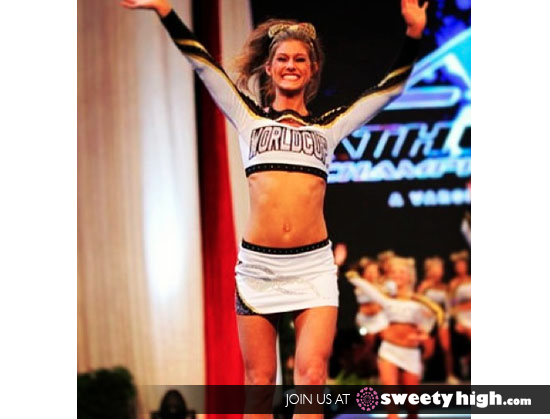 We spoke to Tony recently about her achievements and the big steps she's taken to fight bullying!

Tony Bronisevsky has been involved with cheerleading for about 10 years. Before she became a cheerleader, she was a roller skater, and Tony's older sister was a cheerleader. She was also into tumbling and gymnastics, but the team aspect is what really drew Tony to cheerleading.

In February, Tony received the TLCM Cheerleader Of the Year Award through a big campaign on Facebook, and was even featured on the cover of the TLCM magazine!

"Any time I see bullying, I try to stand up and tell them to stop," Tony said.

"I think bullying is such a problem because adults and people in charge don't think of it as such a big deal," she said. "Some people think it's a culture, or a way of life. They think it's just words, that it's not actually hurting anyone, and it's easy to overlook."

Tony Bronisevsky said that bullying is becoming more and more of a problem, and that the best way to end it is to get more people, especially adults, to take a stand.

She suggested bigger campaigns, such as Twitter trends and Instagram signatures, to raise awareness about bullying and let people know it's not okay to bully others.

"Some people bully just to fit in, thinking it's funny, and that it's cool," Tony said. "There comes a point where it's really not funny."

On top of her anti-bullying advocacy, Tony also coached a special needs cheer team at her gym. She has many sources of inspiration that motivate her in everything she does.

"I'm definitely inspired by my coaches," Tony said. "I appreciate that they have starting pushing me, and they go around inspiring others and helping us as cheerleaders in everything we do."

She said that her sister has also been a huge inspiration to her, especially because she got Tony interested in cheer in the first place.

"She has a great personality and can talk to anyone," Tony explained. "She really knows how to get by. She was my captain when we were in cheer together."

When it comes to being a cheerleader, Tony stressed how important attitude is before anything else.

"Always be positive in everything," she said. "There's going to be ups and downs, so you have to figure out what makes you happy."

While cheerleading isn't for everyone, Tony explained, for those who love cheer, it's a way of life.

"Work hard and never give up because it's what makes you a true athlete," she said.