When I was asked to cover the Tony's Chocolonely Chocotruck tour, I thought the experience would consist of a simple chocolate bar tasting. It wound up being much, much more than that.

I visited the Chocotruck at one of its West Coast stops in Santa Monica and spoke to its tour co-pilot Stephanie Iller Drachman to get the full picture.

"The tour is really about storytelling and raising awareness," Stephanie explained. "We exist to end modern slavery and illegal child labor in the chocolate industry. It's existed for a long time, but it's something a lot of people aren't aware of." 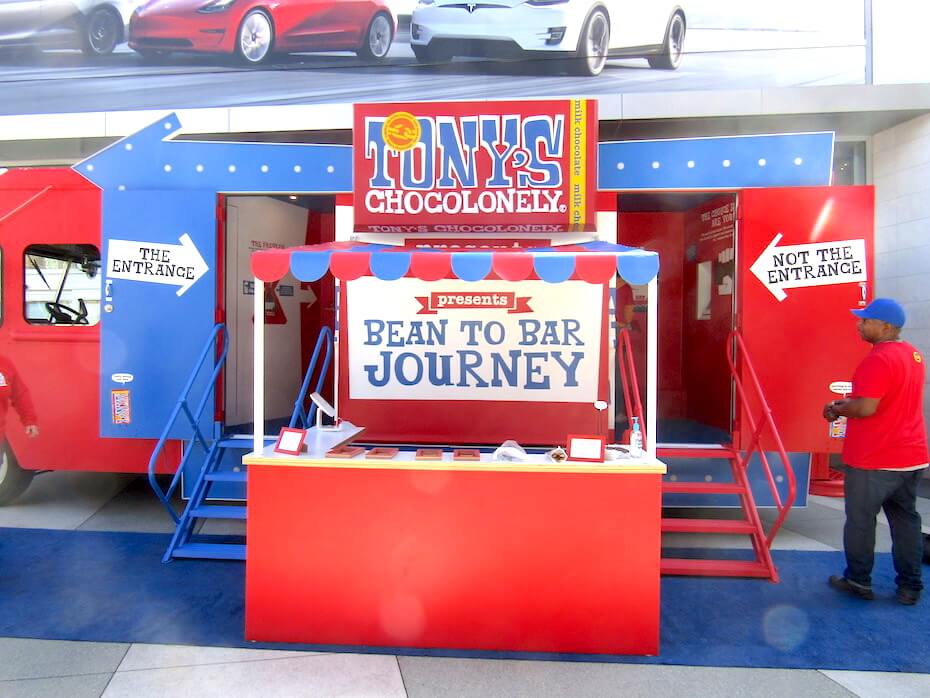 Tony's Chocolonely wants to disrupt the chocolate industry, and their roadmap to 100% slave-free chocolate starts with spreading awareness of the issue, which then inspires people to act. They want to lead by example and show the other chocolate companies out there that they don't have to rely on slave labor to make it as a prominent chocolate company. 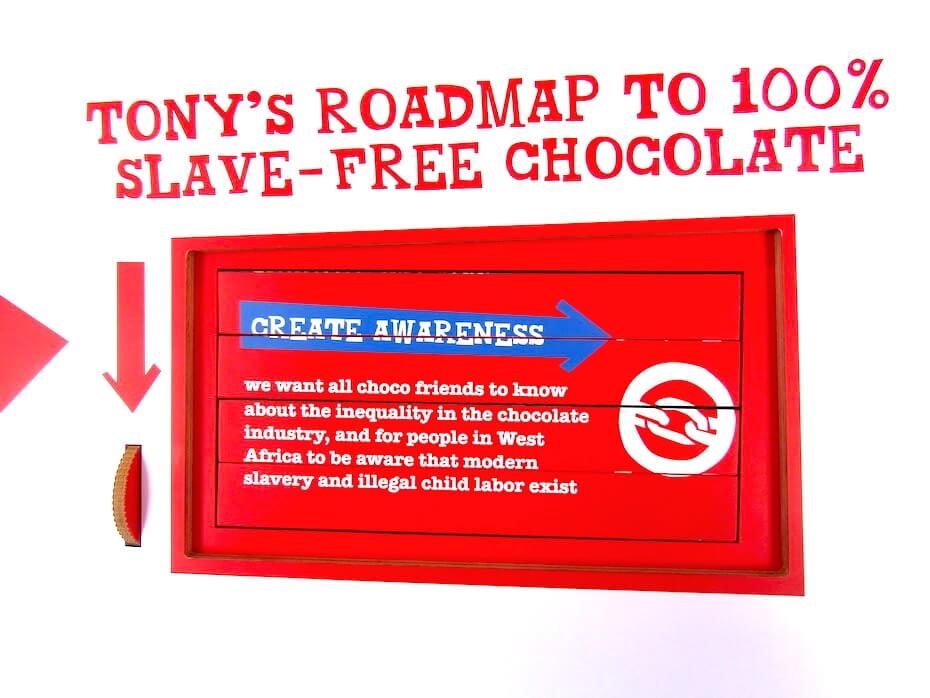 By trading directly with partner cooperatives, they know exactly where their cocoa beans come from and are able to ensure that every bit of chocolate you consume, from the cocoa mass to the cocoa butter, is traceable to its source. 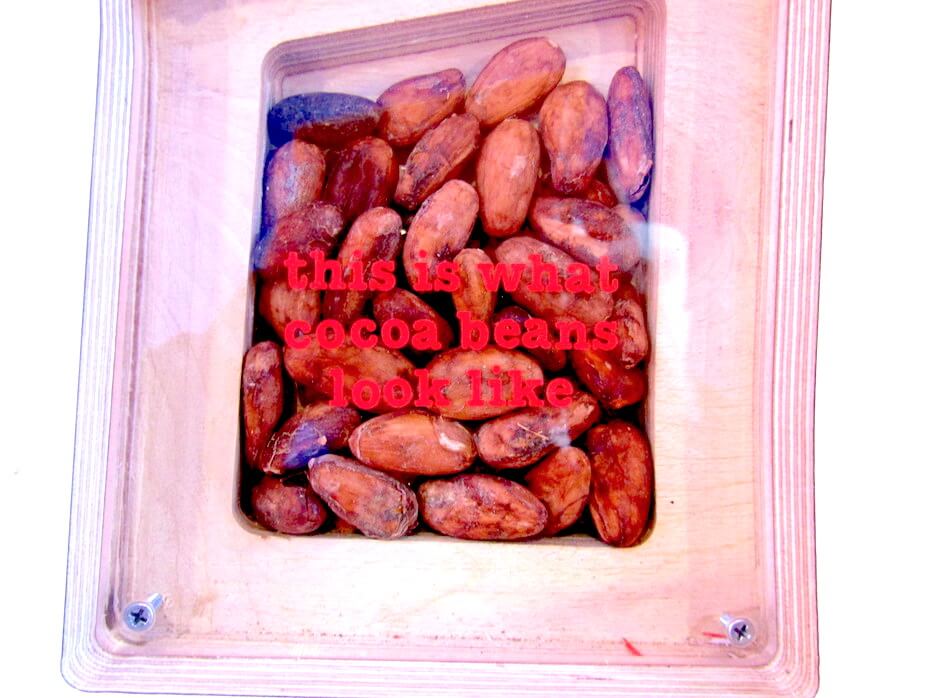 "We want to let people know this issue can be solved," she said. "You can be both successful and profitable while being sustainable and ethical. We work with them on the ground to change the value chain of chocolate."

She added that this imbalance exists because there are millions of cocoa farmers and billions of people who eat chocolate, but only a handful of companies that actually control the chocolate market. Tony's wants to pave the way for other chocolate companies to ethically source their cocoa, too.

This inequality is why all of Tony's chocolate bars are divided into unequal chunks. According to Stephanie, the company will return to equal chocolate chunks in their bars only when there's equality in the chocolate supply chain. The map of West Africa, including the countries of Ghana and Côte d'Ivoire where Tony's Chocolonely sources its cocoa, is also cleverly hidden in the divisions within the bar. 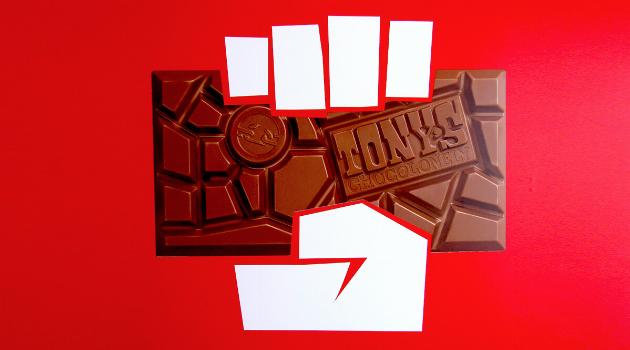 In order to help Tony's Chocolonely customers put faces to their cocoa farmers, the company also sent the talented Ghanaian-American photographer Joshua Kissi to Ghana and Côte d'Ivoire to capture the essence of what it's really like to be a cocoa entrepreneur. You can check out a behind-the-scenes look at his experience in the video below.

While Chocotruck pilot Corey and co-pilots Stephanie and Nicole offered up tasty chocolate samples and sold bars outside, the inside of the truck was furnished with interactive displays revealing the history of Tony's Chocolonely. There is a lot to learn about the way chocolate is made and how it can be done better. Perhaps my favorite part of the exhibit was a set of View Masters displaying some of Joshua Kissi's striking portraits.

While I'd learned a lot, I was especially excited to taste Tony's Chocolonely chocolate once I knew its incredible story. First, I got to nibble on a piece of a Milk Caramel Sea Salt bar. I'm a big sucker for anything salted caramel, and with its hunks of sweet, crunchy caramel bits and just the right amount of salt, I was hooked. The chocolate itself was thick and satisfying. Maybe it's because I knew it was the result of a great cause, but the taste was truly something special.

Next up, I tried a huge chunk of their Dark Milk Pretzel Toffee bar. Again, it was like they'd anticipated exactly what I like, because I adore pretzel and chocolate together in any capacity, and they both blended beautifully with the toffee. Plus, I loved the milk-dark combination in the bar, giving it some the richness of a dark chocolate without sacrificing too much sweetness. Lastly, I tried a bit of a Dark Almond Sea Salt bar, Stephanie's favorite, which was far less bitter than a lot of other dark chocolate I've had, making the salty, nutty flavor a very pleasant one.

Stephanie also sent me back to the office with four bars of delicious chocolate to share—and to share the word along with it. The experience seriously changed the way I think about chocolate, and while I probably won't be able to replace all of the chocolate in my life with Tony's Chocolonely products, I believe I'll be more conscious of what I'm doing every time I buy chocolate in the future. The knowledge that I'm doing something to help makes every bite of their chocolate taste special.

It's still not too late to catch the Chocotruck on tour. Check out the dates and locations below, and click HERE for more info on the specifics.

If you're passionate about chocolate, click HERE to find out what your favorite type of chocolate reveals about your personality.