It's officially fall this week, but that doesn't mean the music that dropped in the last seven days has cooled down in the slightest.

Our favorite artists are keeping things as hot as ever, and with brand new singles, jaw-dropping musical videos and epic albums releasing left and right, it seems like it gets harder and harder to narrow it down to 10 picks every week—but artists including Angels & Airwaves, Katelyn Tarver and Payton Moormeier just forced our hands. 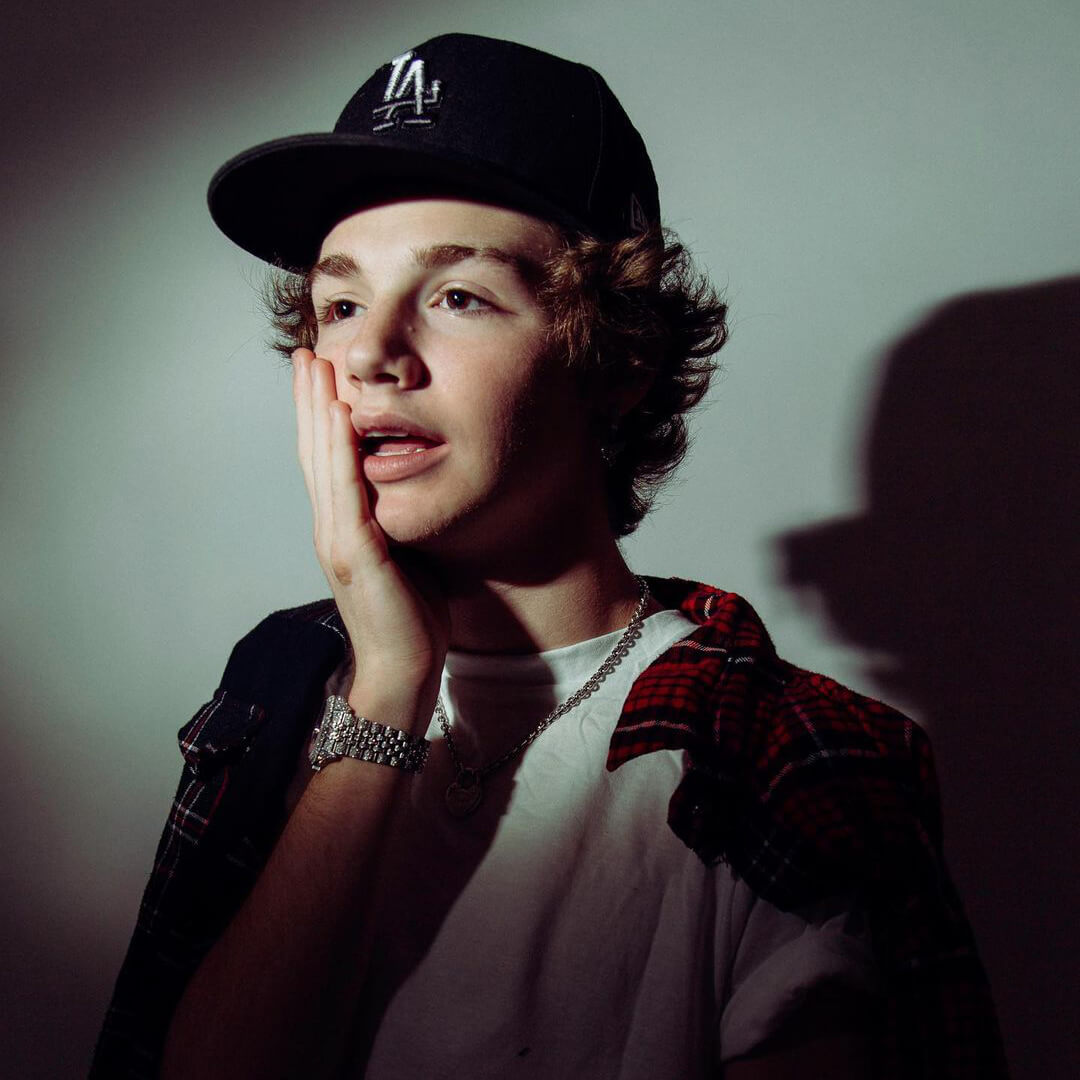 Want to know what we're listening to this weekend? Just keep scrolling to check out our 10 favorite things that happened in music this week.

1. Gwyn Love Proves She Doesn't Need Her Exes in 'glow'd up'

If you're looking for the ultimate earworm to kick off your weekend, look no further than Gwyn Love's new song, "glow'd up," which is as catchy as it is empowering. With an unforgettable piano hook and a bouncing beat, this track tells the story of a young woman whose glow-up has all of her exes chasing her, but definitely knows better than to fall into old traps. "I was in the recording studio in Vancouver when this song came to me," Gwyn explained in a press release. "My ex had hit me up while I was in the studio recording with Louise Burns. Louise loves to do this thing where she sings random phrases while she's talking and I had caught onto that after spending a week with her. I playfully sang 'All my exes keep hitting me up, yeah they're hitting me up.' She was like, 'Is that a song or did you just make it up?' I told her I had just made it up and she told me it should be a song. I went to Toronto the next week and finished this super cheeky song that had me dying laughing as I was writing it."

If pop-soul artist Wyn Starks isn't on your radar yet, change that ASAP. The 11-track album, featuring viral hits including "Circles" and "Dancing My Way," is a soulful fusion of catchy beats and poignant social messages touching on politics and racial equality. His voice is truly one-of-a-kind. "I decided to call the album Black Is Golden because it is!" Wyn said in a press release. "It's important that we know who we are, and celebrate the beauty we've contributed to this society. We should all celebrate each other's differences, especially considering the history of injustice in this country when it comes to black and brown people. I'm learning how to celebrate these accomplishments in my own life, too—to love myself, flaws and all."

Singer-songwriter Ethan Thompson is better known by the name Alt Bloom, and he's another up-and-coming artist we've been watching in 2021. His new single, "High School," looks back at the past, and blames the current state of his life on the mistakes he made in school. "Quarantine was a mixed bag of feelings," Ethan explained in a press release. "I was bummed to not be able to tour my first EP, but I was happy to be home in Montana recording music in my childhood bedroom. It brought me back to my roots and gave me a chance to get even closer to my fans—now dubbed 'the tribe.' We all lifted each other up during the most locked-down of times."

4. Matilda Mann Lets Us Peek Into Her Mind With New Sonder EP

West-London-based singer-songwriter Matilda Mann's brand of bustling, whimsical pop is positively infectious, and her new EP Sonder is a raw showcase of her abilities as an artist. Featuring six gorgeous songs, the collection has a soothing, dream-like quality to it that's the perfect complement to a chill weekend spending time with those you love. Her music is poetry, and you just have to hear it for yourself.

5. MASN Brings Out the Optimist in All of Us With 'Strawberry Huracan'

MASN has been wowing us for a while now with his genre-defying blend of pop and hip-hop, deftly combining the two into something uniquely MASN, and his new track "Strawberry Huracan" just might be our favorite yet. The new track is an upbeat beacon of opportunity and hope, reminding us all of the potentials for joy we have in life. The song will appear on his upcoming EP, This Place Wouldn't Be The Same Without You, which releases October 29. "'Strawberry Huracan' is the breath of fresh air on this EP," MASN said in a press release. "Continuously listening to sad songs would drown you in sadness, so you need the contrast to balance everything out. I wrote 'Strawberry Huracan' because I wanted a good driving song and it reminds me exactly of what I'm grateful for. That contrast alone is so vital to this EP as a whole." The end of October can not come soon enough.

6. Sebastian Javier Wins Our Heart With the Bilingual Double Release of 'Day at a Time' and 'Un Día a la Vez'

Born in Argentina and raised in Canada, Sebastian Javier is a multifaceted singer-songwriter who's just as adept at performing in English and Spanish, and he shared those talents in the perfect way with his latest pair of releases. Today, he released two versions of the same heartfelt song: "Day at a Time" in English and "Un Día a la Vez" in Spanish. It's another positive look at a future that's full of hope and possibility, and his voice paired with a scratchy acoustic guitar brings the idea elegantly to life. "It's a reminder to take everything one day at a time and focus on right now," Sebastian shared in a press release. "Wake up every day and start fresh."

7. Boys World Capture the Euphoria of Crushing Hard With 'Something in the Water'

Boys World is without a doubt our favorite up-and-coming girl group in the music space right now, and you only have to listen to their song "Something in the Water" to understand why. The song has a new lyric video this week, and it's the perfect danceable showcase of all five singers' unique talents and that bassline, plus the song's joyful message is sure to get stuck in your head. "'Something in the Water' has got such a summer feel," the group said in a press release. "We hope our fans get a euphoric feeling when they listen to it—butterflies, happiness, excitement… whatever it might be. This song is about living in the moment and not worrying about what's to come. It really embodies the feeling of going for something, even though you might be scared… even if it's just for the night."

We've adored Angels & Airwaves and their unique approach to rock since the early days, so their first album release in seven years has us very excited, and these 10 new tracks do not disappoint. Including the powerful, synth-heavy "Spellbound" and today's new single "Timebomb," which feels like it goes right back to the band's roots, this album is Angels & Airwaves at their most creative and boundary-breaking. "I'd say that going into Lifeforms, we had already established that the band had spread its wings in terms of what it was capable of writing," drummer Ilan Rubin told Sweety High. "Musical diversity felt a lot more natural as opposed to slightly risky. The album has a lot to offer and I think Angels fans, as well as casual listeners, will be surprised."

If you've ever been told that you used to be nicer, you need to listen to Katelyn Tarver's chill new single "Nicer." That's exactly the message Katelyn receives in the song, but she sees that as a positive, learning not to fake niceness and suppress her own wants in order to appease others. "I pulled a lot from my own experiences for this song," Katelyn told Sweety High. "To me, this song is just about the process of getting to know myself more—seeing all the ways I've made myself smaller for the sake of others, being a people pleaser, being too apologetic. As I get older and see those tendencies in myself, it's nice to be able to try and grow out of them and become more comfortable in my own skin."

10. Payton Moormeier Pens a New Pop-Punk Classic With 'What I Need'

There's a good reason singer-songwriter Payton Moormeier is one of the biggest young names in pop-punk. Just listen to the opening riff of his new single "What I Need," and you'll get it. This new track is part Bill Withers' "Lean on Me" and part "When I Come Around" by Green Day, and it all comes together to tell an upbeat, feel-good song about how a breakup can actually be for the better, and the outlook you can have on life when you choose not to focus on the problems. That's a message we can all get behind.

Missed our favorite tracks of last week? Click HERE to check out our top 10 releases of the week of Sep. 17, 2021.