Trine 4 Is Like a Full Game of 2D Breath of the Wild Shrines, and I'm Obsessed

I've been hearing great things about the Trine games for years, but I'd never actually played one until I got to demo Trine 4: The Nightmare Prince at E3 earlier this year. It only took a few minutes playing Pontius the knight's intro level for me to know I absolutely had to see the rest of the game.

That time has finally come. The game dropped earlier this week, and the folks at Modus Games were kind enough to provide me with a review key for the game on Nintendo Switch. After happily blasting through the game, I can say it was well worth the wait.

The Trine games revolve around three heroes—Amadeus the wizard, Pontius the knight and Zoya the thief—and their unique abilities to stop the forces of evil. The Nightmare Prince begins when the trio is tasked with finding the young Prince Selius and bringing him back to the Astral Academy where he belongs. However, they soon discover there's more to his story than meets the eye. It appears he's been cursed by an evil spell that transforms his nightmares into dangerous reality, and if they can't stop them, his bad dreams may take over the entire world.

Trine 4 might look like any other side-scrolling action platformer with puzzle elements on the surface, but the gameplay is so much deeper than that because of its three heroes. Amadeus can conjure objects out of thin air and use his magic to effortlessly levitate them, while Pontius is handy with a sword and shield, and can also use his bulk to move objects. Then there's Zoya, who is skilled with a bow and arrow and can also use a rope to climb to new heights or tether objects together. 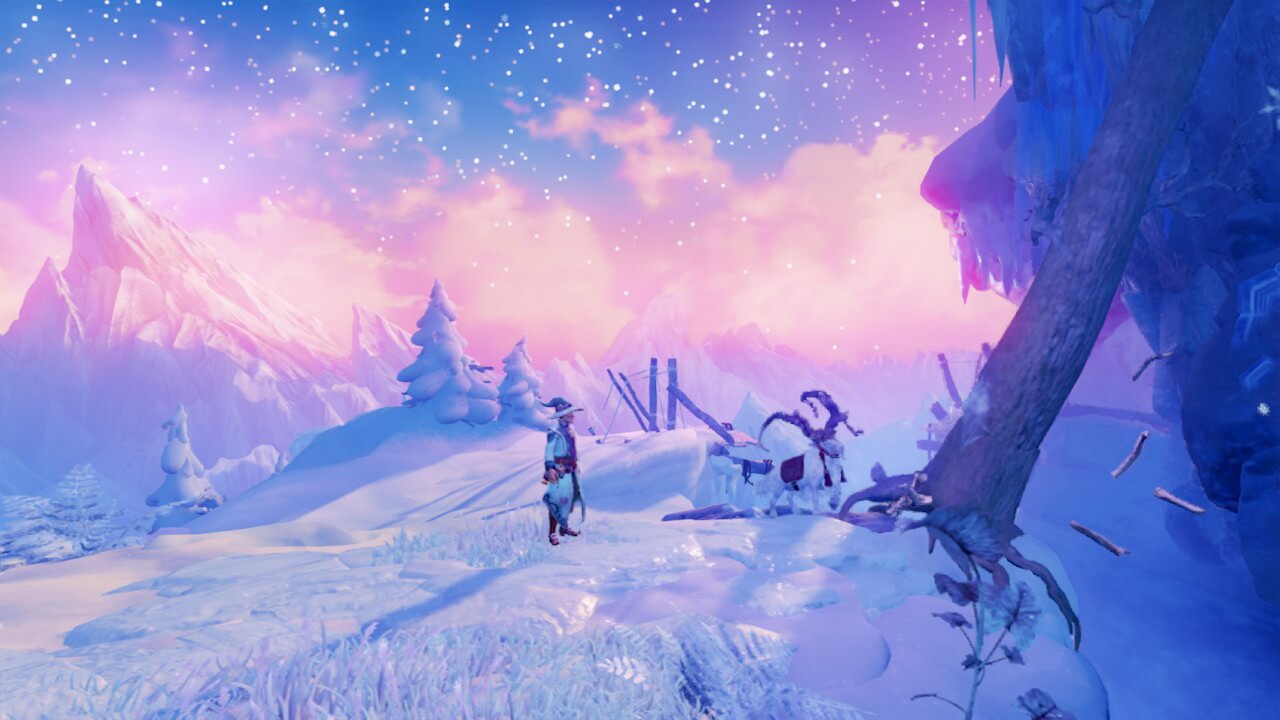 At first, these different abilities seem quite basic, but as I played through the game and saw how these tools were utilized in hundreds of different ways in various combinations, I began to understand just how complex and special the gameplay really was. Over time, I started thinking of these skills like I did the Runes in The Legend of Zelda: Breath of the Wild, where, with a little bit of ingenuity, you could solve the same problems in a dozen different ways, depending on your approach.

Take this early puzzle, for example. Above the heroes is a stopped water wheel, with a stream of water trickling just out of reach into a chasm. There's a large gap here, with a single metal pipe sticking out near its center. In order to get the water wheel spinning, I had to conjure a magical box with Amadeus's powers, then create a rope of the correct length with Zoya's abilities before switching back to Amadeus to float the box to the appropriate space, leaning on the pipe to create a rope bridge. From here, I crossed the bridge with Pontius, and then used his shield to bounce the falling water into the water wheel, opening the gate into the next area. It may sound complex, but this is actually one of the simpler little puzzles in Trine 4. 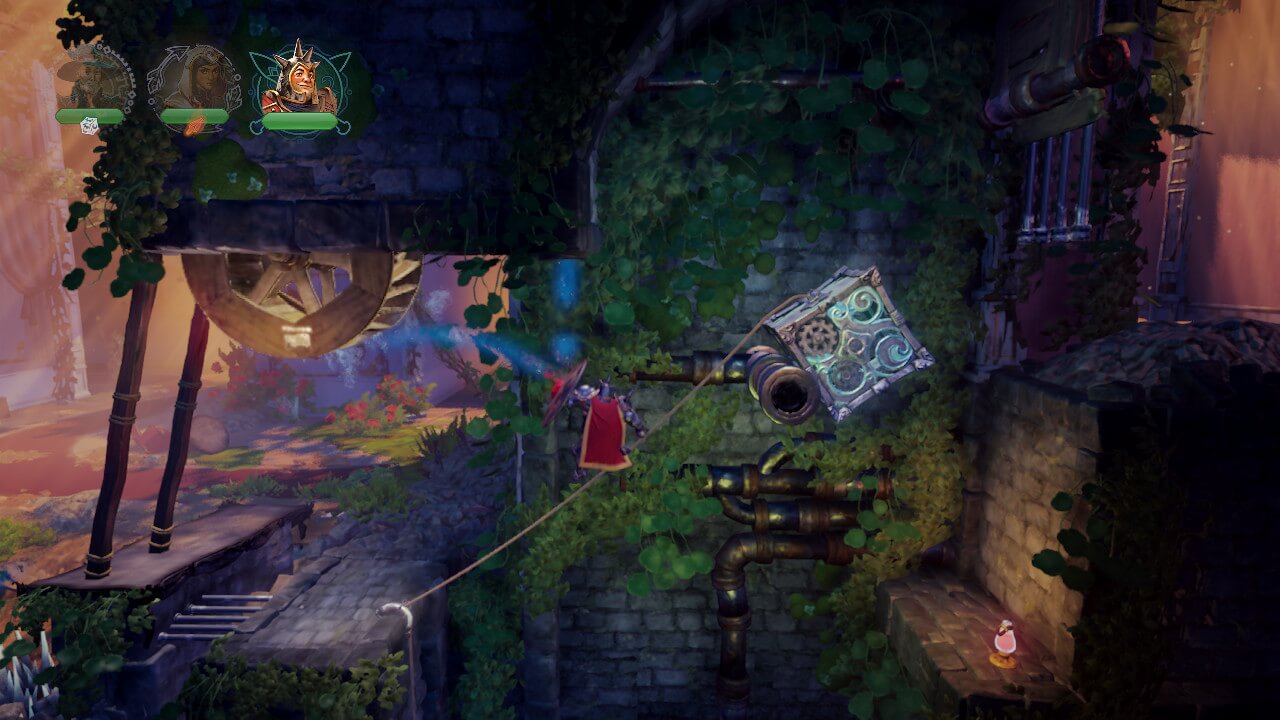 Making my way through the game's elaborate puzzles and contraptions was the best part of the game, almost always requiring me to swap between all three characters and use skills from each one in tandem to get to my solution.

Sometimes, I'd come up with clever and elegant solutions, which I'm sure were the intended strategies the developers had in mind. Other times, what I set up on the screen was a monstrous mess of random pieces held together by awkward ropes, with teetering objects defying all laws of gravity—but it worked. I'll admit that, a lot of the time, using brute force to make my way through a challenge was just as fun as smartly sussing it out.

Unlike in many other action-puzzle games, combat sections of Trine 4 are completely separate from the puzzles, so you're never balancing too much at once. During these mandatory battles, your current area is cut off from the rest of the world by a nightmarish purple forcefield, and it will only disappear once you've defeated every enemy in sight.

While the fighting wasn't my favorite part of the game, I was happy that I was provided with options. Early on, I relied mostly on Pontius and his sword during battles, but later, Zoya's new fire and ice arrows became invaluable due to their status effects. Also, once I'd mastered Amadeus's magical movements, I loved powerfully smashing enemies with floating crates, balls and bridges. Because these areas can be a little repetitive, it's great that players can still approach them however they wish. These fights also give players experience points, meaning that each one brings you closer to unlocking new abilities for your characters, which also expands your arsenal of skills for puzzles as well as battle.

Most of the game's bosses are also noteworthy because they force the heroes to confront their biggest nightmares. During these battles, each hero must take on their greatest fear alone, pushing their unique skills to their limit. However, I thought the more collaborative bosses utilizing all three characters were the ones that really shined, given that they're true to the spirit of the game.

Exploring Off the Beaten Bath

If you were to try play Trine 4 without seeking out any of the fun little extras hidden away throughout the world, you'd probably be done with it pretty quickly—but you'd be missing out on most of the fun. It is full of optional treasures and extras that you'll only discover if you venture off the beaten path and are ready to solve extra tricky puzzles. 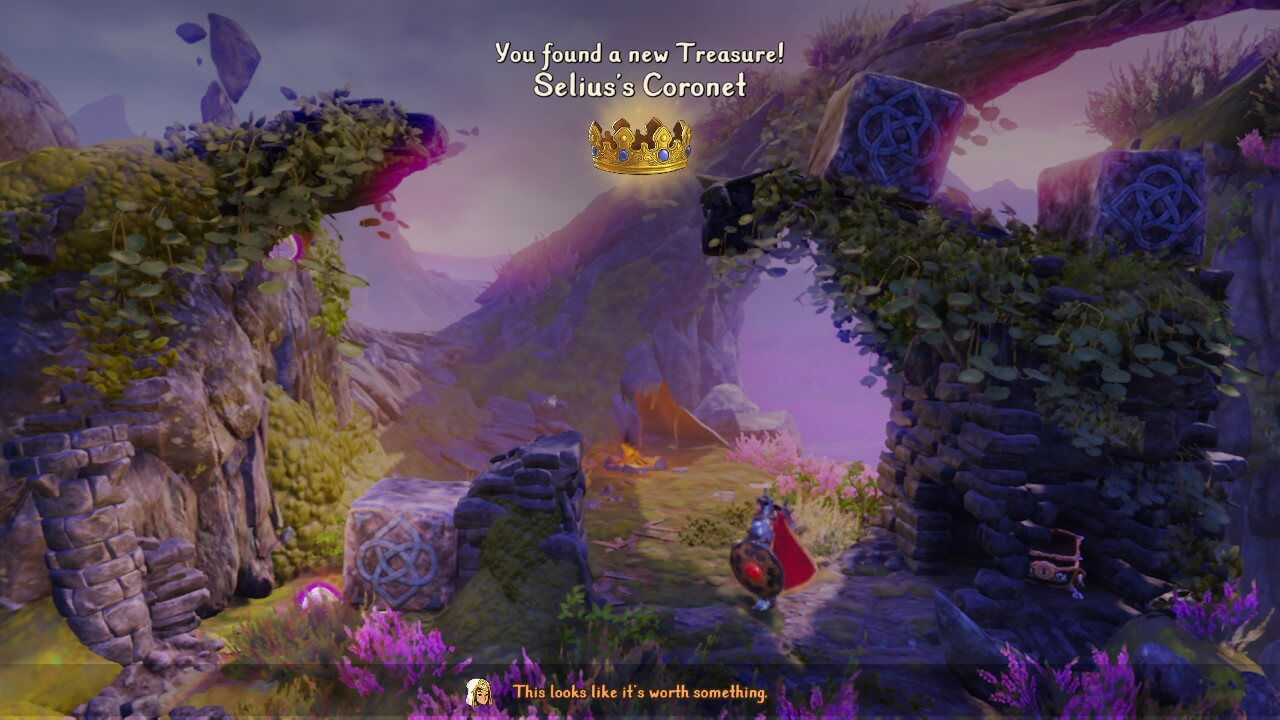 While many of the knick-knacks you'll find are only there for the satisfaction of finding secrets, these obscure areas are also full of pink water droplet-shaped potions that are used to unlock Upgrade Points. In turn, these can be used to add secondary buffs to your characters' skills to make them even stronger, so they're worth picking up. 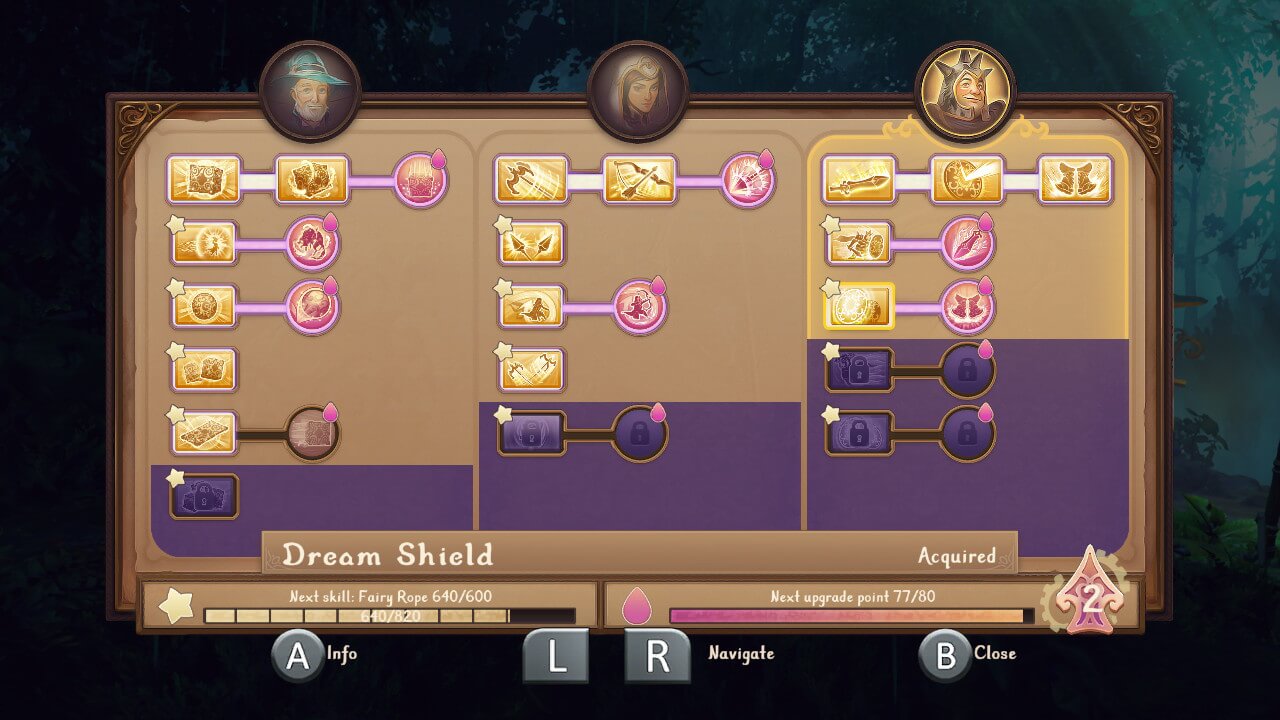 And if you enjoy Trine's special brand of puzzle-platformer, you're going to want to search high and low for every secret you can find. There wasn't a single puzzle that I gave up on once I'd discovered it, because I found figuring out something that was stumping me to be the single most satisfying aspect of the game.

At one point, I spent more than 15 minutes in a single room trying, again and again, to hit eight different switches using a beam of light, two portals and mirror shields before finally getting it right—and then realizing it wasn't a critical route toward progression, but just a challenge for additional potions. I wasn't even annoyed because figuring it out felt so good.

Even though I thought I was being incredibly thorough, I still didn't have enough potions to unlock Pontius' last move by the end of the game. I was even more surprised when I looked at my Collections page and saw I'd collected fewer than half of  Trine 4's hidden objects. The good thing is that I'm more than happy to go back and look for them. 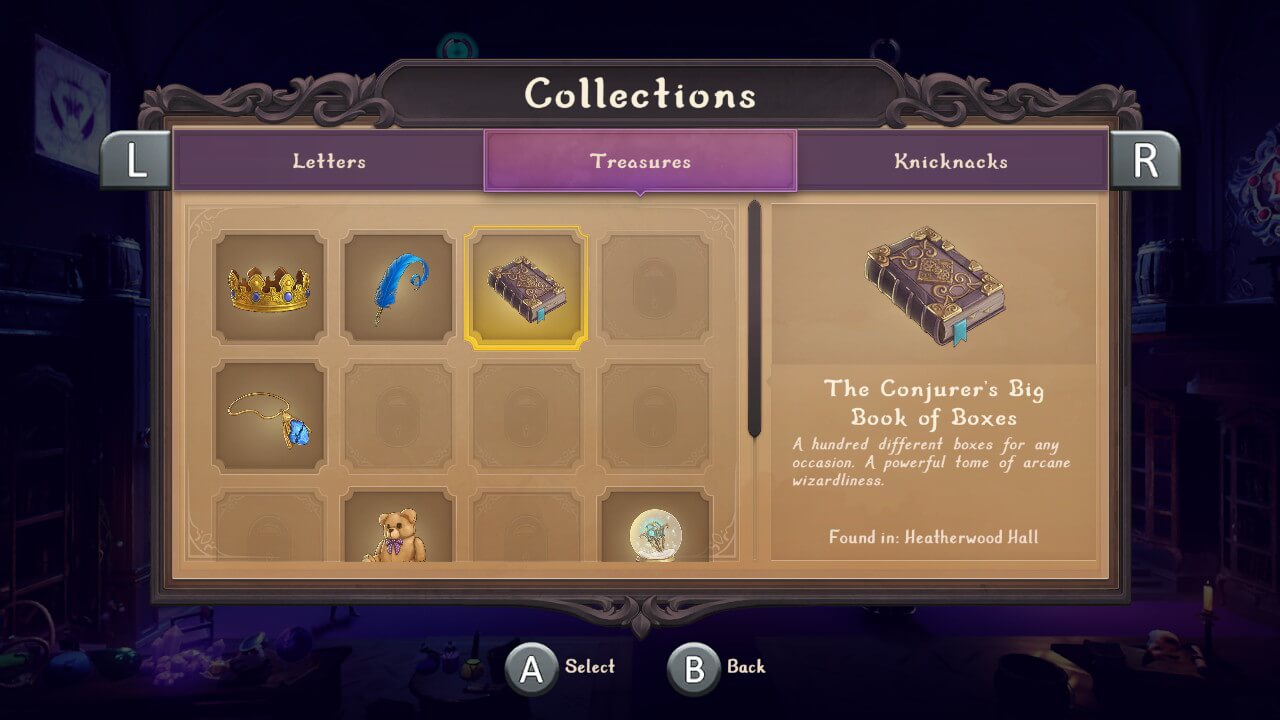 Trine 4 takes its medieval setting and runs wild with it. From forests to towns, dungeons and castles, it's all stunning to look at and never gets dull. On top of that, it features some truly magical moments, like meeting a talking badger, and rescuing an adorable injured bear in the Blueberry Forest, only to have it become your ally. Even the level selection map unfolds as a beautiful hand-drawn scroll, perfectly suited to the tone of the game. 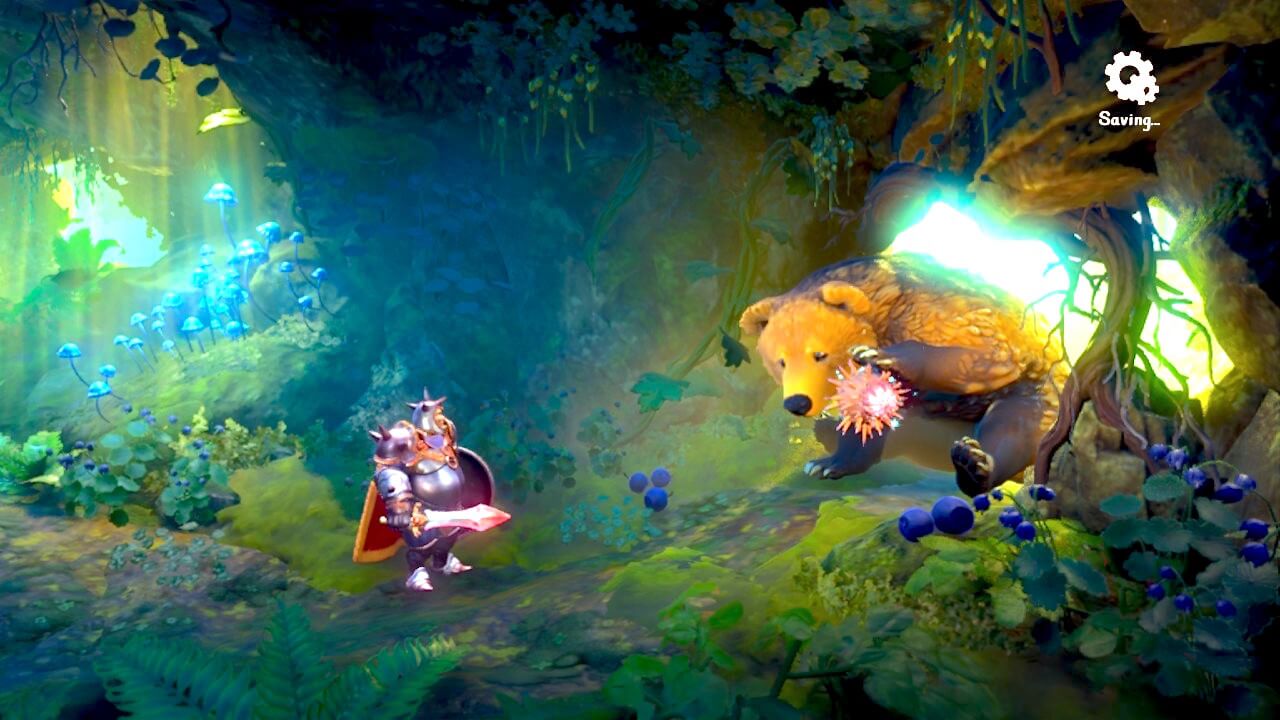 Trine 4 also features some solid voice acting, and though the story is unlikely to surprise anyone, it's still an engaging package for the great gameplay, and I loved seeing it through to the end. It's one of the most satisfying puzzlers I've played all year, and it's something I can see myself coming back to again and again. 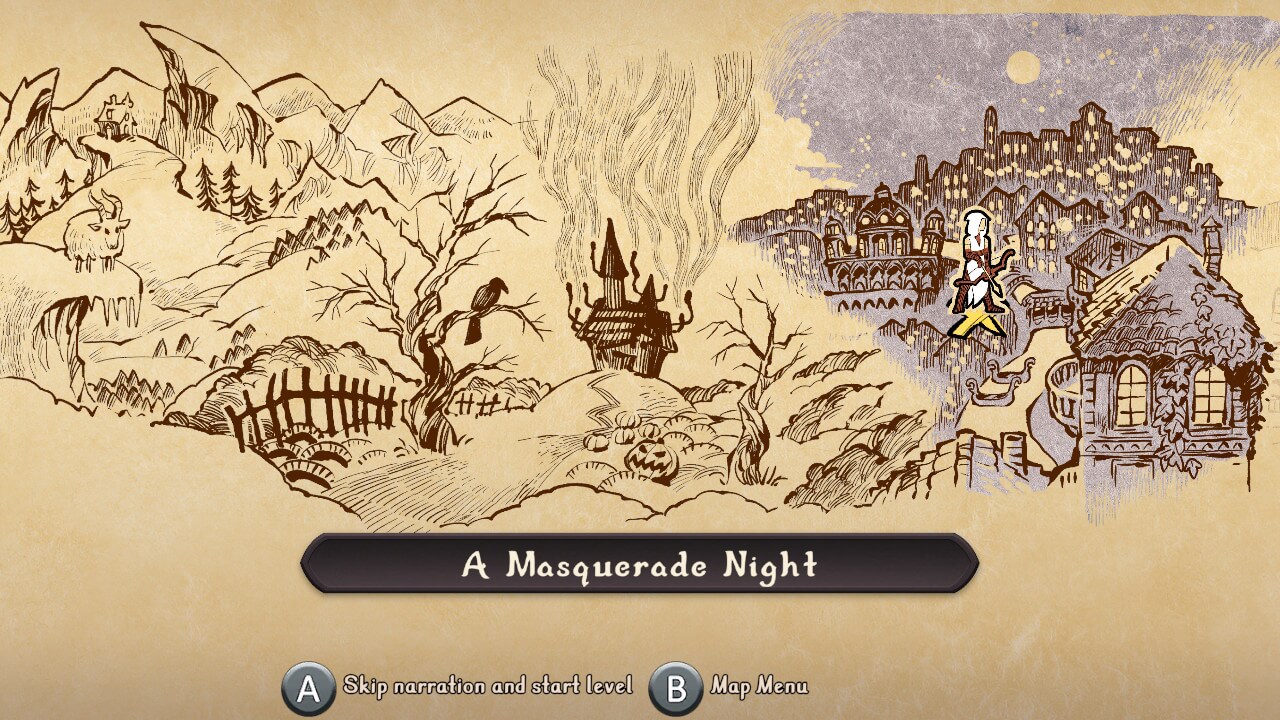