True Primal Makes Hearty, Delicious and Good-for-You Soups With None of the Junk

With the weather getting very chilly in my neck of the woods, I've found myself turning to more warming, heartier meals during my lunch breaks.

That means I've been enjoying a lot of soup—but since I rarely have time to actually craft my own soups from scratch, that can mean I often have to resort to the canned stuff. I realize that canned soup doesn't always contain the best, healthiest ingredients, but it's the easiest way to indulge in a hot, filling bowl—at least until I was introduced to True Primal.

True Primal does things a little differently, with their gluten-free, paleo-friendly approach to soups in pouches, which are just plain better than what you can find in a can. The brand sent me one of each of their flavors to try for myself, and after enjoying each and every one, I'm hooked.

True Primal's meaty, veggie-packed soups come in 16 oz. shelf-stable pouches, and every ingredient is carefully chosen to make the best soup possible. They're gluten-free, soy-free, dairy-free and paleo-friendly, including only the highest-quality ingredients, with no preservatives or artificial additives. Unlike many canned soups, they're not sweetened with added sugar, don't include any wheat, corn, rice or other grains, and include no grain flours as a thickener.

They also pride themselves on the quality of their meats. Their beef is free-range and grass-fed, while their chickens are raised on open pastures. They're never fed any hormones or antibiotics, and a number of their soups only include organic vegetables and meats. Each package also contains between 18 and 36 grams of protein.

Eight-packs of True Primal soup, available in both single flavors and variety packs, range from $49.99 to $69.99, depending on the soup, and shipping is always free.

I began my tasting adventure with True Primal's Beef & Vegetable Organic Soup on a blustery fall day. I simply tore the bag open, poured its contents into a nice big soup bowl, and microwaved it for two minutes, and I had a steaming, delicious-smelling serving of soup waiting for me (though on subsequent bowls, I added another minute, since my microwave tends to take a little longer than most).

The result was wonderful veggie soup, not just packed with great big bits of tomatoes, green beans, carrots and onion, but also sizeable hunks of beef. I was surprised at how tasty the meaty bits of beef were, and they paired very well with the tomatoey soup. It was a lot of soup, but I still ate it all up happily and looked forward to the next. 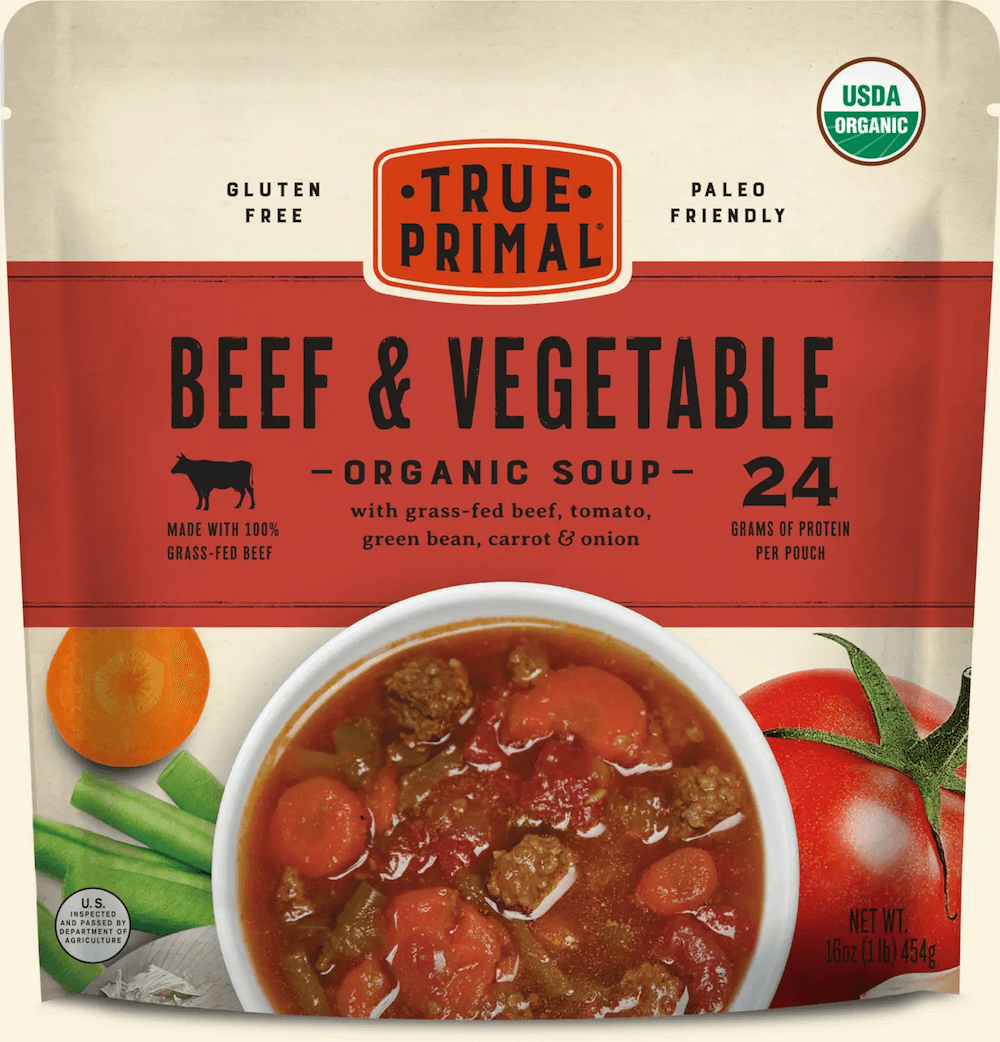 Next, it was time to try one of the chicken soups. I heated this one up the same way, in the microwave, and found that this one was a lot like a classic chicken noodle soup, except without the noodles—and with way better ingredients than what you'd find in a can. The chicken broth was rich and flavorful, especially with the addition of onion, carrot and celery, and the pieces of chicken were well-seasoned and cooked to perfection so that they were tender yet meaty. I'm slightly tempted to buy more of these and add my own noodles for the full experience—but since the brand is gluten-free and paleo-friendly, I see why they were left out! 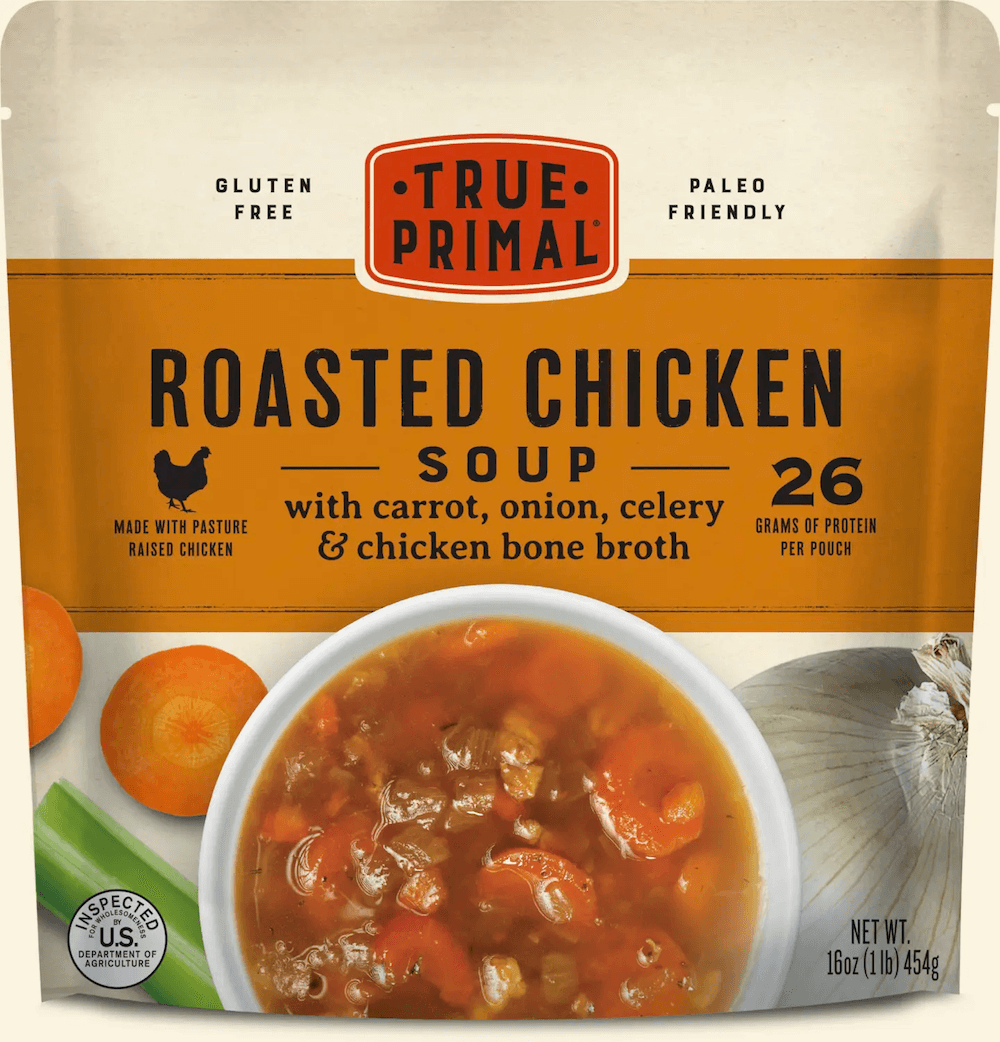 Next up was the Beef & Mushroom Organic Soup. For this one, I wasn't sure quite what to expect, but as soon as I heated it up and smelled the mixture of beef, veggies and mushrooms, it became clear it wasn't a creamy mushroom soup. Instead, this tasty soup had a warming chicken broth base, made even tastier with the mix of vegetables and spices. The meaty tastes of the mushrooms and beef came together to make for an especially savory and flavorful soup. 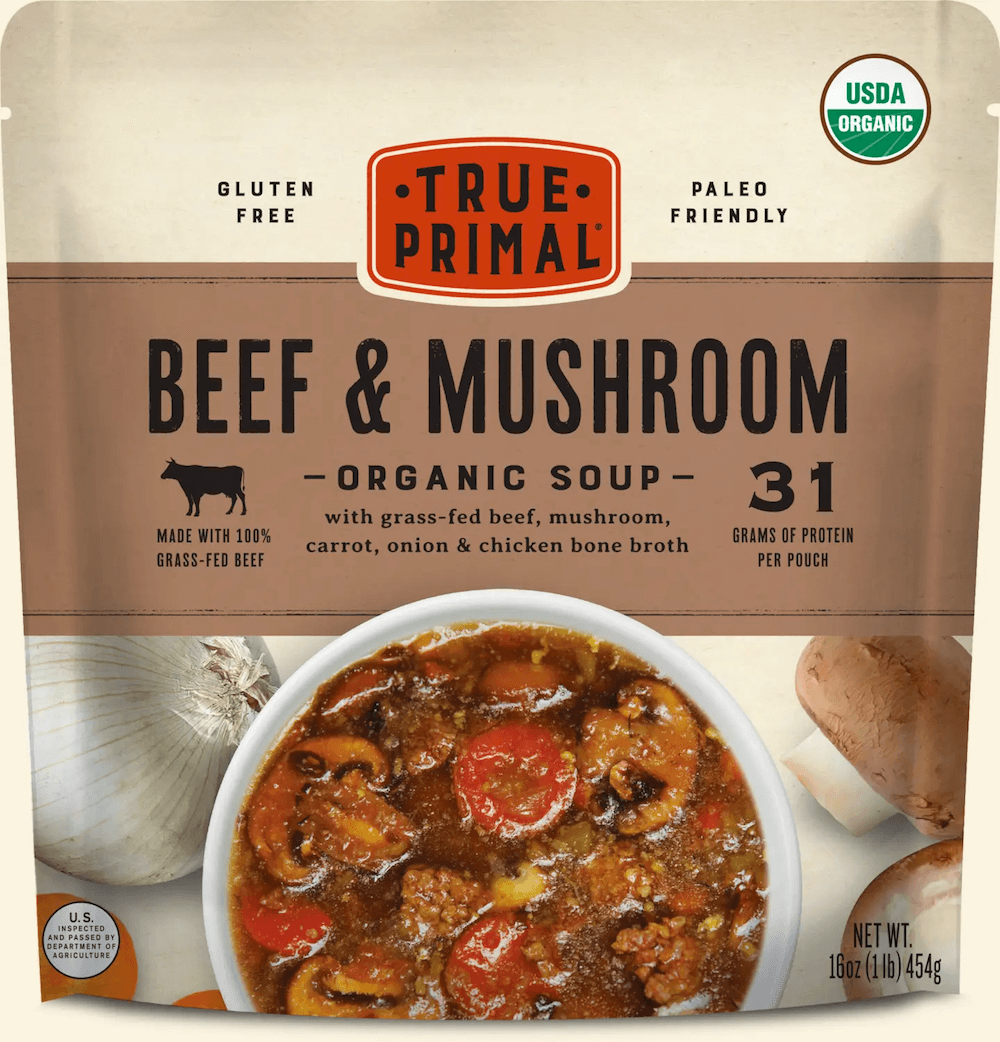 This Beef Chili was quite different from anything else in the True Primal line because rather than being a soup, it was a thick, ultra-meaty chili. I've never been the type of person to eat chili out of a bowl with a spoon, so once I heated this one up, I added a little shredded cheese and dipped tortilla chips in it for a richly seasoned snack. They really do not skimp on the beef in this one, and the addition of tomato, onion and all kinds of tasty seasonings made it perfect for dipping, though I bet it'd also be good on hot dogs, hamburgers and so much more. I was able to squeeze three meals out of the one bag because this stuff is filling, without any filler. 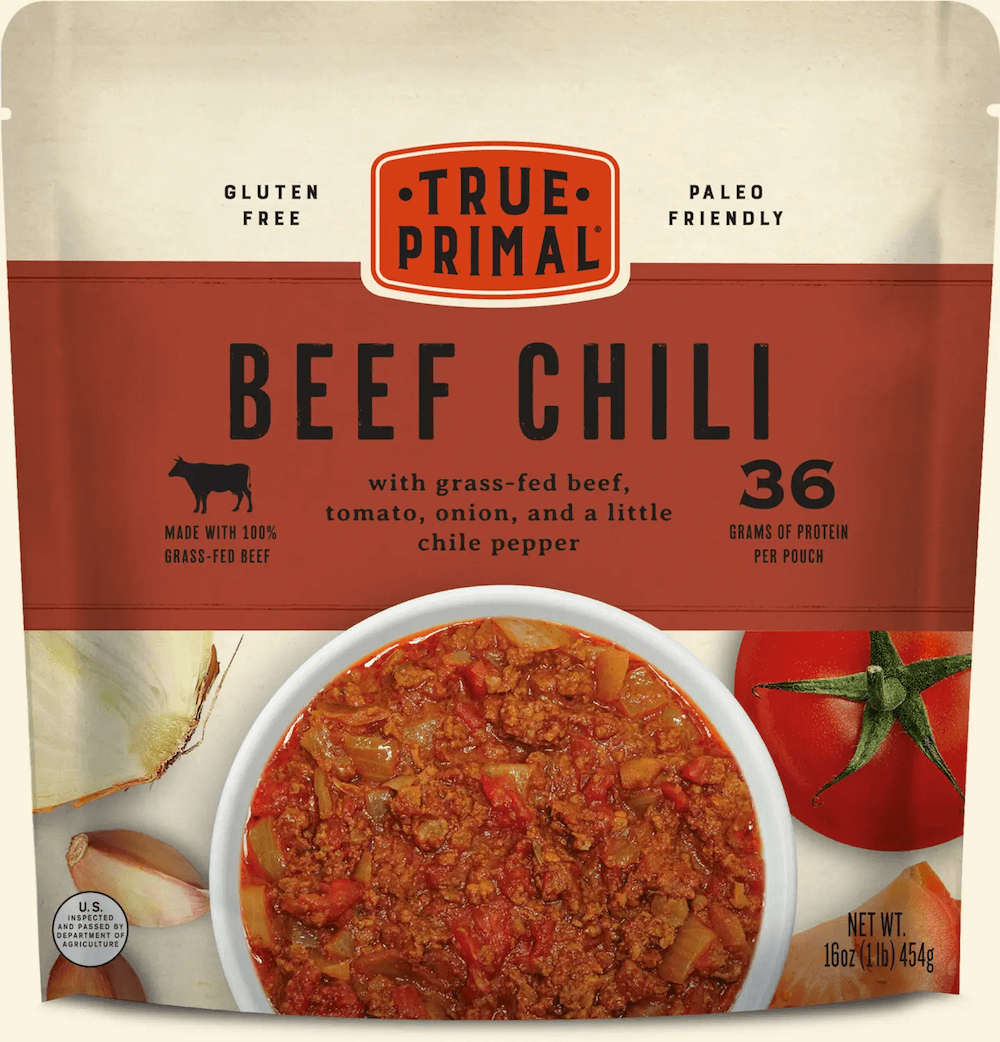 This Beef & Potato Soup looked so good on the label, and it managed to live up to all of my expectations. This one is served in a meaty beef broth, mingling with big pieces of potatoes and carrots, and complementing the thick beef chunks deliciously. This is a veggie-rich soup (and thus has the lowest protein in the collection) but also might be one of the most satisfying, and was one of my favorites to eat. 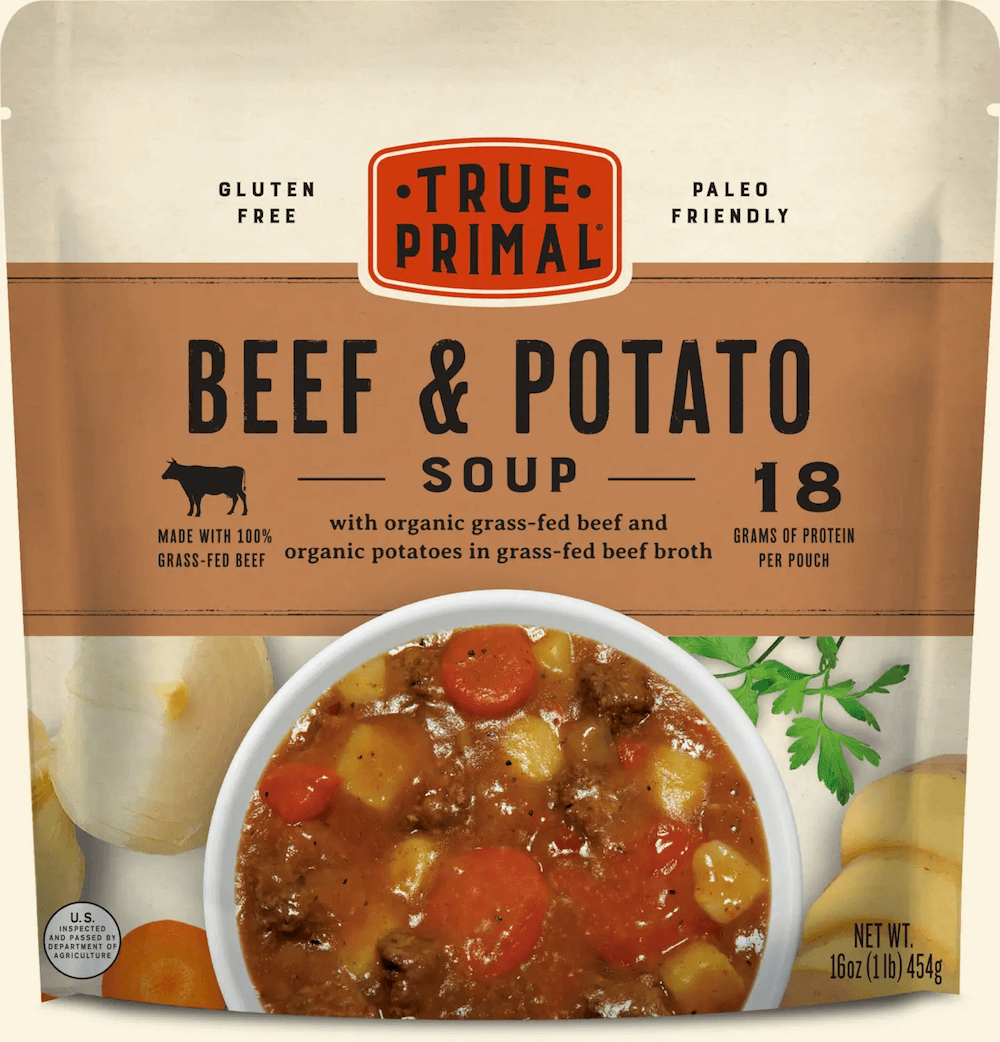 I'm not at all familiar with wedding soup, so I went into this one with an open mind, and I have to say that I am a new fan. This chicken bone broth soup is full of chopped veggies, including onions, cauliflower and spinach, and the beef pieces in the soup are the cherry on top. The flavors all meld perfectly, and now I can't wait for the next opportunity to have Italian wedding soup. 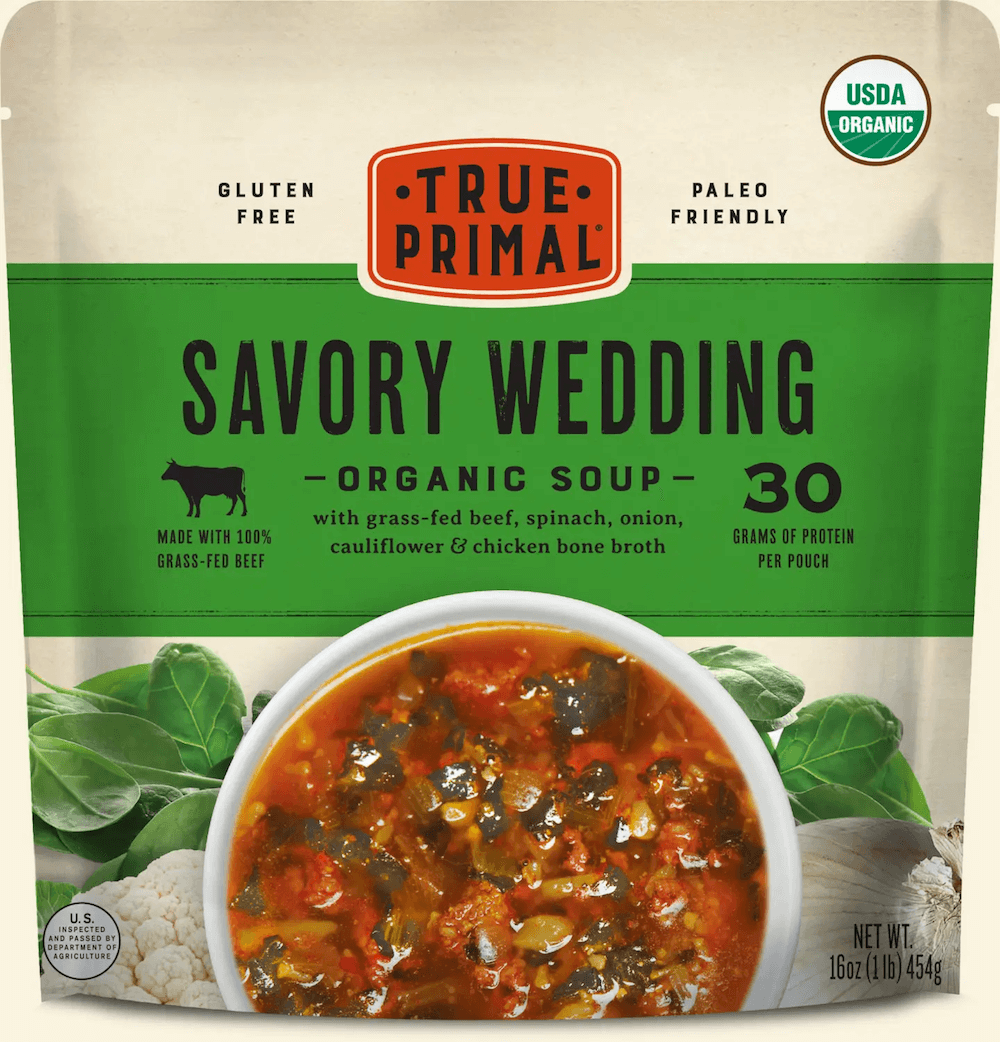 Last of all was the Tuscan-style chicken soup, which also included a number of the tasty veggies from the wedding soup to make for something utterly delicious. This bone broth-based soup has tasty chunks of chicken in addition to vegetables, including potato, onion, carrot and spinach, and it's another flavor I'd turn to again and again when the temperatures begin to dip outside. 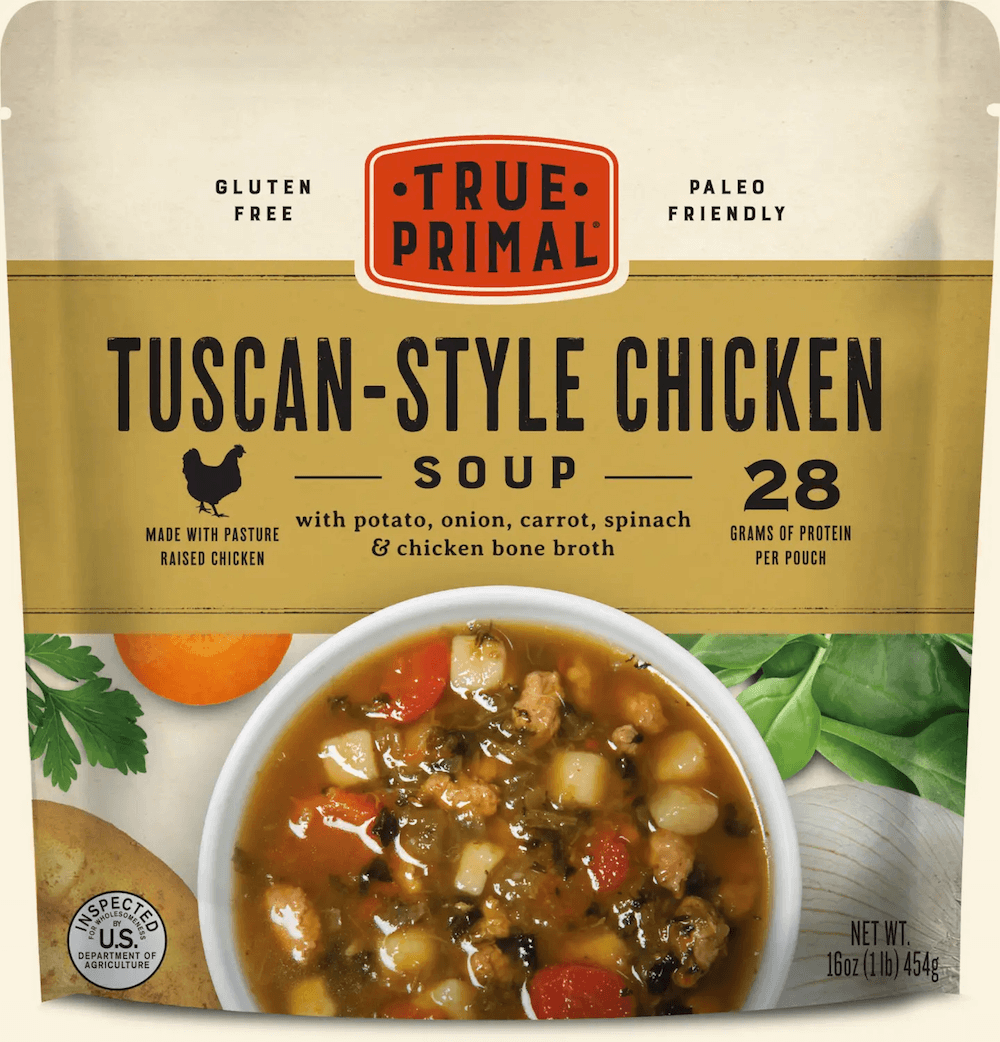 If canned soups just aren't cutting it for you, but you love soup, definitely try True Primal. Their ingredients are thoughtfully chosen to be better for you, they're packed with protein and stay fresh in their pouch, without requiring extra preservatives. Plus, the pieces of meat and vegetables are so much more substantial than what comes in a can. Of course, at between $6.25 and $8.75 per pouch, these soups are on the pricier side, but when it comes to quality, I think they're worth every penny.

Love food that's easy-to-eat, but still great for you? Click HERE to check out our review of portable Freeli Foods.