Ready to Get Invested? These 10 TV Shows Have TONS of Episodes to Keep You Busy All Summer

While some see summer as the ideal time to get outside, run around and catch the sun, others know that the lack of responsibilities and schedules make it the perfect season for binge-watching TV to our hearts' content.

But sometimes, polishing off a series within a day or two simply won't do. You want to get invested in the characters and spend as much time observing their lives as possible, so the more episodes, the better.

If that sounds like you, keep scrolling for 10 of our favorite TV shows with tons of episodes to keep you busy for a while—with specific watch times, courtesy of bingeclock.com.

Before there was the Gossip Girl reboot, there was the superior original, following the lives of wealthy teenagers living it up in New York's Upper East Side. Narrated by the mysterious blogger known only as "Gossip Girl," we get to see the juicy drama of their friendships and relationships unfold over six seasons, and the characters are in on all of it because of the salacious blog. It's currently streaming on HBO Max, and bingeing the entire series would take five days and one hour. 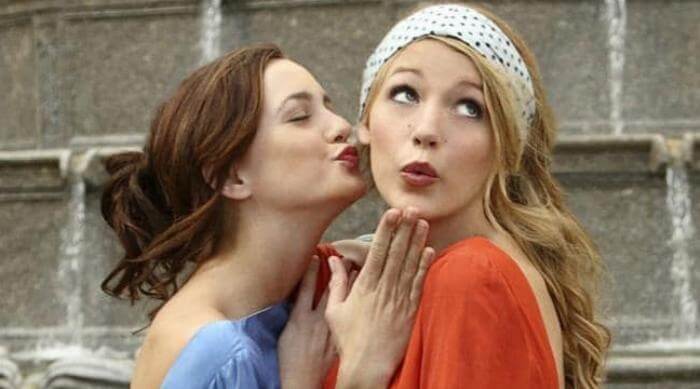 Parks and Recreation was an odd series from the very start, but that's what made it so memorable and beloved. It centers around the eccentric cast of characters working out of the Parks and Recreation department in the town of Pawnee, Indiana. While we love all the characters, there are few things better than the huge contrast in personalities between the optimistic and ever-cheery deputy director Leslie Knope and the grumpy, apathetic director with a heart of gold, Ron Swanson. It's a half-hour show, so it can be binged in about two days and fifteen hours, but that's still plenty of laughs to be had. You can catch it all streaming on Hulu. 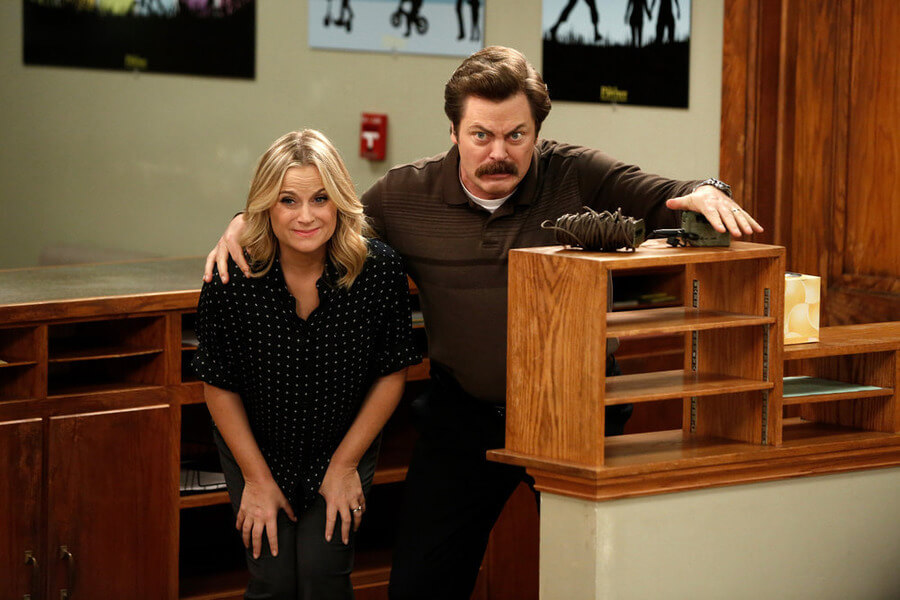 When you think of a police procedural, you don't usually expect lots of laughs, but Brooklyn Nine-Nine does this masterfully. We adore its ensemble cast of quirky cops, and the show also manages to balance a strangely wholesome sense of humor that's not quite like anything else on TV. The currently released episodes can be binged in two days, 23 hours and 30 minutes. Catch up on the series on Hulu before the eighth and final season premieres on NBC this August. 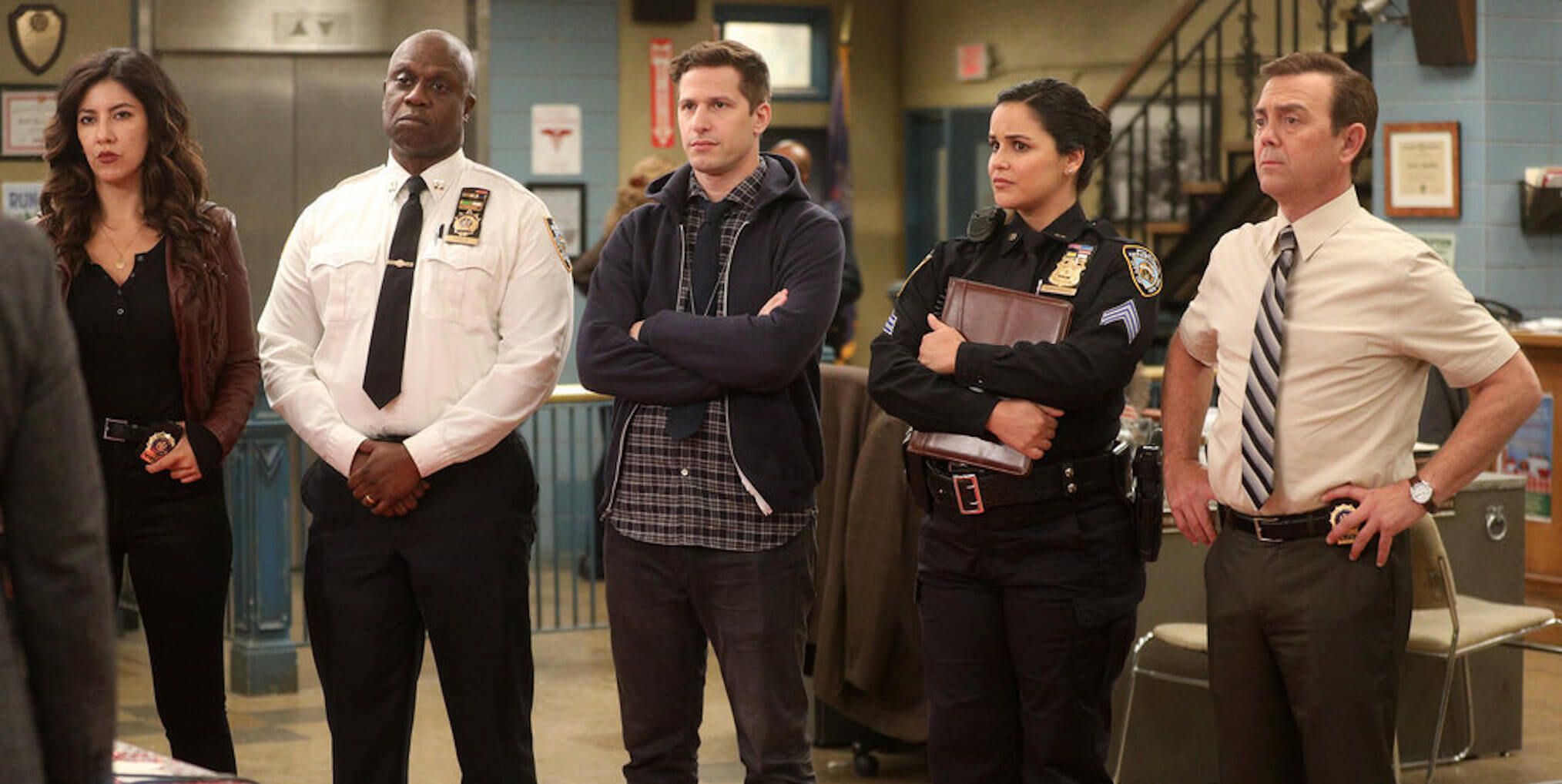 Gilmore Girls' unique style of fast-talking, pop-culture referencing banter isn't for everyone, but those who love the show absolutely adore it. With strong female leads and a story focused around a mother-daughter relationship you definitely don't see every day, it's as delightful as it is bingeable. It's all streaming on Netflix, and can be watched in a total of six days and 11 hours. 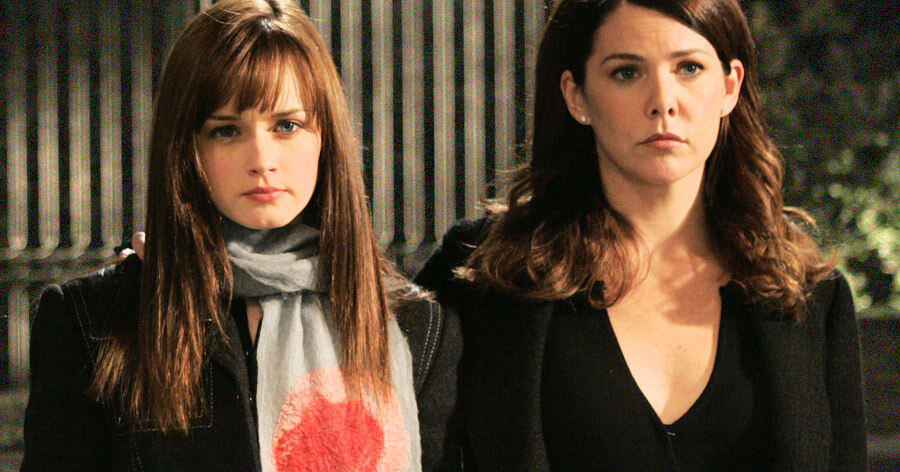 (Gilmore Girls via The WB)

Black-ish was a breath of fresh air when it first aired in 2017. The series followed the lives of the Johnson family, exploring their relationships with their race as one of the only Black families in a mostly white neighborhood, and it never became less relevant or less needed over its seven seasons. There's a good reason it had not one, but two spinoffs. You can stream it now on Hulu, and watch it all in two days and 22 hours. 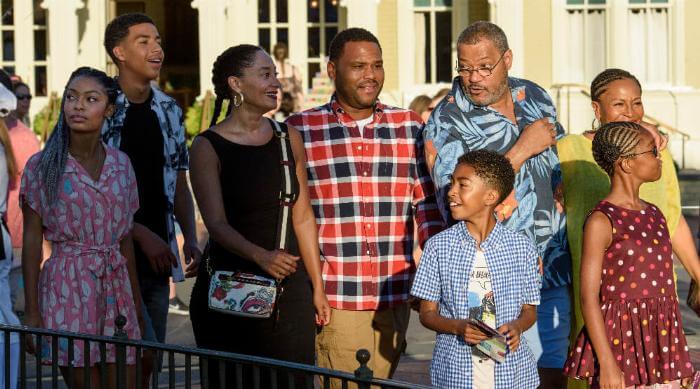 The Office has been off the air for more than eight years now, but there's a reason it remains one of the most iconic comedies of all time. It follows the office lives of the workers at the Dunder-Mifflin Paper Company, headed by the well-meaning but clueless and sometimes narcissistic manager, Michael Scott. Over the show's nine seasons, its characters grow and change, relationships are formed and the office hijinks only got more and more bizarre. Every episode is currently streaming on Peacock, and it can be binged in four days, three hours and 30 minutes. 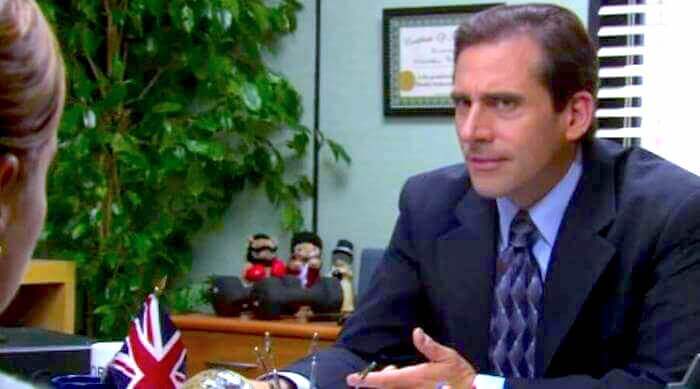 Yep—animated series can have ridiculously long runs, too, and Bob's Burgers is one of our favorites at the moment. It's a workplace comedy and a family comedy all at once, focusing on burger restaurateur Bob, his wife Linda and his kids, Tina, Gene and Louise, who all work in the restaurant with him. Thanks to a growingly bizarre cast of characters in their seaside town, there's always something strange and hilarious going on, but it's the relatable Belchers who are the heart and spirit of the show. The series, up to this point, runs for three days and 23 hours. It's also been renewed for two additional seasons on Fox, but no word yet as to when they will air. 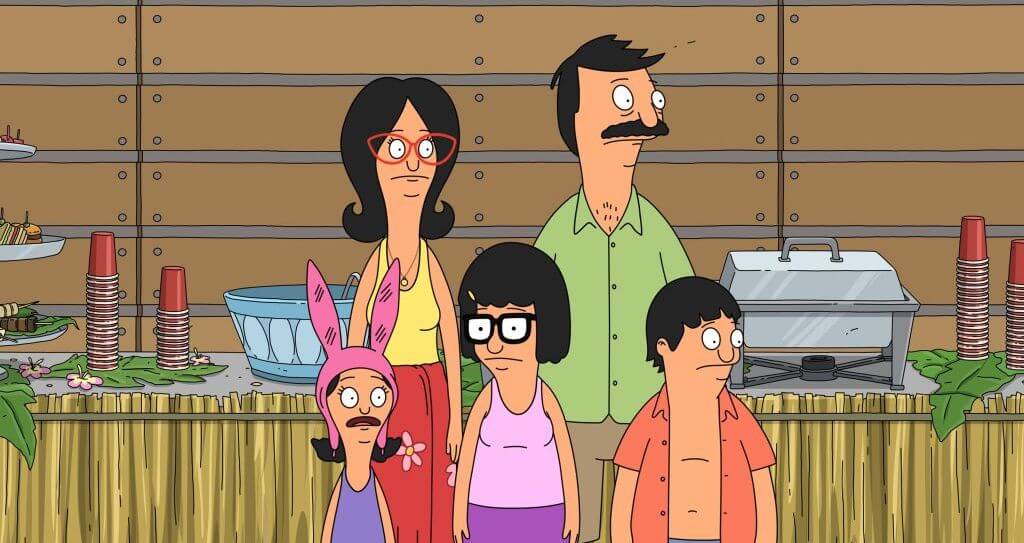 It's not much of a stretch to say that Friends is one of the most popular shows to binge-watch at the moment, and for good reason. The sitcom exploits of Rachel, Monica, Phoebe, Ross, Chandler and Joey are so essentially timeless that everyone knows their names. After all, the theme of friendship is never going to get old. It's currently streaming on HBO Max, and all 236 episodes can be binged five days and one hour. 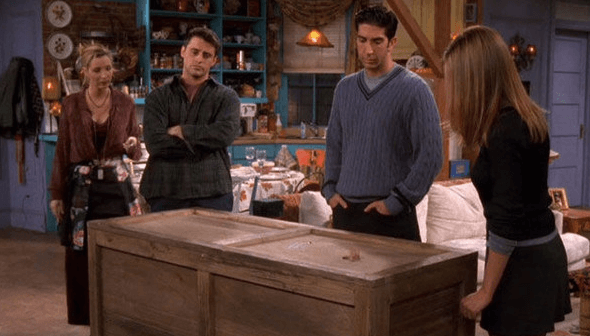 Modern Family was a very special show about one extended family and the extensive and varied ways in which family can exist and love each other, but maybe the most special thing about it was seeing the family grow together over the course of 11 years. If you want to see people you care about grow up right before your eyes, this is the one to watch. Catch it on Hulu, where it will take about five days and five hours to binge watch. 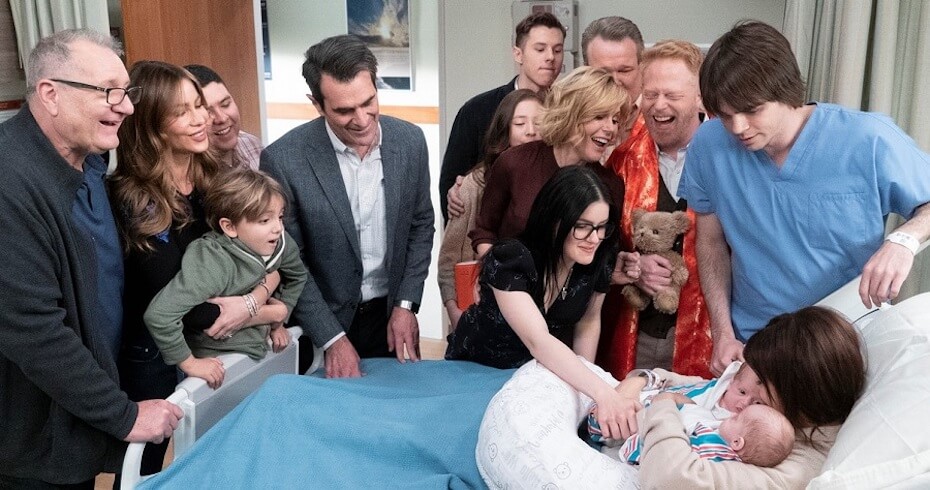 If you really want to get lost in a show for weeks at a time, we have to recommend Grey's Anatomy, which has been on for so long it's practically a meme at this point. This time-honored series revolves around the very messy lives of the doctors working in a Seattle hospital, where there's more drama due to affairs and strained relationships between staff than with the actual patients. Finishing the first 17 seasons, all streaming on Netflix, will take a whopping 15 days and three hours. But that's not even where it ends. Season 18 begins in September, and will air on ABC. 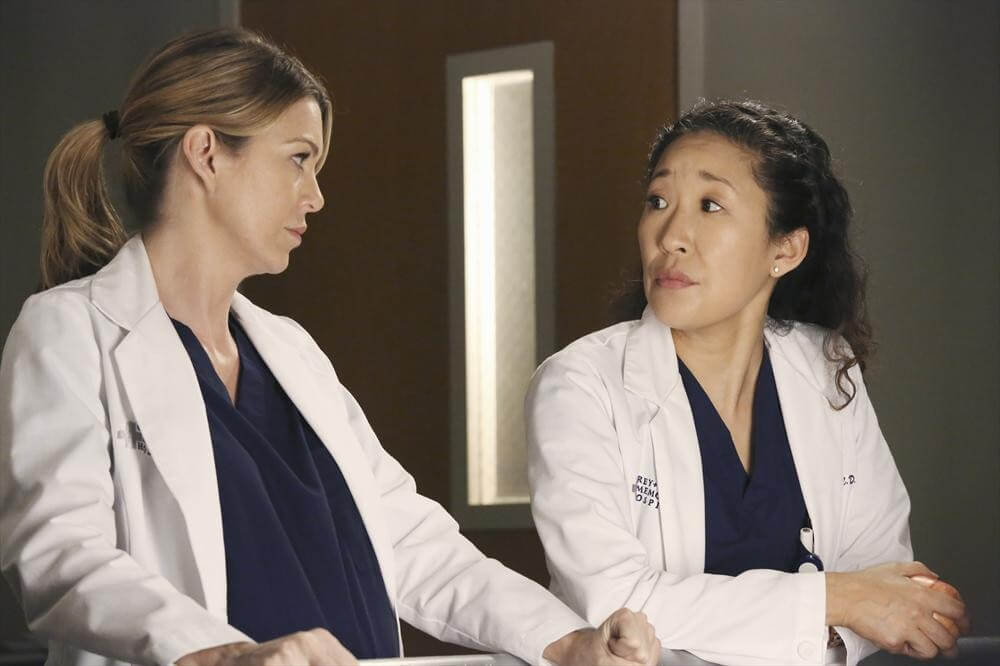 Don't have all the time in the world? Click HERE for some shorter, summer-themed TV shows you can also binge this break.