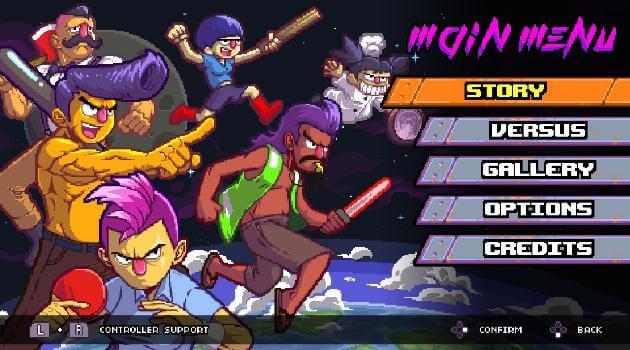 The new release from Mojiken Studio places players in the middle of an epic sports competition spanning the entire Milky Way, combining classic fighting game mechanics with something like the brick-breaking Breakout to create something like I've never seen before. I was provided with a review code of the game and was keen on booting it up to see what it was all about. I wasn't disappointed.

A typical round of Ultra Space Battle Brawl begins with one player on either side of the arena. Each player faces their opponent defending a crystal, which sits behind protective layers of "Minions"—little bird creatures that share haircuts with the character on their team. 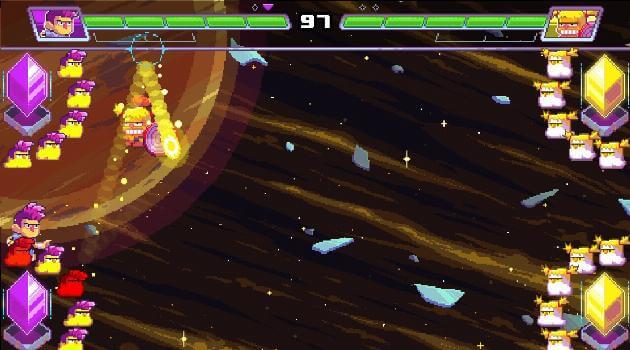 The round begins with a ball in the center of the screen, and each player's goal is to take control of that ball, hitting it at the Minions to get rid of them and clear space in order to hit and destroy the crystal. Levels take place across the solar system, and the configuration for your Minions and crystals is different depending on whether you're above Earth or Saturn or Mars. Five hits to your crystal, and you lose the round.

Like Street Fighter and other classic fighting games, whoever wins two out of three rounds first is the crowned the victor. This may sound easy enough, but it can quickly descend into (extremely fun) chaos, and that's particularly true with four players on the screen instead of two.

It helps that the game's controls are extremely simple. You move with the control stick, whack the ball with one button, and dash across the screen with another. The angle and direction of the ball depend entirely upon your timing and where you hit it from. Each player also has an Ultra meter, and when it fills up, they can use their Ultra move, a special ability that's unique to each character.

And the characters are essential to USBB. There are 10 in total, and each one has their own special moves and stats, as well as their own story for why they're competing in the tournament. You can play through the eight-level story mode to learn more about their motivations, but don't let the number of stages fool you, because the challenge escalates fast. 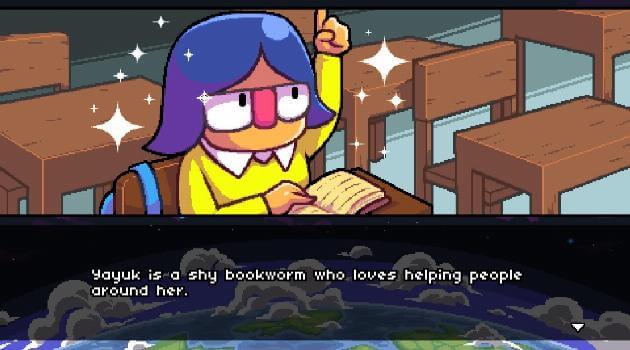 The character stats include power, speed, attack range and attack speed, and they make the different characters handle very differently. The default is the shirtless, bat-toting Djarwani, who is the most balanced character in the game, but I recommend playing with every character to see what feels best to you.

I naturally gravitated toward Yayuk, an awkward bookworm with glasses who I felt I could easily relate to. Her Ultra, the Wall of Knowledge, creates an impenetrable barrier that slowly moves toward the opponent across the screen, which came in handy each and every round. However, her power is one of the lowest in the game, and as I neared the end of the story mode, I was quickly getting decimated by my opponents. 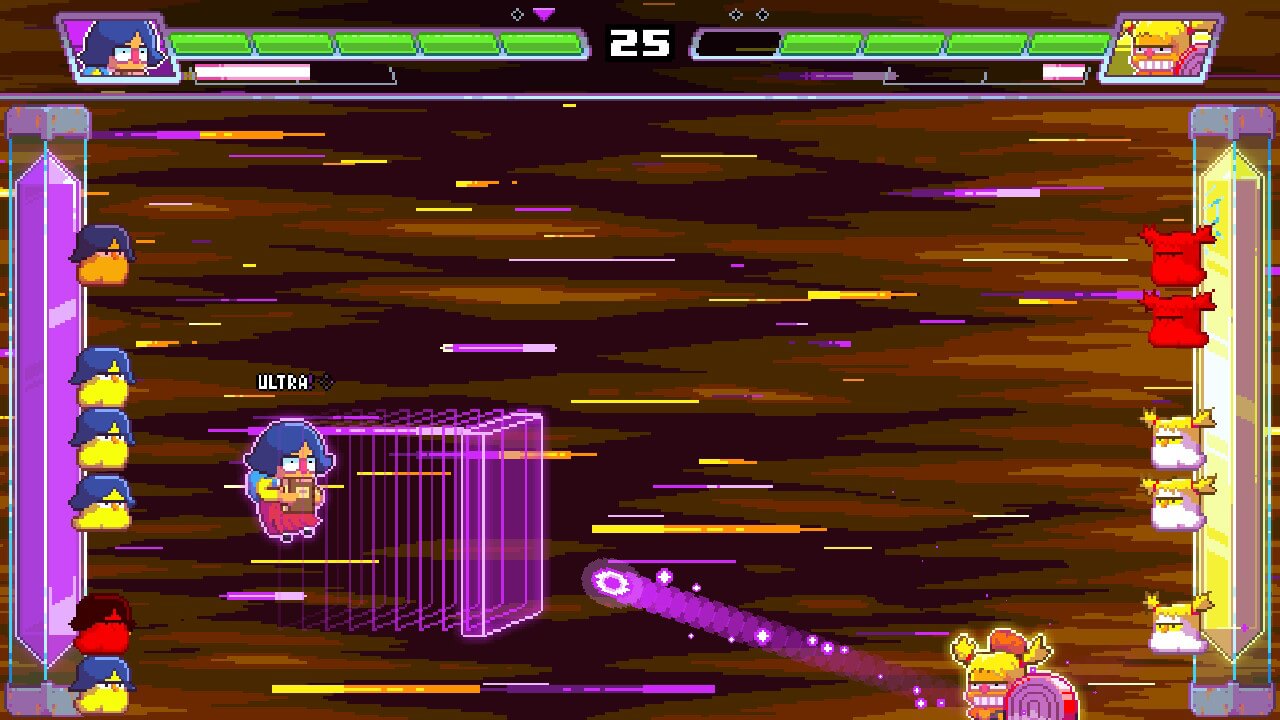 Since then, I've become obsessed with the high-powered Tumini. The pint-sized chef hits the ball with a frying pan, and though it takes her a while to rev up to hit the ball, her swings land hard. Her extremely handy Ultra is called Minion Snatcher, stealing the opponent's birds one by one and placing them in front of her own crystal. 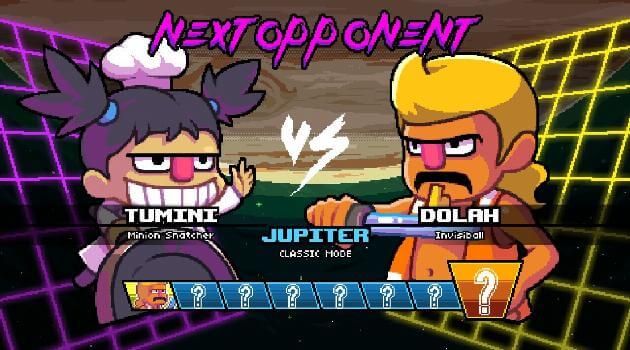 But I'm still not positive I've landed on the perfect character for me, because once the story mode introduces multiple opponents at once, I really begin to struggle. After multiple hours with the game I've yet to finish the story mode with any character.

The game's page of Nintendo's website calls USBB "easy to learn but hard to master" and it's true. It's tough, and I think it'll take many more hours for me to have mastery over the game. There are no difficulty settings, so in order to see more of the game, I'll simply have to get better. 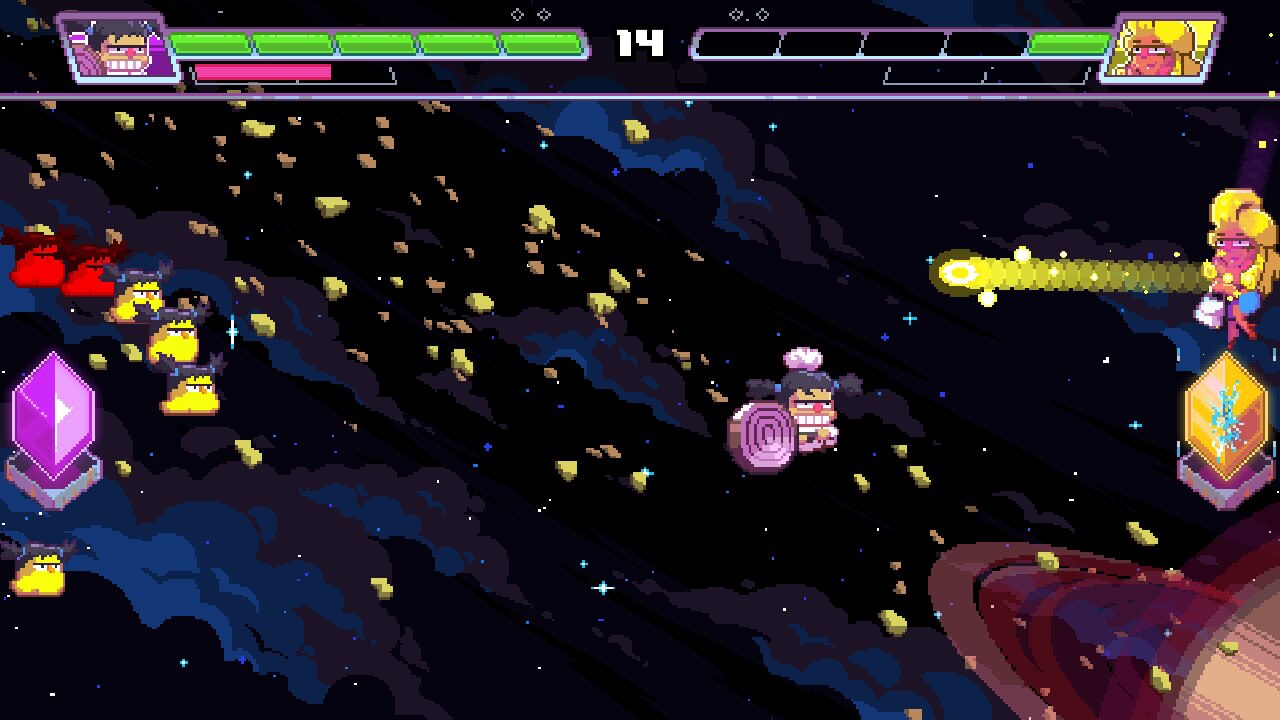 Until then, I'll continue practicing in the story mode and playing against friends in the versus mode, which is just as compelling. It's a great game for parties and playing side-by-side with friends on the couch, and you can compete with up to four players to maximize the fun. The high-speed antics of the game can make things a little hard to keep track of (especially when the Switch isn't docked) but that's kind of the point and makes the game that much more exciting to play.

And on top of being a blast, the game looks and sounds incredible. The pixel art style is colorful and bold without looking like every other pixel game out there, and the soundtrack will get your heart pumping, sounding like a retro vision of the future.

Ultra Space Battle Brawl won't change your life, but it will definitely keep you entertained and challenged—particularly if you decide to play with pals. No other game has made me mash the buttons on my Switch as furiously as this one, and I don't intend to quit until I've beaten that darned story mode at least once.

USBB is available now for $14.99 in the Nintendo eShop, and if you're still not sure about it after reading this review, check out the video below, as well as the free demo available now on the Switch.

If you're seeking more inexpensive games for the console, click HERE to find out why you need to own Hollow Knight on the Nintendo Switch.