Umi Garrett is a 13-year-old pianist from Orange County, California, who has won awards across the world for her brilliant piano playing. 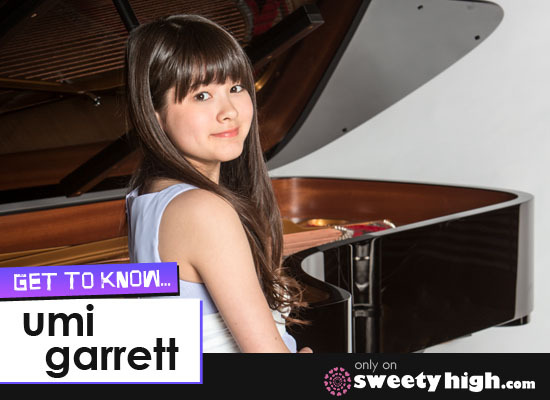 We recently spoke with Umi about how her skills developed, and about which moments have been the most important in her career!

Umi Garrett started playing the piano when she was just 4 years old. She has now been playing for more nine years.

"None of my family members are musicians, so it's just me," she said.

Umi has been called a prodigy in publications like the Huffington Post and on The Ellen DeGeneres Show, but Umi shies away from that label.

"I don't really consider myself as a 'prodigy', but I work very hard and really love playing the piano," Umi said. "I actually think I'm more of a pianist than a prodigy."

She was just 8 when she started taking home first place prizes in piano competitions. That year, she also had the opportunity to appear on The Ellen DeGeneres Show.

"It was really fun!" she said. "Ellen was really nice and funny, and it was a great experience."

But Umi doesn't think that playing the piano should be about competing.

"I'm actually not fond of competitions, since I think music is for enjoying, not seeing if someone can play better than others," Umi said. "It feels good to win, but I personally like it better when I play a concert and the audience is happy and enjoys the music I play."

"They are amazing pianists and great inspirations for me," she said.

Currently, her favorite song to play is the Chopin Scherzo No. 1.

"It's really fun, and the term 'Scherzo' actually means 'joking,'" Umi explained. "It has lots of technical, fast, and exciting passages, as well as sweet and beautiful moments and melodies. It's a great piece for the performer and the listeners."

Though Umi only performs classical music on the piano, she also loves to listen to pop.

When Umi isn't playing the piano, she enjoys reading, drawing, watching movies and playing games with her friends.

She told us that she learned in a valuable lesson in March of 2013 when she visited the Tōhoku region in northern Japan. She was there to play for people who had suffered in the tsunami and earthquake that struck the area in 2011.

"I learned that music is more beautiful when it is played for someone else, rather than yourself," she said.

We can't wait to hear more from Umi as she continues her musical career!

Check out her social channels below, and be sure to join us at Sweety High and share what you're passionate about!